The Oprah interview was an emotionally manipulative performance designed to consolidate Harry and Meghan’s power. 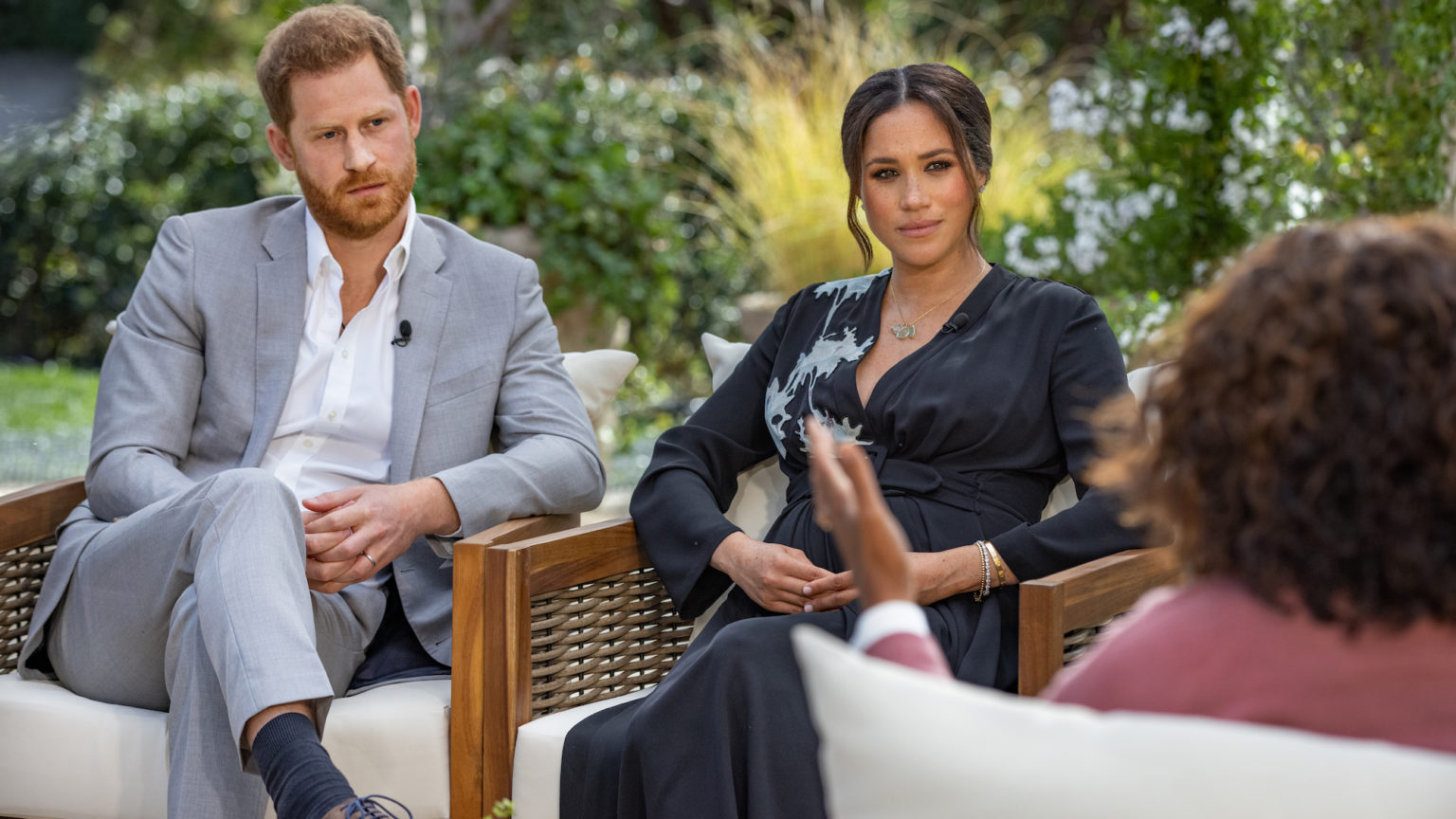 Well that was explosive. Even more than had been expected. In their two-hour sit-down with Oprah Winfrey, Harry and Meghan drove a long knife into the monarchy. They implied that it’s a cold, cut-off, racist institution that is so bereft of basic human feeling that it drove a young-ish sensitive woman – Ms Markle – to contemplate suicide. It was Diana’s chat with Martin Bashir on steroids. A clash of royal houses worthy of a George RR Martin story. It was also a grotesque spectacle – emotionally manipulative, self-obsessed, and a clear attempt by Harry and Meghan to position themselves as the king and queen of victim politics.

The set-up bordered on nauseating. Here was a duke and duchess in the unimaginably luxurious surrounds of a Californian mansion talking about how difficult their lives have been. In a country where 40million people lost their jobs as a result of lockdowns, this pair who get paid millions for making naff podcasts moaned to billionaire Oprah Winfrey about their oppression by the establishment. Meghan was wearing a $4,500 dress. She’ll probably never wear it again. That’s more than twice the amount that desperate Americans will get in their stimulus cheques to keep them afloat in the next few months. It’s perverse.

Then there’s the hypocrisy on the privacy question. Harry and Meghan detest the invasive media – they referred to it as a ‘monster machine’ – and insist they just want a private life. Yet they’re constantly revealing all. They’ve given us minute details about the miscarriage Meghan suffered. In the Oprah chat Meghan opened up about her suicidal thoughts while ‘trapped’ in the royal family. Nobody invades Meghan Markle’s privacy as much as Meghan Markle does. The problem isn’t us, the grubby, tabloid-reading public, pestering Harry and Meghan for info about their lives; the problem is them forever foisting their most intimate experiences down our throats. How about you leave us alone?

But there’s something else going on, too, something that goes far beyond Harry falling out with his dad or Meghan vs Kate. More fundamentally we’re witnessing a culture clash. A conflict between the contemporary cults of victimhood and identity politics, as now keenly represented by Harry and Meghan, and the older ideals of duty, self-sacrifice, stoicism and keeping your shit together, as embodied by the queen, and as aspired to by most Brits in recent decades. This internecine clash between the Sussexes and the Palace is really an unspoken civil war between post-Diana New Britain and Old Britain. Last night’s interview, facilitated by that doyen of the new elites, Oprah, was essentially a power grab by Harry and Meghan – their attempt to seize the throne of the victim industry and consolidate their cultural power in the post-traditional world.

There is no question that the Oprah interview represents a serious blow to the monarchy. It will badly damage the monarchy’s international reputation, which had held up pretty well even during the divorces, scandals and anni horribiles of recent decades. The interview will contribute to the chipping away of the monarchy’s sense of mystery. The monarchy’s great power traditionally lay in its ability to insulate itself from the external world, to depict itself as being above the flotsam and jetsam of changeable daily life. But that has unravelled in recent decades. The pressures of mass media, social media and, more importantly, the now dominant culture of revelation, of always signalling one’s virtue and advertising one’s wounds, have slowly pushed at the doors of the once mysterious palace.

Princess Diana, of course, played a key role. She was a lightning rod for the late 20th-century victory of emotionalism over stoicism. Who can forget the explosion of takes following her death in 1997? From the broadsheet media, academia and Downing Street itself, then inhabited by Tony Blair, the cry went out: Diana represented a New Britain. One that was more in touch with its feelings. One that worshipped at the altar of the self rather than bending the knee to the demanding, stressful call of public duty. Meghan clearly sees herself as continuing the Cult of Diana’s work, as heir to the victimology and studied ‘authenticity’ that Diana came to represent.

This is why she namechecked Diana in the Oprah interview. She, together with Harry, of course, aspires to embody the cultural power that was invested in Diana by the new elites. But in an even more intensified form. Now it won’t only be the cult of victimhood and emotionalism – there’ll be identity politics, too. Witness Meghan’s vague, unsubstantiated reference to a member of the royal family wondering how dark her son Archie’s skin would be. We have no idea whatsoever if this was an innocent, curious comment or an openly racist one. I suspect very much it was the former. But it instantly gets folded into the narrative that best serves Harry and Meghan’s power grab – the narrative of their being ‘victims’ of the old establishment, of the culture of racism, of the ‘colonial undertones’ of the modern media, as Harry put it, which is rich coming from someone who took part in the occupation of Afghanistan.

The Oprah chat came wrapped in blather about Meghan telling ‘her truth’. In reality this was a coronation of two leading members of the neo-aristocracy. Harry and Meghan have successfully positioned themselves as key figureheads of the new feudalism in which cultural power resides in the hands of small numbers of very wealthy people around Silicon Valley and Hollywood, and in which the little people’s role is to receive moral instruction from the likes of Facebook, Netflix, Oprah, Harry, Meghan… That’s the great irony of Harry and Meghan juxtaposing themselves to the monarchy, and being witlessly cheered on by the left for doing so: these two behave in a far more old-world monarchical fashion than the queen does. Their punishment of the disobedient media; their conviction that they must instruct the rest of us on how to live, how to travel, how many kids to have; their eye-wateringly arrogant mission of ‘building compassion around the world’ – they make the actual British monarchy, politically neutered by centuries of political progress, seem positively meek in comparison.

What we see in Harry and Meghan is the strange, contradictory power of the victim industry. Power today often comes wrapped in claims of suffering. Publicly professed weakness is a precursor to dictating to everyone else that they must open up, change their attitudes, become more ‘aware’. Victimhood is the soapbox from which the new elites, whether lip-trembling politicians or ‘suffering’ celebs, presume to instruct society at large about the right way to think, emote, feel, be. This is why Meghan’s confession of suicidal thoughts was so important. It felt manipulative. It was in essence a declaration of emotional authenticity. Meghan has the right kind of emotional history to inherit the crown of the post-Diana world – that was the message.

Even a republican like me can see there is nothing progressive in the current rage against the palace. That there is nothing to celebrate in the shift from a world of self-control and stoicism to one of incessant self-revelation, and from a democratic era in which the power of monarchy had largely been curbed to a new, woke feudalism in which a select few wield extraordinary cultural influence over the rest of us. These developments harm the freedom of the mind and our sense of moral autonomy, by always cajoling us to bow down to the cult of emotionalism, and they shrink the space for open, democratic debate by investing so much power in the woke feudalists of Big Tech, NGOs, the Oprah set, and so on. Harry and Meghan aren’t fighting the establishment; they are the establishment now. Meet the new aristocrats, even worse than the old.