Experts in the US are calling for the creation of a Reality Czar. They mean a Ministry of Truth. 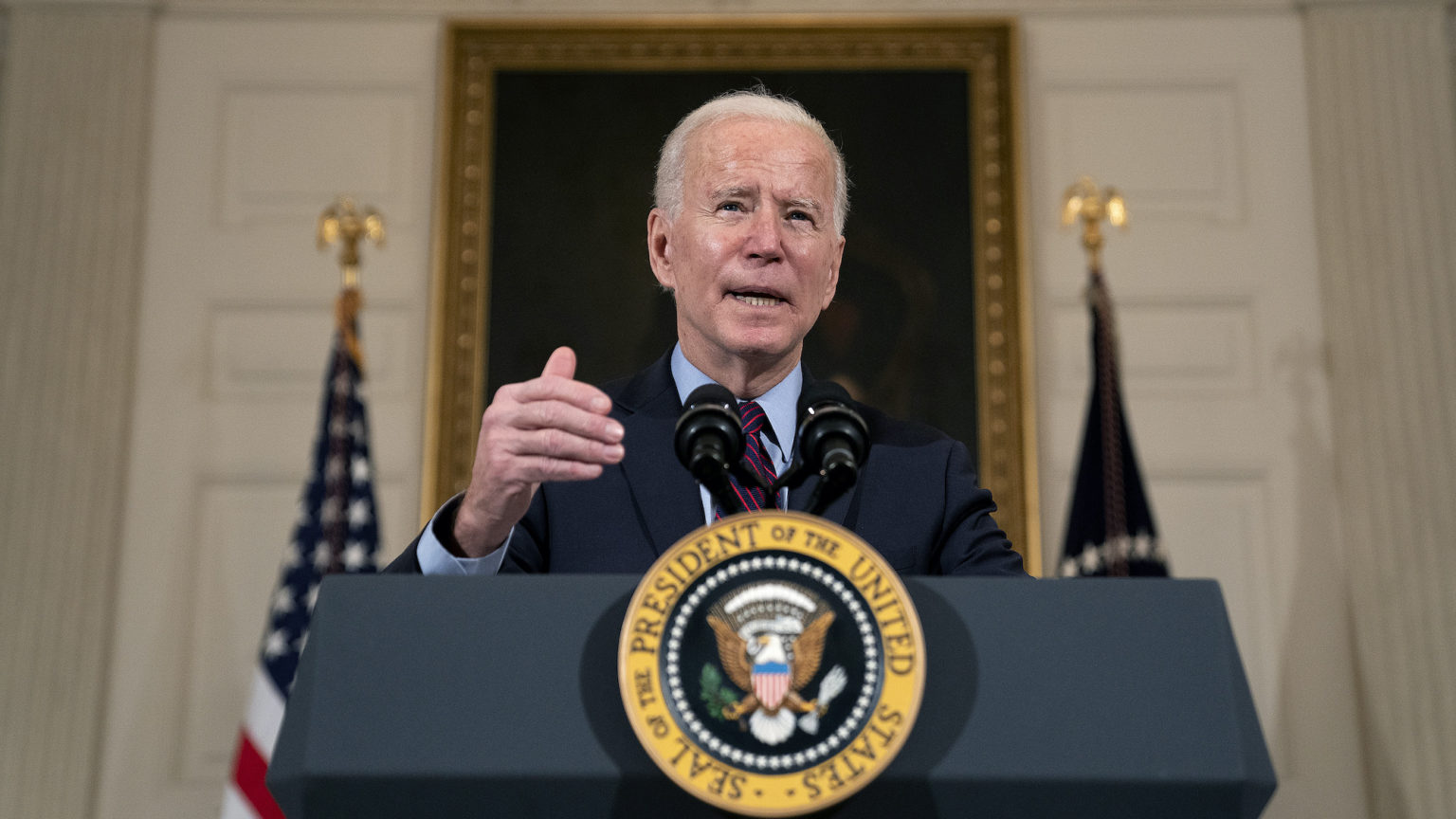 At first I couldn’t believe what I was reading. A writer for the New York Times was enthusiastically supporting a call made by ‘several experts’ around the Biden administration to create a Reality Czar. Apparently, a Reality Czar is needed to counter the campaign of disinformation being pushed by bitter conservatives.

The NYT commentator concedes that giving someone the authority to pronounce on what is and isn’t real ‘sounds a little dystopian’, but suggests it is warranted by the threat of ‘disinformation and domestic extremism’. The experts promoting the enthronement of a Reality Czar are unapologetic advocates of giving the government the power to decide what is true, what is real. They hope that the establishment of a reality task force ‘could become the tip of the spear for the federal government’s response to the reality crisis’.

The NYT is not alone in demanding that the government take an active role in determining what is true. Recently, New York University’s Stern Center for Business and Human Rights published an alarmist report about the allegedly distorted perceptions held by millions of conservatives. Apparently, huge numbers of conservatives wrongly believe that their views are suppressed by digital platforms on partisan grounds. To prevent this view from gaining greater influence, the authors of the report call on the government to set up a ‘new Digital Regulatory Agency’. No doubt this agency would become another tip of a spear to be hurled at anyone who accuses the giant social-media companies of showing bias against the political right.

The principal aim of the Stern Center’s report is to restore trust in the moral authority of the mainstream media in the US. It fears that millions of Americans no longer trust the media as a reliable source of information because they have bought into the belief that it is biased. It argues that people’s distrust of the media and their ‘wrong’ belief that social media are biased against conservatives will escalate in coming years, especially as social-media companies increase their ‘fact-checking’ operations.

‘Disinformation about bias contributes to the delegitimisation of the platforms at a time when they’re actually experimenting with more aggressive forms of fact-checking and content moderation – not just in the case of Donald Trump, but also in connection with falsehoods about Covid-19 vaccines and conspiracy theories like QAnon.’

Since the invention of the modern media people have put forward critiques of its sometimes biased nature. That has been a fairly unexceptional feature of the cultural landscape. Yet now, would-be Reality Czars have rebranded such criticisms as a ‘false narrative’ and an example of ‘political disinformation’. When claims of media bias are denounced as a form of malevolent disinformation, it can only be a matter of time before such claims are criminalised.

One of the aims of the current campaign against disinformation is to legitimise and normalise the policing of media content. Campaigners uphold the absurd and long discredited idea of media neutrality in order to discredit alternative accounts about what the media are doing and what the social-media giants are up to. But they also want to go beyond protecting the reputation of Big Tech. Some now want nothing less than to establish a government agency that would act as the infallible source of truth and reality.

One of the experts cited by the NYT suggests the Biden administration should set up a Truth Commission. No doubt anyone who questioned the biases of a Biden-led Truth Commission would be written off as a dangerous extremist peddling disinformation.

This all raises a very important question – who gets to decide what is real?

Even at the best of times, one should approach media outlets and news sources with a critical mindset. In the current era – with the flourishing of fake news and conspiracy theories – it can be challenging to distinguish between fact and fiction. The real problem is not that the media peddle lies, although they do do that sometimes. No, the problem is that politically motivated opinion now masquerades as news. Moreover, in our intensely polarised political and cultural environment, the usual checks and balances that help to maintain a modicum of objectivity have become ever-more feeble.

Cultural polarisation has led to a situation in which there is an unprecedented lack of consensus about the realities facing society. As a reader of numerous newspapers and online publications, I am struck by how many contrasting truths and versions of reality I encounter on a daily basis.

When I want to engage with a narrative that calls into question my reality and lived experience as someone who lives in the UK, I turn to the New York Times. One of its recent headlines struck me as a classic example of disinformation. It said: ‘Britain’s Ethnic Minorities Are Being Left for Dead.’ Any reader of this fantasy story would strongly believe that Britain is an unusually malevolent society. This invented reality of Britain as an almost evil country is part of a broader pattern at the NYT. The paper always seems determined to present British society in the worst possible light. ‘Britain is undergoing a full-blown identity crisis’, gloated a reporter recently, before adding that it is a ‘hollowed-out country’, ‘ill at ease with itself’, ‘deeply provincial’, and engaged in a ‘controlled suicide’.

A truly objective Reality Czar would surely have to busy him or herself with challenging the NYT’s questionable depictions of 21st-century Britain. However, it would be just as wrong for a government-appointed Ministry of Truth to give its verdict on the NYT’s campaign of disinformation against the UK as it would be for it to make pronouncements on those who claim that social media are biased against conservatives.

For centuries, advocates of democracy, tolerance and freedom of speech have upheld the belief that government should not be in the business of dictating a doctrinal version of The Truth. Nor should government try to direct or suppress people’s beliefs and views. This conviction helps to protect freedom of speech in American society. As the legal scholar Steven Gey argued, under the liberal interpretation of the First Amendment ‘it is much easier to defend the protection of speech, because the government is robbed of its usual justifications for suppressing that speech’.

Whenever the state is given the power to identify or enforce a ‘particular version of right and wrong, truth and untruth’, the freedoms of belief, expression and speech are in serious trouble. The establishment of a Reality Czar and, in effect, a Ministry of Truth would deprive people of the right to determine what they hold to be true. One of the privileges of a citizen in a democracy is that they have both the right and the duty to participate in truth-seeking. Truth is not something handed down to us from on high; it is something we acquire through deliberation and debate.

Underpinning the idea that officialdom should have the authority to pronounce on what is true and what is real is a view of ordinary people as lacking the moral and intellectual capacity to behave as independent-minded citizens. A Reality Czar would not simply explain ‘the truth’ to people – he or she would also seek to alter how misguided people conceive of reality. One of the experts cited by the NYT in its call for a Reality Czar argues that helping the misguided to see the light is a ‘public-health issue’. In other words, those who believe that there is media bias against conservatives, or who believe other things that the NYT and Biden-supporting experts disapprove of, are not only wrong but also sick.

The NYT piece suggests that those who possess hardcore dissident views should be targeted with ‘messages about mental health and mindfulness’. So, the preferred method of these reality police is not to find the truth through argument and debate, but rather to use the paternalistic, soft-totalitarian measures of psychological manipulation to alter people’s view of reality.

Whatever the problems with fake news and disinformation today, the campaigns against these things are a far greater threat to freedom and democracy. These are not disinterested campaigns seeking to uphold the truth. Rather, they aim to defend the moral authority of media platforms from public suspicion and mistrust. And through portraying dissident opinion as a threat to society, they also create a fearful climate that will be more hospitable to media censorship.

The campaign against disinformation is really about policing and censoring the views of millions of people who rightly or wrongly believe they cannot trust the media. It is becoming more and more common for experts and others to say that dissident views are akin to Flat Earth theory and other conspiracy theories. This campaign of delegitimation is likely to continue and intensify.

Zealous campaigns for censorship used to be confined to university campuses. But more recently, especially following the outbreak of the Covid pandemic, calls for the policing of communication and speech have gone mainstream. The return of old-fashioned media censorship is as worrying as the campaign of Biden supporters for the state to become the arbiter of truth.

The fundamental premise of a free and democratic society is that the truth is arrived at through political struggle and debate. No one explained this view with more clarity than the liberal political theorist, John Stuart Mill. In his powerful essay On Liberty (1859), Mill said that censoring someone’s views is always wrong, even if those views are false. Why? Because society’s knowledge and understanding evolve through the ‘collision’ of truth with ‘error’.

In a world where falsehoods proliferate, free debate is more important than ever to help people learn for themselves what is real. Mill understood that placing limits on freedom of speech constitutes a far greater threat to democracy than the erroneous views promoted by conspiracy theorists and fake-news entrepreneurs. Because once the authority of free speech is undermined, then public life itself is threatened, as people come to be deprived of the opportunity to discuss, debate and clarify the issues that confront our society.