Mark Drakeford: the failings of an authoritarian windbag

The Welsh government has combined inadequate healthcare with harsh lockdowns. 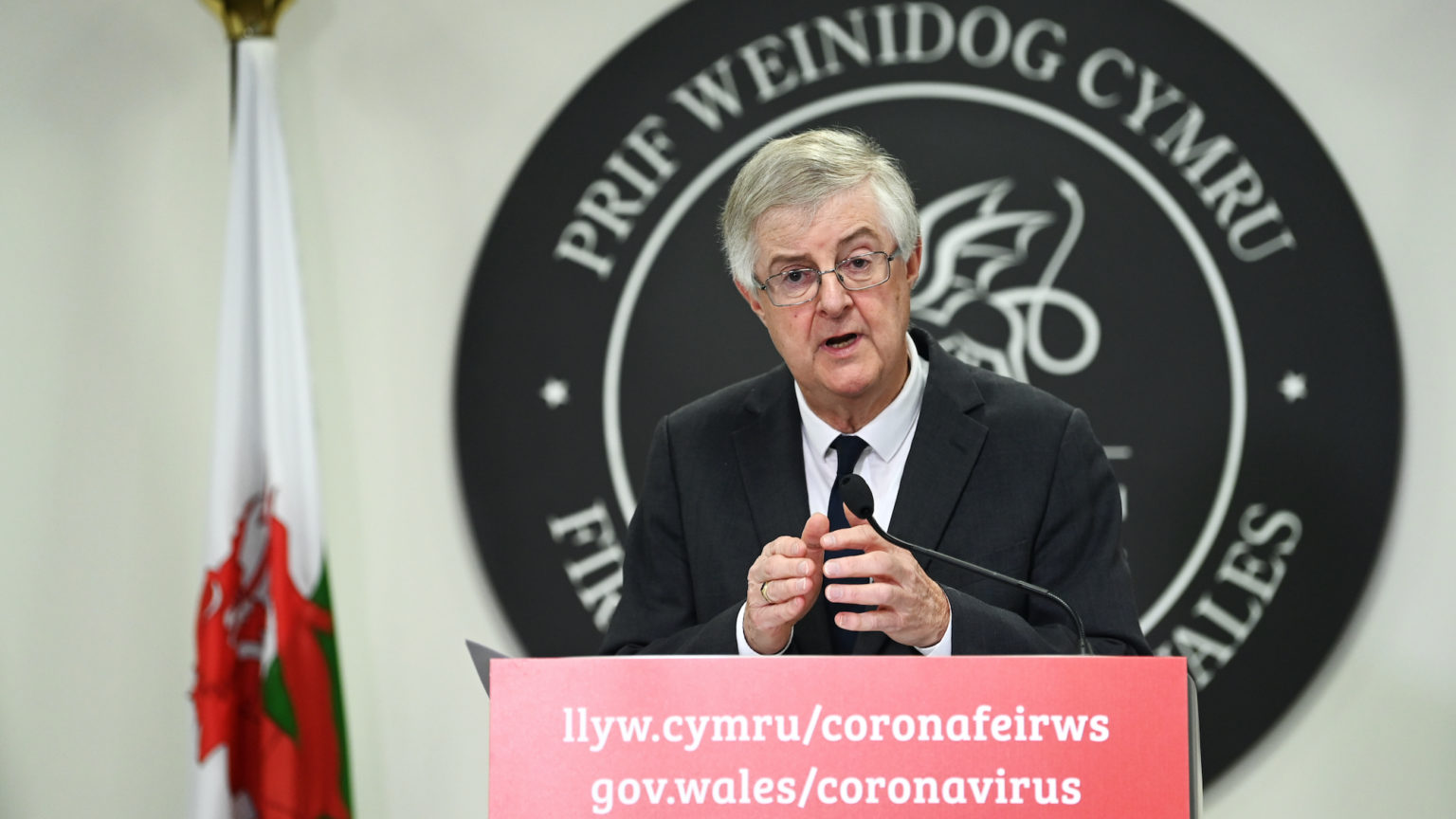 Welsh first minister Mark Drakeford has been relatively unknown, even in Wales, throughout most of his career. A Latin scholar, and former university lecturer, he was characterised as a ‘reluctant leader’ – indeed, he didn’t take part in the TV debates during the 2019 General Election. One journalist claimed that speaking to him was ‘reminiscent of the sort of university tutorial Drakeford might have given as an academic’. Searching for a flicker of charisma, the BBC noted that he was the only member of the Welsh assembly to have milked a cow.

Yet over the course of the pandemic, Drakeford has become a leading voice of draconian lockdowns, prompting the New Statesman to note ‘far more people now have a view about him’.

It’s been quite the promotion for Drakeford. Having started climbing the greasy pole of regional politics in the early 2000s, he now heads the Welsh Labour Group at the Senedd (Welsh parliament) in Cardiff. Until now, he was most famous for his stint as Wales’ de facto Brexit minister – or rather, anti-Brexit minister, given he preferred to ignore the 52.5 per cent of Welsh voters who voted Leave, and campaigned furiously to remain within the EU.

Now, amid the coronavirus pandemic, Drakeford is revelling in the attention Wales is receiving. He even conducts press briefings several hours before the UK prime minister Boris Johnson, so that he might be seen to be leading the debate.

Yet ‘the Emperor of Cardiff Bay’, as one critic calls him, has little to be proud of, given he has overseen the dire situation in the principality’s health and social services.

Since devolution, social and healthcare have been the responsibility of local government. This is why each of the devolved assemblies have their own chief scientific officers, directorships and organisational bureaucracies.

Twenty years ago, while setting out its devolved ambitions, Wales decided to focus on patients as ‘potential producers of health gain, rather than as consumers of healthcare’. So instead of prioritising the funding of hospital beds, medical treatment, or palliative care, the Welsh public-health industry has concentrated on treating so-called ‘health behaviours’ in order to avoid hospital admissions in the first place. As a result, it has placed a lot of time and resources on brow-beating Welsh people about the dangers of smoking, alcohol consumption and obesity. All in the interests of keeping people out of Wales’ inadequate healthcare sector.

Preventive therapeutic strategies are now commonplace across all public-health authorities. And that often means that physical care – hospital beds, for example – has been a low priority. And it is this infrastructural void that has been painfully exposed during the pandemic.

This should not have been news to anyone. A WHO report from 2012 noted that Wales’ ‘health inequalities have proved stubbornly resistant to improvement’. Today, there continues to be ‘a fragile situation’ with regard to elderly care homes and children’s services in Wales, and the situation is reflected across most of the other social services.

Not that Drakeford has been too concerned. He has seized the spotlight to take windbaggery to heights seldom seen since Neil Kinnock. Catchphrases include: ‘the race is with the virus’, and the Kennedy-lite, ‘We will only get through this if each one of us asks ourselves not “what can I do?”, but “what should I do?”‘.

For Drakeford, this means lockdowns, border controls, bridge patrols and finding other ways of shutting down connections with the outside world. Save the NHS, stay in your shed. He has also: sanctioned the roping off of ‘inessential’ items – like children’s books and clothes – even within ‘essential’ shops; imposed harsh restrictions on the sale of alcohol; and at Christmas, mooted plans for vaccine ID cards, even after UK government minister Nadhim Zahawi rejected the idea. Drakeford really has come to embody Labour’s growing contempt for social life and the everyday struggles and lived experiences of ordinary people.

Yet his popularity rating remains stubbornly healthy, at 51 per cent during the Christmas lockdown. That is almost double Boris Johnson’s. Drakeford’s high ratings appear to rely on the misconception that Wales’ social-care meltdown is the result of central government rather than Welsh government policies. His anti-alcohol puritanism may have resulted in him being banned from 100 pubs in Wales, but even this has worked in his favour as it reinforced his public-health message, and saw off his Conservative rival, Paul Davies, who was forced to resign after breaching Drakeford’s festive Christmas alcohol restrictions.

His biggest plus, however, seems to be that he is not Boris Johnson. This means Drakeford can get away with overseeing the worst Covid statistics in the UK, a health service in meltdown and indulging a casual fetish for locking people up. He even seems to be getting away with the slow rollout of the vaccine in Wales, which he argued was deliberately slow so as to avoid running out of doses. This was to avert a situation in which vaccinators are ‘standing around with nothing to do for another month’.

As a result, several surgeries have been offering the vaccine only on Saturdays. Adding insult to injury, his health minister, Vaughan Gething, told the Welsh parliament that it was his understanding that the vaccine rollout had reached ‘the majority’ of Wales’ over-80s. In fact, a mere 23.9 per cent of over-80s had received it.

This incompetence speaks of a deeper problem. It is the consequence of a healthcare system whose leaders have prioritised hectoring people over actual provision of medical services at the point of need. Welsh leaders have forgotten what matters. They are protecting an inadequate health service at the expense of people’s lives.