Does London really have a hunger crisis?

In my time volunteering in East London’s food banks, they have been surprisingly quiet. 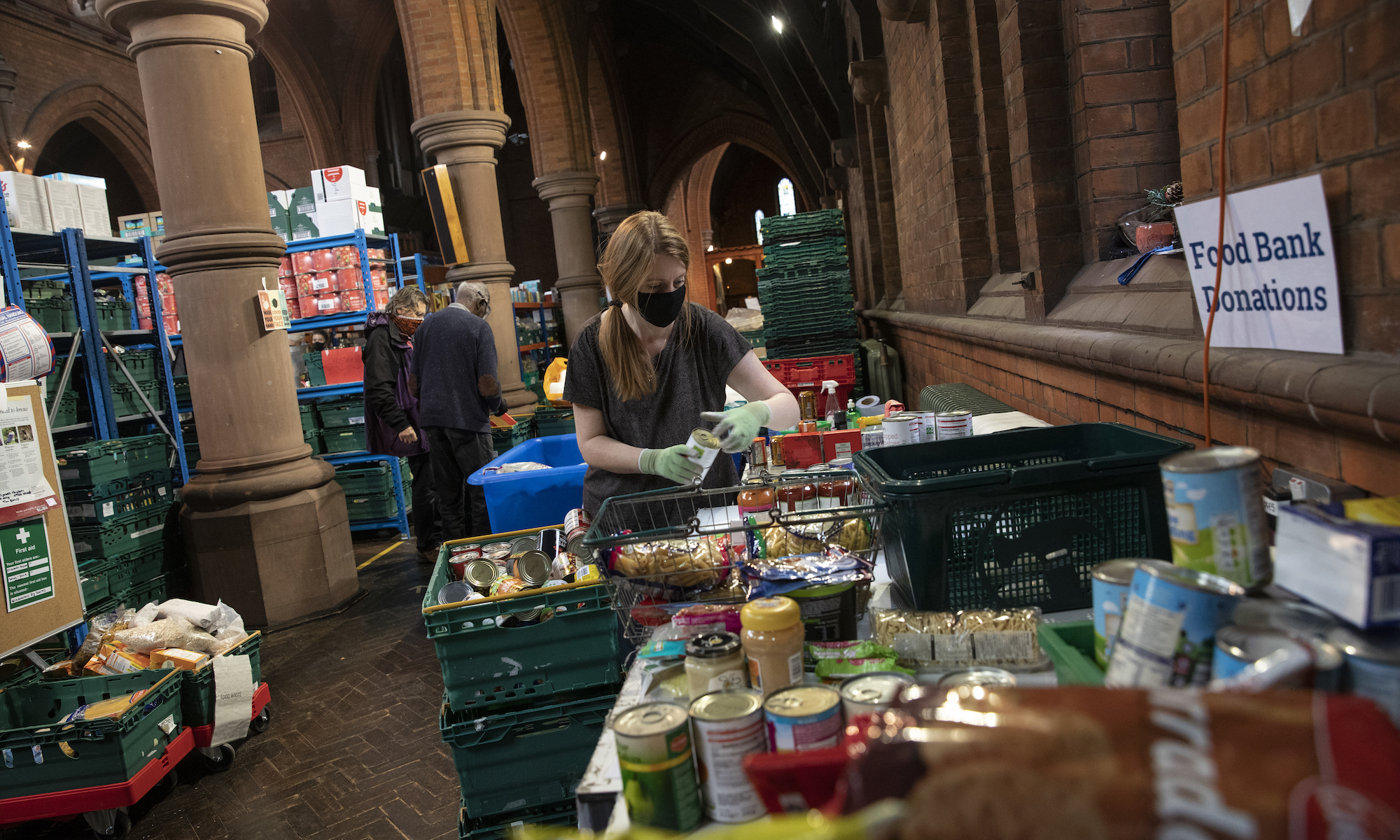 The impoverishment of Tower Hamlets is legendary. The council website proclaims that the borough has ‘the highest rate of child poverty in the UK’. An estimated 57 per cent of children in Tower Hamlets are living in poverty. The council’s head of planning and social inclusion, Mufeedah Bustin, declared in December that ‘food banks have seen an unprecedented rise in demand this year’. The council is responding with an emergency food appeal.

This is puzzling to local residents like me. The youngsters who pass my windows every day seem to be well-fed and well-dressed. They use mobile phones. Many of them wear Nike trainers. After school, they queue up at local takeaways to buy chicken wings, hamburgers and chips, which are relatively costly options to select. These outlets are so popular that in 2017 the London mayor, Sadiq Khan, proposed to prevent new fast-food joints from opening within 400 metres of a secondary school. This would affect the deprived children of Tower Hamlets by making it harder for them to feed themselves. And it’s unclear if the problem is too much food or too little.

I decided to help out over the Christmas period but I found that every food bank in my area already had enough volunteers. They wanted food and essential toiletries. Nothing else. I applied to food banks in the neighbouring borough of Hackney and got the same reply. So I began to visit food banks with bags of noodles, pasta and tinned vegetables from my larder. The first thing I noticed was that a full rucksack containing £15 worth of cheap food is almost too heavy to carry. My next surprise was that many of the food banks were open for just four hours a week. This didn’t square with the ‘emergency’ mentioned by the council.

A few days before Christmas I visited a church in Millwall with a food bank run by five volunteers. It had no signage outside to indicate that food was being distributed. I chatted to a female volunteer who told me the situation was desperate. The bank was open on Tuesdays, she said, but it would soon extend its hours to Friday as well, (‘for the schools’). Then she added something curious. She said the bank would close for the entire two-week Christmas period. This seemed to contradict her suggestion that the situation was critical. Nor did the service look particularly busy. Over a 30-minute period, I saw just two visitors collecting supplies – an elderly male on his own, and a mother with a child.

At a food bank near the Olympic Park, the service was brisker. As I arrived, I saw three eastern European men in their 30s being given bags of supplies. I later learned they were homeless. Two prim-sounding ladies aged about 65 came out of the food bank with their shopping-waggons bulging. They seemed to be friends.

A volunteer told me that demand for food was rising. ‘The queues are changing too, there are more educated people’, she said. She reckoned that her team hands out food to ‘500 adults and 1,000 children’ during their four-hour opening period each week. At that rate, one adult would be collecting a food parcel every 30 seconds. While I was there the rate was about one adult every two or three minutes. Perhaps she was reflecting the sense of ‘crisis’ promoted by the council.

I went to a food bank in Poplar which opens every day and I found more volunteers than applicants. Four chairs had been arranged as an outdoor waiting-room but all the seats were empty. In half an hour I saw five people collecting supplies. A solitary man, who looked about 80, spent 25 minutes in the bank and left with a single bag of groceries. For him, this was probably a social occasion.

The busiest food bank I found was in the centre of Bethnal Green near my home. No referrals or paperwork are required. Anyone who turns up and is willing to queue for 20 minutes will receive bags of supplies. Each applicant must answer three questions: ‘Do you have children? Can you heat food at home? Are you affected by allergies?’ The applicant is handed a ticket and asked to wait in a second queue while a parcel is assembled and delivered at a side-door. The questionnaire is a sensible measure which minimises food waste. The double-queuing method delays the process. Effectively this is a small charge, payable in time, levied on each claimant.

I noticed two main types of people in need: the solitary white male and the Asian mum with kids. Some of these mums live quite a distance from the bank and the process of collecting the food may take up to an hour. In return, they get about £20 worth of supplies. So a weekly food-run is comparable to having a job that takes 60 minutes and is paid at twice the minimum wage. For people in difficulty, this investment is well worth making. And food banks are a highly efficient form of relief. The food is unlikely to be wasted, and the system is voluntary, cashless and free to the taxpayer.

Once, at Bethnal Green, I saw people collecting supplies in a car. Elsewhere this was not uncommon. I spent an hour at an Islington food bank, in Jeremy Corbyn’s constituency, and I counted four claimants arriving in vehicles. Most of these were old bangers. But not all. A family of three drove up in a smart hatch-back. The father, using a crutch, entered the food bank with his teenage daughter while the mother, at the wheel, sat eating a jumbo bag of Cheesy Wotsits. They loaded up the boot with four bags of supplies. Before they drove away, the daughter took a snap of a sunset on her smartphone.

This tableau contains three controversial details: the hatchback, the overweight mum and the smartphone. I would argue that many of us rely on a car and a smartphone for work. And if people in difficulty are forced to sell their high-value possessions before they qualify for help, they may be driven to a deeper level of need from which it will be harder for them to recover. As for overeating, it seems to be a symptom of unhappiness among the poor in an affluent society.

Only once did I see the system being blatantly exploited. Two days before Christmas, I watched as a man and a woman in their late 40s emerged from a food bank carrying five full bags between them. Chatting in an Eastern European language, they quick-marched around the corner and went into a churchyard where they examined their haul. The woman lit a cigarette. The man cracked open two beers. The bottles clinked and they sat on a bench, talking and drinking. Then they kissed. Without doubt the free food was subsidising their booze and their ciggies. But so what? It was Christmas. They were far from home. At least they had each other.

There are subtler forms of exploitation. A food-bank website in Tower Hamlets is used by a chocolatier to advertise luxury biscuits. The company calls this campaign ‘a partnership’ as if it were a new and morally superior way of flogging stuff to customers online. Supermarkets are at it as well. My local store has a crate marked ‘food bank’ near the entrance and customers are invited to donate tins of non-perishable produce. This qualifies the shop as a ‘collection hub’ and earns it a link on the Tower Hamlets website.

The most notorious abusers of food aid are those who exploit it politically. The Labour Party likes to claim that food banks are a scar on our society and yet it relies on their existence to embarrass the government. The idea that poor families can barely feed themselves is very helpful to those who promote the caricature of the Tories as a gang of heartless toffs always ready to gloat as paupers starve. That’s why Labour-run Tower Hamlets likes to advertise the notion that the children on its patch are famished. A properly run council would correct this problem, not boast about it.

On the last day of my volunteering, I could only find three food banks open in the borough. At the first, no volunteers were visible. At the second, two volunteers were waiting but no one was claiming food. At the third, two women were being served by a pair of volunteers as another woman arrived to donate a box of eggs.

Admittedly, it’s a random snapshot. But two women queuing for food in a borough with ‘the UK’s worst rate of child poverty’ doesn’t look like an emergency.