The beheading of a teacher in France is the barbaric logical conclusion to cancel culture. 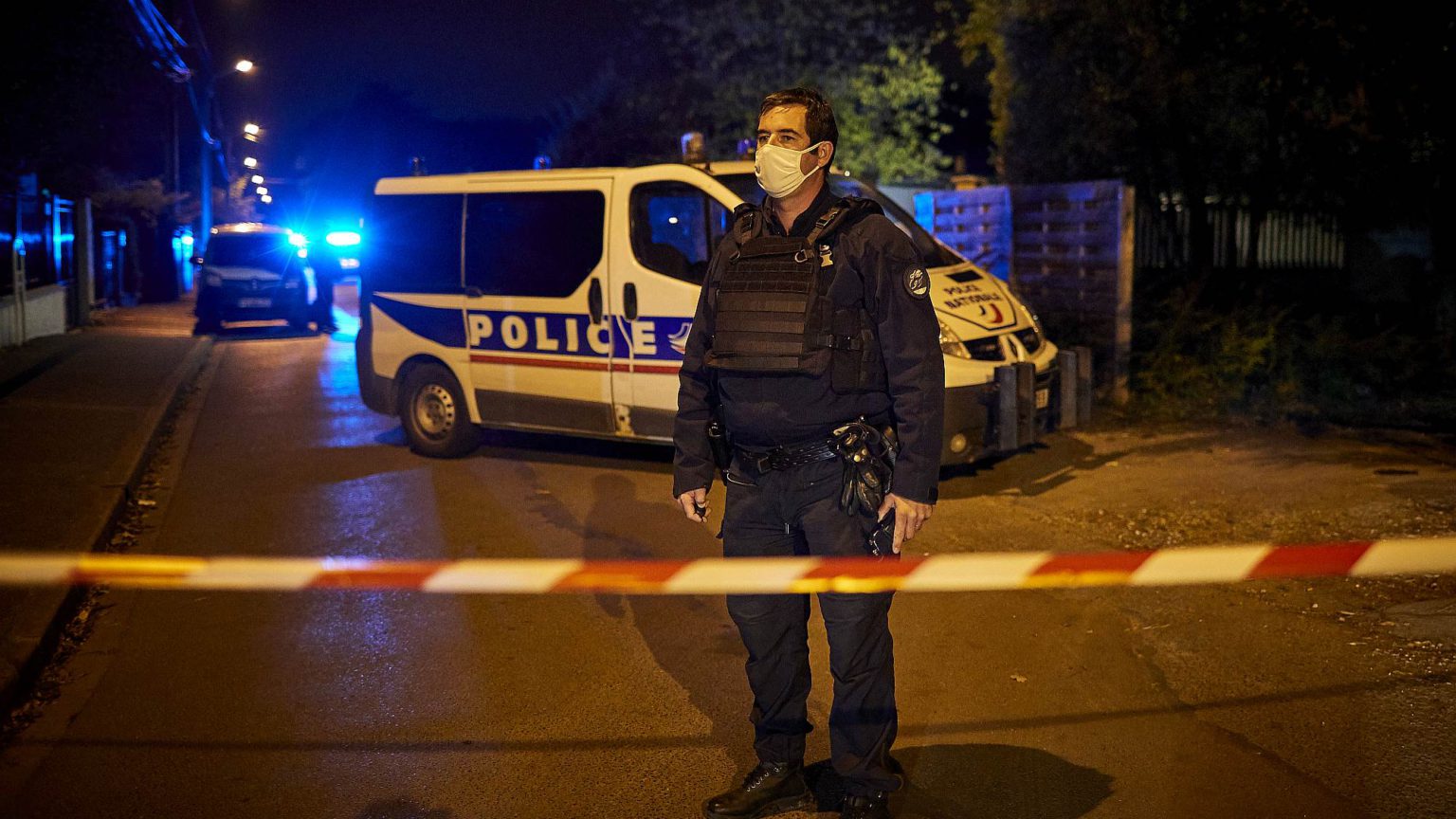 Yesterday, cancel culture turned murderous. It became positively medieval. On a suburban street on the outskirts of Paris a schoolteacher was beheaded in broad daylight for the supposed crime of showing caricatures of Muhammad to his pupils during a classroom discussion about freedom of speech. Decapitated for dissing the prophet, in France, in the 21st century. In essence, the teacher was cancelled, in the most thorough and depraved way imaginable. Enough is enough – everyone must now stand against all snivelling apologists for censorship and cancellation and defend unfettered freedom of speech as the cornerstone of civilised society.

The news from France was truly grim. Samuel Paty, a 47-year-old teacher of geography and history at a middle school in Conflans-Sainte-Honorine, was murdered and beheaded by an 18-year-old Chechen Islamic extremist. The murderous censor was heard yelling out ‘Allahu Akbar’. Then we discovered why Mr Paty was slaughtered in such a deranged, premodern fashion: because he dared to show some of Charlie Hebdo’s cartoons of Muhammad to his pupils during a lesson on why the liberties of thought and speech are so essential to the French Republic. That he reportedly offered his Muslim pupils the opportunity to leave the classroom while the Muhammad caricatures were being discussed wasn’t enough to protect him from the 7th-century fury of his executioner, who no doubt felt ‘offended’ by Mr Paty’s behaviour.

Every Islamic extremist attack over the past five years has been shocking and disturbing. In France alone, around 250 people have been massacred by radical Islamists since 2015. But there is something especially horrific about the premeditated targeting of a teacher for doing his job – that is, encouraging his pupils to think critically. Parents of his pupils say he was a kind, enthusiastic teacher who always encouraged children to think about issues in depth. Sophie Vénétitay of the SNES-FSU teachers’ union was right to say that he was murdered for doing what good teachers are meant to do – ‘teach critical thought’. This attack targeted one man, but its aim was to terrorise an entire republic; to send a dire, Middle Ages-style warning to public servants that they will put themselves in danger if they dare, in the terrorist’s own words, to ‘belittle Muhammad’.

So Mr Paty was beheaded for the crime of blasphemy. He was the victim of a barbaric one-man inquisition. Yet even as we balk at the depravity of this act of terror, we also have to confront the fact that it did not take place in a vacuum. Nor did the massacre at Charlie Hebdo’s offices five years ago, or the barely discussed attack with a meat cleaver carried out by a Pakistani man at the site of Charlie Hebdo’s old offices just three weeks ago, in which two people were wounded. No, all of these attacks, all of these explicit acts of vengeance for the supposed speechcrime of ‘blaspheming’ against Muhammad, took place in an era in which criticism of Islam is described as ‘Islamophobia’ and in which offending Muslims is apparently one of the worst things you can do. There’s a context to these barbaric attacks – it’s the context of the cult of cancellation and the ridiculous, regressive idea that people have a right not to be offended.

These attacks are an expression of two of the most worrying trends in Western European societies right now: Islamic extremism and cancel culture. Strikingly, open, frank discussion of these two problems is constantly discouraged by the political and cultural elites. After Islamic-extremist attacks we are implored not to look back in anger, to forget about it, essentially, and move on. Dwell for too long on something like the Manchester Arena bombing in 2017 or the Nice truck attack on Bastille Day in 2016 and you run the risk of being branded ‘Islamophobic’, that catch-all term of demonisation that is designed to chill debate about radical Islam, the crisis of integration, and the social and cultural divisions fostered by the ideology of multiculturalism. As for cancel culture, it doesn’t exist, the chattering classes tell us; it’s the concoction of right-wing culture warriors who just don’t like being ‘called out’.

But these things do exist. Islamic extremism is a genuine problem in 21st-century Europe and the trend for cancelling people deemed guilty of wrongthink – whether it’s feminists who question aspects of transgenderism or people concerned about mass immigration – is a real and growing phenomenon. Indeed, cancel culture is applied with particular vigour against anyone who criticises Islam. They will be branded ‘phobic’ or racist. People have lost their jobs and even been dragged to court in European countries for ‘blaspheming’ against Muhammad. And who can forget the reluctance of significant sections of the cultural establishment – including columnists and novelists – to stand by Charlie Hebdo following the massacre of so many of its cartoonists and writers in 2015? Sure, no one should have been killed, they said, but that magazine is ‘Islamophobic’; it ‘punches down’, whatever the hell that means.

All these spineless excuse-makers for religious censorship, all these people who failed time and again to stand with people who were being chastised, censured or even physically attacked for questioning or making fun of Islam, ought to be taking a long, hard look in the mirror this morning. For they have contributed to this climate in which extremists take it upon themselves to punish ‘blasphemers’. The elites’ mainstreaming of the idea of ‘Islamophobia’, their treatment of criticism of Islam as a racist scourge that must be cancelled, gives a green light to Islamists to take even more punishing action against anyone who dares to disrespect their religion. The terrible truth is this: the No Platforming of people for being critical of Islam and the murder of people for being critical of Islam differ only by degree, only by severity. In both cases, the exact same warped ideology is being applied: that it is legitimate to punish ‘offensive’ speech, especially if it is offensive to some Muslims.

The beheading of Mr Paty was a militarised expression of cancel culture. That killer was the armed wing of political correctness, a self-styled enforcer of the now mainstream idea that it is ‘phobic’ (that is, evil) to criticise Islam. Indeed, the interplay between the mainstream chilling of discussion about Islam and the extremist attacks on individuals who ‘blaspheme’ against Islam can be seen in the fact that Mr Paty was the subject of complaints from parents before he became the target of a murderous terrorist. Indeed, it seems he only came to the attention of his executioner because of a social-media fuss over his lessons on freedom of speech. The everyday instinct for cancelling problematic people feeds the monster of extremist violent censorship.

‘Freedom of speech has consequences’ – that is the cri de coeur of the censorious woke left and the illiberal cultural elites. Well, guess what? It will have been the cri de coeur of the piece of shit who murdered Mr Paty, too. That oh-so-common cry that free speech has consequences is one of the most chilling ideas of our time. It doesn’t mean that freedom of speech has the consequence of disagreement and debate and ridicule, of people using their speech to challenge your speech – this is something all of us accept and actively welcome. No, it means that if you express certain ideas, you will suffer. Make no mistake: it is a threat. Speak your mind and you will suffer the consequences – job loss, banishment from campus, public shaming, even hounding in the streets, as we have seen in recent furious confrontations between correct-thinking mobs and people who dare to hold different opinions. All that radical Islamists do is add a further ‘consequence’ to freedom of speech – extrajudicial execution.

Enough is enough. If the slaying of Samuel Paty doesn’t act as a wake-up call to the censorious elites, then we really are in serious trouble. Teaching unions across Europe should absolutely condemn his murder and defend the right of teachers and professors to challenge their pupils and students, including with caricatures of Muhammad. Campuses must cease all their regressive No Platforming and speech-policing policies. Cancel culture needs to be cancelled. And we need to normalise criticism of Islam – alongside criticism of Christianity and every other religion – in order to send a clear message to everyone: that no god, prophet, faith or fad is beyond questioning in our free societies. Let’s all say ‘Je suis Samuel’ and confront the apologists who created this world in which people fantasise that they have a right not to be offended.