The Battle for Brexit isn’t over yet

Blair, Major and other powerful figures want to keep us beholden to Brussels. 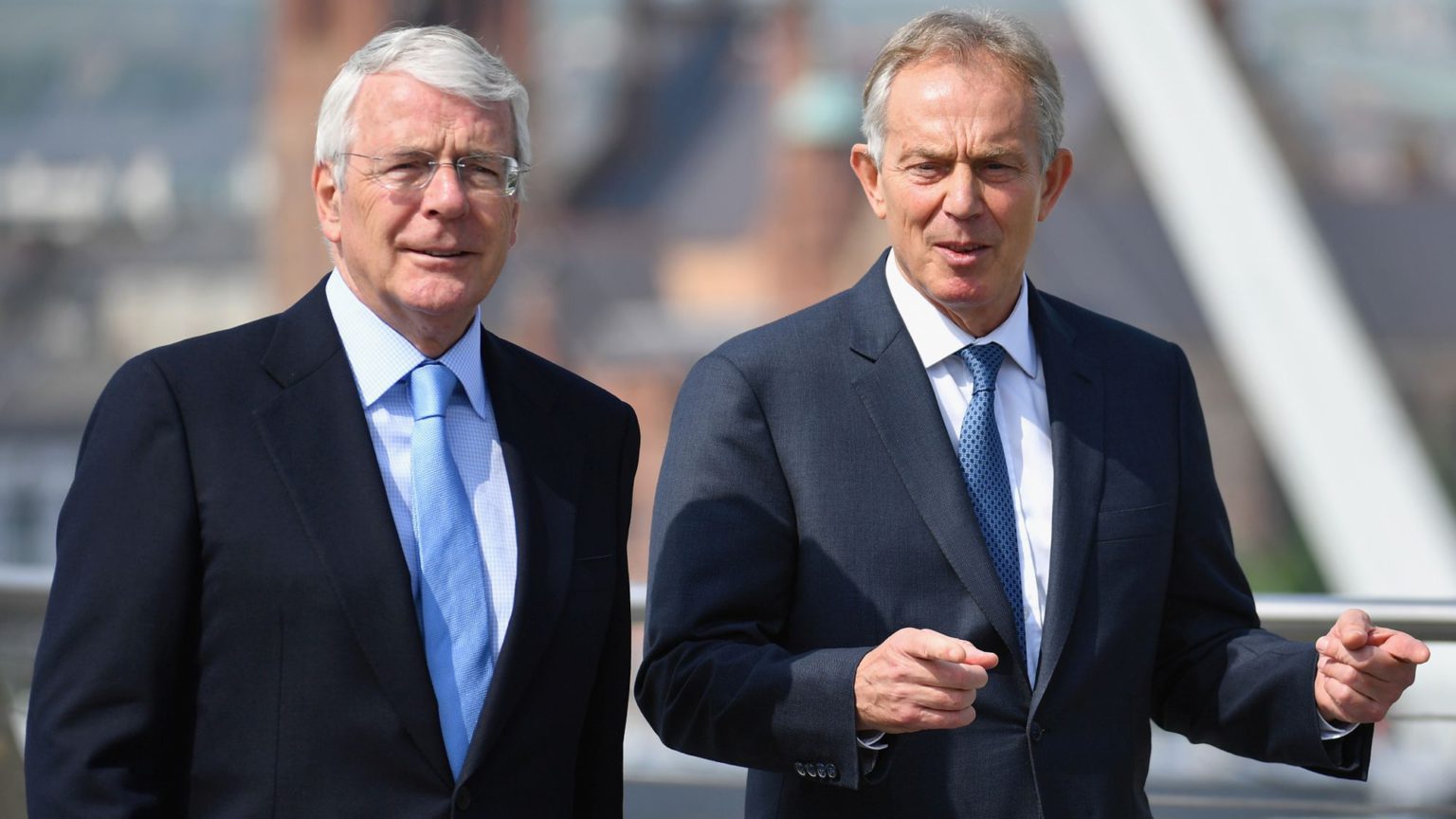 Consider the intervention of John Major and Tony Blair at the weekend. These arch Remainers, who for four years have abused their positions as former PMs to pronounce endlessly about how awful and dangerous Brexit will be, are back. This time with a joint byline in the The Sunday Times. They castigate the government for introducing legislation – the Internal Market Bill – that could potentially be used to override some of the stipulations of the Withdrawal Agreement. Which, lest anyone forget (how could we when we are reminded of this fact ceaselessly by the mostly Remoaner media?), is a legally binding international treaty. The government is behaving in a ‘shocking’ way, Major and Blair say. Reason has been ‘cast aside’, replaced with ‘cavalier bombast’, and the new bill is ‘irresponsible’, ‘wrong’ and ‘dangerous’.

Do Major and Blair, and the FBPE weirdos feverishly sharing their piece, really expect us to believe that they are uncomfortable with the Internal Market Bill because it ‘breaks international law’? If so, then they really must believe their own propaganda about Brexit voters being dim, ‘low-information’, easily led idiots who believe any old crap they read in the papers. You don’t need a PhD, or even a GCSE, to see through the hypocrisy and the hollowness of Major and Blair’s posturing about the sacredness of international law. Blair? The man best known for launching an illegal war in Iraq that led to the deaths of hundreds of thousands of people? What next, an article by Major on the importance of marital fidelity?

People aren’t stupid. They know that when someone like Blair talks about the importance of adhering to the rules-based order, he shouldn’t be taken seriously; that something else is going on here, something unsaid. They know that when commentators like Nick Cohen, who cheered the barbarism unleashed on Iraq, now wail about the ‘gormless authoritarianism’ of the allegedly law-breaking Boris government, something doesn’t add up. They know that when people who okayed the breaking of international law to launch a devastating, destructive war moan about Britain now being a ‘rogue state’ just because the government wants to reclaim some oversight over trade between the UK’s four nations, something is off; that the bluster about global rules is a disguise for something else.

The truth is that many nations have either overridden or reneged on their obligations in international treaties. Not only Blair and many of his Remainer fanboys, but also the EU itself, which has on occasion turned its nose up at international legal norms when they run counter to its own interests. Yet none of these instances of so-called ‘law-breaking’ caused the British commentariat to enter into paroxysms of fury about the roguish horror of deviating from international treaties.

And there’s a really straightforward explanation as to why: it’s because the Remainer elite’s rage against the Internal Market Bill has nothing to do with the principle of respecting international treaties and everything to do with defending one particular international treaty: the Withdrawal Agreement. For the simple reason that this treaty does something these people have longed for and agitated for: it weakens the Brexit ideal, stymies the democratic cry of ‘Take Back Control’ and keeps sections of the UK beholden to EU rules and regulations.

As Major and Blair say in their piece, the Withdrawal Agreement makes clear that Northern Ireland will have to ‘comply’ with ‘EU rules, including those on state aid’, and this is the ‘unavoidable price of Britain leaving the Single Market and the Customs Union’. The Withdrawal Agreement also potentially curbs the granting of state aid to companies in the rest of the UK that have significant dealings in Northern Ireland.

In short, the Remainer elite loves the Withdrawal Agreement for the same reason many of us on the Brexit side have long criticised it: because it softens Brexit; it maintains EU oversight in crucial areas of what ought to be sovereign British activity, including state aid. Their fury at the government’s proposal to create the space for deviation from sections of the Withdrawal Agreement is not a matter of legal principle but of ideological prejudice. They want to preserve the sanctity of the Withdrawal Agreement in order to ensure that the EU still plays a key role in political and legal matters in parts of the UK.

Major and Blair give the game away in another section of their article. They argue that if parliament passes the Internal Market Bill, then the UK is ‘bound to end up before the European Court of Justice’ because ‘under the Northern Ireland Protocol, [the ECJ] retains jurisdiction over EU rules’. There you have it. Under the most problematic part of the Withdrawal Agreement – the Northern Ireland Protocol – the UK could still be taken to court by the EU for decisions it takes in its own sovereign territory. Thank you, Major and Blair: in outlining why you support the Withdrawal Agreement, you remind those of us who believe in democracy, and in upholding the largest vote in the history of this country, why we should oppose it and urge the government to go further in repudiating it.

The controversy over the Internal Market Bill reminds us that the battle for Brexit isn’t over yet. Not by a long shot. The EU and its supporters in the UK are as determined to retain EU oversight in the UK as they ever were. They still don’t understand what the vote for Brexit was all about. This is clear from Major and Blair’s article, in which they argue that adherence to international law is ‘just as important’ as adherence to domestic law; that internationally drafted treaties should be viewed ‘in the same way’ as the laws drawn up by the elected parliament in the UK itself.

There it is. The Brexit battle summed up. There are those who believe that international laws, rules, regulations and treaties, whether drawn up in the EU or the UN, should have the same authority as laws drawn up in a democratically elected national parliament, and there are those of us who believe that the parliament we elect should be sovereign over everything else, including treaties we signed and have now changed our minds about. A parliament bound by international treaties it cannot change, and threatened by legal action from a foreign court, is not a free parliament. There is only one problem with the Internal Market Bill: it doesn’t go far enough. To defend democracy in the UK, the Withdrawal Agreement must not only be tweaked – it must be torn up.