Extinction Rebellion zealots are only the militant wing of a powerful media-bashing lobby. 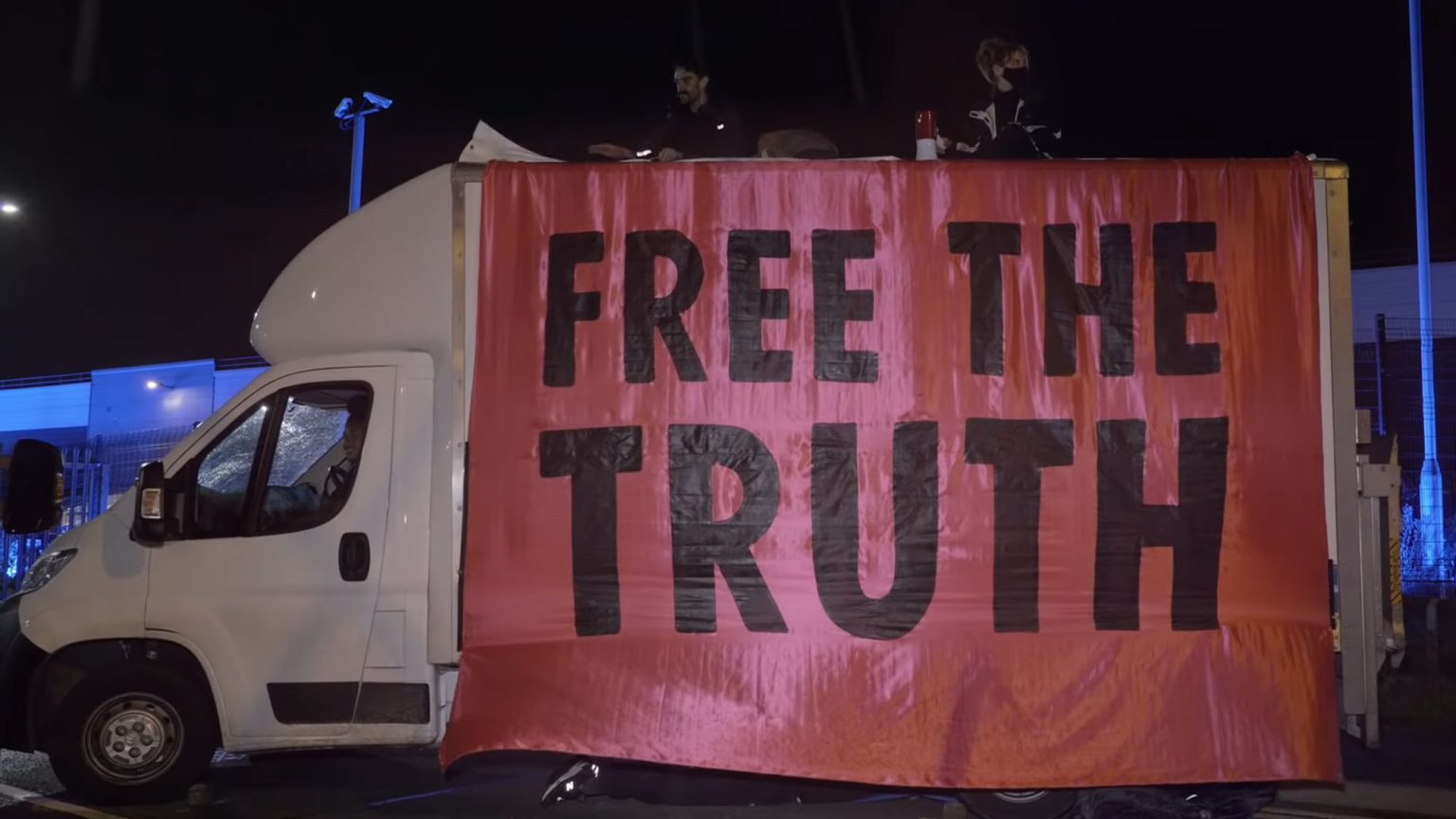 The despicable attempt by Extinction Rebellion (XR) activists to blockade newspaper printing plants, and so prevent anybody reading The Times or the Sun on Saturday, was good news in one respect at least. Now everybody can surely see Extinction Rebellion protesters for what they are.

Behind all the swanning about in fancy dress and theatrical protest love-ins, these eco-zealots are petty authoritarians who have appointed themselves censors of public discussion; self-righteous private thoughtpolice with the moral authority to decide what we should be allowed to read or hear. And they have ruled that the ‘Murdoch press’ must be suppressed. Not just criticised or disagreed with, but banished from the streets of Britain.

As the XR banners and statements made clear at the weekend, they want the media to publish only what Extinction Rebellion deems to be ‘the Truth’. They are all for freedom of the press, just so long as it is free to agree with them – a version of ‘freedom’ which every press-bashing ruler from Stalin to Erdogan would heartily endorse.

No, Diane Abbott, these Extinction Rebellion protesters are not like the Suffragettes, fighting for more democracy. They are the opposite; they are anti-democrats who want to dictate what the demos – the people – are allowed to read and hear, which inevitably means what we are allowed to think and say.

The attack on press freedom was outrageous enough to be met with condemnation from many who normally keep quiet about XR’s disruptive antics. As The Sunday Times’ headline declared, ‘MPs unite in defence of free speech: fury after blockade stops 1.5m newspapers’. There is much talk of having XR declared an ‘organised crime’ outfit, and subject to special anti-terrorism or saboteur laws.

But these attempts to paint XR as extremists opposed by all reasonable people miss the point. Extinction Rebellion is supported by many respectable voices in the middle classes and the establishment. And they don’t just endorse its surreal environmental goals. Many of them also back XR’s attempts to disrupt the media.

That’s why Labour MP Dawn Butler tweeted her enthusiastic support for the weekend’s blockade, before hastily deleting the tweet. It is why social media, bastion of the woke petit bourgeoisie, was full of undeleted posts cheering XR on. It is why XR has been sympathetically reported and promoted by the woke wing of the media: the BBC and the Guardian.

It is why the police treated the protesters with kid gloves and allowed them to disrupt the presses. That was in stark contrast to the treatment of thousands of sacked print workers picketing the Sun for months on end in the Battle of Wapping almost 35 years ago, when an army of baton-wielding riot cops made sure they never stopped one issue of the paper getting out.

Whether you call them terrorists or saboteurs or whatever, the truth is that XR types are far from the only ones who want to make press freedom extinct in Britain. And those few virtue-signalling activists are very far from being the most powerful enemies of media freedom.

It was the Tory government of David Cameron that set up the Leveson Inquiry, using the phone-hacking scandal as the excuse for a showtrial of the popular press, and then established Britain’s first state-backed system of press regulation for more than 300 years. Parliament then passed draconian laws threatening publishers with punitive million-pound fines and costs if they refused to bend the knee to the official regulator – laws which were only stopped from being enforced by a campaign for press freedom in which spiked was involved.

In the 2019 General Election, the Labour Party manifesto threatened a tougher system of state regulation of the media that would have had the XR fanatics wetting their fancy-dress costumes. And anybody who thinks that was just down to Jeremy Corbyn might recall that Labour’s new, supposedly reasonable leader Keir Starmer was the director of public prosecutions behind the largest state attack on journalism in a modern Western democracy. Sun journalists were arrested in floorboard-ripping dawn raids on their homes and left in limbo on police bail for months, before juries eventually cleared them and found them ‘guilty’ only of doing their jobs as journalists – trying to reveal truths that the authorities wanted to keep secret.

Meanwhile, Britain’s top judges are creating and enforcing effective privacy laws which can protect the rich and powerful from public scrutiny – laws which have never been passed by our elected MPs, but which now pose the most pressing legal threat to press freedom.

The desire to sanitise and control the media emanates from the top ranks of the establishment, not just a few hand-waving student political hacks. What they have in common with the likes of XR is a contempt for free speech and freedom of the press. And underlying that is a shared fear and loathing for the masses, who they believe are brainwashed by the mass media. Hatred for the popular press always reflects a toxic attitude towards the populace, who might just read it and think about what it has to say.

The flyer which XR put out at the weekend, asking supporters to place it on the empty shelves where newspapers should have been, was meant to spell out their view of the ‘billionaire-owned press’: ‘We are taught to hate each other, because they profit from our division. We are told what to believe, because they want to keep us in line. We are fed lies and the truth is hidden from us.’

Of course XR doesn’t really mean ‘we’. These people consider themselves immune to billionaire brainwashing. It is the rest of us who they deem too stupid to think for ourselves, so we can be taught to hate, told what to believe and fed lies – which we swallow of course – by the media. And since we can’t be trusted to make our own decisions, we need to be exclusively fed The Truth as preached by XR. After all, left to our own devices without the guiding / censoring hand of our betters in XR, millions of us actually voted for Brexit!

Don’t be fooled by their radical-sounding schtick against the ‘billionaire press’. What our media needs is more freedom, choice and diversity of opinion – not an Orwellian imposition of ‘The Truth’, either by the state nationalising the news under Labour or by a few eco-crusaders blockading dissenters. The left and greens bang on about billionaires, but the real target of their anti-press protests is the people who might be exposed to it. That is why they like to depict somebody like Rupert Murdoch as ‘the puppet master’ who ‘pulls the strings’ through his media empire. As we know, puppeteers can really only manipulate wooden-headed marionettes, which is how XR and Co think of most of us.

We saw the real gap between the XR elitists who pose on behalf of ‘the people’ and the real working people of Britain at Canning Town in east London last year, when commuters pulled the activists disrupting their journey to work down from their moral grandstand atop the trains.

As I wrote at the time: ‘Never mind the “rebellion” of time-rich XR poseurs dressed in arty red costumes with whitened faces, swanning about the blocked streets of central London in a protest-performance that nobody understands but we’re all meant to bow down before. The Canning Town response to the XR stunt was a real, spontaneous people’s rebellion by ordinary commuters who have had enough of being treated as ignorant planet-polluters for the crime of going to work. All power to the Canning Town rebellion against Extinction Rebellion!’

But then, I wrote that in the Sun, so it can’t have been The Truth, can it?

Extinction Rebellion are the militant wing of a powerful anti-free speech, anti-democratic cancel culture in our society. Whatever anybody thinks about climate change, the press, Murdoch or anything else, the inescapable truth is that we need more freedom to debate anything. And whatever form the media takes in the future, press freedom for all will remain the lifeblood of our democracy. That means everybody must be free to write, publish and speak the truth as they understand it, and everybody else must be free to judge it for themselves. Not have The Truth dictated from a bamboo pulpit used to blockade the freedom of the press.