No, fascists are not on the march

The Twitterati’s response to Saturday’s rally against Covid restrictions was nuts. 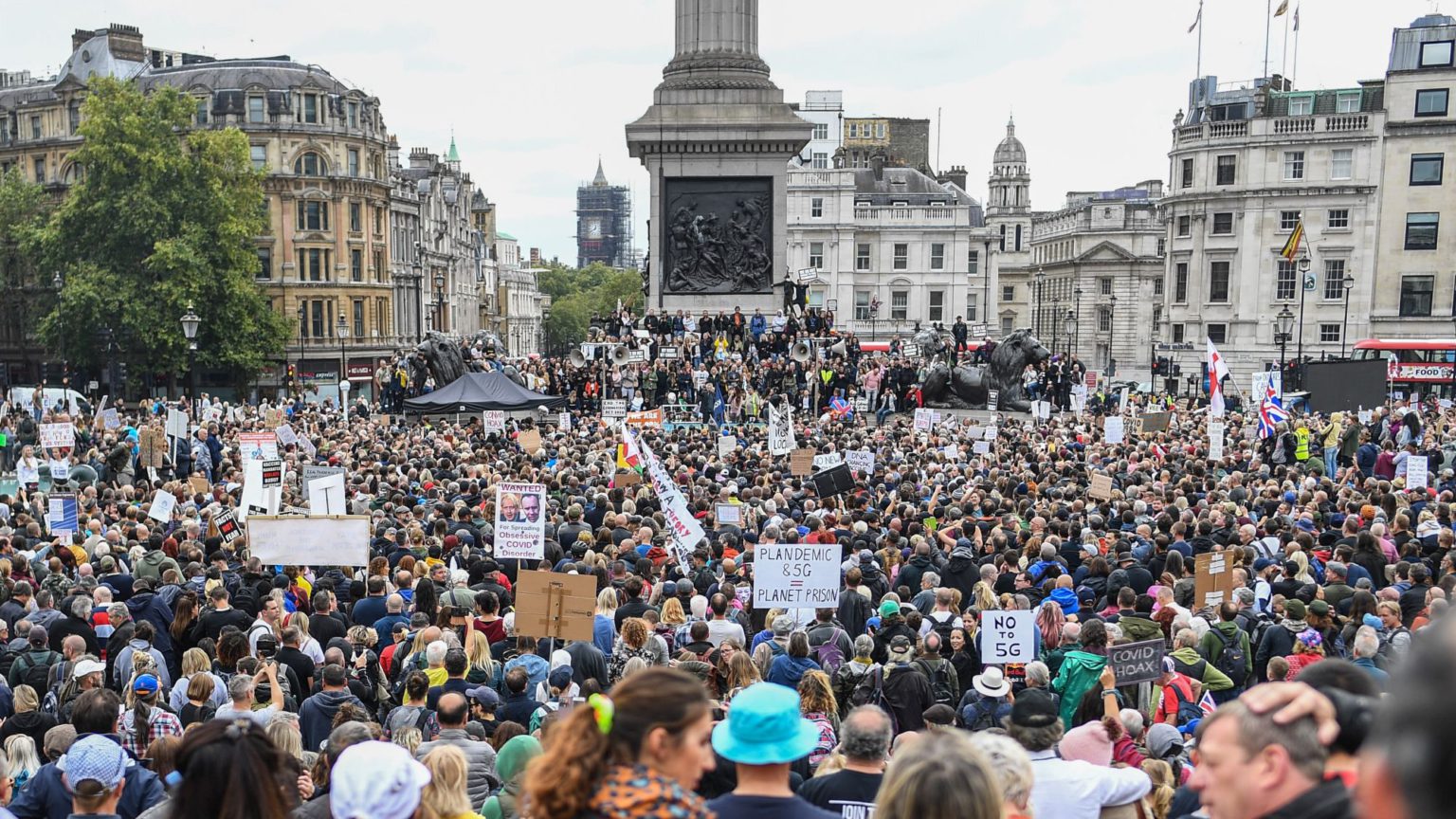 In the media, August is the silly season. Without parliament, and with those considered to be movers and shakers decamped to Tuscany or their Cornish holiday homes, the search for a story gets rather desperate. Social media are little different. Over the August bank-holiday weekend there was an outbreak of moral panic about fascists, fascism and conspiracy theory following Saturday’s ‘Unite for Freedom’ rally in Trafalgar Square. This protest, against continuing Covid-19 restrictions, sought to unite opposition to any extension of the government’s Covid legislation, ahead of MPs’ return to parliament this week.

Over the past six months there has been the most significant curtailment of civil liberties in mainland Britain since the Second World War. Freedom of movement, assembly and trade have each been interfered with in a manner previously unimaginable. While media voices such as Peter Hitchens have questioned this process, few politicians have expressed significant doubts.

And it has usually been those politicians who would consider themselves ‘progressive’ who have been the most committed to forcing us to change our behaviour. While Boris Johnson has at times looked slightly awkward about the whole thing, Nicola Sturgeon and Sadiq Khan, to take just two examples, have few such qualms about the new authoritarianism. For certain activists, health and safety is everything, and civil liberties count for very little.

Given this backdrop, the issues raised by Saturday’s protest did not concern the nation’s social-media critics. Of course, the organisers of ‘Unite for Freedom’ did themselves few favours by inviting David Icke to speak and bringing some of the whackier conspiracists and anti-immunisation campaigners out of the woodwork. As the Lockdown Sceptics website has discussed, this does more harm than good. But the presence of Icke does not explain the reactions to Saturday’s protest.

Among the Twitterati there seems to be very little questioning of the renewed lockdown in Oldham or the similar interventions we have seen in recent weeks. All in response to an increase in positive tests, not in hospital admissions or deaths. That face coverings which we were advised would not help at the height of the Covid outbreak are now, bizarrely, mandatory in shops also seems of little concern.

No, what mattered online was that Hope Not Hate’s Joe Mulhall had pictured two men above Trafalgar Square with a flag bearing the logo shared by Oswald Mosley’s prewar British Union of Fascists (BUF) and his postwar Union Movement. The men concerned were from the New British Union, a re-enactment society of Mosley’s BUF, only without its support base. The image went viral, with ‘British Union of Fascists’ trending on Twitter, and produced a fear of imminent fascist takeover not seen since the Brexit vote of 2016, or in 2019 when Boris Johnson terrified British liberals by proroguing parliament in an attempt to hold a General Election.

Perhaps the first thing to do here is salute Hope Not Hate’s indefatigability. Maintaining an anti-fascist organisation, with salaried staff, investigations, a website and publications, in an era when Britain lacks a fascist group capable of filling a socially distanced train carriage, is an achievement. Earlier this year the UK seems to have proscribed under counter-terrorism legislation an organisation, the Feuerkrieg Division, that no longer exists, and which was formed by a 13-year-old.

In the absence of real-life jackboots on the streets, much of the work of ‘anti-fascists’ comprises campaigning against Brexit and providing ammunition for those who, as paranoid as some of the anti-immunisation campaigners, see fascists lurking everywhere. Cambridge University professor Priyamvada Gopal tweeted that she thanked the British Union of Fascists (sic) ‘for making visible and clear what some of us have been pointing out for months now’. For good measure she added: ‘Fascism is in the ascendant and must be fought.’ One wonders what she would have thought if three of them had turned up, rather than two?

Particular hilarity could be found from those Twitter users who were expressing their concern that the fascists were on the march again and who possessed little EU flags on their Twitter biographies. Sir Oswald Mosley was a proud European federalist when the likes of Guy Verhofstadt and Ursula von der Leyen were still in nappies, and the thrust of his postwar Union Movement was to campaign for ‘Europe a Nation’. To quote the Friends of Oswald Mosley website: ‘Though political uniforms were now banned, the “flash & circle” symbol was retained, and now stood for the flash of action within a European union (as opposed to just in Britain).’ That is the flag that was waved at Trafalgar Square on Saturday.

The weekend’s events had one draconian addendum: the arrest and fining of rally organiser Piers Corbyn, in a summer when restrictions on gatherings were seemingly waived for certain protests and the police took the knee or ran away from Black Lives Matter activists. There is much to disagree with Piers Corbyn about. But proponents of freedom should be much more concerned about his arrest and punishment than two blokes stood at the back with a Mosleyite flag in their hands.

Dr Paul Stott is a writer and commentator based in the UK. Follow him on Twitter: @MrPaulStott