Is the left making a comeback in Poland?

There are clear signs that the left could be mounting a challenge to the illiberal Law and Justice Party. 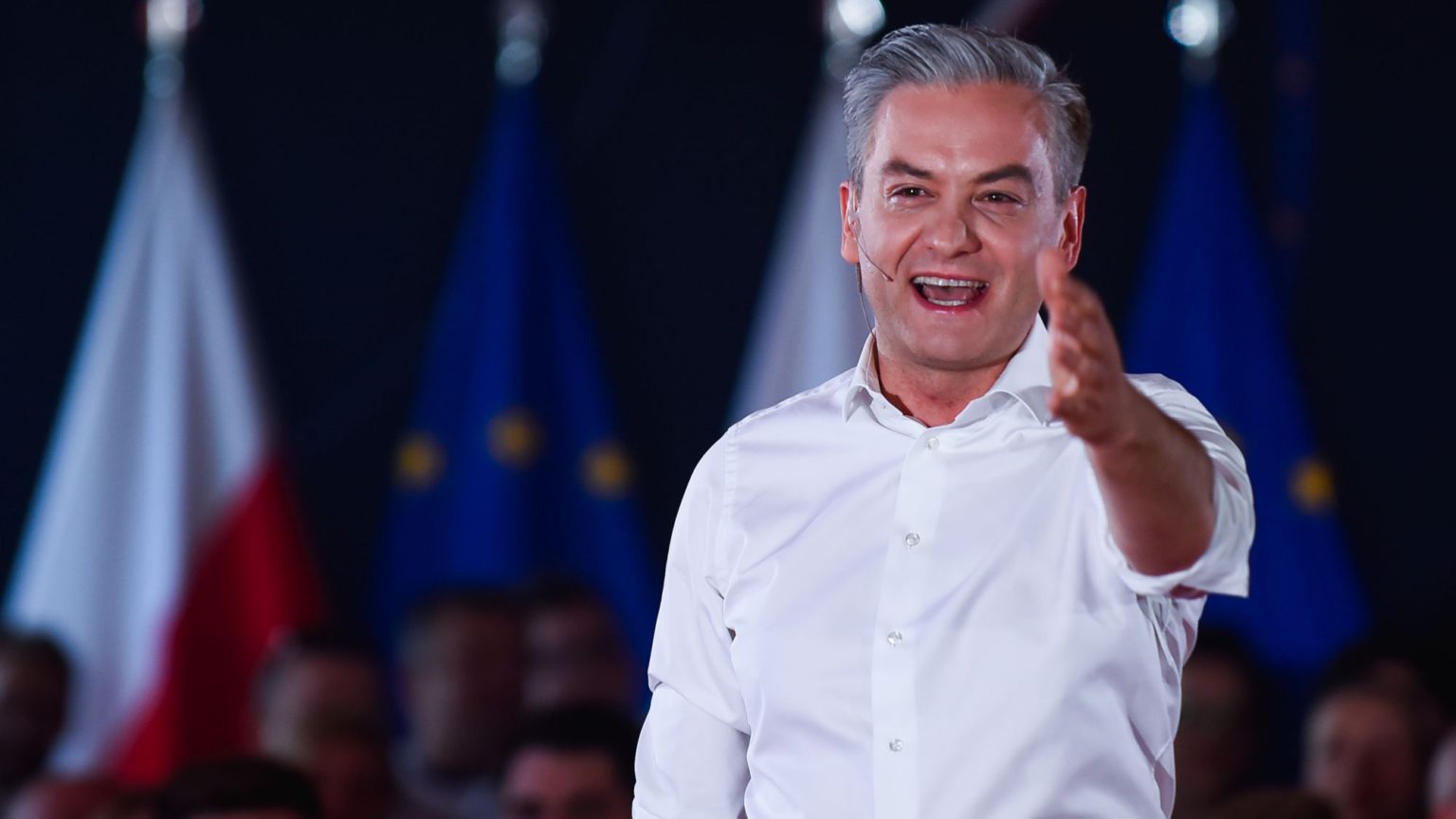 After almost two decades of decomposition, the Polish left seems to have stopped the rot. A coalition known as Lewica (the Left) won 12.6 per cent of the vote in the 2019 parliamentary election, giving it 49 seats, which is 49 more than it won in 2015. It has led some to talk tentatively of a genuinely progressive left opposition to the dominant Law and Justice (PiS) party, led by Jarosław Kaczyński.

Despite the fledgling revival of the left, illiberalism remains very much in the ascendency in Poland. At the 2015 parliamentary election, after 25 years of post-Communism, just over half of Polish voters rejected the liberal, globalist status quo, and elected the protectionist and nationalist PiS. After four years of PiS rule, in which it rolled back judicial independence and media freedoms, voters backed PiS again at the 2019 parliamentary election with 43.6 per cent of the popular vote. And this July, voters re-elected PiS-puppet Andrzej Duda president after he ran an unashamedly anti-LGBTQ campaign.

Opponents of PiS rallied around the young Warsaw mayor Rafał Trzaskowski, who was running as the presidential candidate for the Civic Coalition (KO), which is led by the liberal opposition’s largest party, Civic Platform (PO). Trzaskowski ran Duda close in the second round, but, as the dust settled, many started to envisage a different shape to the opposition to PiS – an opposition in which the left could finally be ready to play a leading role.

The electoral coalition of the Left pulled together three streams of the Polish left, allowing them to stand under a single banner during the 2019 parliamentary election. With three male figures – Włodzimierz Czarzasty, Robert Biedroń and Adrian Zandberg – representing the coalition, it was nicknamed the ‘Three Tenors’ pact.

The biggest player, Czarzasty’s post-Communist Democratic Left Alliance (SLD), held power from 1993 to 1997 and 2001 to 2005, and is largely made up of people from the Polish United Workers’ Party (PZPR), which used to be the Communist Party. As the only group in this left bloc electorally big enough to get state funding, its role in the triumvirate is crucial. Wiosna (Spring) is a political project led by the openly gay Biedroń, which is slated for formal integration within the SLD later this year. And the third entity, Razem (Together), represented by Zandberg, was founded in 2015 as an avowedly left-wing party.

‘The SLD [represents] a key bloc of voters, and its nostalgia and welfarism are important attractions for a group of the electorate’, says Adam Ostolski, ex-leader of the Green Party and a sociologist at Warsaw University. ‘But this group, with the other parts of this “new left”, will probably hit a ceiling of 15 to 20 per cent of votes in the short term’, he continues. ‘The “reluctant voters” are the key. They may not trust [the liberal] PO, but they don’t understand the left.’

Journalist Konstanty Geber wonders about the differing priorities of the coalition partners. ‘The SLD has a spectacular capacity to put institutional survival on top of the agenda, and left-wing values squarely at the bottom’, he tells me. ‘And Razem is doing exactly the opposite: values on top, survival irrelevant.’

Julia Zimmermann, a member of the Razem executive board, is more hopeful. ‘The SLD followed the [Tony] Blair-[Gerhard] Schröder Third Way path and lost its claim to being a left-wing party. But it has changed’, she says, with a wry smile.

To challenge PiS in the 2023 parliamentary election, the left needs to face its demons – and cross its fingers. Saddling a cow might be easier.

First, it needs to face up to Communist-era associations. This is where the left must start its fightback, says Gavin Rae, a sociologist at the Koźmiński University in Warsaw. It won’t be easy, given the popular equation of Communism with fascism in the minds of many Poles, with the left in its broadest sense is seen either as directly responsible for, or at least complicit in, the crimes of the Stalinist era.

Rae says the left must start emphasising some of the progressive developments undertaken during the Communist era of the Polish People’s Republic (PRL). ‘The period of the PRL partly involved a civilisational jump for the country through mass literacy, provision of free healthcare, etc’, says Rae.

Likewise, Zimmermann says that one of the left’s main tasks is to reclaim a stake in Polish history. ‘There is a history of workers’ protests in Poland that we aren’t taught about in schools’, she says. ‘Also, Poland’s first post-independence-era president, Gabriel Narutowicz, was a socialist.’.

Secondly, the left must find a way to coexist with the Catholic Church. As Wojciech Przybylski of the Res Publica think-tank in Warsaw says: ‘The left has a hard time admitting that the core of its message could go hand-in-hand with a coherent and politically mobilised group of voters who are Catholic or post-Catholic.’

Citing the performance of Szymon Hołownia, a socially conscious, professed Catholic, who came third as an independent candidate in the first round of the presidential election, on 13.8 per cent of the vote, Przybylski says this shows there could be an appealing non-right-wing programme that has the church onside. Others agree. ‘Hołownia could be a great asset for the left’, Ostolski says. Michał Kobosko, who works for Polska2050, Hołownia’s newly created political association, even says his group is open to talks with the Left, PSL and PO. ‘We are pragmatic and open-minded, on all fronts’, he says.

Zimmeran is a little more cautious, admitting that ‘there is a strong anti-clerical tradition among the rural community, where the church has always been a big landowner and employer. That is something we can work on’, she tells me. ‘But we have to make it clear that we are not anti-church per se, but pro-secularisation of the state.’

Thirdly, the left must challenge PiS on social issues. Przybylski says the PiS ‘is carrying out a full-frontal right-wing economic policy, where party officers are using public resources to capitalise private and party gains.’

Rae agrees with the need to take PiS on social policy: ‘The left has to offer a vision that goes beyond the marginal social handouts, tied to extreme social conservatism, provided by PiS. This should include urgent investments in public services such as health and education.’

‘The Polish left has so often not really trusted “the people”, but in 1980 it believed the people were on its side. This might well have continued if it hadn’t then abandoned the workers after 1989. The left must remember that the people who supposedly wholeheartedly support PiS and its values are the same people who supported the left-leaning Solidarity of the 1980s, and who gave the SLD huge votes and parliamentary victories in 1993 and 2001.’

The strange life of liberal Poland

Some see the main concern of PO, the largest liberal party, as maintaining the hegemony of the PiS and itself. ‘PO uses some left and green language as a decoy from time to time’, Ostolski tells me, ‘but its biggest enemy is any challenger from the left, whether it be [the Left] or Hołownia’.

But PO may itself also need to change, and that could help the left. As Tomasz Sawczuk writes in an essay included in The End of The Liberal Mind, liberals need to change their approach to the economy: ‘Liberalism should not be associated with slavish devotion to the free market.’

Still, Ost is not certain liberals feel the need to change, given the historic weakness of the anti-capitalist left in Poland:

‘The dilemma for the Polish left, ever since early in the 20th century, is that it has not so much been anti-capitalist as anti-nationalist. And to be anti-nationalist it is sufficient to be a liberal, not a leftist. Thus there’s always been this overlap between liberalism and leftism, because both are wary of nationalism. In this sense, PO has some leftists in its ranks, as liberals, while the official left parties have been anti-nationalist above all.’

Przybylski is optimistic about the left’s prospects. ‘The new generation is promising, with a mix of cultural progressivism and personal dignity messages, but without heavy-handed budget spending’, he says. ‘Within decades [the left] stands a chance of winning over new generations who will be deprived of the social benefits and privileges enjoyed today by pensioners and full-time employees.’

Some don’t want to wait that long. Agnieszka Wiśniewska, the editor-in-chief of left-wing media organisation Krytyka Polityczna, believes the rise of Podemos in Spain has already changed the conversation on the left. She says that the ‘Black Protests’ (against the tightening of Poland’s already strict abortion law) and the Committee for the Defense of Democracy (KOD) mass movement showed the potential in Poland for movements similar to Podemos.

Others believe the Polish left still has a lot of work to do. ‘A strong independent left in Polish politics is like the gravitron in physics. Theory postulates that it has to exist and that, indeed, it plays a fundamental role. It simply has not yet been observed in practice’, Gebert says. ‘Until somebody discovers the gravitron, this is where things will remain.’

Jo Harper is a freelance journalist based in Warsaw.