That Fourth Plinth artwork is worse than naff

The End is another piece of public art that expresses contempt for the public. 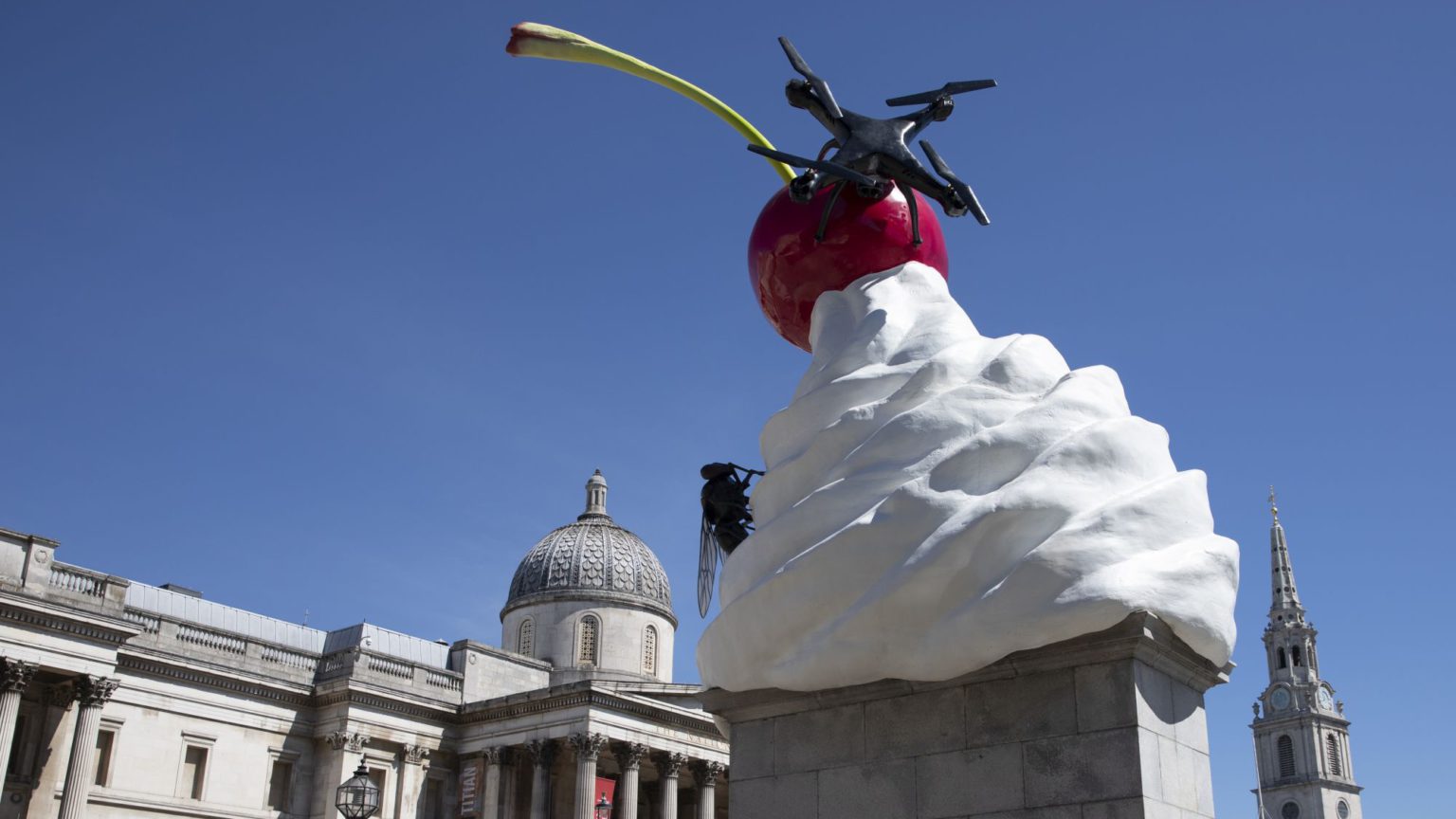 As the mayor of London, Sadiq Khan, prepares his cultural assault on the capital’s public monuments after a summer of protests against statues, a vision of the kind of art the City Hall cultural elite wants to see on display in public places has been unveiled in Trafalgar Square.

The End is a nine-tonne, 31-feet-tall dollop of whipped cream by Heather Phillipson, and is currently being exhibited on Trafalgar Square’s Fourth Plinth. With Phillipson’s hallmark infantile, cartoonish style, it overwhelms the plinth and is topped by a precarious, oversized cherry. A giant house fly, and a surveillance drone looking much like another insect, also perch disturbingly on it. It went on display on 30 July. It is the 13th, and tallest, work to be exhibited on the plinth.

Since 2005 responsibility for placing artworks on the plinth, left vacant in 1844 when plans for an equestrian statue of William IV ran out of money, has rested with a commission controlled by the mayor of London’s culture team. Members of the ‘Fourth Plinth Commissioning Group’ include the broadcaster Jon Snow and the artist Jeremy Deller. It is chaired by the journalist and critic Ekow Eshun.

In June, during a wave of Black Lives Matter protests that led to historic statues being toppled, the mayor set up the Commission for Diversity in the Public Realm, which would ‘review the landmarks that currently make up London’s public realm’, looking not only at statues but also murals, street art, street names and other memorials.

Commenting on the launch of the Commission, Eshun explicitly pointed to the Fourth Plinth as promoting the kind of ‘culturally diverse’ works the elite want to encourage.

Although The End was originally commissioned in 2017, it is complemented by a new digital sound collage called ‘Volta’, specifically composed to reflect ‘the seismic global changes of the past few months’, according to the Fourth Plinth website. ‘The world’s been undulating… like several people of many genders making love’, says the words of its narrator.

‘Volta’ is available on the sculpture’s own website, which also features a livefeed from the drone at the top of the sculpture. The End, ‘Volta’ and the website are all intended to be parts of a single work of art.

In an interview with the i newpaper, Phillipson said, ‘In a way, it feels like the pandemic has changed everything’, in that it has exposed ‘our inseparability from other forms of life’.

In ‘Volta’, humanity is placed on a par with the least sentient of life forms: ‘The sky is a large feeling with a physical shape… there’s not a bacterium, not a midge or reptile or vegetable that isn’t feeling a loving swelling.’ History, on the other hand, is something to be ‘unrolled like several maggot-ridden carpets… all the old thoughts knocked over’.

The foremost question provoked by The End is, ‘…of what?’. Without a definite object, it seems to express the generalised apocalyptic angst of the liberal elite, which has taken to interpreting everything from the pandemic to Brexit, from climate change to the rise in obesity, as a quasi-religious judgement on humanity’s Promethean will to defy natural bounds.

Going by the words of ‘Volta’, there is apparently little hope to see us through these End Times: ‘There’ll never be any more beginning than there is now… any more exquisiteness than there is now… no more hope and trepidation than there are now… never any more or less predictableness.’ The i report describes the sculpture as ‘a satire on hubris and excess – an unstable monument to greedy indulgence collapsing under its own weight’.

Phillipson says she came up with the design of The End at the time of the Brexit referendum and Trump’s election in 2016. Those populist revolts, it seems, were the cherry on top of her millenarian fantasy. ‘For me, we’ve been at a point of some kind of entropy for a long time’, she told the Guardian.

The cream, incidentally, is somewhat informed by her 17 years of veganism. Phillipson told the i she has a ‘particular relationship to a substance such as cream’, adding that she finds it ‘almost more disgusting than the fly’.

Meanwhile, the drone is apparently a reference to the fact that the first surveillance cameras in Britain were installed in Trafalgar Square in 1960. Anyone can tune into the camera via the website, and spy on passers-by. What’s more, visitors are encouraged to stand underneath the sculpture and tune in with their phone, to take selfies of themselves from a drone’s eye view – making this cheap Banksy-esque touch more reflective of modern narcissism than Big Brother.

The End and ‘Volta’ comprise a jaundiced, misanthropic work which literally looks down on the parasitic masses, with their junk food and their doomed hunger for a happier, abundant tomorrow. It nods to all the woke obsessions, from eco-apocalypse to food panics, from Brexit to identity, with dollops of postmodern irony.

In its own way, The End is a significant achievement – it perfectly encapsulates the things about modern society that disgust the cultural elite.