The case for unicameralism

Behind the rows over who sits in the Lords, the real problem is that an upper house still stands. 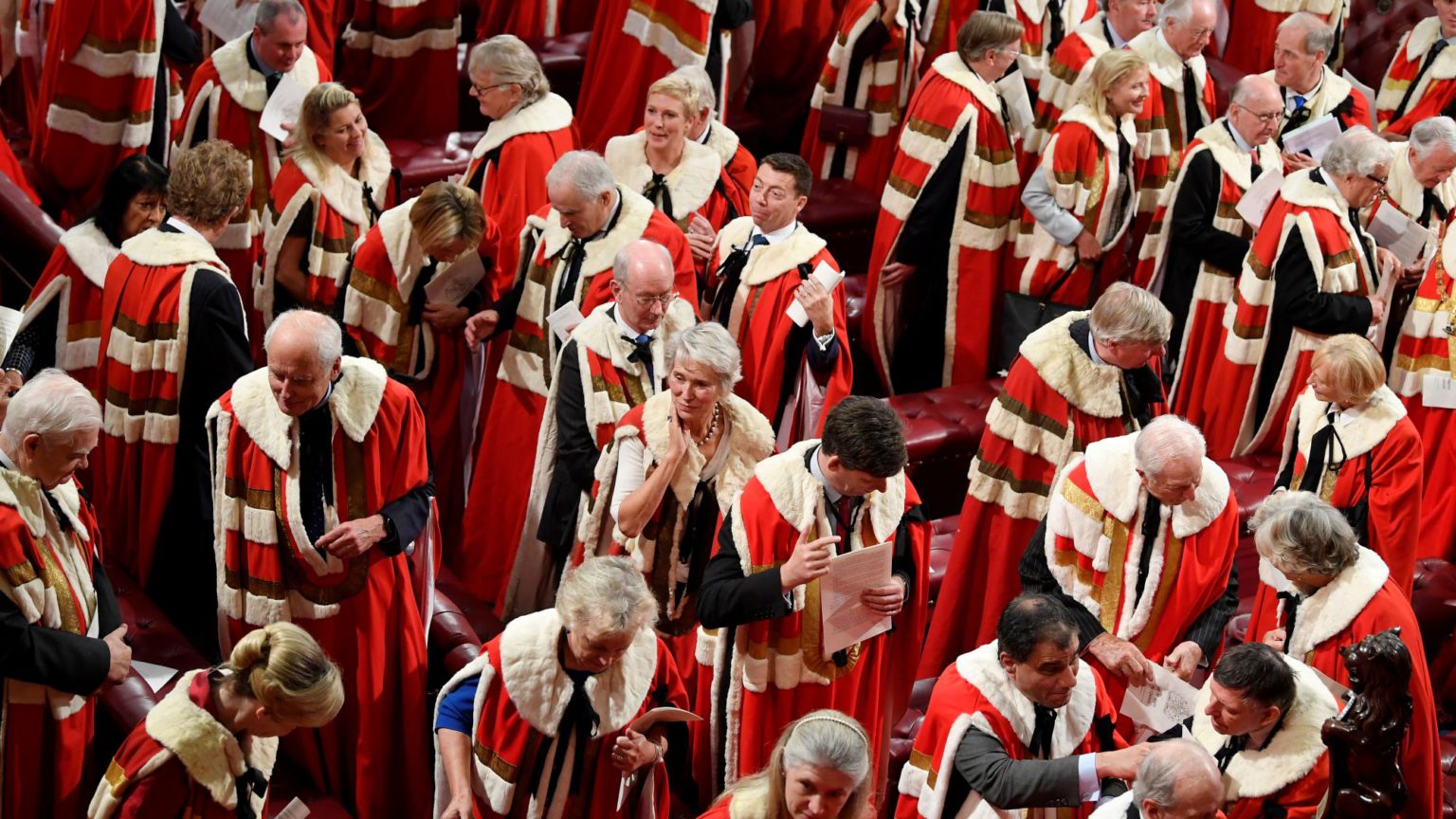 Former Labour Party leader Jeremy Corbyn has just made an official complaint to the Westminster authorities – over their rejection of his nominees for the House of Lords. This is what ‘British socialism’ has come to. Remember, Corbyn was the left-wing leader / messiah who in December asked us to elect him prime minister, on a manifesto promising ‘Real Change… For the Many, Not the Few’. Yet what has really got him mad today is the establishment’s refusal to change its mind and allow a few of his pals to dress up in ermine and swan about in the House of Lords.

Corbyn’s complaint confirms the dire state of radical politics. His rejected nominees included John Bercow, the arch Remainer ex-Speaker of the Commons who spent three years trying to thwart the democratic vote for Brexit, and Corbyn’s former aide Karie Murphy, who he reportedly ‘wanted to install in the Lords to work on trade-union rights’. And here we old-timers were, imagining that the way one might ‘work on trade-union rights’ would be by, err, organising trade unions in the workplace. Turns out the way the left fights for rights these days is by asking to sit on a committee in the House of Lords.

No doubt the Corbynistas’ bitterness over this ‘snub’ has been made worse by the Conservative government appointing several leading left Brexiteers to the Lords. These include former Labour MPs along with my old friend Claire Fox, who, as many outraged media and social-media commentators have reminded us, was the co-publisher of LM magazine (née Living Marxism), which I edited until it closed after being sued for libel 20 years ago.

As controversy rages over membership of the Lords, let’s get back to democratic basics. The issue is not which individuals get to be a baroness and which are refused entry. There should not be a House of Lords for anybody to join, however worthy. There is no place for empowering unelected peers in a democracy, where more than 800 of them already clog up the House and the system of government, whether in person or virtually during the current coronavirus closure.

Because the problem with the upper house is not who sits in it. The fundamental problem is that the House of Lords stands at all. The only reason the unelected, unaccountable Lords exists is to interfere with and block the democratic will of parliament’s elected lower house, the Commons. The Lords is not just undemocratic. It is inherently anti-democratic.

The Lords is no toothless talking shop – unlike, for example, the elected-but-impotent European Parliament. It is an unaccountable arm of state power and a bastion of the elites against the demos – the people. It should be abolished and replaced by a unicameral system, whereby parliament has only one, elected house to carry out the popular will, with no lords and ladies to tell the plebs downstairs to behave themselves.

(It is another sign of the degraded state of British democracy that the merits of unicameralism have never been seriously debated; one senior member of a political party I discussed it with last year had never even heard of the word.)

All parliamentary upper houses or senates exist to stymie popular democracy. The UK House of Lords is a particularly egregious example. For centuries it was home to Britain’s hereditary peers, aristocrats who inherited their wealth and power and wielded the Lords as a weapon to defend both. As Brendan O’Neill noted this week, after the English Revolution of the 17th century the Commons passed a law abolishing the Lords as ‘useless and dangerous to the people of England’. After it was restored, along with the monarchy, there followed a long struggle against the Lords to extend democracy and liberty in Britain.

After New Labour was elected, Tony Blair’s government abolished the automatic right of hereditary peers to sit in the Lords in 1999. Just 92 of them now remain, chosen by the rest of the UK’s 750 hereditaries – bizarrely, the only ‘elected’ members of the upper house.

Instead the Lords is now stacked with life peers, mostly former and failed politicians nominated by political parties through a system that reeks of patronage and corruption. (After kicking out most hereditary peers, Blair set the standard for co-opting allies in their place, though he would later refuse a peerage himself, saying that the House of Lords was ‘not my kind of thing’.) Filled with life peers, it remains just as unaccountable and elitist as in the bad old days. With more than 800 members, the Lords is now the largest parliamentary body in the world apart from the National People’s Congress of the People’s Republic of China – and it is every bit as democratic as that Stalinist stronghold. Why, for example, should the Liberal Democrats worry about having only 11 elected MPs in the Commons, when they have no less than 89 peers in the illiberal, anti-democratic Lords?

But the trouble with second houses goes even further than the unelected character of the Lords. No matter who sits in them or where they come from, no matter whether they are elected or not – all powerful upper houses and senates essentially exist as a brake on popular democracy.

That is why, through history, democratic revolutionary upsurges in England, America or France tended not to entertain an upper house to lord it over the demos. It is once the old ruling classes and new elites move to secure their power over the people that they introduce an upper house.

In the USA, for example, after the victorious American Revolution that began in 1776, the Founding Fathers were keen to restrain popular democracy. James Madison, who would become the 4th US president, argued for the American republic to avoid the mistakes of those ‘turbulent democracies of Ancient Greece and modern Italy’; even if every Athenian citizen had been a Socrates, he insisted, ‘every Athenian assembly would still have been a mob’.

Thus Madison set out the case for an upper house, the US Senate, to be empowered to protect the people from their own worst instincts, whether the masses were ‘stimulated by some irregular passions’ or ‘misled’ by demagogues to support measures which they would later ‘lament and condemn’. The Senate was duly created under the US Constitution of 1789, as a key part of a system of ‘checks and balances’ to control the ‘irregular passions’ of the demos. Senators are elected, albeit for a long term of six years. Each state gets two senators, regardless of population size, allowing the smaller, rural and often more conservative states to outvote the big urban population centres.

Back in modern Britain, Labour and the left have long had a problem knowing what to do about the House of Lords, lacking the bottle to fight seriously for abolition. In 1929, the exiled Russian revolutionary leader Leon Trotsky was scathing about the newly elected second Labour government’s willingness to toady to the establishment. In order to ‘show the old ruling classes that they are not simply revolutionary upstarts’, he wrote, Labour leaders were keen to bow to and join the Lords, to prove that they were ‘loyally devoted to the church, to the King, to the House of Lords, to the system of titles… to all the rubbish of the Middle Ages’.

More recently, Labour and the left have gone further, even fantasising about the unelected Lords as a radical political movement, supposedly the only defence against the ‘dictatorial’ governments elected in the Commons. (Today, unusually, the Tories do not have a majority in the Lords.) In 2018, during the battle for Brexit, left-wing house journal the New Statesman described the anti-democratic Lords, the rubbish of the Middle Ages, as ‘the left’s new best friend’. No wonder Corbyn is so desperate to get his pals in there.

Those who recoil in horror from the very idea of unicameralism, of having only one elected house of parliament, might note that it seems good enough for various other nation states, ranging from Sweden, Denmark or New Zealand to Hungary or Greece. Are we Brits so much more infantile than the citizens of those countries that we need to be nannied by lords and ladies? Some might worry that investing all parliamentary power in one, elected house could bring its own risks. But if there is always one thing worse than democracy, it’s the lack of it.

Introducing unicameralism would not, of course, provide the solution to all the problems of British democracy. Several major reforms are urgently needed, as spelt out by spiked writers last year in our programme for democratic reform, of which Brexit was only the first. But abolishing the House of Lords entirely is one crucial step. To turn around Madison’s disparaging view of Athenian democracy: even if every peer were a Socrates or a Trotsky, the Lords would still be a reactionary, anti-democratic mob.