Hiroshima: an experiment in extermination

The racial thinking that led to thousands being vaporised 75 years ago still hasn’t gone away. 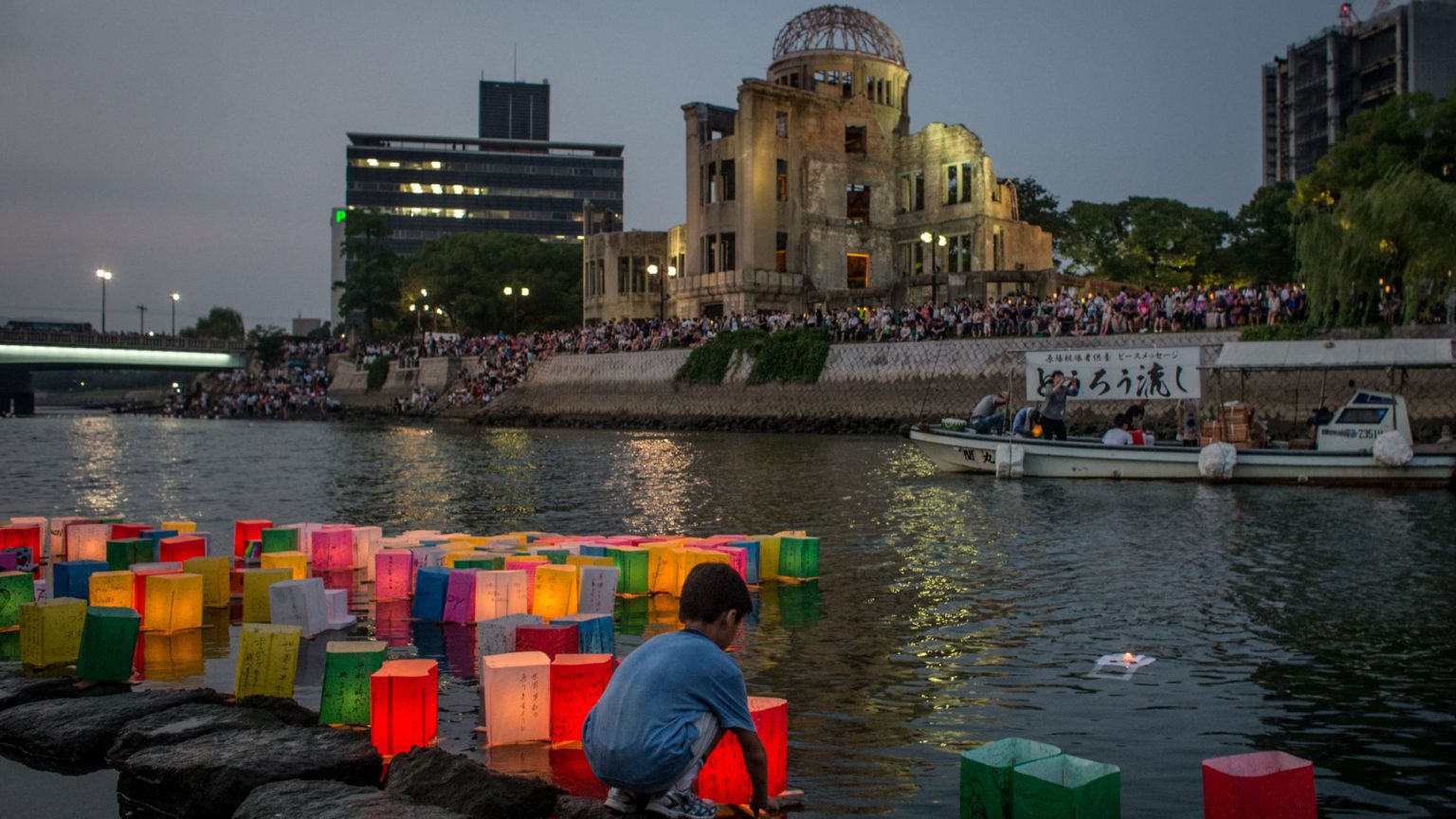 Today marks the 75th anniversary of the atomic bombing of Hiroshima. The clocks stopped in Hiroshima at 8.15am, as a B29 bomber, the Enola Gay, dropped its uranium bomb – nicknamed ‘Little Boy’ – on a predominantly civilian city of 340,000 people. Most of the city was obliterated. By the end of the year, 126,000 had died, the majority on 6 August. Three days later, another B29 dropped a plutonium bomb nicknamed ‘Fat Man’ on Nagasaki, wiping out a further 80,000 people. In all, an estimated 266,000 people were sacrificed for America and Britain’s extermination experiment.

WORLDwrite, the charity I run, visited Hiroshima with a group of young people 25 years ago, to mark the 50th anniversary of the bombings. It was fascinating, beautiful, and chilling. Viewing the shadows of the vaporised on the ground was almost as chilling as the experience we had with a group a few years earlier, who we had taken to the gas chambers at Buchenwald.

In Hiroshima in 1995, we were pretty much the only Westerners in sight. Today, Covid travel restrictions aside, Japan is a major tourist destination and the solitary A-bomb dome is a World Heritage Site. Vaporising thousands of civilians is no longer considered acceptable. Japan is no longer vilified as the enemy and Western militarism has lost its cachet. Even the Imperial War Museum now has replicas of Little Boy and Fat Man. But you won’t learn why Britain and America thought it was okay to drop them on Japanese civilians. Still not made explicit, or discussed in polite company, is the race war which propelled the West’s atomic payload eastward.

Seventy-five years on, Hiroshima and Nagasaki are worth remembering now more than ever, precisely because the racial thinking which justified the extermination of so many is back – albeit in a new form. In 1945, the Japanese were seen as different – a different race. They were rats, locusts and beasts, as American propagandists put it at the time. They were not like us and therefore their obliteration was perfectly fair. These ideas about race were not only promoted and acted upon by fascists (as in the Nazi’s extermination camps), but also by respected world leaders – specifically President Truman, a Democrat, and the UK’s Labour prime minister, Clement Attlee. Even trade-union leader Ernest Bevin sat on Britain’s atomic bomb committee in August 1945.

Our exchange visit to Hiroshima set out to challenge the backward, racial thinking that had justified these bombings and to tell the truth about the war. People needed to know that this was a race war, that the Japanese were viewed as vermin to be eradicated and that Japan was already on its knees when this great experiment in human annihilation was conducted. The idea that the bombs ended the war and were some great humanitarian peace initiative was one big fat lie. This was racism doing its worst – not like today where people are ‘triggered’ by rude words or offended by statues, this was the wholesale slaughtering of a people.

We set up our charity WORLDwrite back in 1995 specifically to challenge these anti-human ideas and to promote the fact that there is only one human race. Twenty-five years on, it seems we have to revisit this basic premise and again challenge the wholly destructive idea of race. The Nazis thought there were four or five biologically distinct European races and ranked them – with Jews considered a species of subhuman and entirely expendable. They were murdered in their millions.

In the postwar period, after the horror of the Holocaust, the idea of biological racial difference was so discredited and scientifically refuted that it was largely ditched. Scientists pointed out that there was more physiological variation within one remote tribe in the Brazilian Amazon than across continents or between people with black or white skins. But the biological categorisation of race was quickly replaced by ideas of cultural or ethnic difference in the postwar period. The idea that people could be grouped or categorised in the social rather than the genetic world has gathered pace ever since.

Today in the UK, for example, the government classifies us in five major groups and 18 ethnicities in all, supposedly because we are so ‘different’, to check how we are doing. People rarely ask ‘what race are you?’ so explicitly, but such classification is of course still based on us having immutable differences. It fixes us culturally and fails to see culture as fluid and changeable according to where we live or what we do or believe at different times in our lives. What if you grew up a Catholic and became a communist, or were born into a Muslim family and became an atheist? What if you are white with a black dad?

Categorising us and then declaring us all different but all equal is meant to sound right-on and radical. In fact, it has always been nonsense. What makes us equal if we really are all so different because of some apparent cultural-group characteristic?

It is shocking, yet hardly surprising, that the great compromise – replacing biological racial categories with cultural and ethnic categorisation – has now helped give racial thinking a new lease of life. Our grievance culture, too, where victim status ranked according to cultural identity provides greater or lesser entitlement to resources, feeds these ideas.

But as human beings, we are not different, regardless of our tastes, where we were born or what we look like. We should be treated equally because, unlike animals, we are not different species or subspecies, but rather are all one and the same race. Anti-racism used to mean recognising that the very idea of multiple races was backward, divisive and dangerous. For serious anti-racists in the past, categorising people by race or ethnicity could never be justified and would always mean treating people differently and legitimising inequality – as indeed it did.

Yet, today’s identity politics would have us worship the idea of racial difference once more. Writers like Robin Di Angelo have even re-designated the understanding that there is only one human race as a racist idea. It’s an idea, they say, perpetuated by a race of white people who are innately privileged, can’t admit it and therefore have to deny their difference. Today’s identitarian thinkers effectively reassert old-fashioned biological racial differences and have even reinvented a racial hierarchy.

What’s even more extraordinary for people of my generation is that so many people are taking this backward racial thinking on board – or are at least afraid to challenge it for fear of being labelled ‘racist’. I made a film a few years ago with 100 young people about the great Trinidad-born revolutionary CLR James (a black man), and even people I know and respect have said I shouldn’t show it and run a discussion on it because I’m a white woman. It is not the right moment to do that, they say. So when should we take a stand against racial thinking?

We need to be brave, to challenge the dangerous racial thinking which sets us apart and which, 75 years ago, justified vaporising thousands and thousands of people because they were ‘different’. There is only one human race and we have to say it ever louder today.