Boris should ditch the nanny-state crap

This war on obesity is an attempt to divert attention from his handling of coronavirus. 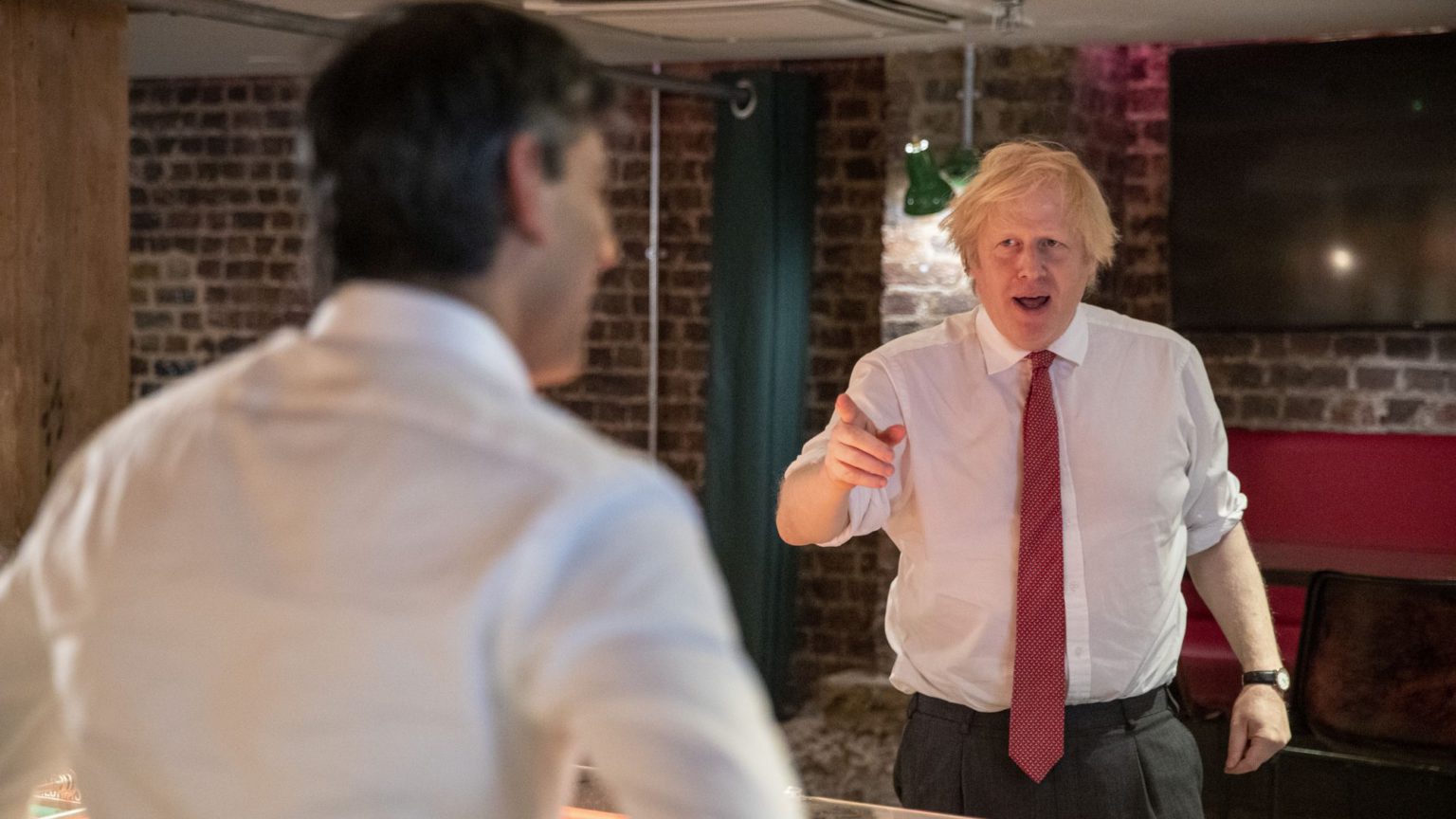 Throughout the visitation of Wuhan Virus, there has been a palpable desire from certain quarters to find a lifestyle factor to blame. After years of being told that tobacco, booze and sugar represent the greatest public-health epidemics the world has ever seen, we have learned to associate bad health with bad behaviour as surely as our forebears associated plague with heresy.

The World Health Organisation (WHO) provided a little lockdown placebo with its #HealthyAtHome campaign, telling us to protect ourselves against Covid-19 by avoiding butter, full-fat milk, sweets and sugary drinks. By following these and other longstanding healthy-living tips, such as limiting our intake of ‘ready-to-drink tea’, the agency claimed we would strengthen our immune systems and fend off the virus.

Evidence for such assertions is hard to find, as is evidence that there is ‘no safe level of alcohol consumption’, but that has not stopped the WHO saying it. Many ‘public health’ groups insisted that abstinence from alcohol can protect individuals from the coronavirus (again, by strengthening the immune system), but when empirical evidence emerged, it showed drinkers to be no more likely to suffer severe symptoms from the disease than teetotallers.

From the outset, ‘public health’ groups were sure there must be some connection to smoking. There always is, isn’t there? In early April, Public Health England announced that smokers were 14 times more likely to develop severe Covid-19, a conclusion derived from a pitifully small Chinese study of 78 hospital patients in which three out of the five smokers became seriously ill. In retrospect, Public Health England should have paid more attention to there being so few smokers in the hospital in the first place. A mountain of evidence has subsequently been amassed showing smokers to be significantly under-represented in coronavirus wards, with the strong suggestion that they are less likely to contract the disease. Public Health England has since published a review of Covid-19 risk factors which conspicuously failed to mention smoking at all, surely a first for that august institution. But it has not retracted its earlier claim.

Finding a lifestyle scapegoat for Covid was proving tricky, so it must have come as a relief when it turned out that ‘people living with obesity’ (as we are now required to call them) were at greater risk of developing severe symptoms. A British study found that mild obesity increases the risk of death from Covid by 27 per cent, rising to 127 per cent for morbid obesity. This makes living with obesity about as risky as living with being male, but it was enough for the chairman of Action on Sugar – who is no stranger to hyperbole – to declare that ‘the food industry shares the blame not only for the obesity pandemic but also for the severity of Covid-19 disease’.

Crucially, Boris Johnson is now fully on board the anti-obesity bandwagon, partly because of his own experience as a fat man with coronavirus and partly because it diverts attention from his government’s own handling of the crisis. When he claimed this week that Britain would be ‘more resistant to diseases like Covid if we can tackle obesity’, the clear implication was that we would have fewer deaths if we didn’t have one of the highest rates of obesity in Europe.

This is probably untrue. The biggest risk factor, by far, is old age. If being obese is as unhealthy as they say, countries with more obese people will have fewer old people and, therefore, a lower Covid-19 death count.

Be that as it may, what is Johnson going to do about it? Like Tom Watson, he has recently lost weight thanks to exercise and self-discipline. Will he conclude that anybody can do the same or will he conclude, à la Tom Watson, that the little people are too weak-willed and therefore need the firm hand of government?

According to the Telegraph, Johnson has a range of measures in mind, including ‘wider use of bariatric surgery’ and ‘increasing access to exercise and healthy eating schemes’. More worryingly, there is talk of ‘banning price promotions such as “buy one, get one free” offers’. Advertising could be restricted and there is talk of a new law to ‘force restaurants, cafés and takeaways to label the calorie content of their food’.

If some of these ideas seem familiar, it’s because they have been hanging around Whitehall like a bad smell for years. In his efforts to tackle the non-existent childhood obesity epidemic, David Cameron approved a raft of nanny-state measures in 2016, including a ban on so-called ‘junk food’ advertising on television before 9pm, but he left office before a public consultation could be launched.

Most of his proposals were ditched under Theresa May, reputedly at the insistence of her adviser Fiona Hill. When a slimmed down ‘Childhood Obesity Plan’ was published in the summer of 2016, the likes of Action on Sugar screamed blue murder about the lack of bans, taxes and regulations. Cameron’s original draft was soon leaked to Channel 4, whose Dispatches programme described it as ‘the secret plan to save fat Britain’.

In the wake of the disastrous General Election campaign of 2017, Fiona Hill left government and Theresa May capitulated to the ‘public health’ lobby by resurrecting the Cameron policies in Chapter Two of the Childhood Obesity Plan, published in June 2018. A long public consultation was announced and the whole thing was forgotten about while the government grappled with Brexit. It became Boris Johnson’s problem when he replaced Theresa May in July 2019 and it has been lingering in the in-tray ever since, like the Ghost of Christmas Past.

There is a good reason why these policies have been passed from pillar to post for five years. They are terrible. It is not so much that they will annoy the Tory party’s negligible libertarian wing, but that they are ill-conceived, costly, largely unworkable and will almost certainly be ineffective. Chapter Two of the Childhood Obesity Plan is a wish-list of bone-headed ideas devised by ‘public health’ mid-wits who know nothing about business and next-to-nothing about food. They see added costs and inconvenience to consumers as a feature rather than a bug, and regard disruption to the food supply as a sign of success.

Calorie labelling in restaurants, for example, is a nice idea until you put yourself in the shoes of a chef who has to get a scientific assessment every time he wants to make a dish of the day (he will then need to ensure that every serving size is identical).

A ban on price promotions will be a kick in the teeth to thrift shoppers, and while a ban on junk-food promotion might not sound too objectionable, there is no legal definition of ‘junk food’. The nearest equivalent is HFSS (High in Fat, Sugar and Salt) and that includes butter, jam, sausages, cheese, olive oil, mustard, raisins and countless other products that are generally considered safe to consume.

The main foods that are not considered ‘junk’ under the government’s puritanical definition are fresh fruit and vegetables, raw meat and unprocessed nuts, none of which is widely advertised because they do not have recognisable brands. That leaves commercial broadcasters in trouble if there is a watershed advertising ban. Hundreds of millions of pounds are at stake, and if this money is diverted towards other media you can expect worse TV programmes, more repeats and fewer television channels.

Taken together, the proposals will be a nightmare for legislators, manufacturers, retailers and consumers alike. The Department of Health is keen on them. The rest of government, not so much. This is why they have been half-buried for so long. They will put sand in the gears of the country’s biggest industry at a time when the economy has never looked shakier, but a decision cannot be put off indefinitely. Either Boris ditches the nanny-state crap and invites the outrage of the ‘public health’ lobby, or he pushes it through under the cover of coronavirus.

The smart move would be to ditch it and come up with some constructive policies around exercise, cooking and education instead. The people who will be outraged would never vote Conservative and can never be appeased. Even if the government gives them what they want, they will be back the next day with a new list of demands and the same furrowed brow.

Alternatively, he could give the Cameron-era policies the green light and attribute his conversion to a near-death experience. But having spent much of his career berating the nanny state and singing the praises of Merrie Olde England, going ahead with the kind of heavy-handed, paternalistic regulation that even Theresa May got cold feet about could make the public conclude that he is no different to the rest of them.

Christopher Snowdon is director of lifestyle economics at the Institute of Economic Affairs. Buy his new e-book, Polemics.