The lockdown is tearing at Ireland’s social fabric

Conversations are stilted, salutations absent, and the church has shut down with barely a whimper. 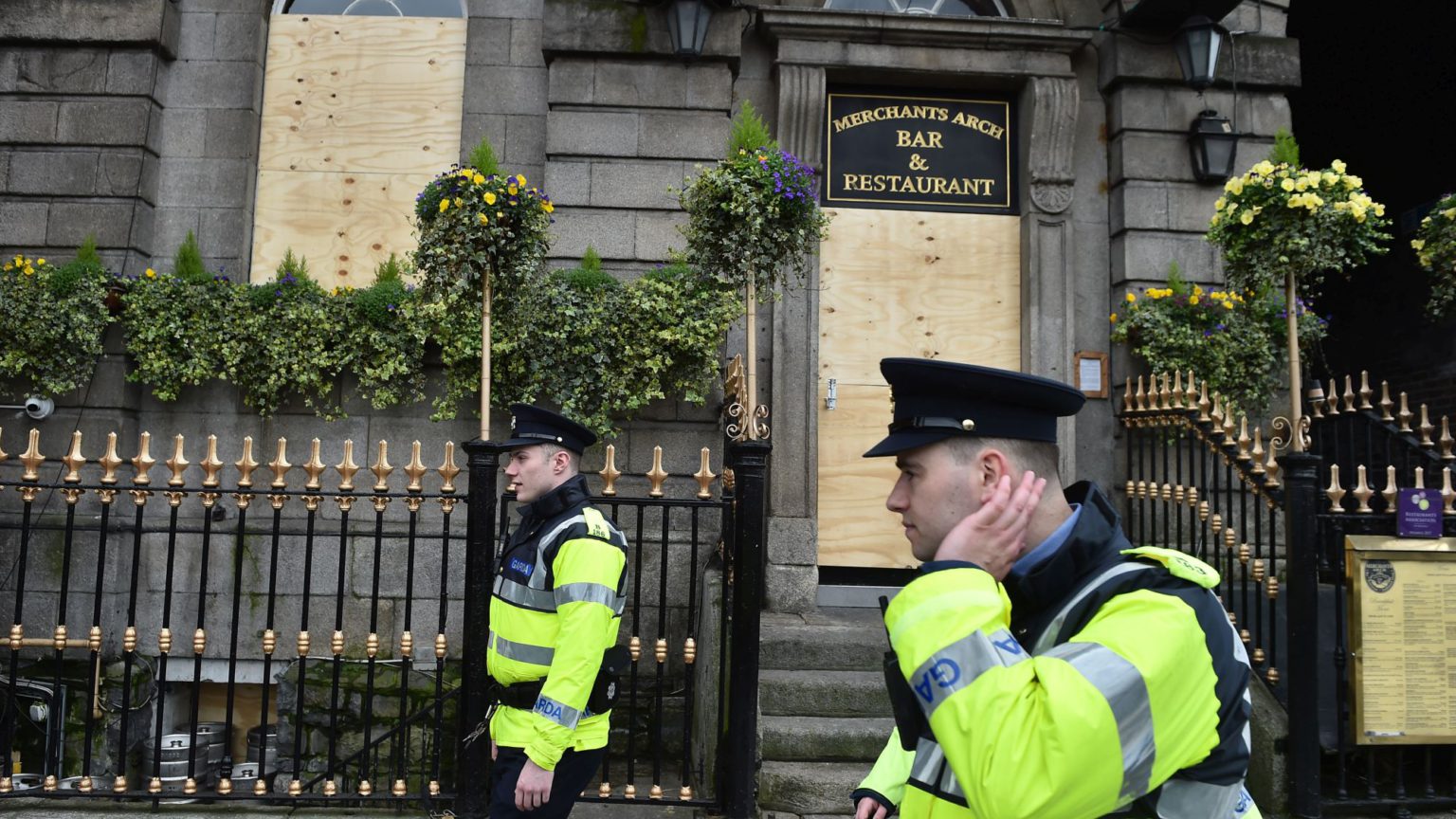 His parting comment, ‘There’s going to be an awful lot of feckin ghost towns in this country after this!’, was uttered in a tone of exasperation and foreboding. The stocky grey-haired man, born and bred in this medium-sized rural town in south-west Ireland, was speaking to me as we left the newly reopened kebab shop on the main street.

It had taken the full 15 minutes waiting for our respective orders, sounding one another out, to arrive at any degree of candour. The flow of conversation in this town was once as free flowing as the renowned trout-and-salmon river, but it had been reduced to a trickle in the aftermath of the unprecedented Covid-19 lockdown imposed in Ireland since mid-March.

It is not just the ‘social distancing’ which is creating such tight-lipped reticence. There also seems to be something else at play. It is as if people are reluctant to speak their minds, because to express fear, doubt, or even ambivalence about the lockdown policy pursued by our managerial elites has become socially unacceptable in many circles.

Fear of the virus is real, and justified. But there is also a fear around even contemplating whether this colossal infringement of our civil liberties, as well as this huge enforced economic seizure, may not have been the best course of action. As a result, there has been no serious public dialogue or debate about the policy pursued. There has only been unlimited discussion of how it can be best implemented, as well as interminable reiterations of its necessity. It seems ‘The Science’ has spoken, and Ireland’s exceptionally tame and uniform media have shown little willingness to explore the contending views on the pandemic within the global scientific community.

A fairly elaborate verbal game has now evolved to cope with the difficulty of talking about the lockdown. When conversations occur, often in queues, many start with the non-committal, but thought-provoking favourite, ‘Strange times’. It is an opening gambit that can go either way, but often evokes a resigned-sounding response along the lines of ‘indeed they are, won’t be forever’. This is a cue to engage in an uncritical dialogue, in which there are a host of directions the conversation can then take: the hope of ‘the vaccine’ is a favourite; another is to scoff scornfully at what has happened in the US and the UK – ‘that fella Trump’ or ‘Boris’, and now, of course, ‘yer man Cummings’, all receive ample doses of safely dispensed ridicule. The subtext, derived from our own media’s coverage of the pandemic, is that they ‘got it all wrong’ and ‘we didn’t’, governed as we are by sensible and moderate leaders well respected in the EU.

Such media-led habitual ‘Brit Bashing’, has been in vogue particularly since the perceived catastrophe of Brexit. You will wait a very long time indeed to hear anyone opining that the ‘Italians made a right bags of it’, or that ‘Belgium is getting a right pasting from it’.

Even when our now unelected Taoiseach Leo Varadkar picnicked bare-chested in the Phoenix Park, among a group of friends, contrary to the guidance issued by his own government to ‘not to stay too long at the site or have picnics’, the Irish media’s response was extremely relaxed. (No baying mobs of reporters outside Leo’s residence.) Could it possibly be that his affinity with the cultural and social value system of Dublin’s notoriously incestuous political and media elites, and his at times cravenly pro-EU outlook, has completely immunised him from the type of witch-hunt visited upon the family of Dominic Cummings in the UK?

There does appear to be a class dimension to the breadth of responses to the lockdown. A significant number of service workers have had to work throughout the entire crisis. And these people, who have not been the beneficiaries of an indefinite period of paid ‘furlough’, generally seem to exude a spirit of positive resilience.

If the workers keeping the essential services going are the bastions of vigour, there is no shortage of individuals evincing the opposing qualities of fragility, fear and, in some cases, a compulsive preoccupation with Covid-19. Some, such as the elderly, are fearful with good reason. Yet, in this town at least, the elderly are displaying a degree of positivity matched only by the essential workers. One spry 89-year-old, with his trilby and walking stick twirling, and 40 years working ‘on the buildings’ in London and Birmingham behind him, always stops to talk with all and sundry on his evening walks by the river. ‘I survived working for Murphy’s in unshored trenches’, he says, ‘sure I’ll survive this’.

The seemingly most fearful and apparently fragile are often female, in the 30-to-50 age range, and are furloughed from often public-sector jobs. Moving briskly at most times, often wearing (patterned) masks, and very rarely making eye contact, these exemplars of all things lockdown and social distancing have also taken a vow of silence, which marks them out in rural Ireland, where verbal salutation between strangers is still commonplace. They also refrain from the nod of the head, and even the quintessentially Irish slightly raised forefinger.

Among this zealous group can be found the devotees of the ‘Covid-Swerve’. Even on a path five or six metres wide, especially if bounded by grass, the swerve can start up to 10 metres before passing, and involves a ludicrous and completely unnecessary incursion on to the grass, before rejoining the pathway once safely passed the person walking towards them. It is odd and sometimes funny to behold, but it never feels good to be swerved.

A much sadder aspect of the pandemic’s impact upon life in Ireland is its effect on the burial of our dead, and the very traditional Irish rituals associated with it. These rituals are greatly respected by the vast majority, and are a great source of solace and solidarity for bereaved families. In Ireland, the ‘removal’, where large numbers of the community visit the family and pay their respects, either in family homes or in funeral parlours, are big affairs. People will attend in their hundreds, and churches are fairly full for the Requiem Mass the next morning. Now, however, removals are no longer permitted and attendance at the Requiem Mass is limited to between 10 and 15 mourners. Remarkable as it may seem for anyone remotely familiar with the centrality of the Eucharist to the Roman Catholic Mass, there is no Communion distributed.

Of course, all masses and religious services were ordered to cease with the lockdown. It was still surprising, however, that the Catholic Church, once far too politically and socially powerful in Ireland, ‘went down like a sack of spuds, without a whimper’, as one person put it. Imagine, Ireland without the mass. Not even the hated Penal Laws imposed by the British from 1695 until 1829 achieved that.

Attending a lockdown funeral is not something that I will easily forget; the strangeness of being one of 15 mourners in a church which can comfortably hold 800 compounded the sadness. Amid it all, one could not help but reflect on the seemingly boundless authoritarian impulse which has gripped our land. Could not that cavernous church easily have held 100 mourners while still adhering to ‘social distancing’? Surely it could not be beyond human ingenuity to devise a ‘safe’ way that mourners could take Communion?

What is missing is any consideration being made by our political class as to the possibility that people are capable of weighing risks, and taking sensible actions. We are infantilised, and the hitherto very patient tolerance of it is wearing thin.

GJ Mournane is an academic living in the south west of Ireland.