The pandemic must not be used to silence protest

Thousands have gathered in Germany against the lockdown. They must have every right to. 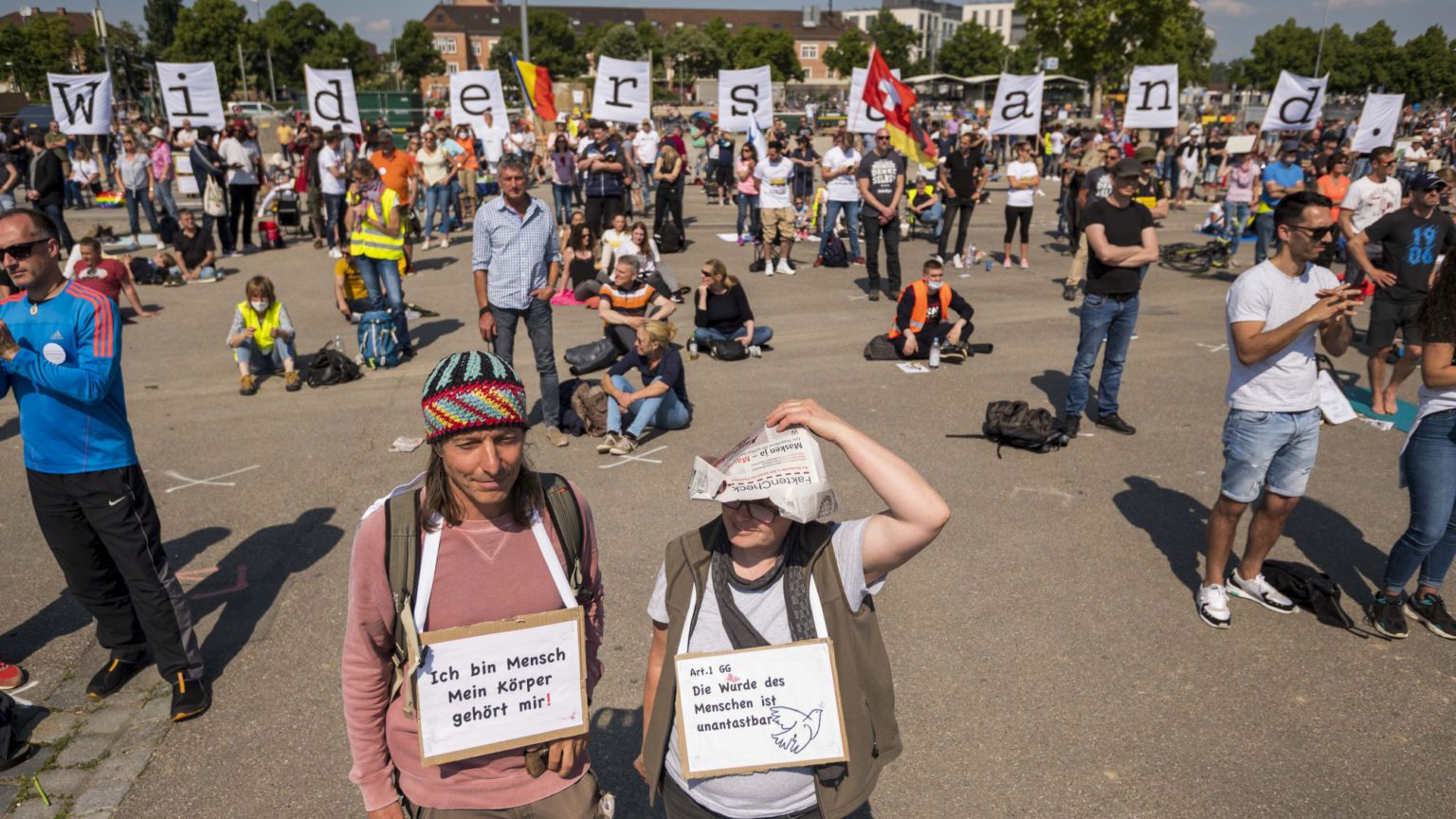 Who cares about the German constitution? Barely a year has passed since German president Frank Walter Steinmeier complained that Germans knew too little about their Grundgesetz or Basic Law. And until a few weeks ago, not very many were interested in it. Mentions of it were mainly limited to the dry speeches of politicians. But as more people have been joining illegal (or semi-legal) demonstrations against the government’s coronavirus measures, this has changed.

At the weekend, thousands of people gathered in different cities across Germany to protest against the lockdown. Demos took place in Berlin, Frankfurt, Munich and elsewhere. The largest demo, in Stuttgart, had over 5,000 people in attendance. Many participants were waving copies of the Basic Law.

But far from being seen as decent, politically aware citizens, the protesters have been branded stupid, irresponsible and dangerous. ‘Three thousand demonstrators… without face masks have done everything to ensure that there will soon be stricter anti-corona measures again. Thanks for nothing, you morons’, tweeted the chairman of the Bavarian Free Liberal Party (FDP) after the protests in Munich.

Much of the media have dismissed the protesters as ‘conspiracy theorists, extremists and anti-vaxxers’. Tellingly, even the term ‘conspirators’ – usually reserved for people plotting acts of evil or crime – has been used to describe them. ‘Politicians must not be driven mad by confused conspirators’, says a writer in Der Spiegel. Germany’s intelligence service has issued warnings that far-right groups could be infiltrating the demos.

The protesters are using Germany’s Basic Law to put pressure on state governments to let them assemble. The Basic Law was drawn up following the Second World War and the Nazi terror. Article 8 states: ‘All Germans have the right to assemble peacefully and unarmed without prior notification and permission.’ Of course, the right to assemble has never been uncontested – many have objected to the right of neo-Nazis to march, for instance. But the arrival of Covid-19 caused the authorities to suspend free assembly overnight.

Of course, the reason given for the suspension is always that gathering in groups could speed up the spread of the disease. But it is also clear that no government would dare to suspend a fundamental right without giving a reason. Is it not a sign of healthy scepticism to question the motives of those who hold power?

The disputes over Article 8 are interesting for another reason, too: they show that even when they are set in writing, constitutional rights are not necessarily respected. Can those in power change the constitution at will? Not quite. And after a legal challenge by some demonstrators, Germany’s constitutional court has now ruled that the suspension of Article 8 is indeed illegal. Yet the coronavirus restrictions remain in place. Some federal states, unable to ban protest outright, have imposed an upper limit to the number of people who can assemble (Berlin, for example, limits the number of outside gatherings to 50 people and the same applies for protests).

No doubt many commentators are sincere in fearing that the demonstrations could become new hotbeds of Covid-19. But protests have now been taking place for weeks, and infection rates have remained low. This cannot, therefore, be the sole reason for vilifying the protesters.

The fear of the virus goes alongside another fear: the fear of the masses. These protesters are the wrong kind of people to be demanding that their rights be respected, commentators seem to be saying. Some have nervously noted that the public mood is changing. ‘Corona could lead to the next big split in society’, they caution. There are fears that the lockdown will lead to the kind of divides Germany last saw in 2015, when people took to the streets to protest against the government’s refugee policy.

It is right to say that society is starting to cleave. But that divide has been caricatured to the point of absurdity. Some writers gloat that it represents a divide between clever and stupid (one writer warns of a rapidly growing ‘herd stupidity’), conspiracy theorists versus the science-respecting mainstream, and right-wing versus liberal.

Such lazy caricatures have very little to do with reality. Certainly, some of the protesters do espouse conspiracy theories. There is also no shortage of right-wing groups, freaks and self-promoters who have tried to act as the mouthpieces of the protests. (Much has been made of the fanatic vegan cook, Attila Hildmann, and the discredited 9/11 truther, Ken Jebsen, both of whom joined protests.)

But this says very little about the majority of the participants. In our survey-fixated time, it is surprising how little effort is made to find out what the majority of protesters really think. Wherever protesters have been interviewed on TV, many have voiced sensible concerns about the government’s lack of trust in its citizens, the continued closure of schools, the mockery made of those who voice dissenting views, and the lack of a clear strategy for returning to normality. It is also interesting to note that wherever the organisers of the protests appear to be down to earth and balanced (in Stuttgart the organisers are a medical doctor and an IT specialist), more people seem ready to join.

Much of the criticism of the people joining the demonstrations is a barely concealed demand for conformity. But since when should a dangerous virus force us to bow to authority? Even the oft-repeated claim that the demonstrators are putting our easing of the lockdown at risk is telling. The opposite is the case: it is only thanks to public criticism that the government has moved away from its earlier, much stricter policy.

That is why the protesters deserve our goodwill, even if we might not agree with all of their views. The right to assemble must be fully restored, because, as Franz Neumann – a left-wing political scientist, German émigré, and anti-Nazi – wrote in 1937, it not only guarantees the individual a sphere of freedom, but it is also ‘a means by which the democratic production of the public will is made possible’. Sadly, it is exactly this free and democratic production of the public will that so many find so frightening.