The fall of the liberal elite

Adrian Pabst’s The Demons of Liberal Democracy provides a vital takedown of the new establishment. 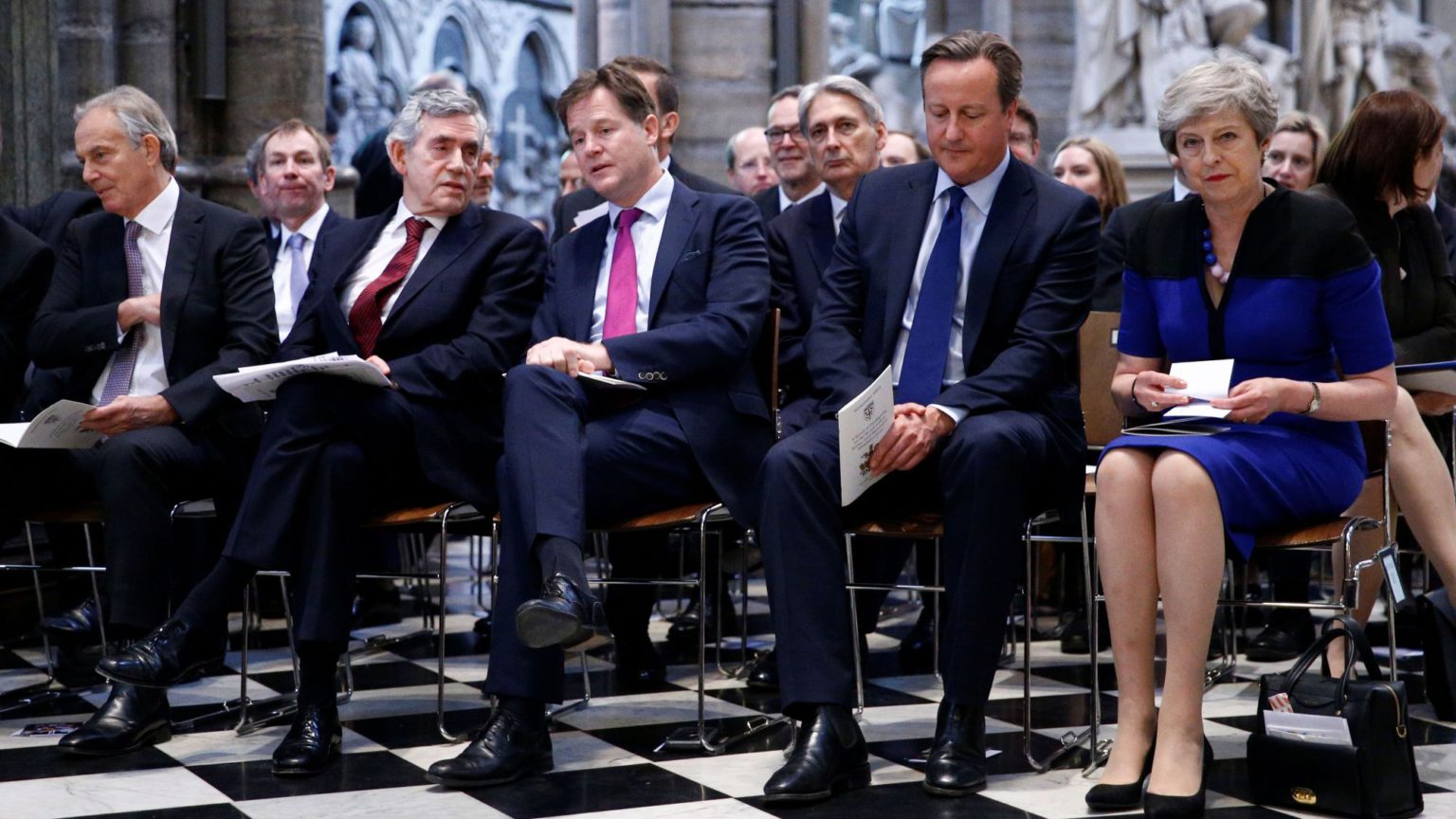 Thirty years ago, as the Cold War came to an end, Francis Fukuyama published his seminal essay ‘The End of History?’. He argued that human development had reached its end point in the form of a liberal democratic state underpinned by a market economy. A generation later, most political commentators agree that liberal democracy is not in good shape. Even Fukuyama is now at pains to point out that his essay had a question mark at the end of the title.

Adrian Pabst, a politics professor at the University of Kent and influential force in the Blue Labour movement, has added his voice to today’s critics of liberal democracy. In The Demons of Liberal Democracy he criticises the post-Cold War development of liberal democracy by describing how it has morphed into a political system characterised by the four demons of oligarchy, demagogy, anarchy and tyranny.

Pabst explains how each demon is a feature of a modern society that has elevated minority interests over the collective interests of society. He argues that economic power has been concentrated in the hands of unaccountable elites, especially with the monopoly power of tech giants and global finance (oligarchy). Public debate is susceptible to being manipulated by unrepresentative elites (demagogy). Social cohesion has been ruptured by social policies that have elevated individual freedoms at the expense of shared interests (anarchy). And by drawing these three demons together, Pabst argues that liberalism itself is beginning to resemble tyranny as its underlying values of free speech, free inquiry and tolerance are themselves eroded.

The extent to which each of these demons corresponds to reality can be debated, but few would doubt that they capture, up to a point, an underlying reality. Pabst does not blame liberalism per se for this descent into a society that fails to serve collective interests. He notes that ‘the liberalism which has failed is not the whole liberal tradition, but rather a contemporary radicalisation of specific ideals’. Liberalism, he argues, has become one-sided, a form of ‘hyper-liberalism’, because of its celebration of individualism, while the liberal tradition that elevated social solidarity has been largely ignored.

Equally, Pabst does not blame democracy for the development of this one-sided liberalism. Indeed, he notes how a ‘genuine democracy tries to reconcile estranged interests in a negotiated settlement based on leadership and popular participation’. He also points to how democracy could be the antidote to the individualistic liberalism that has spawned his four demons. As he rightly observes, democracy ‘involves the forging of a common life around shared principles and practices that seek to balance freedom with fraternity, equality with reciprocity, and tradition with modernity’.

So, if liberalism is not to blame and if democracy ought to have paved the way for the social solidarity that hyper-liberalism has undermined, why has liberal democracy developed in recent decades as a celebration of minority interests?

In a revealing section of The Demons of Liberal Democracy, Pabst explores two problematic approaches to modern-day social policymaking. On the one hand, there are liberals who see social policy as being determined by science and instrumental rationality, a hallmark of today’s technocratic elite with their ‘evidence-based’ policy solutions. And on the other hand, there are liberals who base their approach to policy formation, not just on science, but on a broader form of discursive reasoning — the preserve of, as they see it, an enlightened intelligentsia. These two liberal approaches to policy formation have much in common in that they vest a superior class with the right to develop public policy. Pabst calls these people the ‘liberal elites’.

Pabst explains how the liberal elites have drawn ideological strength from both the left and the right. The New Left, from the mid-1960s onwards, took socialism away from working-class interests, with its embrace of identity politics and a narcissistic focus on ‘the personal being the political’. This resulted in a left that ‘preferred progress to tradition, identity to class, and free choice to common purpose’. This approach suited a middle-class stratum of professionals and public-sector managers, while alienating most ordinary workers. The New Left enabled left-wing politics to jettison the interests of ordinary working people in favour of the interests of the liberal elites.

Slightly later, a New Right was formed that combined a libertarian economics with a corporate capture of the state. Pabst notes how this ‘had the effect of aligning conservatism with borderless capitalism and with individual freedom devoid of mutual obligation’. It was, he argues, an ‘unholy alliance of fundamentalist faith with an aggressive consumer culture’ that ‘trumped the historic commitment to citizenship’. This re-positioning of right-wing politics has also served the interests of the liberal elites.

Pabst notes that the ‘problem today is not “elitism” itself’, because in any society there will be elites that are vying for influence. But he then claims that the problem with contemporary elites is that they are ‘corrupt’ and ‘lead by bad example – actively promoting greed and selfishness’. Accordingly, he concludes that today’s elites need ‘educative guidance’ to become ‘virtuous’ at ‘every level and in every field’.

It is at this point that Pabst’s argument falters. It cannot seriously be argued that the monopoly power of tech giants and global finance can be overcome by telling their leaderships to be less greedy and less selfish. And neither will the policymaking elites, following a spot of educative guidance, give up their assumed right to make policy in their own image. Pabst’s accurate description of how the liberal elites have drawn strength from the New Left and the New Right shows that the elites are bolstered by ideologies that have reasonably broad and deep roots. The liberal elites’ ideological underpinnings need to be countered with an alternative ideology, not a lesson in virtue.

Pabst fails to note the distinctive feature of contemporary elites. It is not just that they govern (a timeless descriptive fact); it is that they govern in accordance with their own interests (a contemporary political problem). In an earlier era, elites sought to govern in the interests of society as a whole. Traditionally, the values held by the captains of industry, trade union leaders, academics, professionals, civil servants and the political class more generally connected with views that were widely held within broader society. Political debates took place along class-based lines, which were reflected in shades of opinion between the left and the right. Within this class-based framework the elites responded to democratic pressure and ruled according to democratic sentiment somewhere on the left-right spectrum.

But as class-based politics declined, a new elite-based politics arose. Conflicts between bosses and workers, the left and the right, abated and new conflicts arose between the leaders and the led, the elites and the people. This is new and important, and it is a point that Pabst does not grasp. Society is now being shaped by liberal elites with policies that serve their interests, and which are hostile to the interests of society as a whole. The hyper-liberalism that Pabst so accurately describes is a politics of the elite, by the elite and for the elite. Once this key fact is grasped it becomes clear that the elite is beyond the sort of ‘educative guidance’ that Pabst advocates.

The antidote to the demons of liberal democracy will come from channelling the people against the elites. Yet this is a project that Pabst rejects. He characterises the current division in society as being between the liberal elites and the anti-elite insurgents. In doing so, he overlooks the people in order to focus on their populist leaders, like Donald Trump, whose movement he dismisses as ‘built on conspiracy theories, misinformation’ and ‘naked appeals to both bigotry and race’. By framing the current divide as being between the elites and their Trump-like insurgents, Pabst can dislike each with equal vigour. It enables him to argue for a third force, a revival of ‘intermediary institutions’, such as professional associations, trade unions, universities and free hospitals. By ‘intermediary’ he means institutions ‘that stand between these two poles’ of the liberal elites and their, as he sees them, insurgents.

Pabst sits in a long line of utopian reformers who dislike what they see in contemporary society and write blueprints for their alternative better, fairer society. But their alternatives are utopian because they cannot connect with a political force capable of bringing them about. Across the Western world today, elites are being challenged by ordinary people. These are the people who can change society for the better. Their current leaders, like Trump, may be flawed, but the task for any social reformer is to connect with people’s experience and direct it. The ability to do this separates the effective reformer from the utopian dreamer.

There is much to admire in The Demons of Liberal Democracy. But his analysis is better than his prescription. For while he gets close to recognising the pernicious role of today’s liberal elites, he distances himself from the force that can confront them. Ultimately, Pabst is not against elite-based politics. He just wants a different and re-educated elite that shares his communitarian approach. His desire to re-educate the hyper-liberal elites to make them ‘virtuous’ and communitarian will achieve nothing. The demons of liberal democracy will only be slayed with a popular politics that is of, by and for the people.

The Demons of Liberal Democracy, by Adrian Pabst, is published by Polity Press. (Pre-order this book from Amazon(UK).)