The shutdown has brought nothing but chaos, violence and misery. 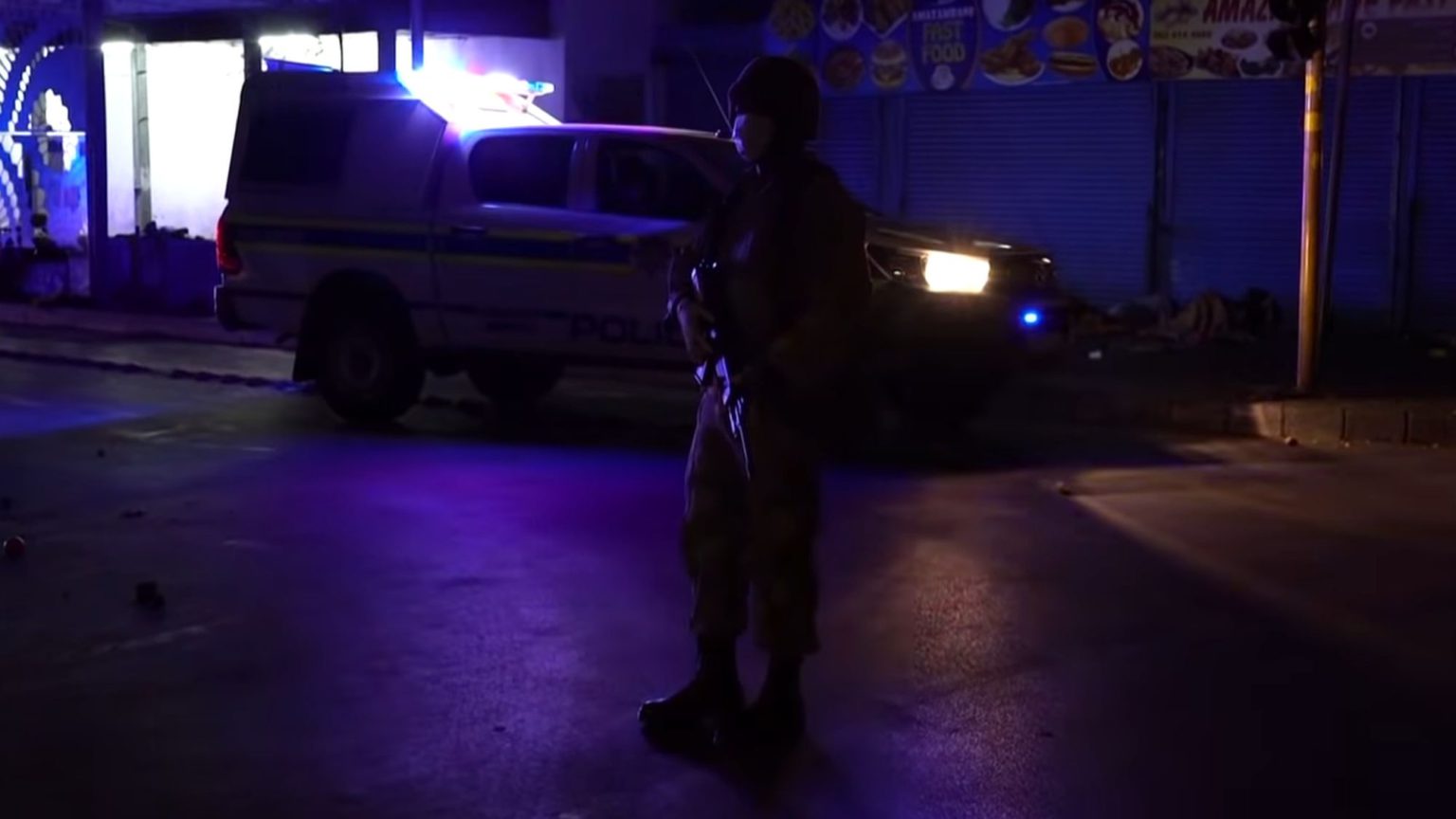 ‘We are still a constitutional democracy’, insisted South Africa’s defence minister, Nosiwe Mapisa-Nqakula, announcing a national lockdown on Monday 23 March in response to the global coronavirus pandemic. But this week, the sight of people in Hillbrow, in inner-city Johannesburg, being chased down by police and the army appeared to give lie to that statement.

A few days after the start of the national lockdown, President Cyril Ramaphosa appeared in full military regalia to address the South African National Defence Force (SANDF) to launch ‘Mission Save Lives’. ‘We must wage war against an invisible enemy – Covid-19’, he said. ‘You are expected to go out and defend our people against this virus and save lives.’

Of course, no army can fight an invisible enemy. Instead, the troops have been told that this enemy is carried by people who pass it on from one to another. The army’s real targets are the people who transgress the lockdown rules. Those rules include prohibitions on the sale, purchase and transport of alcohol, walking dogs and driving. Policing minister Bheki Cele made it clear how stringently these rules would be applied: ‘Two people have been charged with attempted murder who moved around after they have been told not to… If you break these rules you will spend six months in jail or be fined or both.’ Transgressors, he said, ‘are joining the enemy against the people of South Africa’.

On Monday, Ramaphosa announced that mobile-phone technology will be used to trace all citizens who had tested positive, or who had been in contact with an infected person, in order to monitor their movements and put them under quarantine. This followed an incident in the Alexandra township in which a male domestic worker had contracted the virus from his employer. He tested positive and was advised to self-isolate, but instead he travelled by public transport to the northern province of Limpopo to be with his family. In fact, on the day the national lockdown was announced, hundreds of workers left for their hometowns against the advice of the government. Since then, roadblocks have been set up on all major motorways to prevent people crossing from one province to another.

When Ramaphosa first announced the national lockdown, most of the media, politicians (including opposition politicians) and those living in the middle-class suburbs welcomed the move. They were reassured by Ramaphosa’s calm and measured delivery, and saw in him the leader they had been waiting for.

Prior to the Covid-19 crisis, Ramaphosa was seen as a weak leader of a divided ANC, who had been unable to halt the disastrous decline in South Africa’s economy. Unemployment is over 10million. There is practically no economic growth. Failing state-run businesses are propped up by never-ending government bailouts. Meanwhile, the national power company, Eskom, has been unable to provide a continuous supply of electricity. Ratings agency Moody’s recently downgraded South Africa’s government bonds to ‘junk’ status, such is the dire state of the economy under Ramaphosa’s leadership.

Leaders often use foreign wars or natural disasters to reassert their moral authority, especially when they are unpopular or weakened. Since the Covid-19 outbreak, Ramaphosa’s standing has improved particularly among the vocal, suburb-dwelling voters.

But now citizens in South Africa’s impoverished, overcrowded and under-serviced townships are becoming restless due to the strict rules imposed by the lockdown and the harsh treatment meted out by the police and the SANDF. The lockdown has revealed the gross inequality that has persisted in South Africa since the Apartheid era in a way that can no longer be ignored.

The measures are simply unsustainable in these townships. How is someone with coronavirus symptoms supposed to self-isolate when there are between seven and 10 people sharing one or two rooms? Often there is no water on-tap and a toilet has to be shared between 70 other residents in a block. How are people supposed to practice social distancing by keeping one or two metres away from others when they are living cheek by jowl?

The government has provoked further resistance by allowing only ‘spaza’ shops to remain open if they are owned by South African nationals. Spaza shops are small vending premises which usually operate from a room within a house. The majority are owned by foreign migrants who have rented the spaces from locals. But as these vendors are not allowed to operate, snaking queues are forming outside the small number of remaining shops. Social distancing again goes out of the window.

The new rules have also made life extremely difficult for essential workers to go to work and back. Communal taxis – minibuses which normally carry 15 or more people – were initially only allowed to carry seven passengers each. Operating hours were also restricted to two three-hour windows: between 5am and 8am, and between 5pm and 8pm. These taxis simply cannot afford to operate on such a basis, without a state subsidy. Drivers who have flouted these regulations have been arrested and their cars impounded. As a result, essential workers were being left stranded if their morning shifts finished after 8am. They had to wait around all day until the next shift started before they could get home and see to their families’ needs.

Four days into the lockdown, the government temporarily relaxed the operating hours for taxis and buses in order to allow social-security recipients to collect their grants at pay points outside their immediate local area. Six days later, the restrictions on the number of passengers were relaxed – in theory. Taxis could carry their full capacity provided that passengers wear masks, which are in short supply.

Once social-security claimants were given the go-ahead to take taxis, many arrived at the pay points (often housed in shopping centres) at 5am to join queues running several miles long. Queuers had nowhere to sit and social distancing was impossible. Many were forced to wait eight hours or more before they could get to a counter. Even after this agonising wait, some people had to be turned away when cash ran out and they were told to come back and queue up again the next day.

There are 17million people on social grants in South Africa – significantly more than the 10million people who are employed. Among these claimants are old and vulnerable people and some with disabilities – the very people who should be self-isolating. They have been forced to jostle with younger claimants and shoppers in the long queues. In the space of just two days, three pensioners have died while waiting in these queues.

The enforcement of the lockdown has been brutal and violent. Police in the Vosloorus township killed a man while on lockdown patrol. After dispersing a group of people at a nearby tavern, officers chased him home and shot him several times at close range. In Cape Town, a man was also killed by police. After catching him on a beer run, they beat him with a hammer and tasered him. A third death has also been confirmed. Police have started using water cannons to disperse larger crowds, including a crowd of 2,000 at a shop in Cape Town. Footage of the SANDF forcing transgressors to do frog jumps and roll in the mud have caused justifiable outrage.

Are such harsh measures warranted? And will a lockdown be viable for much longer? At the time of writing, South Africa has logged 1,462 cases of coronavirus and only five coronavirus-related deaths.

Professor Alex Broadbent of the University of Johannesburg thinks the lockdown approach to Covid-19 adopted by much of the world could be incredibly dangerous in the African context.

Broadbent argues that more people may die from starvation than from the virus. Unemployment was already 30 per cent in the fourth quarter of 2019. Even more will have lost jobs due to the lockdown as small businesses are forced to close and informal traders are unable to operate. He argues that South Africa has to make hard choices that reflect its particular circumstances. It cannot follow the paths taken by Europe, the US or China.

As Broadbent points out, Covid-19 has yet to claim the life of anyone under the age of 10 and has killed very few under 30. Coronavirus disproportionately affects the elderly. Europe has an ageing population. But in Africa, where only six per cent of the population is over 65, a protracted recession is a far greater threat. Malnutrition, on the other hand, disproportionately affects the young. The 2008 recession caused a billion more people to be malnourished than would have been otherwise. The economic pain of the coronavirus recession could be much worse, and it has hardly even begun to bite.

Furthermore, while Western governments are doing all they can to ‘flatten the curve’ to reduce pressure on healthcare systems, Broadbent argues that this logic does not apply in Africa where healthcare is inaccessible to the majority. Perhaps, given these statistics, he argues that we should accept the rising peak of coronavirus cases in order to avoid the far greater toll caused by a long lockdown.

Despite all the costs, President Ramaphosa prefers the Chinese model of drastic lockdown. In March, the South African government repatriated 114 students, teachers and workers from Wuhan. They were under lockdown in China for 51 days and were held for a further 14 days in quarantine on arrival in South Africa. Their experience was proof of the need for a Chinese-style containment strategy, wrote Ramaphosa in a letter to the nation.

But South Africa is not China. China has a centrally controlled government, which has the resources and capacity to bring in such drastic measures. The South African government, in contrast, whether through mismanagement, corruption or a lack of will, has utterly failed to shift the political landscape since the end of Apartheid.

What the South African state does have, however, is a worrying willingness to use violence against its own citizens. Extreme force has been used over the years to quell the masses – from the Marikana miners’ strike to the numerous nationwide service protests last year. Amid the lockdown, the authorities are gearing up to face off against a frightened but desperate populace. Which side will we be on?