The delights of his early fiction gave way to an increasingly inhuman idea of progress. 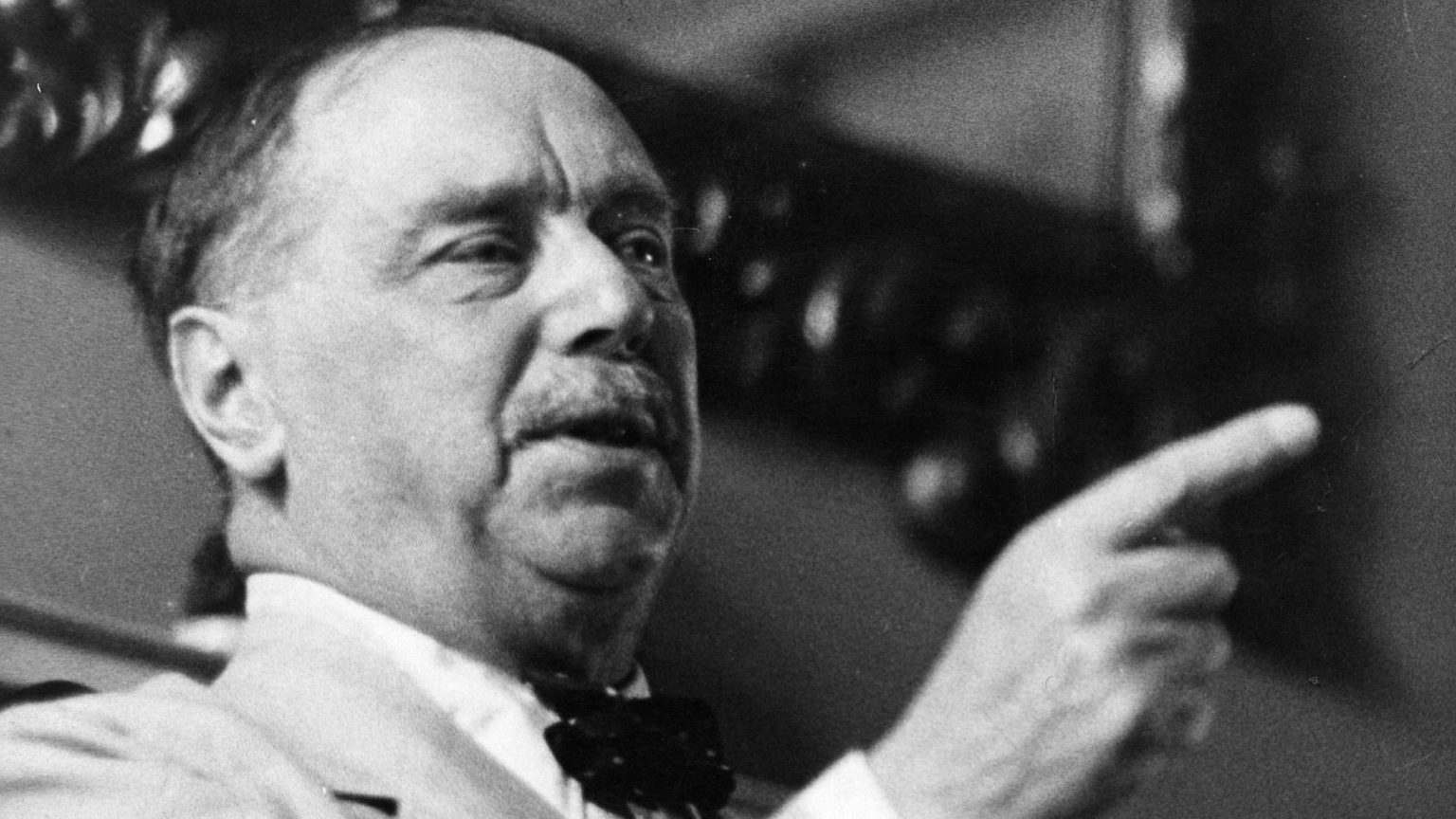 GK Chesterton’s most famous analogy is that of a walker finding an ancient fence in a landscape. Chesterton suggested that while one might not understand the fence’s purpose, one should still respect it, because it had at one time served a function and it might still perform that function. Tearing down the fence out of impatience or impetuosity was reckless, Chesterton suggested, because through simple ignorance one might be destroying a potentially useful construction. Such was the situation in which modern man found himself.

HG Wells (1866-1946) – the prolific fiction and non-fiction writer, best known for his early science fiction – never encountered a fence that he did not do his best to pull down. Family, marriage, religion, nationhood, custom and class – all were subject to Wells’ ire and mockery. He felt it his duty to remake the world according to science and rationality. The sight of old fences was a provocation to him.

Many today underestimate the enormous influence of Wells. Not so Sarah Cole, who seeks to retrieve something of Wells’ importance in Inventing Tomorrow: HG Wells and the Twentieth Century. As she points out, Wells’ work has sold millions of copies, and has been translated into multiple languages. His output was vast. He was a titanic figure in his day, whose comments were newsworthy and who could call on dictators and presidents at will.

Inventing Tomorrow is a sympathetic and informative exploration of Wells as a writer and thinker. Cole does not downplay those aspects of his work and character that make him unpalatable to us today. But her admiration for her subject shines through. With some justification, she sees him as one of the most important figures in 20th-century history.

The young Wells escaped the drudgery of working as a draper in rural Sussex by becoming a teacher and then winning a scholarship to study in London. There he came under the tutelage of TH Huxley, a leading proponent of evolutionary theory. Wells’ first novella, The Time Machine (1895), was about a man who travels to the future and discovers that mankind has divided into two different species: one incurious and weak (Eloi), and the other brutish and predatory (Morlock). Although this seems a paradigmatic example of Social Darwinism, Cole claims that Wells always rejected the approach. But, given his many statements advocating forms of social engineering, it remains difficult to distance Wells’ thought from Social Darwinism and eugenics theory.

The Time Machine combined action, mystery and social theory in what was then called scientific romance (later known as science fiction). His science-fiction novels, The Invisible Man (1897) and The War of the Worlds (1898), and his sequence of dazzling short stories, expanded this then embryonic genre, and captured the public imagination, first in Britain and then worldwide.

Wells was a scientific populariser (his first book was a biology textbook, published in 1893). In his writings, we find the first descriptions of future inventions: the electric door, atomic weaponry, television and the internet. He deprecated his craft, and admitted he would rather be considered a journalist than an artist – although many writers admired him as a stylist.

Wells’ preference for journalism over fiction writing reflects his long-standing tendency towards didacticism. It was a tendency that had always existed in him – one can see it even in his early novels. But it became more pronounced as time went on. Wells then turned to writing social comedies, critiquing the class and sex standards of the Edwardian age. Love and Mr Lewisham (1900), Kipps (1905) and Tono-Bungay (1909) all became popular and widely discussed novels – staples of the diet of every educated English-speaking reader.

As Wells’ stature grew, so did his ambition. Social and political issues started playing an ever more dominant role in his essay-novels, with characters becoming little more than ciphers for social viewpoints. As Cole writes: ‘Wells felt no compunction about turning over swaths of his fiction to the exposition of a problem or idea, where his peers were more likely to disperse such conversation in favour of partiality, suggestion and dramatisation.’ All of which sometimes left Wells’ characters flat and lacking in individuality.

After the First World War, Wells turned increasingly to essays, journalism, history writing and broadcasting, as radio technology became widespread. His works were quickly adapted for radio and cinema as the technology developed. As Wells’ imagination became increasingly speculative and broad, science fiction and social comedies seemed too constrictive. He started writing histories, which were read by millions worldwide, eschewing the dominant ‘great man’ approach of many contemporary historians. Instead, Wells saw individuals as ‘transitional actors, helping galvanize and articulate world forces and directions, eventually to be superseded’. In one respect, this was a broadening of the scope of history. In another, it indicated a worrying typical trait of utopians, which is to view individuals as mere fodder in the onward march of progress.

Wells’ work represents the apex of hyper-rationalism and scientism in modern thought. He saw atheism as automatic, the adoption of a universal language as necessary, and rule by a cadre of technocrat-scientists as inevitable. He threw his backing behind projects that were quintessentially progressive: opposition to monarchy and fascism, and support for the League of Nations, disarmament, women’s suffrage, sexual emancipation, birth control, atheism and race blending. (His infamous support for eugenics was supposedly short-lived.) Wells’ socialism exceeded mere internationalism; he campaigned for a one-world government. For Wells, the partial imperialism of nations was iniquitous, yet the global imperialism of socialism was virtuous.

Wells was a vociferous and very public atheist. He also advocated free love, although one suspects that was a post facto justification for his compulsive philandering. Still, Wells saw no inner conflict between high-minded idealism and cynical libertinage.

Had Wells remained an author of only science fiction and social comedy, he would likely be read more today. But his didactic writing and public activities diluted his standing as a writer. And his later fiction was generally less satisfying than his earlier efforts.

Still, he was at his best when he was presenting the moral ambiguity of scientific advance, without offering any easy resolutions. The best example of this is The Invisible Man, in which the protagonist is as much disabled as empowered by his newfound invisibility. The ramifications of a wondrous scientific advance become a terrible burden. We are transported by wonder, horror and pity in the story.

The inhuman tyranny of utopia

Cole’s lengthy introduction displays a certain cognitive dissonance. This arises from her assumption that there is a contradiction between Wells’ progressivism and his lack of compassion, evident in his support, for instance, for eugenics. Yet there is no contradiction. Wells’ cavalier attitude towards individual lives was indicative of his conviction that man and society are malleable and perfectible. This vision leads to inhumanity, because it dismisses the limitations of human nature and sees individuals’ dissent as an impediment simply to be overcome. ‘The Wellsian injunction is always this’, writes Cole: ‘when you see the world around you with all of its ugliness, inequity, and complacency, try to imagine a better one. Imagine it, and make it.’

Cole does not see the other side of Wells’ ambition, which is hubris. His utopianism leads him to dismiss all that humanity has built, from its smallest communities to its nations. ‘Nations’, Cole writes, ‘are the source of untold evil in the modern world; this became and remained his mantra. A cosmopolitan to the core, Wells wanted to eradicate nations, replacing patriotism with loyalty to the whole human race.’ It is a vaunting, potentially totalitarian vision. Wells’ desire for a pacified unified polity, in order to avoid fratricidal genocide, would have required subjugation of the entire human race in an absolutist system. It would have erased cultures, languages, traditions, nationalities, the principle of democracy and the possibility of personal or group dissent. It would have required a pervasive monitoring and correction of all citizens under a technologically unassailable elite class. Wells admitted as much.

He assumed that the universality of mankind logically led to a single global authority, which would obviate the danger of war. This liberation could only come about by circumventing fickle democracy and destroying loyalty to tradition, which required argument, propaganda and – inevitably, when these failed – force. Like all utopians, Wells had a zealous fervour to see a rationalist paradise enacted on Earth. He who loves mankind in the abstract, but not in actuality, can rationalise tyranny as long as he does not get his own hands bloody.

Inventing Tomorrow: H.G. Wells and the Twentieth Century, by Sarah Cole, is published by Columbia University Press. (Order this book from Amazon(UK)).