The earthquake in east Germany

The cordon sanitaire against the AfD has been breached for the first time. 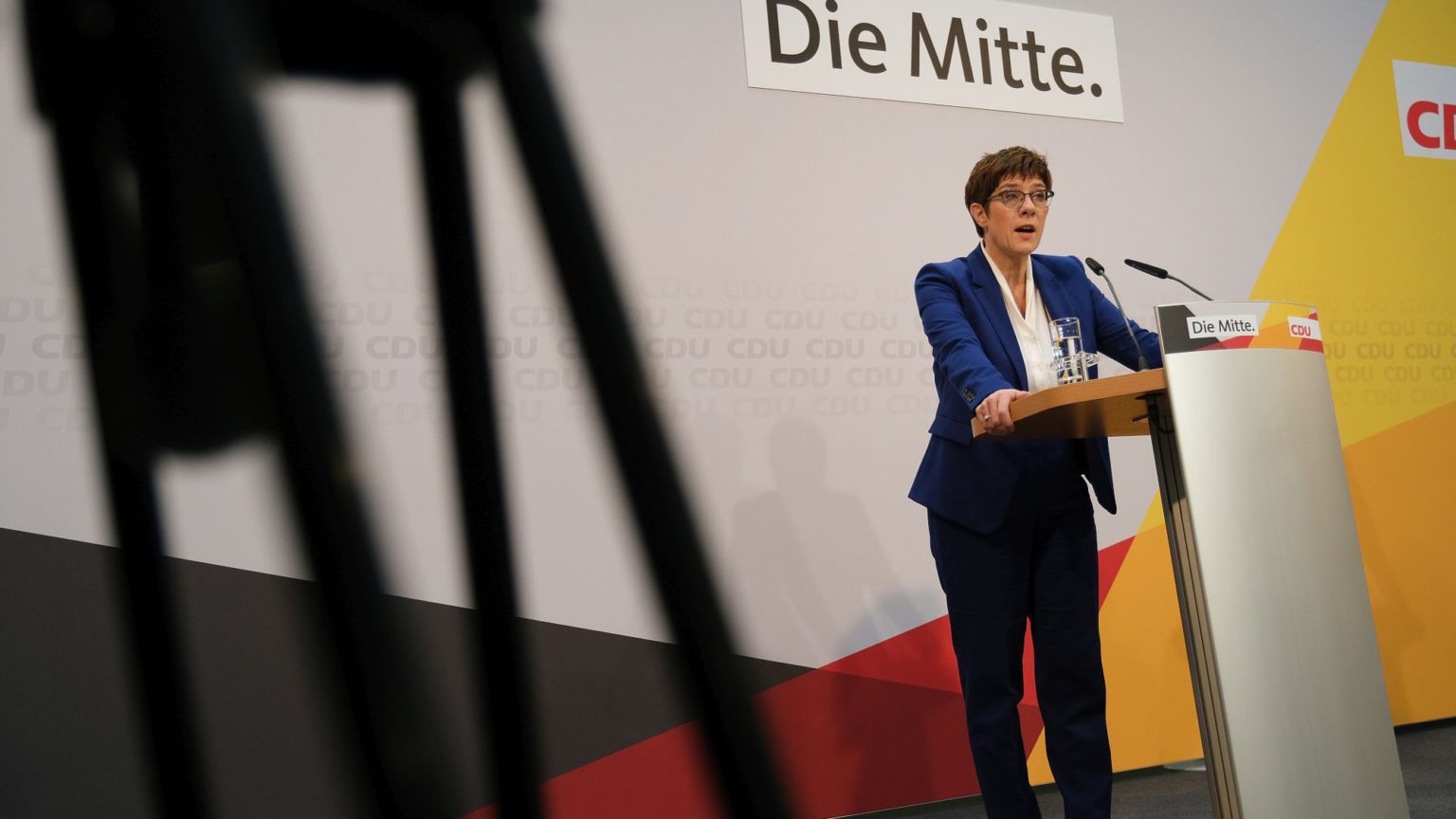 Events in Thuringia last week have had political consequences that reach far beyond the borders of this small state in eastern Germany. Five days after the surprise election of Thomas Kemmerich as the state’s new premier, the party leader of the ruling CDU, Annegret Kramp-Karrenbauer (or AKK, as she is often called), has announced her resignation.

The problems began with last autumn’s state elections. Last week, it looked as if a state government could finally be formed. Kemmerich was chosen as premier despite his party, the centrist Free Democratic Party (FDP), winning just five per cent of the vote. He was elected with the support of local centre-right CDU politicians, alongside the controversial right-wing populist party, the AfD (Alternative for Germany), which pulled its own candidate for premier to throw its weight behind Kemmerich. It was the CDU politicians’ decision to join ranks with the AfD which has provoked a political earthquake powerful enough to reach the top of the party.

‘Unforgivable’ was how chancellor Angela Merkel described her party working with the AfD. The CDU leadership demanded a reversal of the vote which appointed Kemmerich.

All of the mainstream parties had, until now, maintained a cordon sanitaire against the AfD. But last week, a ‘crack in the establishment’s defences against the far-right’ had formed, in the words of Bloomberg’s Germany correspondent.

Before AKK’s shock resignation, other heads had rolled, too. First to resign was Kemmerich himself – only hours after his appointment. He was under pressure to do so from the CDU and his own party. The CDU’s minister for east Germany, Christian Hirte, was forced to stand down because he had congratulated Kemmerich for his election on Twitter.

The affair in Thuringia shows the difficulty the German establishment is having in dealing not only with the AfD but also with voters more broadly. Kemmerich’s contested election was, in many ways, the consequence of the establishment parties’ failures. The old established parties, particularly the Social Democrats (SPD), suffered massive losses in the state elections.

In Thuringia, neither the incumbent coalition government – made up of the Left Party (Die Linke), the SPD, and Greens – nor any other grouping was able to form a stable government. The CDU, which also lost votes, was faced with the choice of either tolerating the Left Party’s Bodo Ramelow or supporting Kemmerich alongside the AfD.

In her resignation speech, AKK said that as a person from the middle, she rejected both options. As party leader, AKK placed pressure on her colleagues from Thuringia to uphold the unwritten rule of ‘no collaboration’ with the AfD. But they did not listen to her. The current crisis in the CDU shows that that situation has become untenable.

The AfD came second in the Thuringia state elections, winning over 23 per cent of the vote. Local CDU politicians feel under much greater pressure from their voters than the party bigwigs in Berlin. They knew that supporting a candidate from the Left Party, whom their supporters rejected, would have cost them dearly.

Angela Merkel initially called for the reinstatement of the Left Party’s Ramelow as caretaker premier. The CDU general secretary, however, opposed to his party working with the left, has instead called for a ‘cross-party solution’. He has proposed that a non-partisan, technocratic leader could take over the state. This proposal shows how dangerous the anti-AfD taboo has become. To maintain its anti-AfD policy, the CDU leadership is even willing to abandon the basic principle of democracy: that governments must be elected and accountable to the voters.

It is true that Thuringia’s AfD is led by one of the party’s most obnoxious characters. Björn Höcke is a former history teacher from western Germany, known for his ugly historical revisionism which romanticises the far right. But calls for an unelected government, simply to shut out his party, are far more dangerous.

The calls for a technocratic government, not to mention the AfD taboo itself, reveal a worrying unwillingness to engage in serious and open debate. Formally, the main parties’ anti-AfD stance is presented as a defence against a right-wing party. But informally, it is also directed against its voters. Trying everything to outmanoeuvre and exclude the AfD has proven to be a futile strategy. More and more people are starting to think the mainstream parties are not even interested in courting their vote.

The AfD’s political tactics should not be defended, either. The party’s attempt to have a politician like Kemmerich appointed – whose party came last in the autumn state elections, and who represents only around five per cent of the voters – is just as contemptuous of democracy as the CDU’s idea of appointing a technocratic leader. The proper thing in a democracy would be for the party which won the largest number of votes to provide the premier. In this case, it should have fallen to the Left Party, which won 31 per cent of the vote, to form a government.

Sadly, far too few people in German public life – from those who hate the AfD to AfD supporters – are consistent when it comes to democracy. Instead of defending fundamental principles, such as the right of representation and majority rule, parties have instead been engaged in a tactical scuffle. Those who are upset about the events in Thuringia should ask themselves this: are they really worried about democracy, or do they simply want to isolate a party they disagree with?

For some commentators, the events in Thuringia have become symptomatic of the chaos democracy can produce. That is not true. The chaos was produced by the fact that so many politicians are unwilling to accept democratic results they do not like.