A new start for Northern Ireland?

Stormont is back up and running. But the crises will continue. 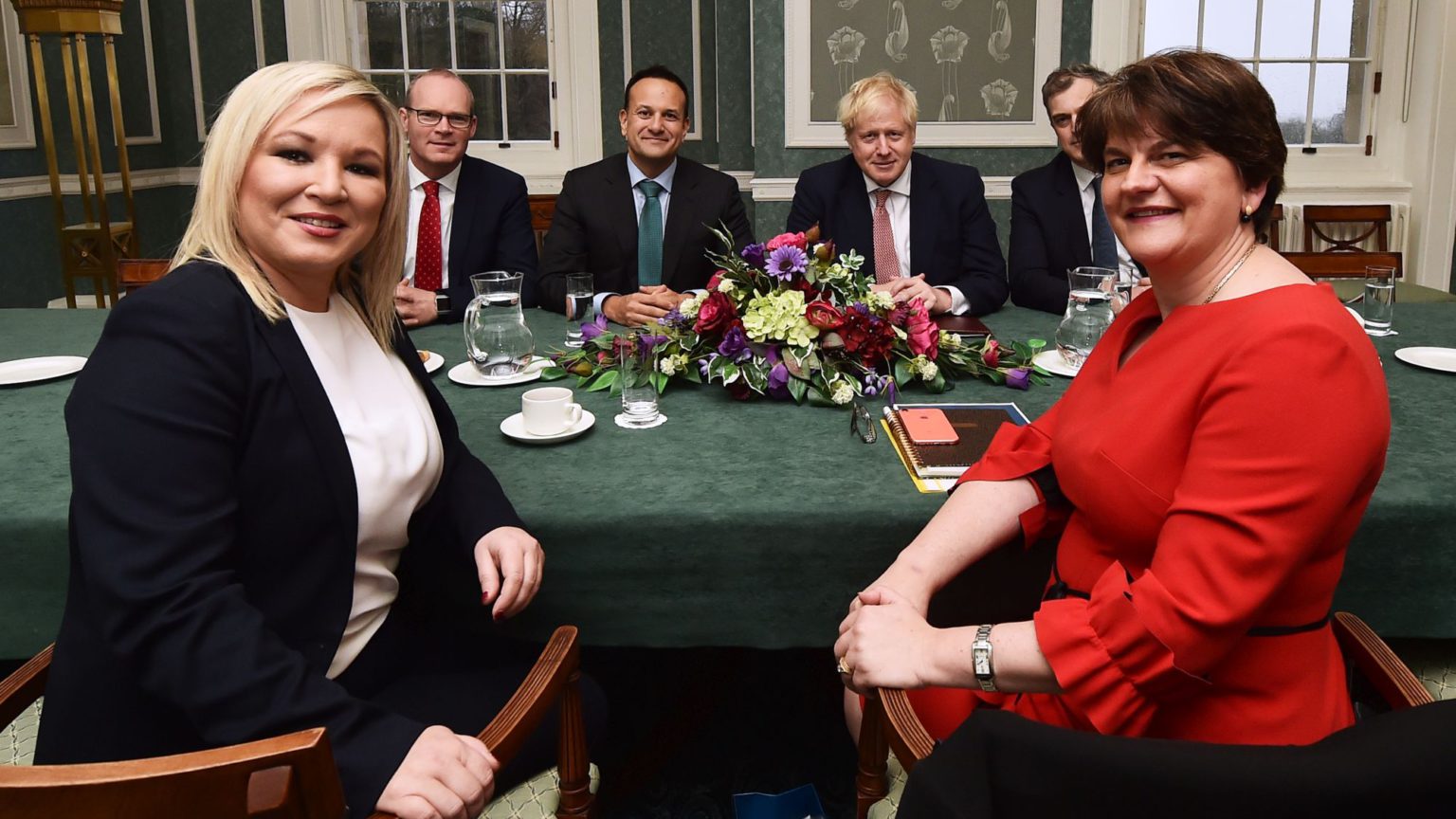 After three years without a functioning government, power-sharing is up and running again in Northern Ireland. Underneath the well-rehearsed performances of reconciliation and getting back to business, the manner of the Democratic Unionist Party (DUP) and Sinn Féin capitulation to Britain and Ireland’s lacklustre deal, ‘New Decade, New Approach’, suggests that the old political forces of Unionism and nationalism are running out of steam.

Last week’s decision by the British and Irish governments to publish their ‘take it or leave it’ deal finally pulled down the curtain on a three-year stand-off between Sinn Féin and the DUP, which had brought devolved government and the administration of public services in Northern Ireland to a virtual standstill. This new deal is the latest in a very long line of deals aimed at enticing the more unyielding elements of the Unionist and nationalist parties to stay inside the power-sharing fold. It is a typical example of post-Good Friday Agreement crisis-management. On top of an eye-catching financial package, aimed at rebuilding Northern Ireland’s failing public services, the deal includes a new Statutory Office of Identity and Cultural Expression, plus two new cultural commissioners, one dedicated to promoting the Irish language, the other to nurturing ‘Ulster Scots / Ulster British traditions’.

So far, so familiar. Making funds available for social-development initiatives, while funnelling cash into pet cultural projects, has become a tried and tested formula for building consensus between local parties. This is the tit-for-tat of ethno-cultural power politics. The previous power-sharing crisis, which ended with the 2015 ‘A Fresh Start’ agreement, delivered a similar trade-off, involving a £585million financial package – courtesy of the UK Treasury – aimed at mitigating the impact of austerity cuts, as well as additional money for establishing a new Commission on Flags, Identity, Culture and Tradition.

The choreography of the latest deal was familiar. Within hours of signing up, the DUP’s Arlene Foster had settled back into her role as first minister, with Sinn Féin’s Michelle O’Neill slipping into character as deputy first minister, firmly committed ‘to power-sharing with Unionism in the Stormont Assembly’. Having previously railed against the unaccountable power-sharing structures of the executive, the Social Democratic and Labour Party (SDLP) put aside former dreams of building an official opposition to join the Alliance Party and Ulster Unionist Party (UUP) in their supporting roles as ministers in the new government.

The tone of the proceedings was conciliatory and business-like. Foster, whose cack-handed management of the ‘renewable heat incentive’ controversy and open hostility towards the Irish Language Act had done much to precipitate the crisis, waxed lyrical about the need to find common ground so as to get Northern Ireland ‘moving forward again’.

Beyond the usual platitudes, all the parties emphasised the need to prioritise public spending, a reflection of the level of anger among voters about poor public services following decades of neglect, political mismanagement and broken promises. The prospect of substantial funding to settle ongoing pay disputes among health workers and teachers, increase police numbers and tackle hospital waiting lists — the highest in the UK — were key factors in bringing the DUP and Sinn Féin back into the power-sharing fold. Agreeing a deal was the only way the parties could avoid facing a hostile electorate in an Assembly election, which might further weaken or even break their stranglehold on government.

Arriving for the now traditional photo-call at Stormont, British prime minister Boris Johnson and Irish Taoiseach Leo Varadkar praised ‘the wonderful compromise’ delivered by local politicians, rejoiced in the restoration of the Good Friday Agreement, and looked forward to the deepening of ‘north-south and east-west cooperation’. Under pressure for his own government’s handling of healthcare and with a General Election looming in Ireland, Leo Varadkar needed to get the deal done. Significantly, however, Boris Johnson would not be drawn on the exact amount of cash the Treasury was willing to stump up to seal the deal, making the point that it was ‘not just about money’. While observing the niceties of Britain’s role as honest broker, Johnson’s tone spoke to the altered political fortunes of the Northern Ireland parties alongside new political priorities at home.

Last month’s General Election results confirmed the weakening of old ‘ethno-cultural’ political formations and the turn towards a new focus on economic, social-justice and class issues in Northern Ireland. As Unionism continues its decline as a political force, it can only maintain its dominant position for as long as the Union remains intact. Britain’s decision to break the impasse on the Irish backstop by drawing the new EU customs border around the island of Ireland represents a humiliating defeat for a political project whose sole raison d’être lies in the defence of the ‘precious Union’. While Sinn Féin has been more successful than its Unionist rivals in linking the nationalist equality agenda to contemporary concerns about marriage equality, social justice and respect for minority rights, it remains confined, in the north, to pressing for further concessions for its community within the framework of the Good Friday Agreement. In the event, the British government’s decision to pass legislation in Westminster to decriminalise abortion and allow same-sex marriage in Northern Ireland has stolen much of its thunder.

Meanwhile, the Tory landslide has dealt Boris Johnson a stronger hand in the negotiations that will end with Britain’s formal exit from the EU. Whatever the final trade deal looks like, and however hard Johnson sticks to his line on maintaining frictionless trade, Northern Ireland is staying behind as part of the EU’s Single Market. Johnson is right to say that politics is not just about money. But with public spending in Northern Ireland already 21 per cent higher than average per capita spend across the UK, and with the redevelopment of England’s left-behind towns at the top of the new Conservative government’s political agenda, the deal-making that currently sustains the crisis-ridden coalition between Unionists and nationalists in Northern Ireland may prove an expense too far.

All future settlements between the people of Britain, Northern Ireland and Ireland will have to be negotiated within these changed economic and political realities. It may look and sound like the same old story, but ‘New Decade, New Approach’ might herald significant changes to the dynamics of the transactional relationship between London, Dublin and Belfast.