After Seattle: how the left lost its way

The anti-globalisation movement of 1999 paved the way for today’s conspiracist left. 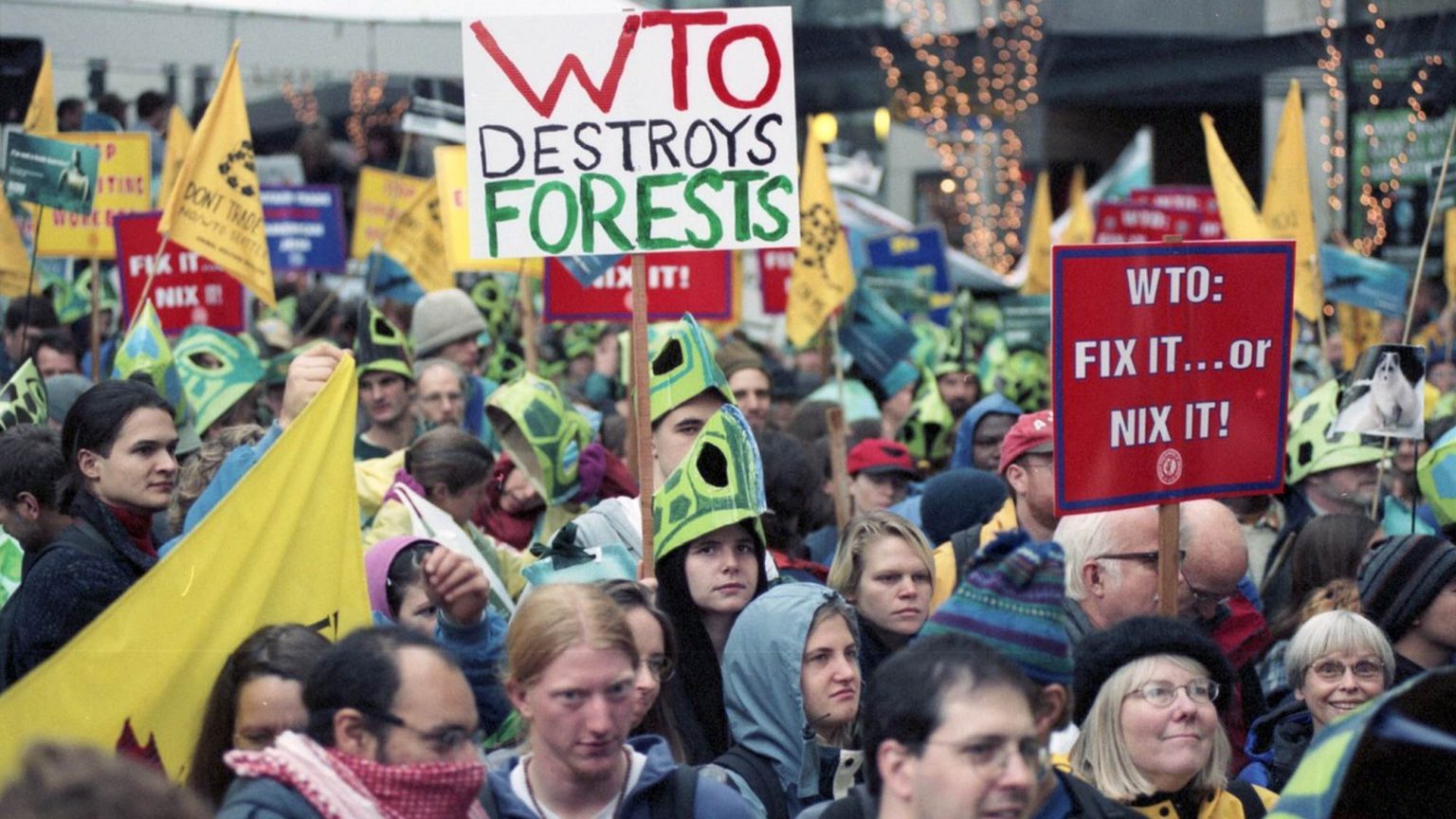 Twenty years ago this week, 40,000 protesters gathered in downtown Seattle and attempted to shut down a ministerial meeting of the then fledgling World Trade Organisation.

Some were worried about cuts to public education. Others, dressed as turtles, were concerned about marine welfare. A few were self-styled anarchists looking for a Starbucks to smash up. But regardless of their special interests, all seemed to coalesce around the belief that huge, multinational corporations, in cahoots with increasingly hands-off governments, were the key problem.

These masters of the post-Cold War universe were seeking to rig the world’s economy for their own personal gain. And they were doing so through what amounted to their ‘own global charter of rights and freedoms: the Multinational Agreement on Investment’, as one of the era’s key figures, Kalle Lasn, put it in Culture Jam (1999). This was supported, the protesters argued, by a raft of global institutions, from the International Monetary Fund to the World Trade Organisation, all of which allowed the all-powerful corporations to sell and move their businesses and other assets wherever they sniffed profit.

The protests began on 30 November and lasted for several days. The police attacked with tear gas and rubber bullets, and the protesters had their violently suppressed cause broadcast into millions of homes. A protesting template was born. For a few years, almost every G7 or WTO meet-up was accompanied by similar scenes.

Some presented these anti-something-or-other protests as the birth, or revival, of a left-wing critique of capitalism – a welcome reinvigoration of the political amid the dull Third Way consensus of the Clinton and Blair years.

But that was wishful thinking. These protests represented less the revival than the further degradation of the postwar left. They continued its movement away from an economic critique of capitalism, a retreat that had began during the New Left years, and towards a critique of consumption and culture, writ large in the titles of Naomi Klein’s No Logo and Lasn’s Culture Jam. And underwriting this movement away from political economy was the left’s slow-motion abandonment and denigration of the working class itself.

Sure, in that early flowering of the anti-globalisation movement, there was talk of workers’ suffering, particularly of those in the far-away sweatshops of India or China. But the working classes never really featured as participants. They were referenced, cited and often pitied. But they were not seen as active – except, perhaps, in the fantasy form of theorists Antonio Negri and Michael Hardt’s ‘multitude’.

It might seem counterintuitive to suggest that the anti-globalisation moment took the left further away from an economic critique. After all, the likes of Kasn and Klein, and, in a UK context, Noreena Hertz, peppered their work with economic tropes. They talked of finance and trade, of tariffs and deregulation. But what emerges when surveying their output as a whole is nothing like an analysis of global capitalism as a mode of production, constituted by relations and forces of production. Rather, we are presented with global capitalism as a conspiracy.

For instance, in Fences and Windows: Dispatches from the Front Line (2002), Klein writes that every local problem, from food security in Europe to the rise of HIV in Africa, is the effect of ‘a global ideology, one enforced by national politicians but conceived of centrally by a handful of corporate interests and international institutions’. Global capitalism is not a system here, so much as a plot.

Klein is far from alone. She is merely the most eloquent representative of the moralism and conspiracism that permeated the anti-globalisation movement, and reduced political and economic events and processes to the handiwork of a few greedy corporate and political entities.

Moreover, this degraded way of thinking out-lasted the protests themselves. It is perhaps the anti-globalisation movement’s greatest and most dispiriting legacy. Indeed, you can see the shallow conspiracism developing and entrenching itself with each leftist response to political and economic events: in the nonsensical contention throughout the 2000s that the financially crippling Iraq War was a plot on the part of political and corporate interests to seize Iraq’s oil fields; and in the response to the financial crisis of 2008, which began with banker-bashing and culminated in the radical-sounding bromides of Occupy in 2011. The bad guys of anti-globalisation – the corporates, the WTO, the disaster capitalists – had merely been updated and grouped under the banner of ‘the 1%’, a fraction driven by ‘greed’ and dedicated to the ‘corporate takeover of the political system’, as Occupier Sarah Ruth van Gelder put it.

Unsurprisingly this degenerate worldview provides an ideal breeding ground for anti-Semitism. All the old elements are there. The blame-gaming focus on financiers, shadowy cabals and sects. And these elements are often in play alongside that other great cause of Western leftists — namely, attacking Israel. Anti-Semitism does not inevitably grow in these uplands of the anti-globalisation movement. But it is always going to find fertile ground there. Hence in 2004, Lasn, Adbusters founder and instigator of Occupy, thought nothing of publishing a list of neoconservatives intent on advancing the US as a ‘hyper-power’ around the world, complete with an asterisk next to their names if they were Jewish.

It might seem a leap, but all of this sheds some light on the anti-Semitism-flecked thinking that dominates Jeremy Corbyn’s Labour Party. Not that Corbyn, shadow chancellor John McDonnell, or even the slightly younger public-school Stalinists advising them had anything to do with the Battle of Seattle or Occupy. They are from different traditions, be it Bennite or Communist. But among the Tweeting Corbynistas, and the over-graduated, under-employed rank and file of Momentum, there are many who did cut their teeth on anti-globalisation and Occupy. Many who do genuinely think there is a 1% plotting and conspiring against the 99%. Many Toytown revolutionaries who will slide into anti-Semitic tropes and thinking.

That’s why you can see in what is called Corbynism all the moralism, conspiracism and shallow anti-capitalism of the anti-globalisation worldview. As one critic notes, Corbyn now talks of those who have ‘stitched up’ the political and economic system, to ‘line the pockets of their friends’. Labour frontbenchers repeat mantra-like the assertion that a super-rich 1% have ‘rigged the system’. Even Labour’s manifesto talks darkly and dangerously of ‘the vested interests holding people back’, and of ‘a wealth grab by a privileged few… at the expense of the majority’, before pointing the finger of blame at the ‘big polluters, financial speculators and corporate tax-dodgers’. If this is socialism, as the Corbynistas claim, it is the socialism of fools.

Twenty years on from the Battle of Seattle, many commentaries treat it as a closed episode. But it’s not closed. The moralising and conspiracism which flourished on the left on the eve of the 21st century, before developing and consolidating itself after Occupy, is now animating the corpse of the Labour Party. It makes for an ugly sight.