The forgotten story of Remembrance Day

In the wake of the Great War, official ‘remembrance’ was used to quell the masses. 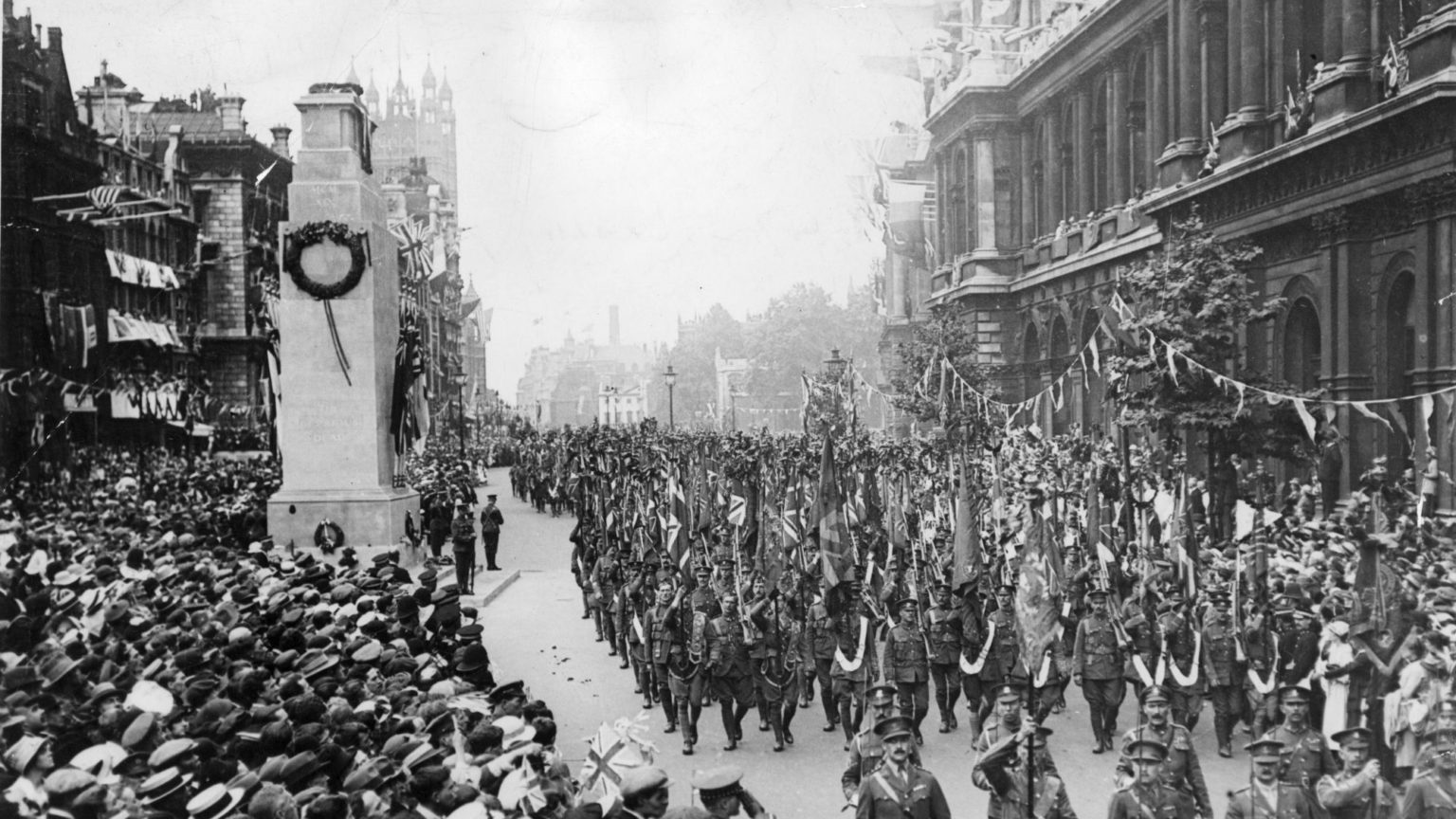 On 11 November 1918, the day of the Armistice marking the end of the First World War, most people were just glad it was over. ‘There was no sense of victory, much less any hatred of the enemy’, recalled Captain Alan Thomas of the Sixth Battalion, ‘only a strong desire to get home’.

In London and other English towns, the crowds celebrated through the night. But diaries and letters of the time show that many who had lost loved ones were privately grieving while the world cheered. Richard van Emden conducted interviews and researched the private letters and diaries of bereaved wives and family members for his book, The Quick and the Dead. Doris Davies from Paddington remembered that her mother, Daisy, had borne the death of her husband Charles stoically. An eight-year-old Doris was surprised to find her mother weeping over the washing on Armistice Day. ‘Well, I have no one to come home and love me’, Daisy explained.

The celebrations did not last. Many soldiers were angry that they could not go home straight away. Marooned in demobilisation camps, waiting for trains and ferries, the men rioted. On 3 January 1919, British soldiers who were in Britain on Christmas leave were ordered to return to the continent. When they gathered at Dover and Folkestone, 9,000 of them refused to get on the boats. On 4 and 5 March, Canadian soldiers in the Kinmel Camp in Wales staged a mutiny. Three of the rioters and two sentries were killed, and 21 people were injured as the riot was put down.

All told, around 50,000 soldiers took part in protests demanding repatriation. Also, as the No-Conscription Fellowship pointed out in 1918, ‘1,600 Conscientious Objectors are still in prison’ – many of them for their second year. With one eye on the mutinies of German, Russian and French servicemen, the authorities in Britain were fearful. Sir Basil Thomson of the Metropolitan Police’s Special Branch said that ‘during the first three months of 1919, unrest touched its high watermark… I do not think at any time in history since the Bristol Riots we have been so near to revolution’.

Official ceremonies and parades, and the building of monuments, played an important part in restoring order. The Cenotaph, Edwij Lutyens’s monument to the war dead, was first unveiled not on ‘Remembrance Day’ – the anniversary of the Armistice in November – but during a Victory Parade in July called ‘Joy Day’. At the procession, ‘Butcher’ Haig – nicknamed after the two million British casualties suffered under his command – saluted the bust of Lord Kitchener. A Manchester Guardian reporter wrote that ‘The hosts of the dead were commemorated in the simple classical Cenotaph, tall and narrow and white’. The Cenotaph of July 1919 was a temporary structure, made of plaster and wood, like a Hollywood set piece. It ‘had risen in a day out of Whitehall’.

On the same day, a different assembly was held in Merthyr Tydfil, where 25,000 gathered not just to remember the dead, but also to demand higher pensions for ex-servicemen and their dependents. In Luton, ex-servicemen were told they could not hold their own commemoration, so they set fire to the town hall. When the firemen turned up, the soldiers held them back until the building was gutted. Luton was put under martial law for several days. In Chertsey, servicemen boycotted the Victory Parade, protesting over pensions, as well as the deployment of British troops to Russia to attack the fledgling Soviet Union.

James Cox, president of the International Union of Ex-Service Men, said at the time: ‘The whole thing is a mockery, and it is sheer hypocrisy to ask the discharged men to take part in what is officially termed “Joy Day”, while the widows and dependents of his fallen comrades are housed in hovels and exist in a state of semi-starvation.’

There were also some doubts about the Cenotaph among traditionalists. The Church Times saw ‘a cult’ of ‘Cenotapholotry’ and the Catholic Herald thought it was ‘Pagan’. Lord Alfred Mond, first commissioner of works and public buildings, thought the Cenotaph was maudlin and defeatist. He wanted it taken down after the Victory Parade. But the government needed to keep its grip on the way that the dead were remembered to make sure that members of the public were not recruited to more radical causes, like proper pensions for ex-servicemen – or worse, against the intervention in Russia.

The Cenotaph was kept up for the first anniversary of the Armistice – the first Remembrance Day – on 11 November 1919. The crowds were large. French premier George Clemenceau joined David Lloyd George at the ceremony. Across the country, reported the Daily Mail, people stopped in silence: ‘Mill girls cried when the looms were stopped.’ Even court proceedings came to a halt. In the Nottingham Assizes Court, ex-soldier Frederick Carter stood for a two-minute silence after the King’s letter announcing Remembrance Day was read out. Right after that, Carter was sentenced to death for killing his landlady.

Once again there were protests. The night before Remembrance Day, the British War Graves Association held a mass rally calling for the repatriation of bodies. In Manchester, a representative of the Ex-Servicemen’s Association was refused permission to address the procession on ‘the case for the living, in honour of the dead’. Ex-Servicemen’s leader, James Cox, wrote that it would have been better to reflect ‘on how the widows and dependents of the fallen are being treated, and to what treatment the maimed and disabled men are being subjected to since their return to civil life’.

By this stage, Lutyens’s wood and plaster structure was looking tatty, and the Ministry of Works announced that it would come down in January 1920. The Daily Mail and other newspapers then started a campaign for a permanent Cenotaph. This was unveiled by King George V in November 1920: ‘The Cenotaph, its new Portland stone a pale lemon, rose before us naked and beautiful’, the Manchester Guardian trilled.

The word ‘Cenotaph’ means an empty coffin or tomb. Sir Edwin’s design for the Cenotaph at Whitehall is clearly a coffin or sarcophagus, set high on a great pedestal that soars above the crowds. It has no explicit religious symbols on it (which irritated the churches). The inscriptions read, ‘the Glorious Dead’ and ‘1914-1918’. The meaning of Lutyens’s Cenotaph is that the empty coffin stands in for the war dead, who were left on the battlefield. It is a substitute for personal grief, redirected into a public ceremony. This was how the abandonment of the dead in Flanders and northern France was to be justified – with a token tomb in place of a real one.