The banality of Labour anti-Semitism

Corbyn has helped bring Jew-hatred back into the political mainstream. 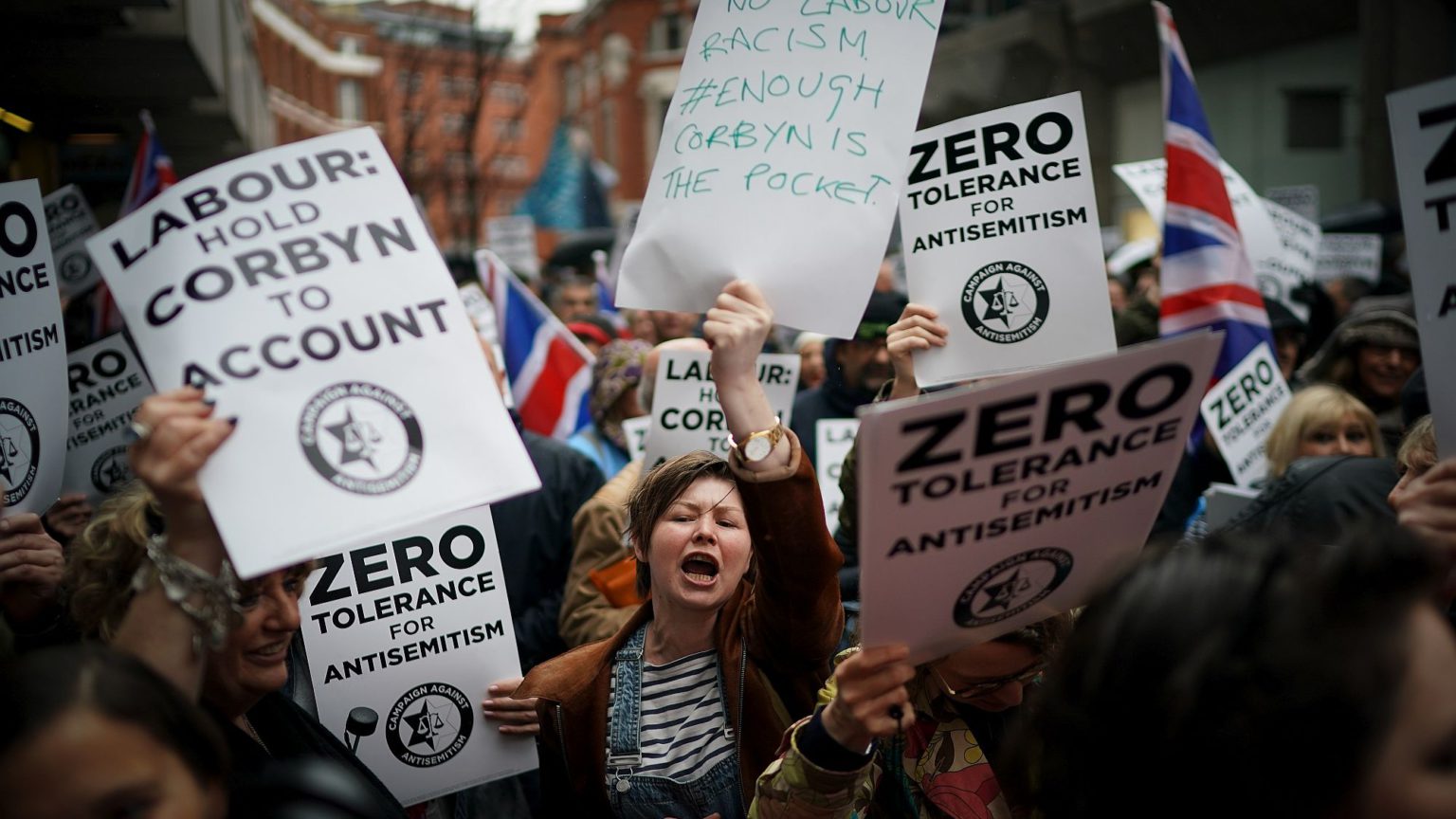 In normal circumstances, General Elections are fought on matters of policy and ideology. These, however, are far from normal circumstances. This General Election presents us with a moral as well as a political test. Brexit may feel like the central issue before us. But historians of the future may also judge this to be the year that anti-Semitism returned to the British political mainstream.

Labour leader Jeremy Corbyn is either himself anti-Semitic or so blind to anti-Semitism that he has allowed it to flourish in the party on his watch. Either way, Labour’s problem with Jew hatred is now beyond dispute. Labour has legitimised explicitly anti-Semitic Islamist groups, it has tolerated anti-Semitic behaviour within its ranks, and Corbyn himself has been happy to ramble on about ‘British Zionists’ having ‘no sense of English irony’. This has led Labour to the ignominy of a probe into its anti-Semitism, led by the Equalities and Human Rights Commission.

Until recently, Islamist groups and other propagators of anti-Semitism were on the fringes of public life. But they have been boosted by Corbyn’s Labour – a party that is now within touching distance of power. For those in the wider Labour Party who don’t harbour anti-Semitic sentiments, the General Election poses a significant moral question: is the mainstreaming of anti-Semitism a price worth paying for gaining political power?

For Labour MPs and activists, unfortunately, it seems it is. As former Tory special adviser Nick Timothy has argued, Labour MPs who claim to be anti-racist, while simultaneously campaigning to make Corbyn prime minister, are engaged in rank hypocrisy. Right-minded people watch with increasing disbelief as Labour campaigns to install as prime minister a man who has appeared on an Iranian state-funded TV station and spread conspiracy theories about Israel.

Even Tony Blair, who has long criticised Corbyn and his Momentum support base, has stated he will still vote for Labour. This is despite the fact that, as he acknowledges, anti-Semitism is ‘absolutely killing Labour’. One wonders just how much anti-Semitism Blair would be willing to tolerate before withdrawing his support for Corbyn.

What is clear is that, beyond some notable exceptions, such as former MP John Mann, the Labour tribe has made its choice: anti-Semitism is a price worth paying for power.

In Eichmann in Jerusalem (1963), Hannah Arendt asked the painful question of how the Holocaust was even allowed to happen. Were the majority of Germans, and perhaps Europeans, so virulently anti-Semitic that they actually endorsed it?

She concluded that, no, most people were not anti-Semitic. Rather, they were blinded to immorality by its normalisation. So, while they may not actively have endorsed the Holocaust, they passively endorsed it through their inaction. This is what she described as the ‘banality of evil’.

Similarly, the Parliamentary Labour Party, which is unwilling to challenge Corbyn and his cronies, is in effect endorsing the anti-Semitism in Labour’s midst. Labour’s anti-Semitism has become banal. MPs and activists have put aside moral concerns in order to achieve political goals. In so doing they are allowing for the normalisation of anti-Semitic ideas.

They will be forever tarnished by this, politically and personally. And with Labour lost, the moral challenge falls to others.

To her credit, Liberal Democrat leader Jo Swinson yesterday ‘categorically’ ruled out putting Jeremy Corbyn into No10 via a coalition or other agreement. Let’s hope she honours this pledge, if and when it is tested. And let’s hope others follow suit.

If we wake up to a hung parliament on 13 December, the question of whether to work with Corbyn will be forced on to the Lib Dems again, along with other potential coalition partners like the Scottish National Party. The temptation to form a government with Labour that could offer what each prospective partner wants, from a second EU referendum to a Scottish independence referendum, would be great. But decent politicians should reject this temptation.

SNP leader Nicola Sturgeon has indicated that she could support a Corbyn government. We can only hope that the millions of people around the country who are appalled by what they see happening on the far left hold the SNP accountable for this potential moral failure.

These will be an anxious five weeks for Britain’s Jewish community. It is in the power of leaders of all political stripes to alleviate this anxiety by condemning anti-Semitism and refusing to work with those who perpetuate it. This is no longer just Labour’s problem. Until we can categorically say that Jeremy Corbyn will never be prime minister, it is all of our problem.

Liam Thompson is a writer.