The departing speaker was no warrior for democracy. 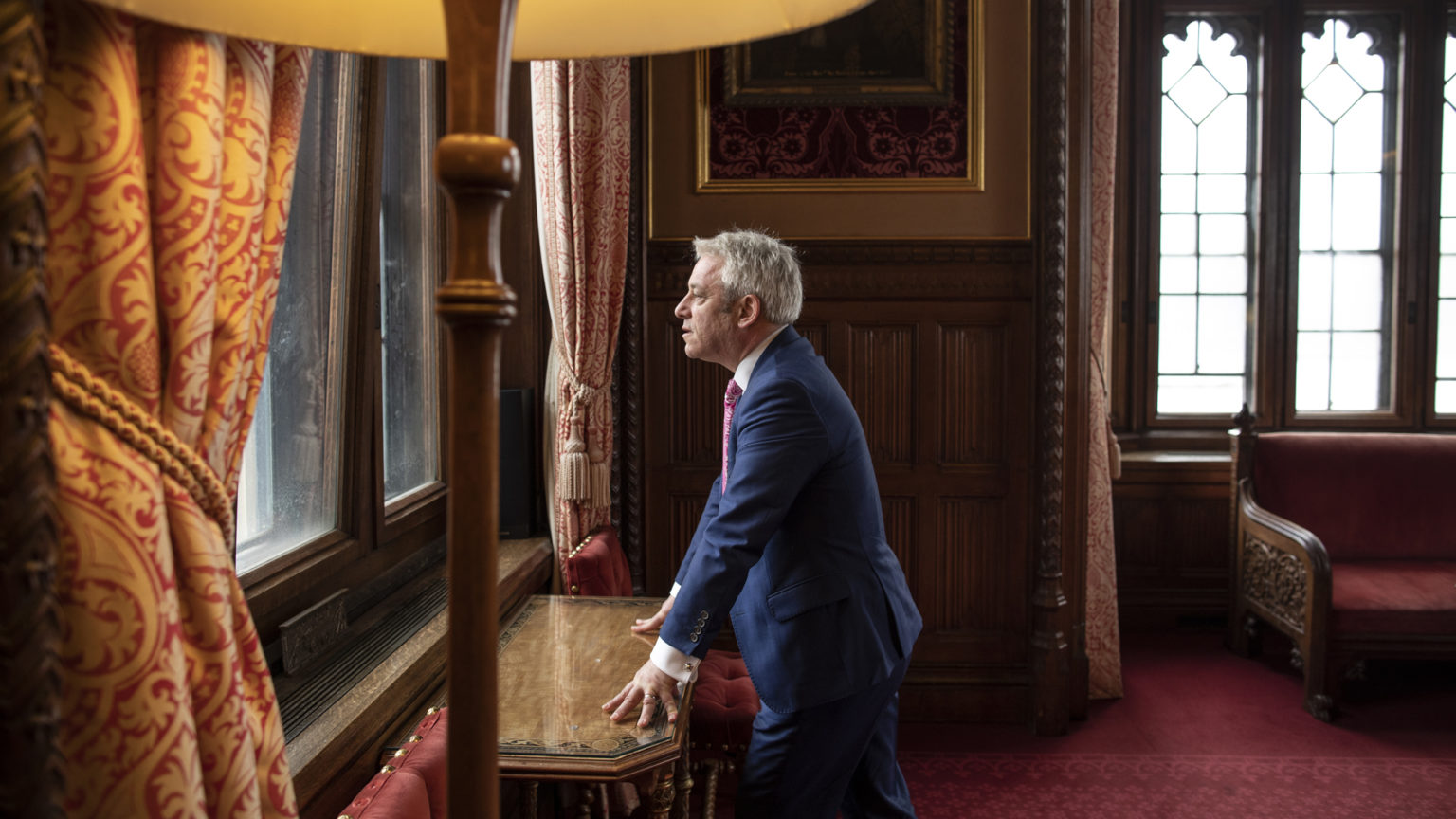 So it’s goodbye to John Bercow. The longest-serving speaker of the House of Commons since the war, the small man with the big thesaurus, has finally stepped down.

His last Prime Minister’s Questions (PMQs) yesterday proved a fitting send-off. This weekly session, intended to be just 30 minutes, has during Bercow’s tenure become ever-longer – in part, at least, due to his own verbosity; his habit, as the author Ben Schott has put it, ‘of using 10 words when two would suffice’.

The session stretched to well over an hour yesterday, groaning under the weight of both sincere and tongue-in-cheek well-wishes from Commons leaders. Prime minister Boris Johnson, unsurprisingly, opted for the latter.

Though Bercow began life as a Conservative – and a pretty hard-right one at that – he has long been considered by Tories as a turncoat, increasingly in line with Labour. But more importantly, in the Brexit saga his decisions have at key points allowed this Remainer Parliament to land blows against the Leave majority.

Johnson yesterday praised Bercow’s ‘10 tumultuous years in your high chair’, before taking some sly swipes at his activism, which in many MPs’ eyes has destroyed the impartiality of his office. ‘You have been a player in your own right, peppering every part of the chamber with your thoughts and opinions’, Johnson said, pointing to Bercow’s various ‘legislative innovations’.

Perhaps Bercow’s most controversial innovation was in January, when he ignored his clerks’ advice and allowed an amendment to a government motion to be laid by Remoaner MP Dominic Grieve ultimately aimed at stymying a No Deal exit. In the words of the BBC’s parliamentary anorak Mark D’Arcy, it ‘drove a coach and horses through accepted normal practice’.

‘If such a precedent can be made to stick, it would be a huge blow against any government’s accustomed control over the business of the Commons’, D’Arcy added. And so it was to be. Bercow would later allow backbench MPs to take control of the order paper in order, among other things, to pass the Surrender Act to legislate against No Deal – closing off the path to a clean-break Brexit.

Amid the uproar in the Commons that followed the passing of the Grieve amendment, Bercow told the house, ‘I am not in the business of invoking precedent, nor am I under any obligation to do so… If we were guided only by precedent, nothing would ever change.’ Then, two months later, he had suddenly became a traditionalist, invoking a 1604 convention to stop Theresa May holding another vote on her Brexit deal.

Bercow has styled himself as a defender of the backbenches against the overreach of the executive. He expanded urgent questions and emergency debates to keep government and ministers more on their toes. All good things in themselves. All true democrats should want a parliament that keeps the executive in check.

But during the Brexit process, Bercow’s role has also been to empower parliament at the expense of the electorate, giving them all manner of unusual, unprecedented means to overturn the vote for Brexit.

He has been quite open about his pro-Remain views, and the fact that he thinks it is the right of MPs to defy the wishes of their own constituents. In 2017, after a press and public backlash against 12 anti-Brexit Tories, he effectively stood up for MPs’ right to thwart Brexit. ‘In voting as you think fit’, he reassured MPs, ‘you are never enemies of the people. You are dedicated, hard-working, committed public servants, doing what you believe to be right for this country.’

Yesterday Jeremy Corbyn lauded Bercow as a democratic champion ‘in the tradition of the great Speaker Lenthall’ – the man who stood up to King Charles I in 1642 when the king turned up in parliament, flanked by hundreds of soldiers, demanding to know the whereabouts of five MPs he accused of treason.

Bercow hasn’t so much stood up for parliament’s traditions as he has bent and broke them as he sees fit to the end of crushing the biggest public mandate in our history. Whatever you want to call that, it isn’t democratic.

When parliament voted this week on a one-line bill to hold a General Election, opposition parties put down amendments seeking to fiddle the franchise to include 16- and 17-year-olds and EU citizens. (Two groups who are generally pro-Remain and anti-Tory.)

The government breathed a sigh of relief when deputy speaker Sir Lindsay Hoyle, filling in for Bercow that day, refused to select the amendments.

Hoyle was right to do it, of course. Such a profound change in how we do politics, and in what citizenship means in this country, should not be done so hastily by a bunch of MPs trying to rig an upcoming election in their favour.

But though it is perhaps unfair to suggest that Bercow might have done otherwise, that observers even thought such a change might have been possible tells us something about the Bercow era. He has, if nothing else, wrecked the presumption that the speaker is an honest broker, following the rules impartially.

Whether or not Bercow’s exploits in recent years were the product of his belief in parliamentary scrutiny, his loathing of this current government or his loathing of Brexit is very much up for debate. What is clear, though, is that his lasting legacy will be as an enthusiastic enabler of the Remainer Parliament, the most openly anti-democratic in recent memory.

As one government source told Buzzfeed’s Alex Wickham last month, just after Bercow announced his retirement, ‘Bercow thinks he’ll walk away as a hero, when most people in the country don’t know who he is and those that do think he’s a nauseating wanker. The man has been central to stopping Brexit – the nation won’t thank him.’