The madness of Extinction Rebellion

This is an upper-middle-class death cult and we should ridicule it out of existence. 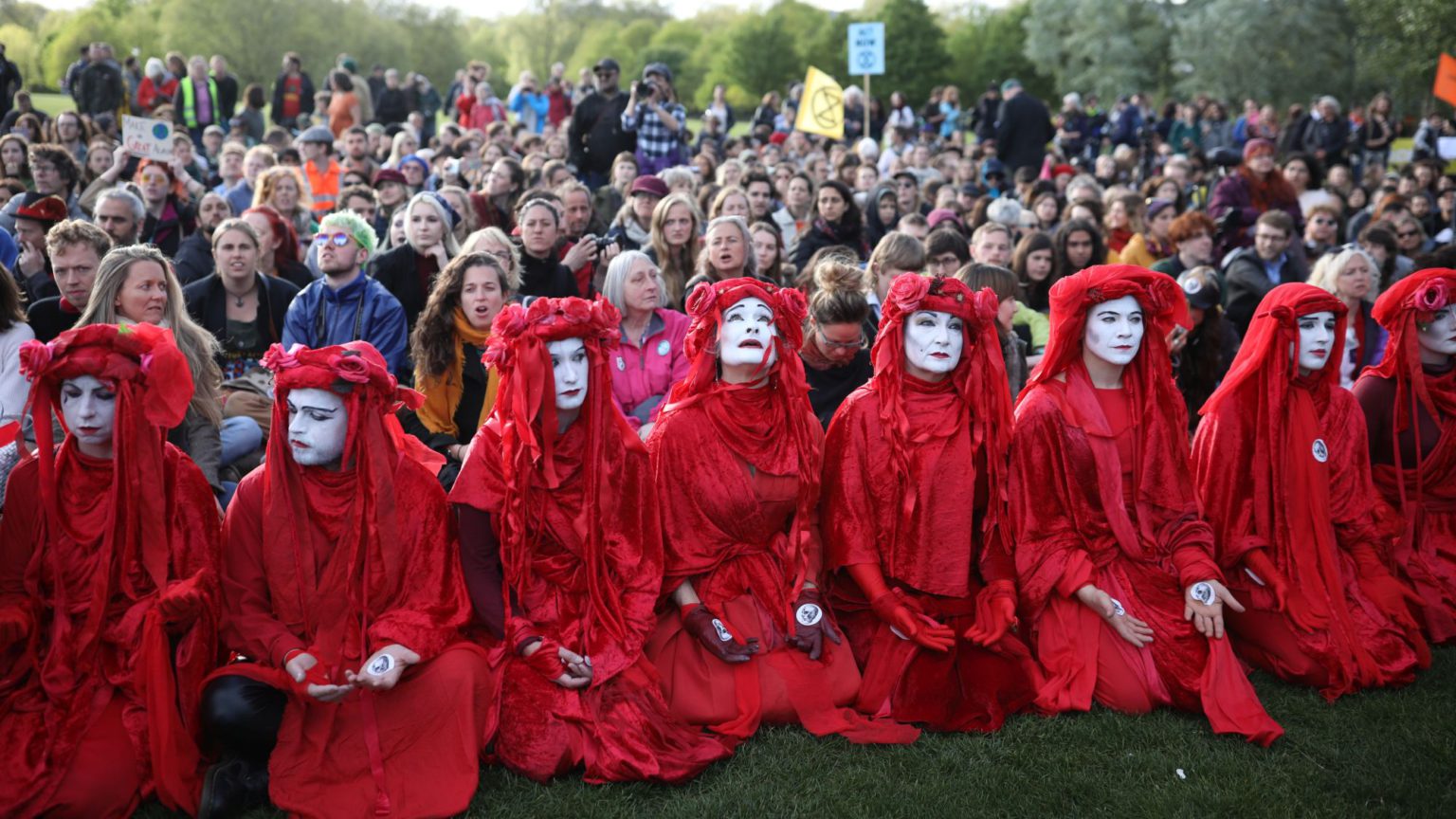 Yesterday, in London, I witnessed an eerie, chilling sight: I saw a death cult holding a ceremony in public.

The men and women gathered outside King’s Cross station and formed a circle. They swayed and chanted. They preached about End Times. ‘What will you do when the world gets hot, what, what?’, they intoned, conjuring up images of the hellfire they believe will shortly consume mankind. They sang hymns to their god – science. ‘We’ve got all the science / All that we need / To change the world / Hallelujah’, they sang, rocking side to side as they did so.

They demanded repentance. ‘Buy less, fly less, fry less’, said one placard. Catholics only demand the non-consumption of meat on Fridays, as an act of penance to mark the day of Christ’s death. This new religion demands an end to meat-consumption entirely, as penance for mankind’s sins of growth and progress.

And like all death cultists, they handed out leaflets that contained within them ‘THE TRUTH’. The leaflets foretell floods and fire: ‘We are in trouble. Sea levels are rising… Africa and the Amazon are on fire.’ The only word that was missing was locusts. They can’t be far behind these other ghastly visitations to sinful mankind.

And if you question their TRUTH? Then, like those heretics who were hauled before The Inquisition 500 years ago, you will be denounced as a denier. A denier of their revelations, a denier of their visions. ‘Denial is not a policy’, their placards decreed. Spotting me filming their spooky, apocalyptic ceremony, one of the attendees waved that placard in my face. A warning from the cult to a corrupted outsider.

This was, of course, Extinction Rebellion. Let us no longer beat around the bush about these people. This is an upper-middle-class death cult.

This is a millenarian movement that might speak of science, but which is driven by sheer irrationalism. By fear, moral exhaustion and misanthropy. This is the deflated, self-loathing bourgeoisie coming together to project their own psycho-social hang-ups on to society at large. They must be criticised and ridiculed out of existence.

Yesterday’s gathering, like so many other Extinction Rebellion gatherings, was middle-aged and middle-class. The commuters heading in and out of King’s Cross looked upon them with bemusement. ‘Oh, it’s those Extinction freaks’, I heard one young man say. It had the feel of Hampstead and the Home Counties descending on a busy London spot to proselytise the cult of eco-alarmism to the brainwashed, commuting plebs.

It was a gathering to mark Extinction Rebellion’s week of disruption. The group is asking people in London and other cities around the world to ‘take two weeks off work’ and join the revolt against the ‘climate and ecological crisis’. You can tell who they’re trying to appeal to. Working-class people and the poor of New Delhi, Mumbai and Cape Town – some of the cities in which Extinction Rebellion will be causing disruption – of course cannot afford to take two weeks off work. But then, these protests aren’t for those people. In fact, they’re against those people.

Extinction Rebellion is a reactionary, regressive and elitist movement whose aim is to impose the most disturbing form of austerity imaginable on people across the world. One of the great ironies of ‘progressive’ politics today is that people of a leftist persuasion will say it is borderline fascism if the Tory government closes down a library in Wolverhampton, but then they will cheer this eco-death cult when it demands a virtual halt to economic growth with not a single thought for the devastating, immiserating and outright lethal impact such a course of action would have on the working and struggling peoples of the world.

Extinction Rebellion says mankind is doomed if we do not cut carbon emissions to Net Zero by 2025. That’s six years’ time. Think about it: they want us to halt a vast array of human activity that produces carbon. All that Australian digging for coal; all those Chinese factories employing millions of people and producing billions of things used by people around the world; all those jobs in the UK in the fossil-fuel industries; all those coal-fired power stations; all that flying; all that driving… cut it all back, rein it in, stop it. And the people who rely on these things for their work and their food and their warmth? Screw them. They’re only humans. Horrible, destructive, stupid humans.

Progressive movements, as the name suggests, used to be about pursuing progress, pushing mankind forwards, creating a better, wealthier world for all. Extinction Rebellion wants the precise opposite. It wants to propel us backwards, to the Stone Age. It wants to reverse the most important moment in human history – the Industrial Revolution. It wants to undo that revolution’s liberation of mankind from the brutishness and ignorance of life on the land and recreate that old, unforgiving world in which we all ‘ate locally’, never travelled, danced around maypoles for fun, and died of cholera when we were 38.

The sheer backwardness of Extinction Rebellion was captured when two of its members appeared on Sky News yesterday morning. They complained, hysterically, about modernity. One of them bemoaned all the electricity that is used in a city like London. So the very lighting up and warming of cities, the electricity that powers homes and workplaces and transport systems and life-support machines, is offensive to these hair-shirted, self-flagellating loathers of arrogant humankind. ‘Switch it all off’, is their alarmingly immoral cry.

What is most astonishing about the Extinction Rebellion phenomenon is what an easy ride these people get in the media and from political types. They are treated as wise and radical defenders of reason and the future. Please. These people are a menace to good sense, rationality, truth and progress. Their predictions of hellfire if we don’t cut carbon emissions by 2025 are pure bunkum. They lie and spread fear and disrupt hard-working people’s lives. If you see this cult promoting its deathly propaganda on the streets of your city this week, give them a piece of your mind.