Those protesting Muslim parents are in the right

It is the LGBT education programme that is the real authoritarian force. 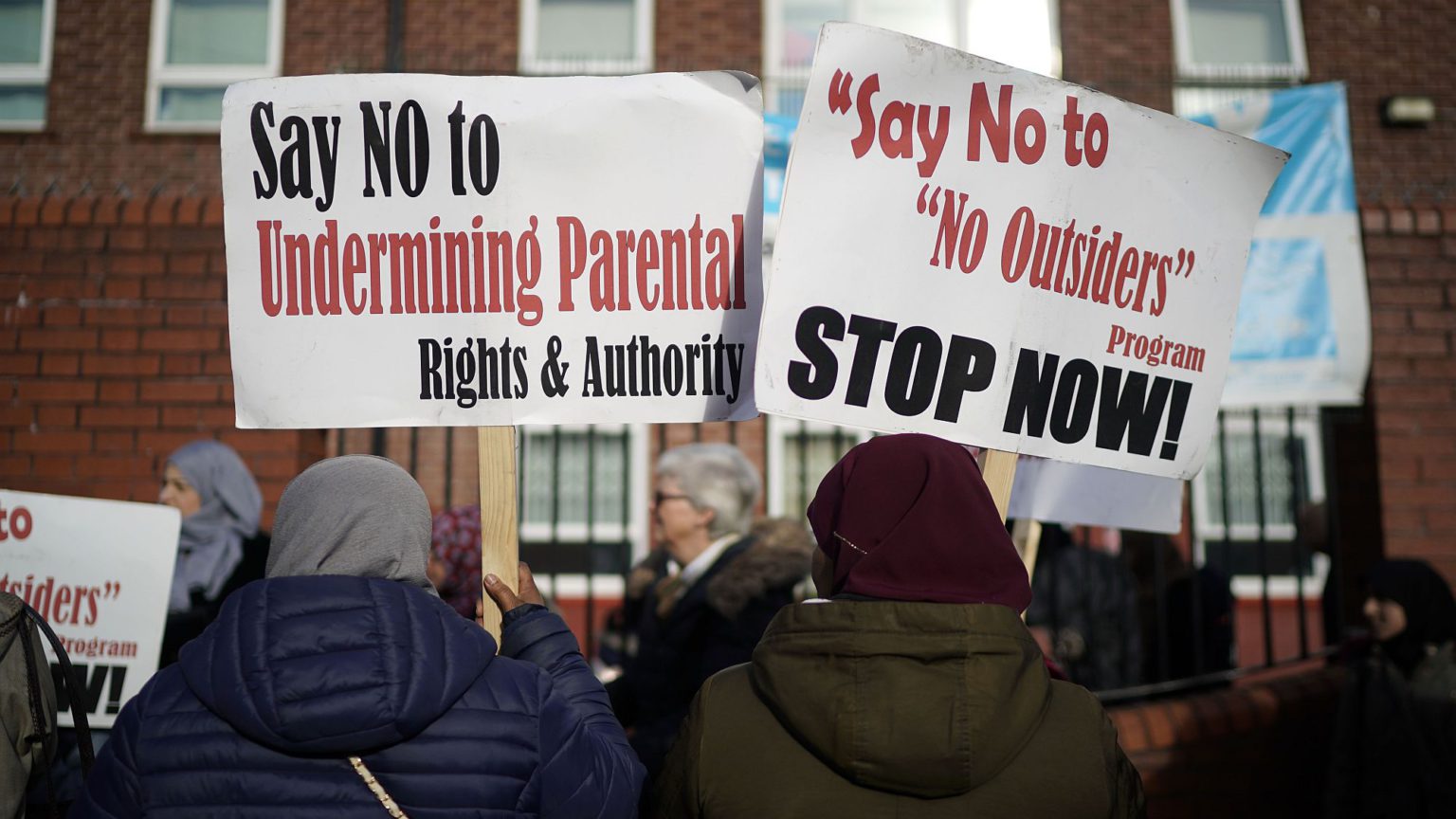 It started in January at Parkfield Community School in Saltley, Birmingham. Mainly Muslim parents began staging weekly protests against ‘No Outsiders’, an educational programme designed by Parkfield’s very own MBE headmaster Andrew Moffatt to teach the Equalities Act to children aged four to 11. According to Moffat, speaking on the BBC One current-affairs show Panorama, the programme’s purpose is to teach that ‘you can be who you want to be; you can be yourself’. The protesting parents, however, see things in more explicitly moral terms – they think the programme teaches children how they ought to live, whether as lesbian, gay or bisexual, or as males, females or something fluid in between.

At other schools, religious parents – mainly but not only Muslim – also began to take issue with so-called LGBT teaching. What began at Parkfield spread across the UK. But Parkfield remains at the centre of what has been turned into and presented as a face-off between faithful, zealous parents and secular, tolerant authorities.

From the authorities’ standpoint – that is, the standpoint of schools, the Department for Education, and right-thinking educationalists and activists – the problem lies solely with the parents. At the very least they have misunderstood what the school is trying to do, as Labour councillor Tristan Chatfield put it. At worst, they constitute ‘a mob, chanting and shouting and engaging in intimidating and threatening behaviour’, to quote Sara Khan, a human-rights activist and, since January, the government’s lead commissioner for countering extremism. ‘I think we have to recognise that and call it out for what it is’, she told Panorama. ‘[What] we’re seeing in Birmingham can only be described as extremism. It’s whipping up tension, it’s whipping up fear, it’s whipping up hysteria’, she said.

These protesters are not just Muslims, they’re Christians and Jews, too, Khan continued. But above all, she said, they’re people from a ‘very conservative background’. Indeed, that seemed to be the point of view of Panorama and the punditsphere. The protesting parents, in Birmingham and elsewhere, were portrayed as throwbacks to the days of Section 28, Maggie Thatcher and the ban on the promotion of homosexuality in schools. They have been accused of standing against the tide of history, refusing to acknowledge the reality of modern, genderfluid Britain. They have been accused, in short, of the very thing No Outsiders was designed to combat – namely, intolerance.

And yet, throughout their statements, on their placards and in their interviews, the parents at Parkfield and beyond have come far closer to articulating the true meaning of tolerance than any of their supposedly tolerant critics. This was clear in the response of one protester to the Panorama presenter’s question of whether he was homophobic. ‘We have nothing against LGBT communities’, the protester said. ‘But I shouldn’t have to agree with the way that you’re living.’

In other words, he, as a Muslim, lives his life as his faith dictates, and he accepts that others are free to do likewise. That is what it is to be tolerant. It doesn’t mean that one has to respect or affirm, let alone agree with, other people’s moral choices, sexual or otherwise. Far from it. Being tolerant doesn’t and can’t affect the exclusive nature of one’s faith. But it does mean you accept that others’ moral choices, no matter what you think of them, are only for others to make. Or as a rabbi put it on Panorama: ‘The Bible forbids [being gay] for Jews. But it doesn’t tell you [as a non-Jew] what you should do.’

And this is why the conflict between an increasing number of primary schools and largely Muslim parents is not what it seems. For what the parents are insisting on is precisely this freedom to live one’s life as one’s conscience and especially faith dictates. Because that freedom also includes the freedom to bring up your children as your conscience and faith say you should. The freedom, that is, to bring them up according to what you, as a member of a faith or or other moral community, value. And, as difficult as it is for some to accept, this includes the belief that marriage should be between a man and a woman, or that homosexuality is an ‘abomination’, as the infamous passage in Leviticus has it.

It is the parents, therefore, who are experiencing the school as the intolerant force. For it is the school, through programmes like No Outsiders, that is refusing to accept that the moral choices of others, in this case parents of faith, are only for those others to make. Instead, it is attempting to make those choices in place of parents, to re-educate children morally, to force a particular set of values and beliefs on to children who, being of primary-school age, still ought to belong to the moral universe of their parents. As one parent put it on Panorama: ‘The key question is who is the primary educator. Should [children] be learning these things from possibly biased teaching material, or at home from the parents?’

The problem here is not the ‘mob’ of parents, whipping up fear and hysteria at the school gates. It is the school whipping up intolerance at home. Schools are overstepping their role. They are conflating education with indoctrination, as the Parkfield placards put it. It is a polemical but useful distinction. Learning to read and write, to add and subtract, teaches children how to think. But it doesn’t tell children what to think. And it certainly doesn’t tell them how they ought to live. This isn’t to say that teachers shouldn’t be telling kids off for being rude or mean to other kids. They should. But encouraging kids to be polite and kind to one another is very different to encouraging them to judge others guilty of some ism or phobia.

In the conflict over LGBT lessons, the state, one hand gripping the Equality Act 2010 and the other dishing out accusations of homophobia, reveals its intolerant face. Hence, policymakers and pundits talk of tackling Islamophobia, which the All-Party Parliamentary Group on British Muslims defined as a ‘type of racism that targets expressions of Muslimness or perceived Muslimness’. Yet when Muslims really do express their Muslimness, as they are doing in their disputes with various primary schools, it seems policymakers and government advisers are only too happy to target them – and, sadly, any others who aspire to live according to their conscience.

The state may preach tolerance, but it is betraying it in practice.