It isn’t Leavers who are authoritarian

Dubious surveys have been used to give a misleading picture of Brexit voters. 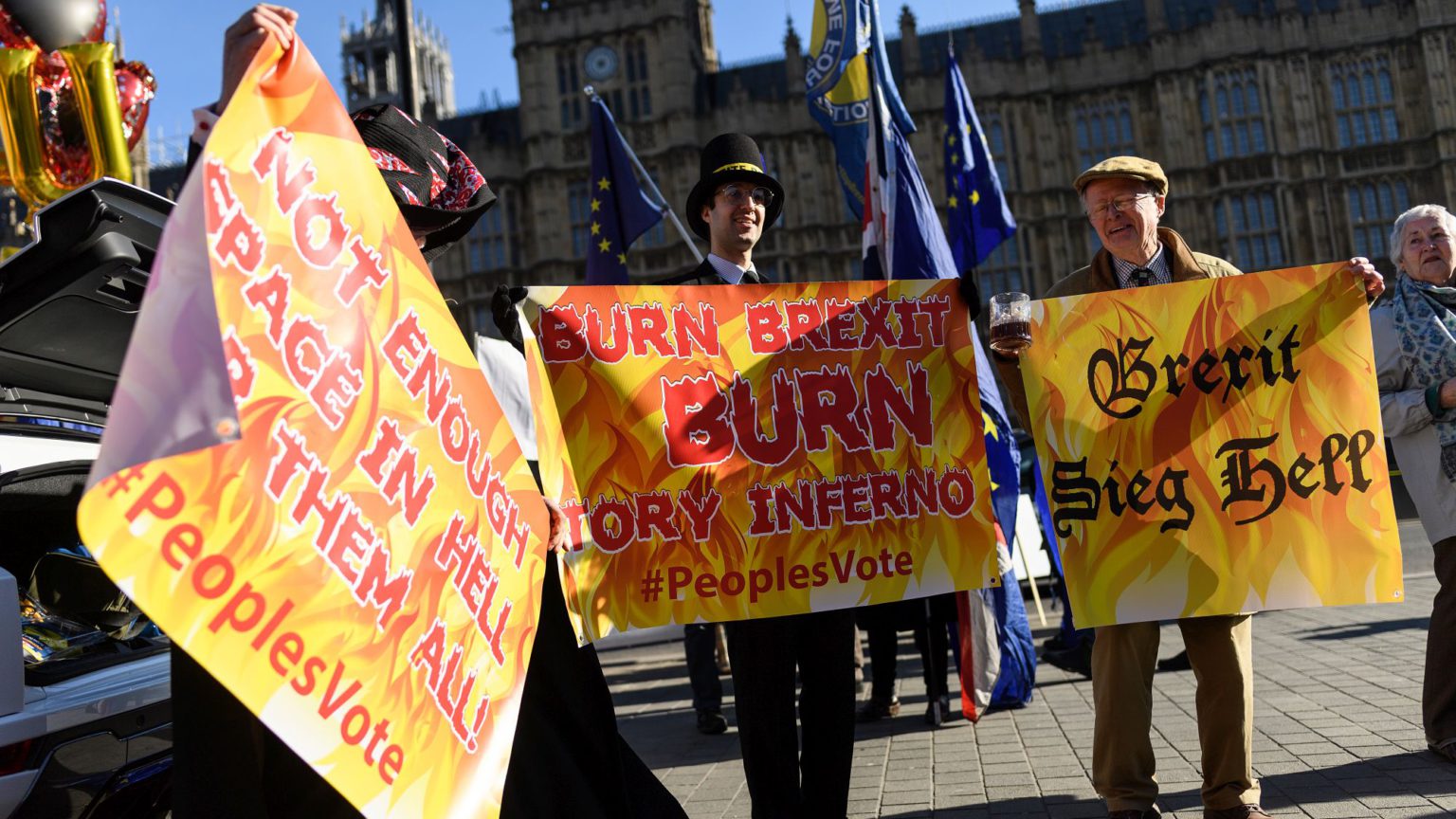 It has been scientifically confirmed that Brexiteers are bigots, ignoramuses and, above all, really, really authoritarian.

How do we know this? Because just under a year ago, something called the Online Privacy Foundation published an updated version of its 2016 psychological survey of 11,225 Britons. It found that Leavers were more authoritarian, less open and more conscientious than Remainers. It then explained that ‘intelligence has been found to be positively correlated with the… trait of openness… and negatively correlated with conscientiousness’.

The findings were reported in the New Statesman, the New Scientist and The Sunday Times, which even cited the findings as proof that ‘Brexit voters are less bright than Remainers’.

But there is a problem. The standard questionnaire that tests people for authoritarianism is designed to discover only right-wing attitudes. In fact, the survey actually uses something called the right-wing authoritarianism scale (RWA). According to the RWA, authoritarians are characterised by obedience to authorities which the individual considers to be established and legitimate, general aggression against groups considered undesirable by these authorities, and a high degree of adherence to social conventions.

Now, characteristics such as these could apply far more to the woke crowd than any other cohort. Yet, although the RWA was developed by psychologist Robert Altemeyer in 1981, it was not until 2017 that a team of American political psychologists used Altemeyer’s questions, albeit modifying their content, in order finally to create a left-wing authoritarian (LWA) test.

So what did the psychologists find? ‘Not only did LWA show a significant correlation with liberalism in both a sample of US college students and a separate nationwide sample of US citizens, it also showed overwhelmingly significant correlations with dogmatism, prejudice, and attitude strength.’ In other words, left-wingers are pretty much just as authoritarian as right-wingers.

Yet, as spiked editor Brendan O’Neill has argued, even the concepts of left and right are now becoming obsolete in Britain. ‘The left v right feels increasingly like a relic’, he writes. ‘The divide now is between Leavers and Remainers; between those who have a strong sense of nationhood and those who see globalist institutions as the best means of organising political life.’

Interestingly, this split was predicted more than two decades ago by British political scientists in a paper entitled ‘Measuring left-right and libertarian-authoritarian values in the British electorate’, which noted that the common assumption that ‘political attitudes are arranged uni-dimensionally along a left-right ideological continuum… has been shown to be implausible in numerous studies’. The authors went on to say that ‘issues associated with the libertarian-authoritarian dimension may in time compete with the traditional left-right dimension for a central position in British political conflicts’.

This libertarian-authoritarian dimension informs, often unconsciously, the elitist narrative about Brexit (and Trump). So, in conclusion, the Online Privacy Foundation claimed that ‘many voters lack the skills to evaluate critically the information which is being presented’. This prompted it to ask questions with authoritarian implications: ‘Should access to and the use of social media and other personal online data be better regulated?… [H]ow do we ensure that we unleash the power of personal data for social good?’

That reflexive disdain for the average Briton has informed several supposedly data-driven analyses. So, in a survey conducted soon after the Brexit vote, the European Journal of Political Economy concluded that Leavers were old, white, uneducated, technologically incompetent, on welfare, in poor health, and unsatisfied with their lives. Alternative viewpoints from academia came later, with, for instance, political scientists from the London School of Economics finding that ‘the profile of Brexit voters is more heterogeneous than initially thought, and includes voters with high education and “middle class” jobs’.

However, no amount of research has changed the narrative in the mainstream media that Leavers are all authoritarian thickos. Thus, in April this year, the Guardian ran a report with the dire headline ‘UK poised to embrace authoritarianism, warns Hansard Society’. Yet the Hansard Audit 2019, on which the Guardian report was based, does not even have the words ‘authoritarian’ or ‘authoritarianism’ in it. In fact, what the audit actually reveals is widespread disillusionment with politicians, following their failure to adhere to the decision made by the 17.4million voters in the 2016 referendum. Hence, according to the audit, only 25 per cent of the public have confidence in MPs’ handling of Brexit; 47 per cent feel they have no influence at all over national decision-making; and 72 per cent feel that the system of governing needs quite a lot or a great deal of improvement.

Indeed, according to Hansard, it is Remainers, rather than Leavers, who are more willing to defer to civil servants, judges, and peers in the House of Lords. Which tells you pretty much all you need to know about who are the real authoritarians today.

Kevin Baldeosingh is a professional writer and author.