Power to the Sudanese people

Protesters are not just battling the military regime, but its international backers, too. 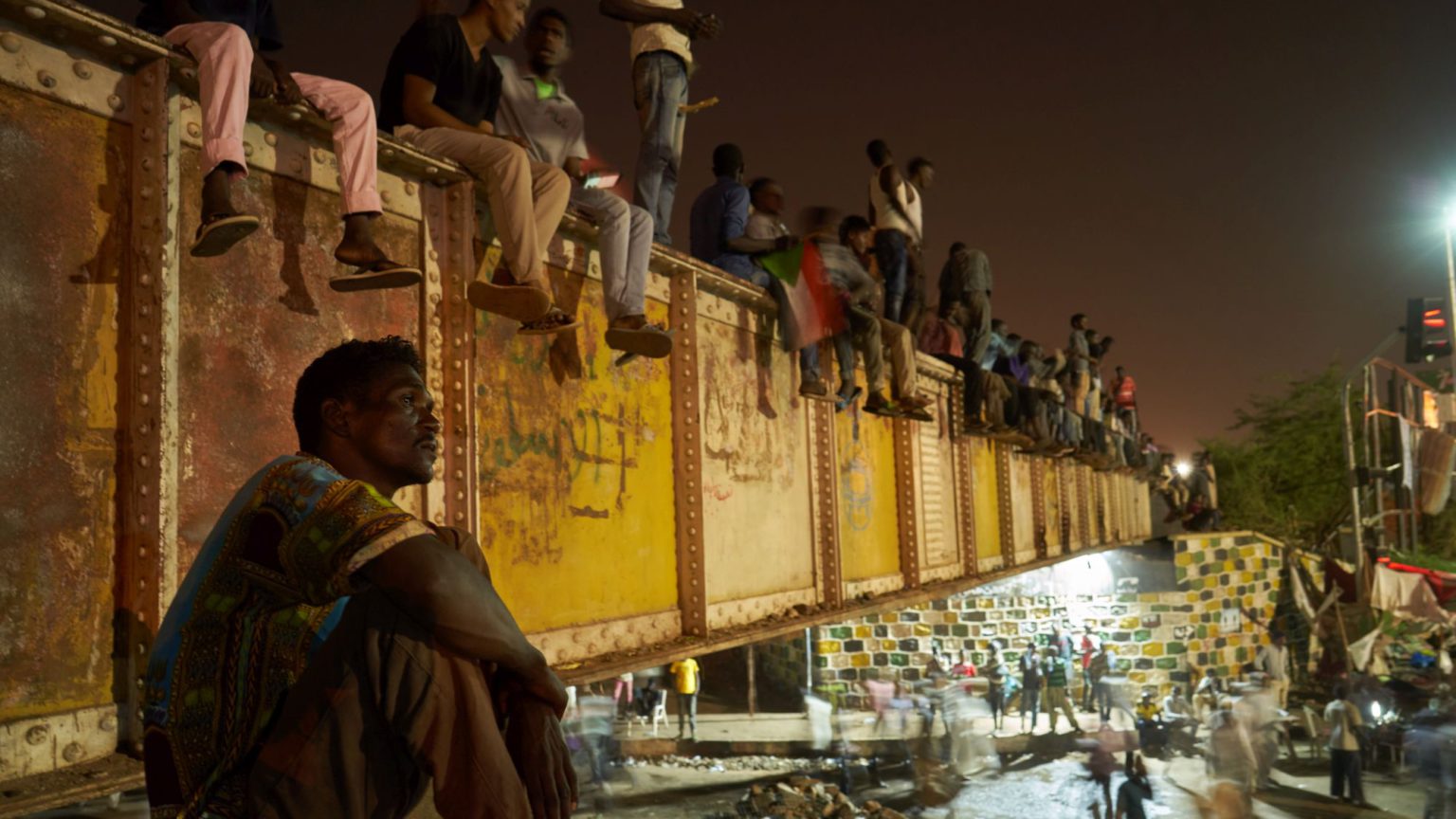 When, on 11 April this year, the end came for the 30-year reign of Sudan’s president, Omar al-Bashir, there was an air of inevitability about it.

From December 2018, an increasingly restive populace had turned to the streets to protest Bashir’s rule. ATMs had stopped issuing money, fuel was in short supply, and queues snaked away from evermore expensive, understocked food stores. Protesters’ desperation to end their economic hardship was matched only by their stated desire to turf out the ruling National Congress Party, and its Islamist leaders, and move Sudan towards democracy. Bashir, as the face of austerity, repression and corruption, had to go.

The army’s intervention on 11 April was swift and bloodless – and predictable. Bashir was deposed and NCP politicians were placed under house arrest.

Yet, while the military putsch signalled the end of Bashir’s reign, it did not signal the end of his regime. If its persistence was not clear in the aftermath, when the acceptable face of military dictatorship, Lieutenant General Abdel Fattah al-Burhan, quickly replaced Bashir loyalist and vice-president, Lieutenant General Ahmed Awad Ibn Auf, as leader of the Transitional Military Council (TMC), it is now – and brutally so. For after weeks of ongoing demonstrations, and behind-closed-doors negotiations between the TMC and the protesters’ political body, the Alliance of Freedom and Change, the TMC has intervened again. This time, however, it was against the protesters.

So it was that over the past few days, the TMC scrapped all existing agreements with the coalition, and sent in the Rapid Support Forces, a notorious paramilitary group commanded by General Mohamed ‘Hemeti’ Hamdan, who is now also Burhan’s deputy. The RSF then opened fire on protesters at a sit-in outside the defence ministry in central Khartoum, reportedly killing 30, and injuring many more.

This was not the act of a military council committed to the ‘transition’ of its title – and certainly not one committed to the ‘transition’ to democracy that protesters are demanding. This was the brutal, despicable act of a regime, a state, committed to preserving and protecting its collective interests. It is not concerned with revolution or democratic transition; it is concerned with re-imposing, through force of arms, ‘order’ and ‘stability’ – the weasel words of an autocracy. Self-preservation is its motor force, and Bashir was a necessary sacrifice. It doesn’t want to dismantle the house that Bashir built; rather, it wants to maintain it, and perhaps even develop it, reinforcing Bashir’s intricate network of patronage and cronyism, which comprises military and paramilitary groups, intelligence agencies and shadowy parallel security forces, tribal leaders and businessmen.

As one activist put it: ‘What is happening is the mask is finally falling. The military is not different from the government before it. They are not what they said they are. They don’t want change and they want power for themselves. Now, everyone knows what they are up against.’

And so the battle lines are drawn, between, on one side, the spliced together military-security edifice of the Sudanese state, and, on the other, the protesters, their organisational cells, their political coalition and their trade unions. And so the TMC is clamping down on unrest, while talking of internationally supervised elections at some vague future date. The protesters, alongside the Sudanese Professionals Association, have now initiated a general strike.

Except there is also an international dimension to the deepening civil conflict in Sudan. Hence those pushing for democracy, those pushing for an end to autocratic corruption and Islamist stricture, are not just up against the military and security apparatus. They are also up against external actors, who want to preserve the status quo as a supposed force for stability, and who, perhaps above all, gain from it as a client and ally.

Chief among these external actors is Saudi Arabia, with its Gulf allies in tow. Just nine days after Bashir’s fall, Saudi Arabia and the United Arab Emirates pledged their support to the TMC, and promised to pay $500million into the Sudanese central bank to plug depleted foreign currency reserves, with a further $2.5 billion to be sent in food, medicine and petroleum products. Saudi loyalty is not a shock. Thanks to a $2.2 billion deal struck between the House of Saud and Bashir in 2015, with Burhan reportedly playing a pivotal role in negotiations, over 10,000 Sudanese soldiers, with Hemeti’s RSF making up the bulk, are currently central to the Saudi war effort in Yemen.

Also not a shock is the support of Egypt and its own military dictator, General Abdel Fattah el-Sisi. In Sudan’s military rulers, he sees brothers in arms. Moreover, since the overthrow of Bashir, who was a pragmatic ally of Islamist politicians, Sisi also sees the military council as a bulwark against the ever-present threat of the Muslim Brotherhood. Little wonder, then, that Sisi, in his role as the chair of the African Union (AU), publicly welcomed the putsch, despite the AU prohibiting coups as ‘unconstitutional changes of government’ (something Sisi himself knows all about). As one demonstrator told the Financial Times, ‘There are three forces holding us back. Saudi Arabia, the United Arab Emirates and Egypt’.

He might have added a fourth, comprising the US and the EU. Which might come as a surprise given the one-time pariah status of Bashir’s Sudanese regime. At the height of the Darfur crisis a decade ago, politicos and celebs fell over themselves in the rush to condemn Bashir, liken him to Hitler and attempt to try him for genocide at the International Criminal Court. One therefore might have expected another round of easy, blundersome posturing against the military council, which looks set on continuing the spirit of Bashir’s wretched rule. Yet the harshest words the US, the UK and Norway (as the three key mediators in Darfur and the war between Sudan and South Sudan) could muster consisted of urging the military council to embark on an ‘orderly transition to civilian rule’.

But this makes sense in the context of the US’s improved relationship with the Sudanese security forces as a frontline in counter-terrorism. A rapprochement which began under President Obama has been continued, albeit haphazardly and lazily, by the Trump administration. And it makes sense in terms of the US’s regional alliance with Saudi Arabia against Iran. The Sudanese state is therefore no longer a genocidal, terrorist-sponsoring enemy of the US, as it was for much of the 1990s and 2000s. It is now central to Saudi Arabia’s and therefore America’s regional ambitions. From a US-Saudi perspective, better a brutal but stable autocracy, that serves the their regional interests, than the potential for the stateless anarchy that the overthrow of the military council could unleash.

For the EU, there is another motive for ensuring the perpetuation of the military regime – namely, addressing the ongoing migrant crisis. Since the creation of the ‘Khartoum Process’, signed in the Sudanese capital in 2015, the EU has been working with assorted states, despotic or otherwise, to control migration between the Horn of Africa and Europe. A working Sudanese state, complete with effective intelligence agencies and security forces, is crucial to this objective. Hence the EU established a Regional Operational Centre in Khartoum, staffed jointly by European and Sudanese police, and partially reliant on information provided by the Sudanese intelligence agencies. What the EU does not want, above all, is a civil conflict taking down the Sudanese state apparatus, and turning yet another territory into a source of disorder, mass displacement of peoples, and human trafficking.

This, then, is what the Sudanese protesters are up against. Not just a regime that, to all intents and purposes, is Bashir’s in spirit, if not in person. But also a regime that too many regional and international actors desperately do not want to fall.