The elite’s smears won’t work, because they just aren’t true. 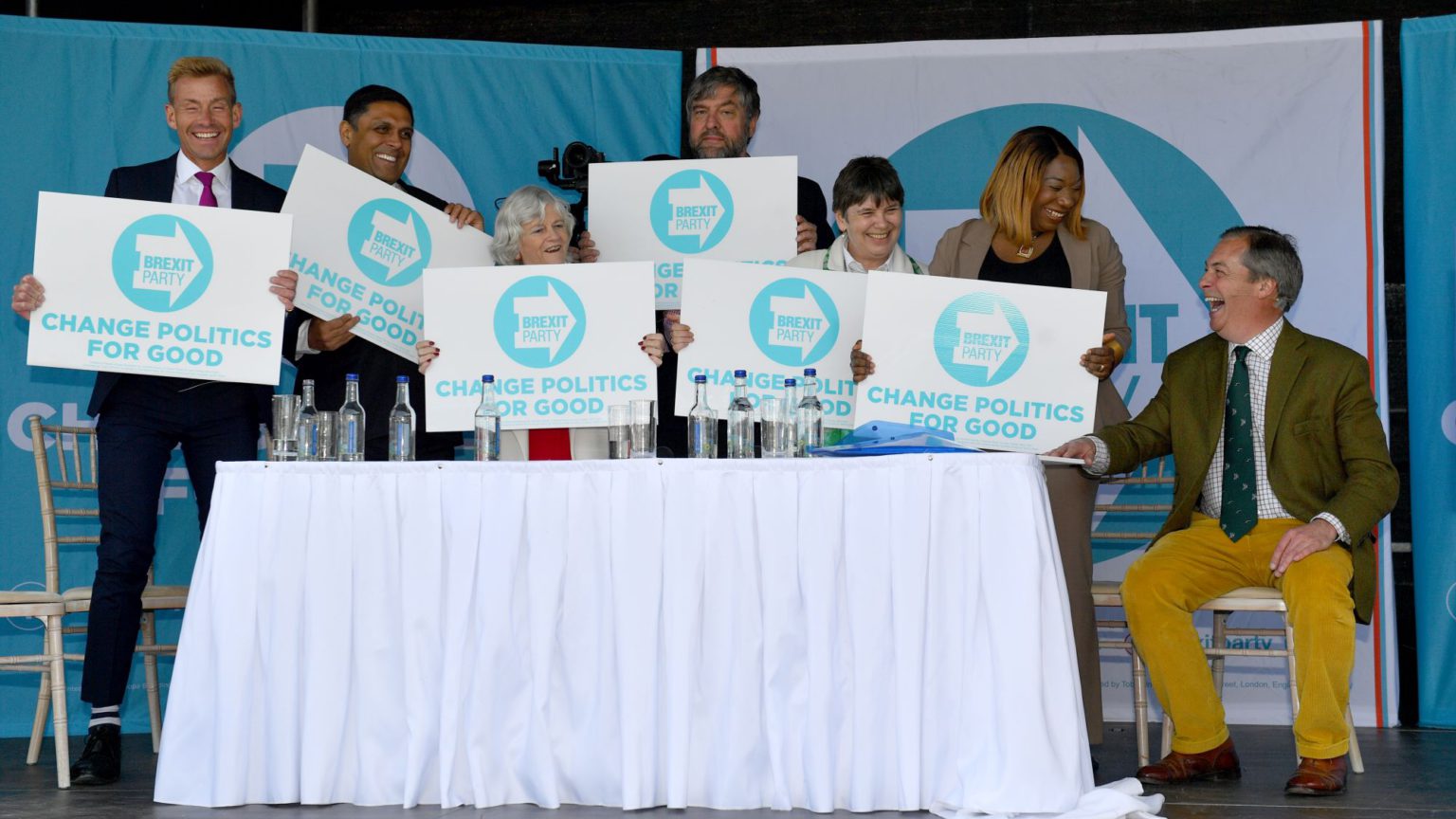 One of the most beautiful things in British public life right now is the disparity – the colossal disparity – between the media smears about the Brexit Party and the continued success of the Brexit Party. It’s wonderful to behold. Increasingly embittered Remainers from the media set and the political class hurl slurs and epithets at the Brexit Party, insisting with increasing shrillness that it’s a far-right outfit, loopy too, a coalition of extremists whose rallies echo Hitler’s robotic mass gatherings in Nuremberg. And yet then come the opinion polls, one after another, all showing the Brexit Party soaring ahead in the public’s affections. The elite is throwing a lot of shit at the Brexit Party, but it just isn’t sticking.

The attacks on the Brexit Party, and the utter failure of the attacks to impact on public sentiment, reveal two things. First: the debasement of political life at the hands of the technocratic elites. Having spent the past three decades draining public life of politics, morality and ideology, in favour of presenting themselves as the cool, neutral ‘managers’ of society, these people have completely forgotten how to do politics. Their outsourcing of political authority to Brussels, and their eschewing of ideological debate in preference for the drab managerialism of the so-called Third Way, has led to their own infantilisation, to their transformation into bureaucrats ill-versed in substantial discussion. This is why they must now rely either on fear (‘a Hard Brexit will plunge us into dystopia’) or insult (‘the Brexit Party are far-right weirdos’). Because in hollowing out political life, and self-consciously elevating it above the rough and tumble of democratic debate, they made themselves bereft of conviction, ideas, even basic debating skills. All they have left as a means of public persuasion is terror and abuse.

This has become a serious problem in 21st-century public life – the shift away from discussing ideas and policy towards obsessing over an individual’s alleged character or ‘hidden motives’. The Brexit Party has received an extraordinary amount of character assassination – or rather, attempted character assassination. Claire Fox’s political past is dredged up, by those who clearly have nothing of substance to say about her political present and her arguments in defence of democracy. Nigel Farage is branded ‘far right’, with not so much as a sliver of evidence: everyone’s ‘far right’ in the eyes of the politically illiterate technocratic elite. ‘WHO FUNDS YOU?’, anti-Brexit observers bark at the Brexit Party and everyone else they disagree with. Whenever you hear this question, the witless cry of panicked elites, you know you’ve won the argument. It’s because they’re unable to confront what you’re actually saying that they go looking for the billionaire or Dark Money foundation or Jew that they’re conspiratorially convinced is pulling your strings.

Then there’s the second thing revealed by the non-sticking shit being thrown at the Brexit Party – the fact that the old, decaying establishment increasingly struggles to connect with the public. Their borderline McCarthyite assaults on everyone associated with the Brexit Party just aren’t working. Day after day they brand the Brexit Party fascistic and dangerous, and yet its popularity grows. The most recent poll suggests 34 per cent of voters plan to support the Brexit Party at the Euro elections on 23 May – more than Labour (21 per cent) and the Tories (11 per cent) combined! That’s extraordinary for a party founded just weeks ago. The campaign of demonisation hasn’t worked because the people behind it – technocratic politicians, out-of-touch Remainer MPs, the liberal media – can make hardly any connection with ordinary people these days. And they can increasingly sense this, too. Witness Nick Cohen’s boilerplate column in the Observer yesterday in which he bemoaned the media’s failure to shift politics away from Brexit and in a more ‘desirable’ direction – this is the wail of a collapsing establishment horrified that its fury and bluster and conspiracy theories make no impact whatsoever beyond certain parts of London.

Indeed, not only has the smearing of the Brexit Party not worked – it is likely to backfire and end up helping the Brexit Party. See Andrew Marr’s incredibly ill-advised attempt at a ‘gotcha’ against Nigel Farage on TV yesterday morning, when he kept throwing Farage’s past statements at him and demanding: ‘DO YOU STILL THINK THIS WAY?’ It was meant to embarrass Farage, but it embarrassed the BBC, confirming that the corporation has very little sense of what voters are thinking, why the Brexit Party is popular, and that the vast majority of people are sick to the back teeth of media gotchas, journalistic pontification and offence archaeology and are crying out for some proper, principled discussion.

Here’s the thing: the rise of the Brexit Party is the least strange thing to happen in British politics in years. It makes perfect sense. It is entirely rational. This is a group of politicians and voters uniting around a clear and important cause – the defence of democracy. These are people who for three years have watched as the establishment reneged on its promise to enact the 2016 referendum result. These are people who have watched as their own MPs have conspired to thwart the thing they voted for in 2016. These are people who feel lied to and betrayed, and who believe that democracy will be seriously harmed, perhaps irreparably, if the largest democratic vote in UK history is undermined. Call off the thinkpieces, park the conspiracy theories, chill your McCarthyite urges, because it’s as clear as day why the Brexit Party is doing well – because millions of British people believe in democracy and they’re prepared to vote for it and fight for it.