Zizek vs Peterson: an engaging mismatch

A beguiling, confusing intellectual bout in which neither side seemed to know where to aim. 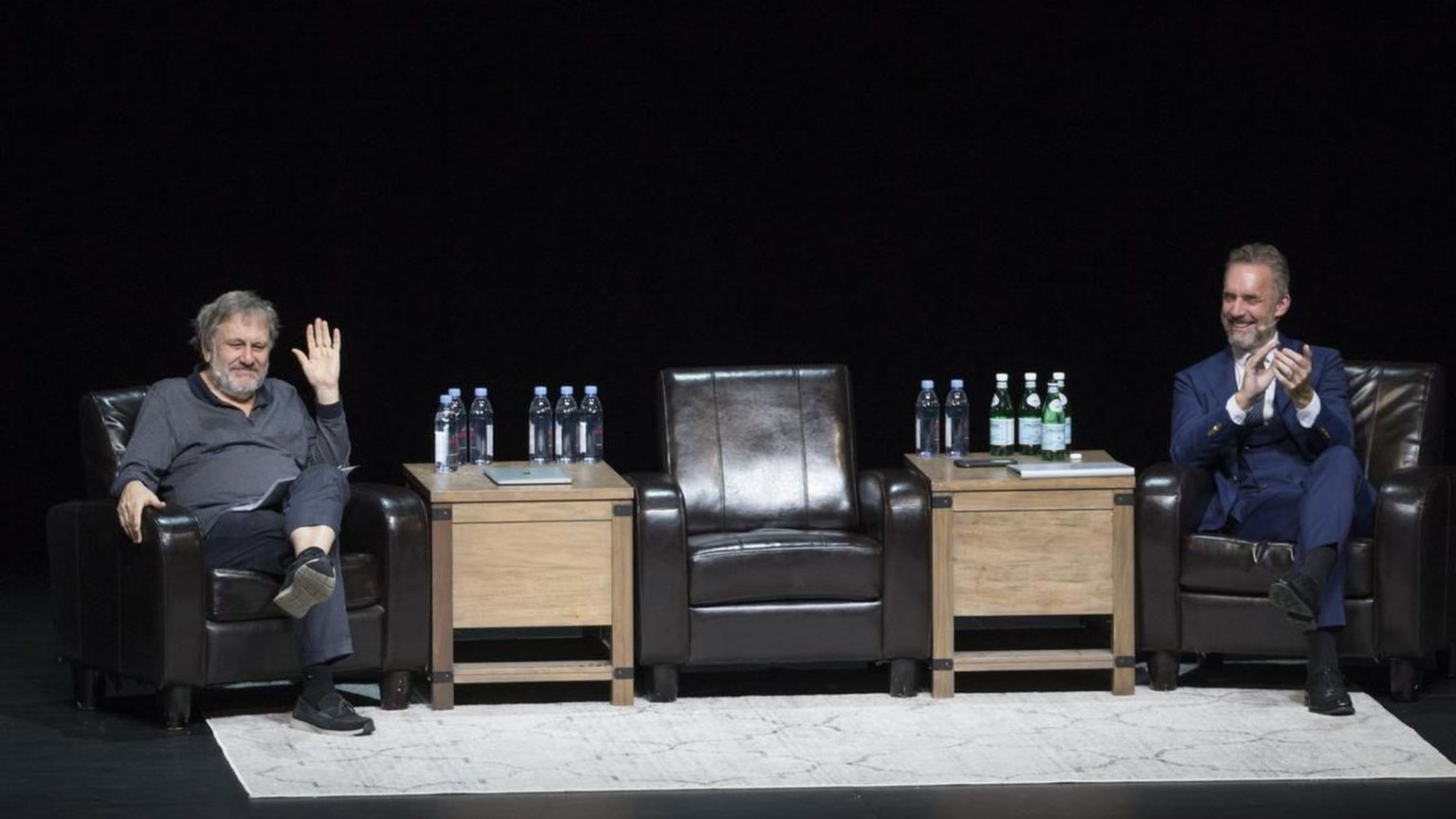 Hundreds of thousands, perhaps millions, of people watched illegal livestreams of this Easter weekend’s most hotly anticipated competitive display, rerouted via the official pay-per-view stream, while thousands more packed out Toronto’s Sony Centre to witness a mismatch of epic proportions. The philosophical debate between Slavoj Zizek and Jordan Peterson – entitled Happiness: Capitalism vs Marxism – had been billed and talked about like a heavyweight fight since its announcement in February, though, if it were a boxing match, it would have been abandoned prior to its start.

Indeed, far from being a mismatch between weights or categories, this competition appeared to be between two competitors of different disciplines altogether. As such, naming a clear winner turned out to be a futile exercise, despite fans of both academics claiming victory for their side. There was, however, a clear positive takeaway: both Peterson and Zizek – who are, respectively, the poster boys of the online right and YouTube left – appeared to want to find consensus despite their wildly differing backgrounds and skill sets, demonstrating to a highly factional audience that, even in our politically polarised times, it is still possible to bridge the gulf between extremes.

The debate between two of the world’s best-known academics followed over a year of back-and-forth jibing traceable to an article written by Zizek in the Independent in February 2018, entitled ‘Why do people find Jordan Peterson so convincing?’. Zizek argued that the appeal of this Jungian psychologist and University of Toronto professor derives from the left’s own inability to address the issues of race, gender and sexuality. All too often, Zizek argued, the leftist ignores essential differences in a bid to maintain the veneer of political correctness. Hence Peterson’s argument that, say, gender is a biological fact rather than a cultural construct finds an audience among those frustrated by the left’s attitude to difference. And at the same time as the PC left ignores all essential differences (cultural or otherwise), it also wants to defend as inalienable the right of the individual to assert his or her difference — that is, to be defined by his or her own particular configuration of race, gender, sexuality, religion, and so on. Given this internal contradiction (between a denial of essential differences and an assertion of the right to be different), it would seem that if you gave the left enough rope it would hang itself.

However, Peterson did not seem to grasp Zizek’s own criticism of the PC left. And this failure made for a skewered debate, one that at times felt sluggish and awkward, because its protagonists appeared to be having different arguments. Indeed, despite the year-long lead-up, one could be forgiven for wondering if they had done any prior planning.

The besuited Peterson started off the debate, pacing in front of a packed crowd at the Sony Centre, with a critique of The Communist Manifesto, which he then admitted to having reread for the first time in decades.

‘I have to tell you, and I’m not trying to be flippant here… I have rarely read a tract that made as many conceptual errors per sentence as The Communist Manifesto‘, he gloated, before going on to disregard out of hand a book that changed the course of human history. His main argument – which was essentially Nietzschean – was that the meekness of the poor does not in itself prove the inherent evil of the rich. ‘It’s absolutely foolish that you can make an assumption about someone’s moral worth by their economic standing’, he said. This led him to outline support for the trickle-down effect, in which wealth filters through society from the top downwards, while also arguing that there is something inherently life-affirmative in competition. His argument, which borrows from Jungian psychology and evolutionary theory, is that social stratification is inherent to lived existence, and that its circumvention denies what it is to be human.

Wearing a casual pullover and slacks, Zizek responded, while still sitting down and reading from a familiar run of copy-and-pasted jokes, sketches and theories from a sheet of paper. The mood in the viewing party on Zero Books’ discord server – a kind of instant chat with voice function – was at this point subdued. The overwhelmingly pro-Zizek crowd feared that their man was at risk of appearing overly convoluted. ‘He is going to have to make his point soon’, stated publisher and Zizek supporter Douglas Lain, wearily. That point finally came, as Zizek stated that the most shining example of trickle-down economics has taken place in China, a country with high levels of state control over business. This, coupled with an argument that capitalism is detrimental to the environment, appeared, in essence, to be a rebuttal of Peterson’s dismissal of communism, even though it raised more questions than it resolved. Not least: what about China’s poor environmental record? Isn’t China effectively a totalitarian-capitalist state? Perhaps realising this, Zizek pedalled back immediately after his contribution, stating, ‘When I mentioned China, I didn’t mean to celebrate it. It worries me terribly. My god, is this our future?’

Responding to Zizek’s overall opening statement, Peterson said: ‘I heard a criticism of capitalism, but no real support of Marxism… I would say Dr Zizek probably focused more on the problems of capitalism and the problems of happiness, than on the utility of Marxism.’ Peterson admitted that this had wrongfooted him, as he had assumed they were debating Marx, hence his intro around The Communist Manifesto. This is where it became apparent that Peterson was taking on Zizek on a basis that maybe didn’t exist — namely, the latter’s supposedly avowed traditional Marxist position. Meanwhile, Zizek had cooked up an argument entirely from disassociated prior arguments: a Lacanian-Hegelian-Marxist copypasta.

In a bid to save what at this point seemed farcical, Peterson agreed that capitalism is bad, with the proviso – appropriated from the currently deeply unfashionable Churchill – that it was the least bad of all economic systems known to us. From there he inadvertently made a left-accelerationist argument, that the speeding of capital, and the development of productive forces, may push us through to an era of sustainable growth — itself based on the Marxist principle that by hijacking the productive potential of capital, the worker might utilise it to make a more equal world. Rather than equality, however, Peterson focused on free-market capitalism’s ability to make people less miserable by making them wealthier overall.

Finally, Peterson argued that what prevents capitalist society becoming basically nihilistic in its pursuit of wealth is individual self-responsibility based on the principle of doing unto others as you would wish done unto you. Zizek’s retort was that happiness is so relative as to be a contingent element in any political system, and that individual interest is not enough to solve, for example, the problem of polluted oceans.

With such a divergence not only of ideas but also of the terrain on which they were arguing, it became apparent that consensus between Zizek and Peterson would not be reached on any political or philosophical level. However, as time went on, the body language and tone of the two academics softened, with Zizek at points appearing like a mentor to the younger Peterson. Zizek, known for his adversarial and jokey style of address, sought to bring together the factions in the audience by pointing to the seriousness of the problems that face us today, principal among them being climate change, he claimed. Meanwhile, Peterson, who has honed a kind of stern, father-like persona on YouTube, appeared captivated by Zizek’s genteel charisma, at points openly smiling as he watched and listened to Zizek.

Talk in online chatrooms inevitably revolved around Peterson being ‘owned’ or ‘cucked’. However, this was not a position Zizek, settling into his role as benevolent uncle to Peterson, would have countenanced. For all its problems, the debate was saved from disaster by the humility and humanity of the philosophical fathers of the online left and right. As Peterson said in his closing lines, ‘people of goodwill, despite their differences, can communicate and can come out of that communication improved’. Here’s hoping the online left and right follow the example.

Mike Watson is an art theorist and curator. He is the author of Towards a Conceptual Militancy, published by Zero Books. (Buy this book from Amazon(UK).) His new book, Can The Left Learn to Meme?: Adorno, Video Gaming, and Stranger Things, will be published later this year.