There is nothing progressive in green calls to overthrow capitalism. 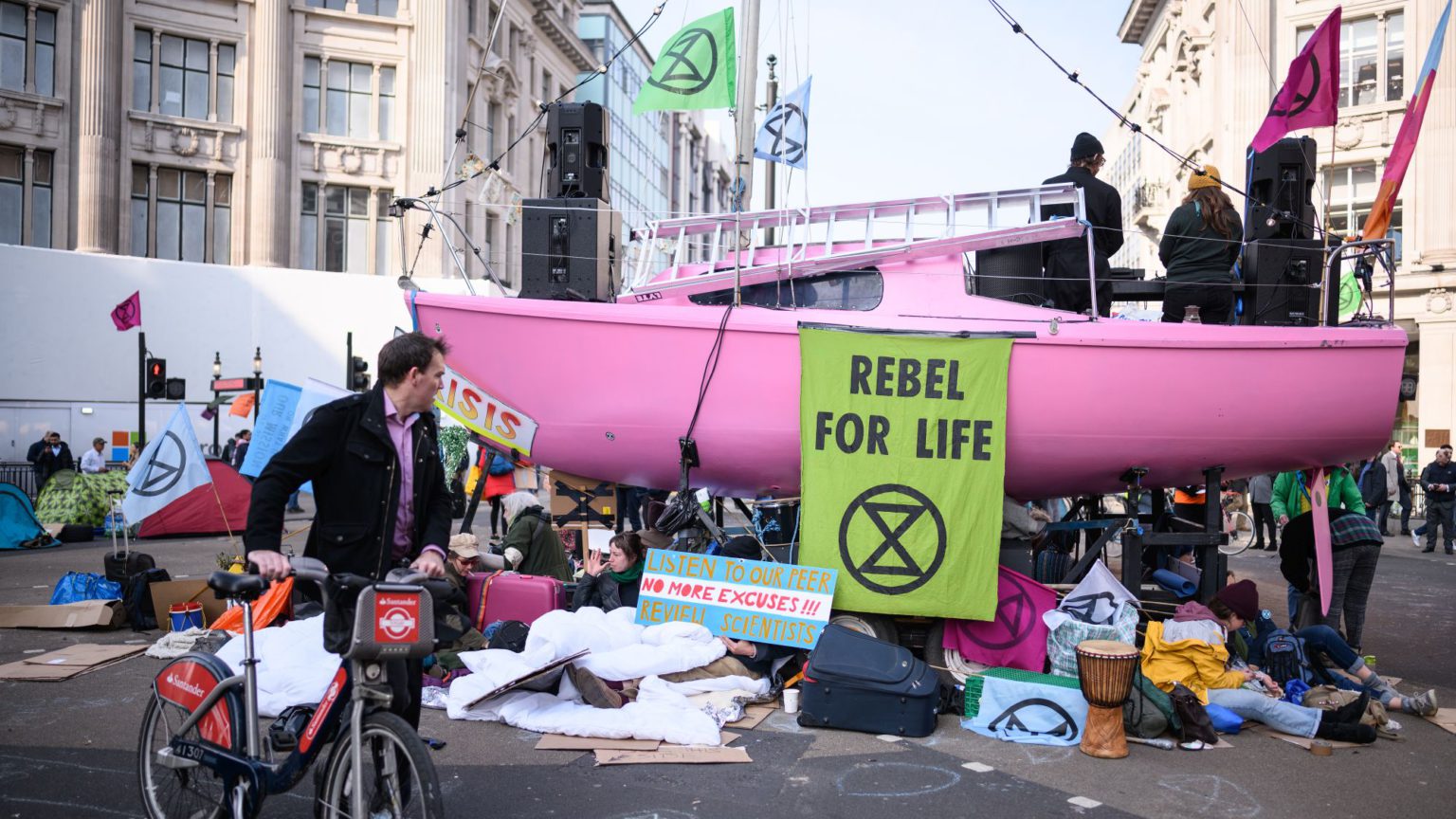 Climate protesters Extinction Rebellion have spent the week blocking London’s roads, staging die-ins, glueing themselves to trains, climbing on top of buses, and even chaining themselves to Labour leader Jeremy Corbyn’s house. The activists’ aim is to cause maximum disruption and get themselves arrested to draw attention to climate change. Protest leaders claim that humanity faces extinction unless carbon emissions are cut to net zero by 2025.

They have compared themselves to Gandhi and Martin Luther King. A BBC podcast asks if Extinction Rebellion are ‘the new Suffragettes’. They have been endorsed by many on the radical left who have persuaded themselves that a serious rebellion is afoot.

Last week, left-wing new media outlet Novara Media posted on social media a video of veteran eco-warrior George Monbiot. In it, Monbiot calls for an end to green tinkering and the ‘micro-consumerist bollocks’ of sustainable cotton buds, etc. Instead, he says, ‘we need to get to the heart of capitalism and overthrow it’. The audience cheered and the clip went viral, with over one million views. James Corden from Gavin and Stacey retweeted it. Leftists tweeted excitedly about a decisive and radical shift in the ‘Overton Window’ in favour of abolishing capitalism.

Traditionally, the left would campaign in favour of human progress, more wealth, with a greater share of that wealth going to ordinary working-class people. Novara Media’s organising principle of ‘Fully Automated Luxury Communism’ nods to this aspiration. In Marxist terms, capitalism would come to be replaced with a communist society of abundance for all.

But strip away the pseudo-radical talk of rebellion and revolt and it becomes clear that neither Extinction Rebellion nor Monbiot’s eccentric ramblings should be talked about as a serious left challenge to capitalism. It is not a call to ditch capitalism in favour of a new system that could provide abundance for all. On the contrary, the environmental critique of capitalism is that we have too much stuff, too much wealth, and we should now return to a pre-industrial feudalistic state.

For instance, in that viral clip, two of the things Monbiot told us to give up are meat and air travel. Flight, the ability to traverse continents in ever shorter periods of time, is surely one of the greatest gains of modern times. For several hundred pounds, you can travel to the other side of the world. For less than £100, you can travel to practically any nation in Europe. Similarly, the abundance of food that the developed world is able to enjoy is a triumph of modernity. Developments in modern farming, packaging and transport mean that meat no longer has to be rationed. Even the poorest people in the West can enjoy a meat-based diet in a way that would have only been possible for aristocrats less than a century ago. According to environmentalists, this progress is a very bad thing.

The environmental attack on increased living standards for the poor is often explicit. Back in 2007, annoyed that teenagers ‘in one of the poorest parts of Britain’ could afford ‘expensive haircuts, fashionable clothes and mobile phones’, Monbiot concluded in a Guardian column that rich nations have reached the logical place to stop growing. Not only that, but they should start shrinking and become poorer. ‘Bring on the recession’ was the headline he chose when he republished the article on his website.

In his 2007 book Heat, Monbiot described environmentalism as ‘a campaign not for abundance but austerity, not for more freedom but less… It is a campaign not just against other people, but against ourselves.’

Many observers have noted the overwhelmingly white and middle-class composition of the Extinction Rebellion protests. Unsurprisingly, few working-class people are likely to share the environmentalists’ belief that we are all too wealthy and should embrace restraint, rationing and recession.

Where calls to overthrow capitalism were once made in the name of abolishing human misery, today’s anti-capitalists make clear that their goal is to promote human misery. Capitalism may be exploitative and unequal, but the new anti-capitalism is downright anti-human.