‘The EU is an empire’

Wolfgang Streeck on why the EU is a deplorable institution that we must leave. 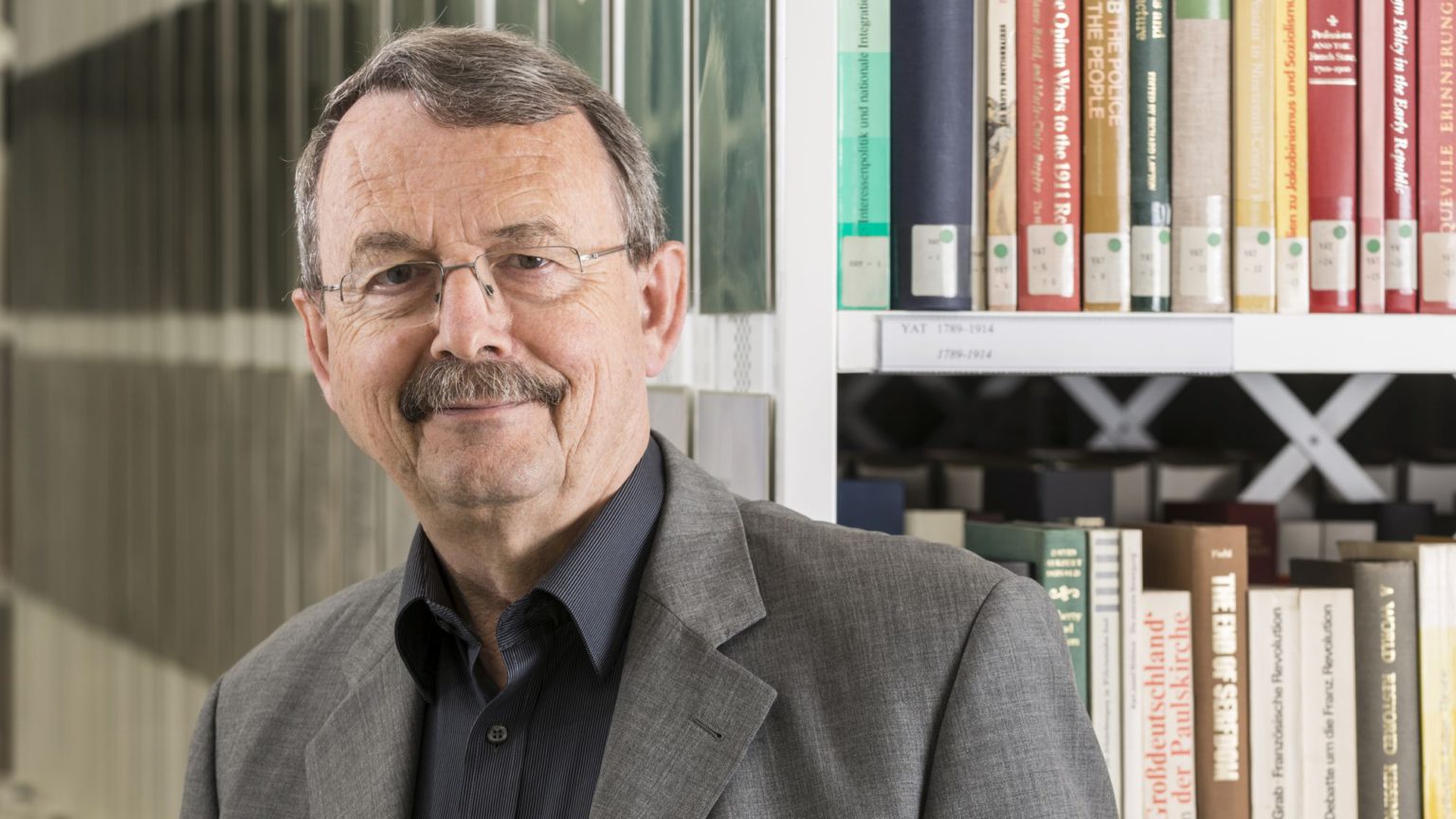 Two years have passed since the government triggered the Article 50 process. By now, Britain should be out of the EU. But beyond the prime minister’s capitulation to Brussels in the exit negotiations, and parliament’s disdain for the referendum result, are their deeper, structural reasons why leaving the EU has proven so difficult? For economic sociologist Professor Wolfgang Streeck, the EU is a ‘liberal empire’. Streeck is emeritus director of the Max Planck Institute for the Study of Societies in Germany. spiked caught up with him for a chat.

spiked: How has the role and focus of the EU evolved over the past few decades?

Wolfgang Streeck: Originally, the EU was an organisation for joint economic planning among six adjacent countries. The planning was sectorally specific, limited to coalmining and the steel industry, later also nuclear power, in the context of the state-managed capitalism of the postwar era. Then it grew into a free-trade zone, increasingly devoted to spreading neoliberal internationalism, in particular the free movement of goods, services, capital and labour, under the rubric of the Internal Market.

As the number and heterogeneity of member states continuously increased, ‘positive integration’ became ever-more difficult. Instead, there was ‘negative’ integration: the removal of substantive regulations that impeded free trade within the bloc. After the end of Communism in 1989, the EU became a geostrategic project, closely intertwined with the US’s geostrategy in relation to Russia. From the original six countries cooperating in the management of a few key sectors of their economies, the EU became a neoliberal empire of 28 highly heterogeneous states. The idea was and is to govern those states centrally by obliging them to refrain from state intervention in their economies.

spiked: Is the EU reformable?

Streeck: The EU’s de facto constitution consists of the Treaty of European Union, which is practically impossible to revise, and the rulings of the Court of Justice of the European Union, which only the court itself can revise. The neoliberal core of the EU as an institution and the results of European integration were intended by its framers to be eternal and irreversible. This is shown by the hard opposition in Brussels to a British exit, and in the intention to make that exit as unpleasant as possible.

It is also, and perhaps more importantly, visible in the inability of EU institutions to respond constructively to claims for more national autonomy, as expressed by various ‘populist’ countermovements. These movements are now blocking the process of European integration and there is a large risk that the insistence of Berlin, Paris and Brussels on prolonging and extending the established European institutions will lead to serious conflict between European nations, such as we have not seen since 1945.

spiked: Why is opposition to the EU seen as immoral?

Streeck: Very simply, I think that the neoliberal and geostrategic nature of the post-1990 EU would not be capable of generating anything like the legitimacy needed for a political regime to be viable. All sorts of sentimental narratives had to be invented to make people forget the disempowerment of national democratic politics that is at the core of the EU construction.

Today, the left-liberal ideal of internationalism has been hijacked by neoliberal anti-statism, and international solidarity is identified with free markets. This is purely ideological, and it doesn’t speak well for the political acuity of the left middle-class that it bought the ‘Third Way’ version of international peace and friendship. Nowhere in the history of socialism, for example, can we find the idea that workers are morally obliged to let themselves be competed out of their jobs by workers in a country where wages are lower. Rather, solidarity always meant that workers cooperate, in the sense of organising together, to protect themselves against being played against one another by employers.

Then there is the European Monetary Union, which acts like an international gold-standard regime. The gold standard has been known since the 1930s to be incompatible with democracy and international peace. It puts governments against people and peoples against each other in competition for international markets. EU propaganda enlists people’s desire for peace and friendship to rob them of their most important institutional heritage: the nation state. The nation state is the only site of a politics amenable to anything like a redistributive state or an egalitarian democracy.

spiked: Why has the left become so attached to the EU?

Streeck: I wish I knew. Maybe because they confuse the EU with Europe? The EU is a deplorably undemocratic institutional construct that is so complex that you cannot understand how it works without extensive investigation – and even then you may not quite grasp what it is about. This means that you can read almost anything into it. You can identify it with personal dreams of a world that is free from historical burdens. Or you can see it as the embodiment of a pleasant consumerist lifestyle: rights without obligations, free travel, no taxes, immigrant labour, an international labour market for English-speaking university graduates. ‘Europe’ is your oyster: a playground for the new middle-class, the bobos, as the French call them: the bourgeois bohemians, the self-appointed cosmopolitans who believe that by importing cheap labour for their households they are doing something for the progress of mankind.

Many people today want to leave their national historical baggage behind. To many British citizens, the UK means colonialism. They seem to believe that ‘Europe’ never had colonies, so they want to be ‘Europeans’ rather than ‘little Englanders’. This is even worse in Germany, for understandable reasons. If you are abroad, anywhere in the world, and you meet someone who says they are ‘from Europe’, you can be sure they are from Germany.

spiked: To what extent does the EU resemble an empire?

Streeck: The EU has a centre and a periphery, with a steep gradient of power between the former and the latter. The centre imposes and enforces its political and economic order on the periphery, in the form of the common currency, the ‘four freedoms’ of the common market, and a general requirement of adherence to ‘European values’.

Moreover, compliance is rewarded by fiscal transfers, in particular, the structural and social funds. The centre – it is still an open question as to whether this is Germany alone or Germany and France – offers military protection to countries on the periphery in return for imperial loyalty. (See Poland and the Baltic states, in particular.)

Peripheral countries that do not follow the rules, such as Greece under the SYRIZA government, are punished by central institutions like the European Central Bank, while central countries like France are exempt from punishment. Sometimes wayward governments in peripheral member states are replaced by the centre with imperial governors, as happened with the replacement of Silvio Berlusconi by Mario Monti in Italy, or of George Papandreou by Lucas Papademos in Greece. And exit from the empire is, while possible, made as difficult as possible, in order to prevent peripheral countries negotiating terms of membership more suited to their particular situation.

spiked: If Britain ever leaves the EU, could it ever make a success of Brexit?

Streeck: That depends what you mean by success. Let me focus on the British left, which seems overwhelmingly to be in favour of Remain. To me, there is no left in Europe and the United States that is more demoralised and defeatist than the pro-EU left in the UK. The main reason why they find EU membership indispensable is that they are afraid that without it, the Conservatives will take over the country forever and remove even the minimal – absolutely minimal – protections for workers that they have to uphold under the Maastricht Treaty. In other words, they believe they will be unable to defend even the puny minimum standards granted to them by Brussels.

The same is true for regional policy, which in Britain is largely funded by EU handouts. Although regional disparities in Britain remain dramatic – worse than in most European countries, except for Italy – the pro-EU left is urging people to be grateful for the blessings dispersed from the European structural funds. The assumption appears to be that if European pacifiers of this sort are removed, the left and those it is supposed to represent will do nothing, remain seated, safety belts fastened, and suffer in silence. I do not share that view.

The British pro-EU left has, for fear of Thatcher and her current and future acolytes, sold its anti-capitalist birthright for the thin gruel of a European minimum entitlement to a few days of parental leave. People can ask for more, as they have successfully done in all other rich European countries. But the right tells them that these measures would mean less employment – and they seem to believe it! Britain is one of the richest countries in the world. But the left has been persuaded that it requires European tax money to have a regional policy, even though this has made no difference at all to regional inequality.

With the European anaesthetics withdrawn, workers and voters might remember the British tradition of powerful trade unions and a universal welfare state, get together again, strike for better employment conditions, and elect a Labour government worthy of that name. If this could be the result of Brexit, would it not be worth at least trying to ‘take back control’?