The emasculation of Brexit

In voting against No Deal, MPs have devastated the 2016 vote for greater democratic control. 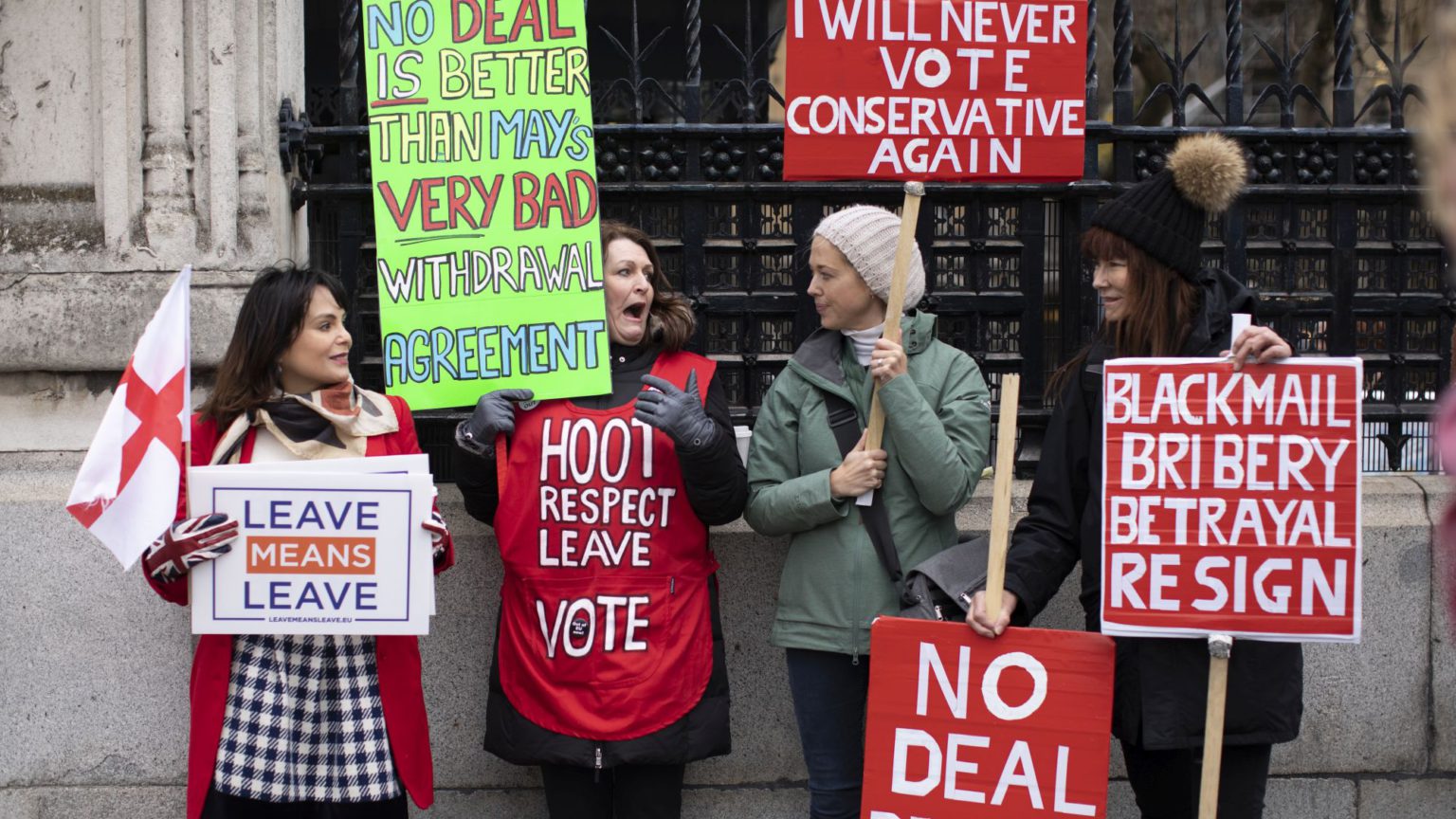 It isn’t surprising that, this evening, MPs voted down the possibility of a No Deal Brexit, twice, first by embracing the Spelman amendment against No Deal and then by voting against Theresa May’s bizarre whipped attempt to keep No Deal in the mix — they rejected that by 321 to 278 votes. But it is nonetheless shocking.

It isn’t surprising because the vast bulk of the political class has been whipping up panic about No Deal for months, hysterically talking about it as a 21st-century apocalypse that will plunge Britain into a Cormac McCarthy-style dystopian nightmare in which cheese will run out, the whole country will be criss-crossed by traffic jams, and there will be a devastating outbreak of ‘super-gonorrhoea’ (Evening Standard). But it is still shocking because it is just so craven. It represents the political elite’s fullest effort yet to emasculate the Brexit process and to lay themselves – and by extension the UK – at the mercy of the Brussels bureaucracy. It is their clearest snub yet, among many snubs, to the spirit of the vote for Brexit – the desire to take back democratic control.

The vote against No Deal may have been smaller than expected. But right now, nothing better captures the aloofness and hollowness of the British establishment than their hissy-fitting over No Deal. They talk about No Deal in the way politicos used to talk about MAD (mutually assured destruction) in the Cold War 1980s. Indeed, the film about nuclear war that us 80s kids watched at school – The Day After – could easily be refashioned into Remoaner propaganda about ‘the day after’ No Deal. It’s all there: disease, hunger, the descent into communal savagery. Sadly for the Project Fear machine, many of us remember unhinged panics from the past and that has built up our immunity to this blackmail style of politics that essentially says: ‘Do as we say or you will suffer terribly.’ And yet, exactly as the establishment loses its head over No Deal, the public warms to it. A ComRes poll at the weekend found that 44 per cent of the public favours leaving with no deal if Brussels makes no further concessions. That’s a six-point rise from January. Deltapoll has found that the things voters believe are ‘needed to honour the referendum’ amount to what the political class refers to as a ‘Hard Brexit’.

It is so striking: ‘Hard Brexit’ and ‘No Deal’ are bogey-words within elite political circles – including, in fact especially, among Corbynista cliques – and yet these are seen as decent, even desirable political positions by significant sections of the public. Say No Deal in Islington and watch people wail and boo; say it in Stoke and you’ll have a lot of people saying: ‘Yes, let’s do that.’ The No Deal divide captures the Two Britains phenomenon: on one side the Britain of the well-connected and right-on, who see life outside of Brussels’ purview as virtually impossible, and on the other the Britain of ordinary people who consider that democracy is the greatest guard against abuse by either foreign technocrats or domestic lawmakers. But as well as speaking to the gaping moral and political chasm between Them and Us, today’s vote against No Deal is a form of political suicide, a crystal-clear indicator that our political class has utterly given up on even negotiating with the EU, never mind being faithful to the vote of June 2016.

Taking No Deal off the table is the end of the Brexit negotiations. For the simple reason that you cannot negotiate in a serious, grown-up, meaningful way if you do not reserve the option of walking away – or ‘crashing out’, to use another phrase that strikes fear into the heart of the establishment and a nod of approval from much of the public. The establishment is making itself subservient to the EU. That is the signal sent by this. No Deal may have been turned into a political swearword in recent months, but in truth it was always an incredibly honourable position. It was the UK saying to the EU: ‘We value the vote of June 2016 so much that we are willing to walk away if the thing you offer us doesn’t measure up to it.’ Now, with the obliteration of No Deal, many MPs have made clear what we all knew to be the case – that they do not value the vote of June 2016. These anti-No Dealers have now signalled, openly and frankly, their disdain for the thing that we the people want: democratic control over political negotiations, over treaties, over trade, over our borders. This is the divide that will define Britain for decades – that between an establishment that despises the burdens of democratic governance, and ordinary people who know that democratic governance is a people’s best protection against tyranny and abuse.