Recycling in a country like ours is inefficient, expensive and pointless. 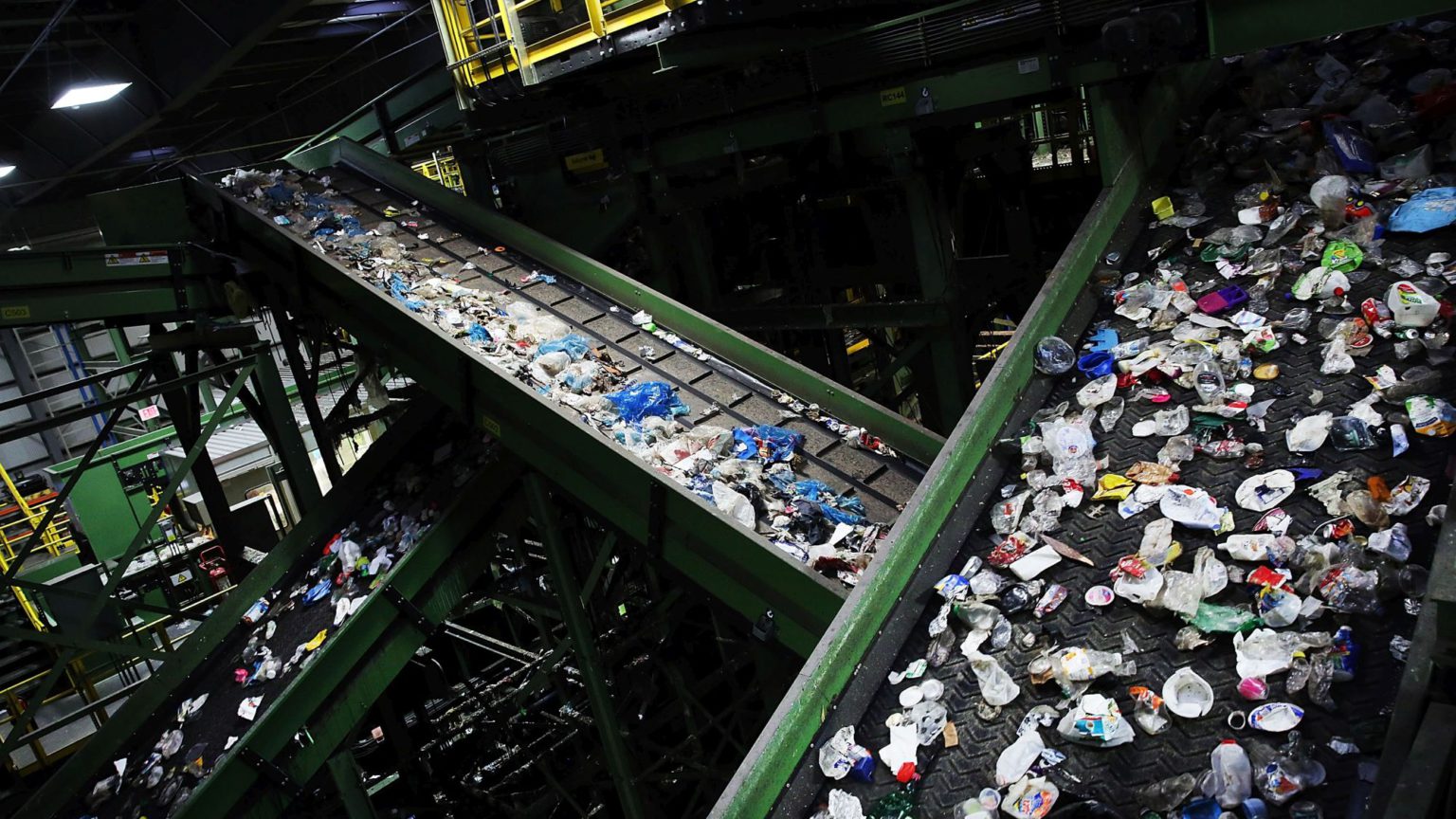 When a brave Queensland council decided to cut costs by dumping the contents of kerbside recycling bins into the local tip, they hit a raw public nerve.

In a matter of weeks, Ipswich Council was forced to reverse the decision, hiring a contractor to sort through tons of assorted pizza boxes, plastic tubs and beer bottles in the hope that some of it might be born anew.

Good luck. The market for theoretically recyclable material in domestic waste has hit rock bottom, and is unlikely to recover.

The truth, barely uttered outside the corridors of the waste-management bureaucracy, is that household-waste recycling is public-policy rubbish. It would not exist without subsidies, rarely explicit, for which the punters ultimately pay either in taxes or increased manufacturing and distribution costs which are passed on to the consumer.

Australia’s only plastic-recycling plant was driven out of business two years ago by the price of electricity. China, which once imported shiploads of waste plastic from Australia, has put a stop to the trade.

Bales of stockpiled plastic piled up in local recycling depots have become hazardous. Fires have broken out in Sydney and Melbourne which spread toxic fumes, prompting the evacuation of neighbouring suburbs.

The price of domestic secondhand paper has fallen to zero. Manufacturers of recyclable paper prefer to source their raw material from industrial offcuts, which does not have to be sorted from mixed recycling bins and washed clean of congealed mozzarella and olives before it can be pulped.

There is weak demand for recyclable glass. Its weight and the labour-intensive task of separating coloured bottles make it largely uneconomic. Most glass in mixed recycling bins is crushed and poured into landfill or channeled into low-value use like road construction.

Aluminium cans at least have value and can be recycled at considerably less cost than smelting raw bauxite. The revenue, however, hardly offsets the overall losses of the recycling indulgence.

Tracing causes and symptoms of the nation’s compulsive recycling disorder takes us to the essence of the zeitgeist of modern Australian life.

For the first 180 years of western settlement, the spirit of progress prevailed, inspiring pioneering settlers to tame the wilderness and extract the continent’s hidden wealth.

Progress became a powerful driving narrative, inspiring innovation, enterprise and toil to the benefit not just of Australians, but also the rest of mankind.

Progress in the transportation of frozen meat and improved methods for wheat cultivation, for example, contributed to radical improvement in the British working-class diet in the late 19th century.

Progress in the breeding of sheep and the invention of more efficient ways to shear their fleeces and transport them to Yorkshire mills made finer clothes affordable to the common man or woman.

Progress in mining meant that bulk quantities of iron ore and metallurgical coal could be shipped cheaply to China, India and Korea, fuelling the Asian miracle that has lifted hundreds of millions out of poverty while producing cheaper cars and fridges for Australian consumers.

The cultural breeze turned dramatically in the late 1960s, as the spirit of progress was challenged by the spirit of sustainability.

A contemporary social observer noted the first nervous twitches of ecological catastrophism in the early 1970s. The heroism of taming the environment gave way to the shame of its despoilment.

‘Some talk and behave as if the breakdown of the system has occurred; “Very shortly the corner store mightn’t have any milk”’, wrote Frank Moorhouse.

The sudden shift from a world of abundance to a world of finite resources is apparent from the cultural anxieties of the time, many of which have been conveniently forgotten. The Middle East oil crisis of 1973 led to the mistaken notion of ‘peak oil’. United Nations-sponsored conferences promoted a neo-Malthusian fear that finite farming-land and a growing population would lead to widespread starvation.

It is probable that today’s planetary anxieties will seem equally as curious in 50 years time.

Future social historians might wonder, for example, why their forebears developed a phobia of plastic, an inert material that is cheap to produce and has transformed modern life in largely positive ways.

Plastic is uncommonly resource-efficient. Its high strength-to-weight ratio, stiffness and toughness, resistance to corrosion, bio-inertness, non-toxicity and exceptional durability have made significant improvements to modern life.

Plastic wrapping has contributed to better food preservation and hygiene. It has reduced the amount of food waste, improved shelf-life, made fresh goods cheaper, more available and more nutritious, reduced transport costs and, if we must, shrunk the carbon footprint of the food-distribution chain.

Yet today we fret about single-use plastic bags and plastic straws in a deeply irrational way. Their elimination has become part of the creed of sustainability; it would be heresy to argue that the plastic bag is actually the landfill manager’s friend, containing messy household waste and stabilising tips. Their contribution to the volume of landfill is so small it barely registers.

Yet governments around the world have banned them, and having done so, have their sights on the humble plastic straw.

Waste management has joined the growing suite of public policy justified purely by the warm inner glow. If it feels right, it must be right.

In the current climate, it is little use arguing that present anxieties about plastic marine pollution are exaggerated and misplaced.

The UN Environment Programme (UNEP) claims that ‘51 trillion micro-plastic particles – 500 times more than stars in our galaxy – litter the seas’, costing ‘at least $8 billion in damage to marine ecosystems’.

‘According to estimates’, UNEP says without so much as a footnote, ‘by 2050, oceans will have more plastic than fish if present trends are not arrested’.

Common sense tells us these are guesstimates at best, hunches dressed up as facts to give coherence to an irrational fear of modernity.

It is unlikely that banning plastic straws and single-use bags will make a noticeable difference to the amount of plastic in the ocean. Australian government estimates suggest that only two per cent of single-use plastic bags end up as litter, and only a quarter of those make their way to the sea.

Plastic bags and other plastic wrapping accounted for less than one in 20 items of plastic waste collected from Australian beaches.

On a global scale, the impact of Australian plastic waste is insignificant. A study published in ­Science in 2015 found that more than a quarter of the 12.7 million tonnes of plastic washed into the ocean comes from China. Australia contributed less than 0.08 per cent in 2010.

Almost all the waste found in the ocean is heavy-duty industrial or marine plastic. Light-weight plastic packaging is broken down before it drifts far offshore.

It is a brave politician who is prepared to resist the tide of moral panic, however. Which is why governments, state and local officials pander to our phobia of putting anything in landfill and are reluctant to tell us the facts.

Fears that a country as large as Australia, with its long history of quarrying, might be running out of landfill sites is ridiculous. Landfill is largely managed by large specialist companies who have become skilled at exceeding environmental regulatory requirements.

Well over 50 per cent of waste is recycled, principally building material and other industrial waste. Domestic waste makes up less than a third of the waste in the system, and 60 per cent of it is organic material from food (40 per cent) and garden waste (20 per cent).

The Federal Government Productivity Commission found that the cost of separating out theoretically recyclable material exceeded the benefits.

Arguments for kerbside recycling rely on upstream external benefits, like the avoidance of litter.

The commission argues that the case for phasing out plastic retail carrier bags based on the litter argument is flimsy.

The policies would penalise all users of plastic retail carrier bags, whereas the potential benefit would only come from the small proportion of bags that are littered. A more cost-effective approach would be to target littering directly.

Sustainability in the end is best managed by markets. Scarce commodities rise in price, increasing incentives for innovation and search for alternatives.

Instead of trusting governments, we should trust ourselves, confident that human ingenuity, the world’s greatest renewable resource, will solve whatever problems we now perceive as threatening.

Nick Cater is director of the Menzies Research Centre and a columnist for the Australian.