Would Rosa Luxemburg have been for Brexit?

Red Rosa once called the idea of a European Union an ‘imperialist abortion’. 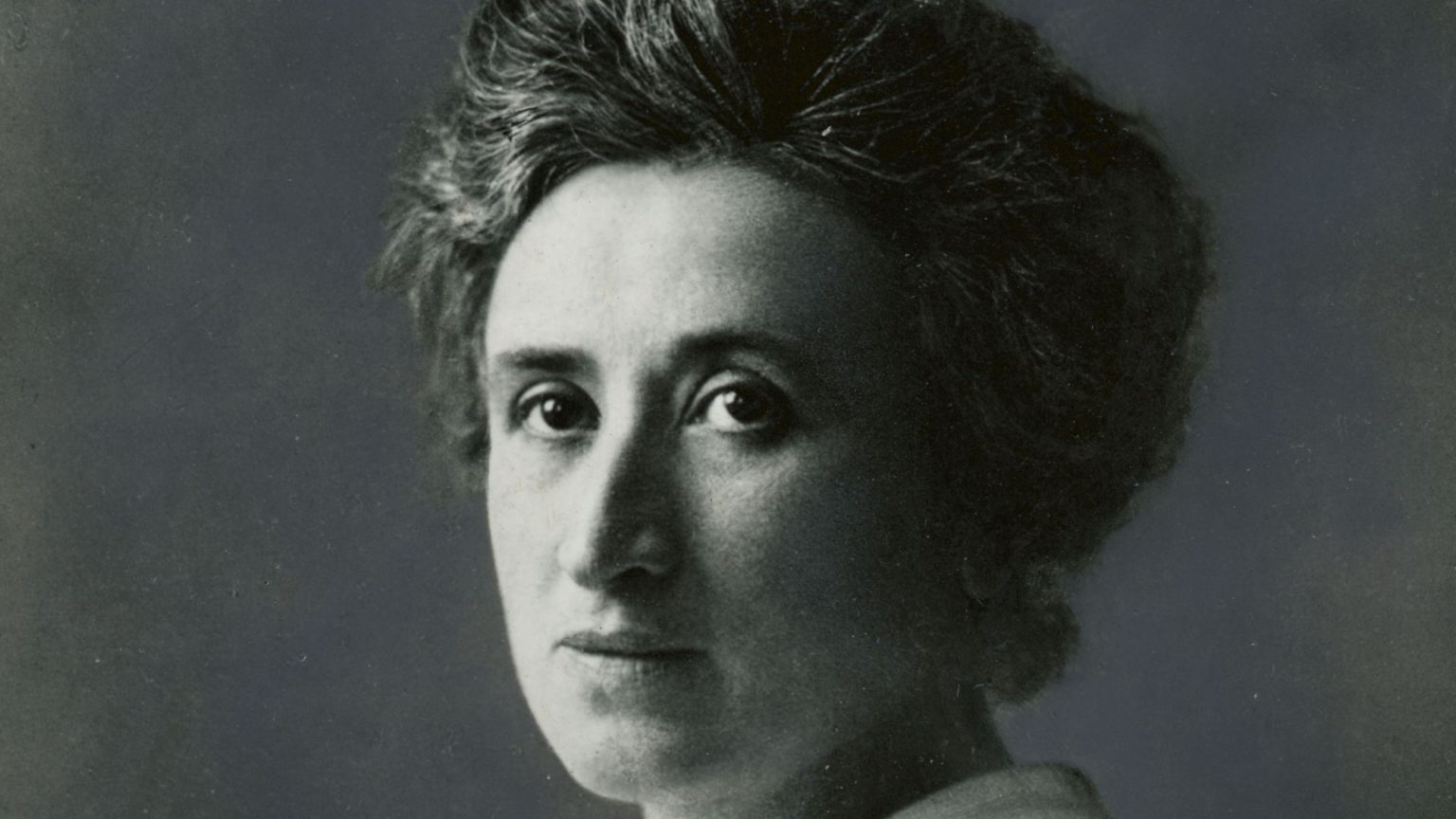 One hundred years ago this month, on 15 January 1919, the revolutionary Rosa Luxemburg and her comrade Karl Liebknecht were murdered in Berlin by thugs of the proto-Nazi Freikorps, on the orders of Germany’s Social Democratic Party government ministers, amid the political tumult that followed the First World War.

Maybe, we thought, reminding spiked readers about ‘Red Rosa’ and her legacy might make a break from writing and reading about Brexit this week. Yet as soon as you start thinking about Luxemburg – something I had not really done for decades – one striking thought is her relevance to current battles over Brexit and democracy in Europe.

First, a (very) potted biography. Rosa Luxemburg was born in 1871, the fifth child of a Jewish family in Russian-ruled Poland, where, as a child, she witnessed anti-Semitic pogroms. After becoming one of the few women to gain a doctorate from the University of Zurich in Switzerland, she moved to Germany in 1897 to join the Social Democrats, Europe’s most powerful left-wing party.

The publication of her famous pamphlet, Reform or Revolution (1898), made Luxemburg a leading critic of the more conservative, constitutional wing of the SPD led by Eduard Bernstein. Imprisoned twice in the early 20th century, Luxemburg’s focus became opposing preparations for war between the Great Powers. Her resolution demanding that Europe’s left parties unite to stop the war was accepted by the congress of socialist parties, the Second International.

Yet when the First World War broke out in 1914, the International collapsed as the social democratic parties of Western Europe – including the German SPD and the British Labour Party – backed the war policies of their respective national governments.

Luxemburg declared that, ‘Since 4 August 1914, German Social Democracy has been a stinking corpse’. As the corpses piled up in the trenches she agitated against the slaughter, warning that Europe faced a choice between ‘Socialism or Barbarism’. Luxemburg and Liebknecht split with the SPD and formed the Spartacus League in 1916. For her courageous stand she was imprisoned for a year by the Kaiser’s war government.

The First World War was brought to an abrupt end by the attempted German Revolution of November 1918. In the political ferment that followed, the Spartacists staged an uprising in Berlin in January 1919 (Luxemburg thought it a mistake). The Social Democrat government of Friedrich Ebert sent the Freikorps militia of right-wing army veterans to crush the revolt. They captured Luxemburg, tortured and murdered her, and threw her body into the Landwehr Canal. Liebknecht was also executed. The Nazis later incorporated the Freikorps unit responsible into their SA Brownshirts.

What might Rosa Luxemburg’s century-old struggles and debates say to us in the changed-beyond-recognition political landscape of today? It is surely worth remembering her condemnation of German – and by extension British – social democracy over their support for the First World War, and that SPD ministers sent the proto-Nazis who killed her. More than a century later, the SPD and the Labour Party still proudly claim the mantle of their ‘stinking corpse’ ancestors.

Remembering Rosa in the age of Brexit can also lead back briefly to two often-cited (and misinterpreted) debates she had with Lenin, leader of the Bolshevik revolution in Russia: one over the right of nations to self-determination, the other about democracy.

(Despite their disagreements, Lenin defended Luxemburg as a hero and ‘an eagle’ after her murder. When Stalin later attacked Luxemburg, Leon Trotsky took apart the dictator’s distortions, ‘to shield Rosa’s memory from Stalin’s calumny… and to pass on this truly beautiful, heroic, and tragic image to the young generations of the proletariat in all its grandeur and inspirational force’.)

At the time of the First World War, Polish-born Luxemburg disagreed with Lenin and the Bolsheviks over their support for the right of nations to self-determination – in particular, the demand for Polish independence from the Russian empire. Luxemburg asserted that only right-wing Polish nationalists would benefit from this demand, and that in any case political independence was irrelevant since a small nation such as Poland would remain economically subjugated. Instead, she argued, the left should sidestep the national question and fight directly for socialism.

In response, Lenin demonstrated that the political struggle for the right to national independence and sovereignty was a vital part of the wider social struggle for liberty and equality. And playing a leading part in upholding that right, even alongside reactionary nationalists, was crucial if the left hoped to win support for change. In practice, he pointed out, Luxemburg’s ‘socialist’ argument would mean dodging the anti-colonial struggle to break up Europe’s empires.

Today in the UK, we might detect bastardised echoes of Luxemburg’s case from many on the Labour left. Ignoring the anti-EU traditions of their British forebears such as Tony Benn, these socialists insist that trying to uphold national sovereignty through Brexit is a ‘far right’ or ‘Tory’ project that the left should oppose. Instead they want to remain in the European Union in order to ‘fight international capitalism’.

Yet upholding national sovereignty and democracy through Brexit is the most radical demand in British politics – and one anybody with a left-democrat bone in their body should wholeheartedly support. Despite the left’s ridiculous notion that the vote to leave represents a form of ‘imperial nostalgia’, it is those who want to subjugate the nation state to the EU who represent the real empire-builders today. And the sub-Luxemburg leftists are at best dodging that battle by refusing to fight for Brexit.

That brings us to Luxemburg’s other famous apparent fallout with Lenin, over the issues of freedom and democracy in Soviet society shortly after the Russian Revolution. While imprisoned by the Kaiser’s regime in 1918, Luxemburg wrote from her cell to criticise the emergency measures imposed in Russia by the new Bolshevik government. These included postponing elections and restricting freedom of political parties and of the press.

Luxemburg saw such repressive measures as a betrayal of the democratic revolution which had overthrown the Russian tsar. ‘Without general elections’, she wrote, ‘without unrestricted freedom of press and assembly, without a free struggle of opinion, life dies out in every public institution, becomes a mere semblance of life, in which only the bureaucracy remains as the active element’. Then she gave a famous defence of universal democracy:

‘Freedom only for the supporters of the government, only for the members of one party – however numerous they may be – is no freedom at all. Freedom is always and exclusively freedom for the one who thinks differently.’

In response, the Bolsheviks argued that Luxemburg was seeking to apply a general, abstract law of politics divorced from the concrete historical context in which the new Soviet state found itself. That context was a bitter civil war in which the ‘White’ Russian forces had launched a brutal attempt to re-establish the oppressive old order, and the Western powers were preparing to send in a dozen imperial armies to support their counterrevolution. It was this desperate situation, Lenin insisted, that justified the imposition of emergency repressive measures as necessary to defend the popular revolution.

In the end, of course, the isolation of the Soviet state led to the defeat of the proletarian revolution and the rise under Stalin of the unrepresentative bureaucracy Luxemburg had feared. Luxemburg herself, an admirer of Lenin’s Bolsheviks, always acknowledged that their biggest problem was the failure of a revolutionary Germany to come to their aid.

Whatever view anybody might take today of such distant, dusty debates, in the very different context of now, Luxemburg’s words are well worth reviving. The assumption that freedom of speech should be defended only for those who agree with you – a notion of which Stalin himself would have approved – now runs through every debate from the campus to the Commons. Similarly, the arrogant belief that democracy is only important if it gives the ‘right’ result for your side, and that some voters are effectively more equal than others, underpins every aspect of the elites’ backlash against the mass vote for Brexit.

If we want to live in a free and democratic society, Rosa’s insistence that ‘Freedom is always and exclusively freedom for the one who thinks differently’ should be tattooed on the eyelids of every aspiring political leader. To deny the democratic vote for Brexit would mean we live under ‘no freedom at all’ and risk ‘life dying out in every public institution’.

A last thought on Luxemburg and Brexit. In 1911, when the left was debating how to stop the coming war, leading German Social Democrats started pleading with their ruling classes to form a capitalist United States of Europe. Karl Kautsky wrote that, ‘For a lasting duration of peace, which banishes the ghost of war forever, there is only one way today: the union of the states of European civilisation into a league with a common commercial policy, a league parliament, a league government and a league army – the formation of the United States of Europe.’

That might ring a few bells today, when we are repeatedly told that the European Union is the reason why there has been no third world war, and that ever-closer EU integration is the path to future peace. Luxemburg’s scathing response to what she deemed the left’s ‘Peace Utopias’, however, should give pause for thought.

Luxemburg insisted that ‘the idea of a European Union’ as a ‘peace arrangement’, while ‘plausible at first glance’, was ‘a sterile concoction of the brain’, bearing no relation to economic or political realities. Internally, ‘there exist within Europe among the capitalist states – and will so long as these exist – the most violent struggles of competition and antagonisms’. Those antagonisms were not only to burst forth in the First World War four years later, and the Second World War 20 years after that, but have also been evident in ‘peacetime’ through the many conflicts and impositions of unequal power that occur within the ‘united’ European Union.

When it came to external relations, Luxemburg pointed out, the idea of a European Union was also deployed to divide Europe from the rest of the world: ‘Every time that bourgeois politicians have championed the idea of Europeanism, of the union of European States, it has been with an open or concealed point directed against the “yellow peril”, the “dark continent”, against the “inferior races”. In short, it has always been an imperialist abortion.’ They could write those last words on the EU’s tombstone. EU leaders might no longer use such loaded language, but the migrants struggling and dying to enter ‘Fortress Europe’ would doubtless get the point about their ‘concealed point’ against ‘inferior’ Others.

‘And now’, Rosa Luxemburg concluded on a European Union, ‘if we, as Social Democrats, were to try to fill this old skin with fresh and apparently revolutionary wine, then it must be said that the advantages would not be on our side but on that of the bourgeoisie.’ The left could do with some of her eagle-eyed vision today.