It has been blown up to give a kicking to football, press freedom – and Brexit. 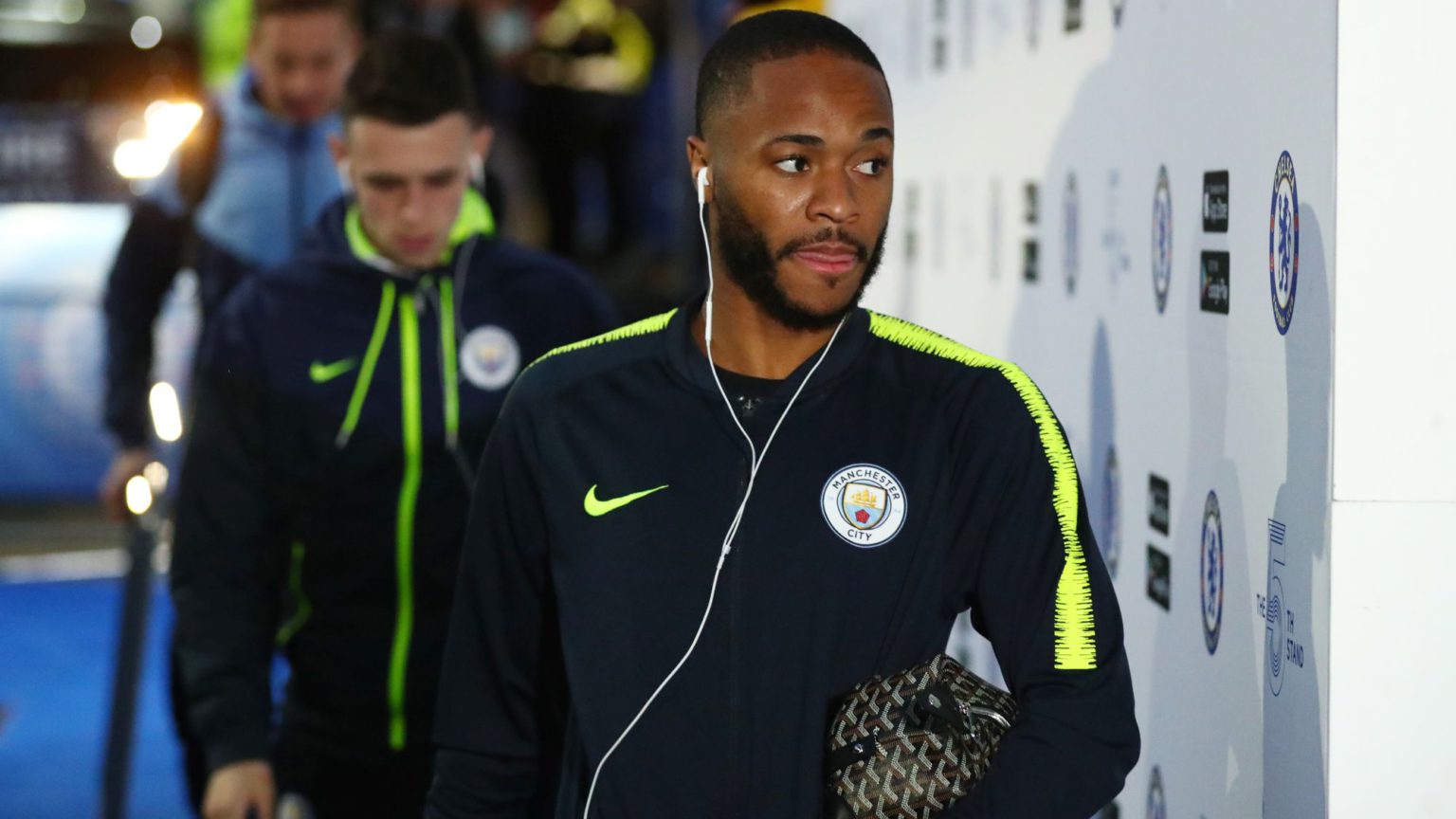 At a time when we’re repeatedly warned about how ‘dangerously divided’ our society is over Brexit, some worried souls might have taken solace this week from one thing that apparently brings our disunited nation together. If the wave of outrage across media and social media is to be believed, absolutely everybody not only hates the Chelsea fans accused of calling Raheem Sterling a ‘fucking black cunt’, but wants the perpetrators hanged, drawn and quartered live on YouTube.

It was no surprise that the seconds-long video of Chelsea supporters screaming abuse at the Manchester City star on the touchline last Sunday ‘went viral’. What was remarkable was that, for several days, this little incident competed with the political crisis for national news headlines.

That cannot be explained by anything a few ordinary looking middle-aged blokes did or didn’t say at a football match. Instead, the Sterling affair has been blown up into a political football to be used in the favourite game of British snobs: giving all common football fans a kicking as racist thugs, sticking the boot into the tabloid press for allegedly stoking prejudice and violence, and demanding stricter policing of both. Behind all that lurks the fashionable belief that working-class Brexit supporters are a bigoted mob.

Despite the cries of outrage, that short video was actually a godsend to some, who seized upon it as apparent proof of their prejudices and milked it for all that – indeed far more than – it was worth. The fact that those accused denied using racist language and nobody else seems to have heard it made no difference to the lynch-mob mood.

One pundit after another lined up to condemn the ‘despicable’ images as proof that, in the words of former Arsenal striker Ian Wright, ‘the bad old days are back’ and that racism in football is no better in 2018 than it was in the 1970s. Sterling himself raised the stakes by posting a widely reported message on Instagram. Despite admitting that he ‘had to laugh’ at the time, Sterling now blamed the tabloid press for coverage of black players which ‘helps fuel racism and aggressive behaviour’.

The examples Sterling came up with were two obscure Mail reports about young footballers buying expensive properties, one of which said 18-year-old white starlet Phil Foden had bought a posh pad for his mum, while the other revealed that 21-year-old black player Tosin Adarabioyo had spent £2.25million on a house ‘despite having never started a Premier League match’. The notion that this line in an online article nobody remembers could spark a race riot might strike some of us as bizarre. Yet serious journalists were quick to agree with Sterling about the hate crimes of the mass media. (Meanwhile, the former Mail reporter responsible for the story, Anthony Joseph, seemed bewildered by the fuss, vainly insisting that the article had nothing to do with race and that he – a Scottish Asian – had been racially abused online after writing it.)

Next, news broke that Chelsea had identified the alleged culprits, banned four season-ticket holders, and passed on their names to the Metropolitan Police, while top lip-readers went to work deciphering what had been said. The main accused, 60-year-old Colin Wing of south-east London, then gave his story to the Daily Mail. Wing offered his apologies to Sterling and said he was ‘deeply ashamed’ of what he had done. ‘But I didn’t call him a black cunt. I called him a “Manc cunt”.’ He said he had now lost not only his season ticket, but his job.

We must await the official police lip-readers’ verdict, of course. But looking at the video it does seem to me that the bespectacled Wing was shouting ‘Manc’ rather than ‘black’. (Nobody else claims to have heard racist language, including a black fan sitting nearby.)

Such non-racial abuse is par for the course at football and has long been deemed fair enough in the heat of a big match. As I have argued before, football is the home ground of the id, the emotional, irrational side of the brain, where people shout, sing and behave in ways they would not dream of doing in the world outside. As the apologetic abuser Wing put it, he ‘got carried away’.

Another fan who was involved, 54-year-old trucker ‘Dean’ from Barking, rang the perpetually outraged TalkSPORT radio station to apologise to Sterling and try to explain. ‘I didn’t call him anything [racist], I called him an effing… and pointed at him and said “you’re a waste of space and you’re an embarrassment to England”, and then the whole stand started chanting “Raheem Sterling you run like a girl”… Even what I said shouldn’t have come out, it was the passion of the game.’

It might seem a sad state of affairs to hear normal middle-aged men getting their kicks by shouting abuse at footballers. But it should surely not be treated as a hate crime. It’s just football, not real life. But that distinction is lost on all those who would now impose dinner-party etiquette on the raucous carnival of the match, like the senior police officer who tells fans, ‘You wouldn’t do it in an office, why do it on the terraces?’.

Even if somebody rules that a Chelsea supporter did use the word ‘black’ on Sunday, that would not mean football is racist. The ‘bad old days’ are not back. Recent TV documentaries fronted by Ian Wright were reminders of the sort of unapologetic racist abuse which earlier generations of black footballers received back in the 1970s and 1980s, when Britain really was a racist society.

Of course, there are still some racists around football, and not only at Chelsea – a year ago a Manchester United fan was jailed for calling Sterling a ‘black Scouse cunt’ and kicking his leg outside Manchester City’s training ground. No lip-readers required on that occasion. But as City manager Pep Guardiola observed soon after Sunday’s incident, why give a few racists so much publicity? Just how far things have changed has been demonstrated by the overwhelming reaction this week against the very suggestion of a breath of racism at the former skinhead citadel of Stamford Bridge. Far from peddling racist stereotypes, the media and social media are now busy spreading the self-serving prejudice that British working-class football fans are a racist pogrom waiting to happen.

This is part of the ongoing crusade to sanitise football and tame terrace culture, turning the stadium into another offence-free ‘Safe Space’. To some of us, hearing players called a ‘Manc cunt’ in the heat of the match remains no big deal, and no more racist than me being called a ‘Cockney cunt’ when I went to Manchester University from suburban Surrey in the 1970s. The official line, however, is that not only the ‘n-word’ but the ‘c-word’ should be banished from the stands.

And the overreaction to the Sterling incident is not just about football. It is about demonising football fans as the ugly public face of an allegedly bigoted working-class rabble. These days that, in turn, is code for ‘Leave voters’. Which is why, before anybody even knew who was involved or what they said, never mind how they might have voted in the EU referendum, the ‘B-word’ was all over the tide of social-media condemnations of those Chelsea fans. ‘Brexit has given these racists the green light’, ‘They were probably just pissed off because Brexit is such a fuck-up’, etc, etc. In short, they must all be typical ‘Fucking Brexiteer cunts’ – a form of bigoted abuse that is apparently acceptable in respectable society.

The modern media has certainly been guilty of peddling prejudices about footballers – but largely because of their class, not racial, background. The idea of upstart young working-class players earning millions and enjoying the ‘bling’ lifestyle rankles some in the public-school media corps.

Raheem Sterling has often been caught up in controversies, some more serious than others. He has twice been charged with assaulting girlfriends, though never convicted. Earlier this year, he was criticised by anti-gun crime campaigners, via the Sun, for having an automatic weapon tattooed on his leg, though the media seemed placated after Sterling claimed this was an odd tribute to his estranged father, shot dead in Jamaica when he was a child. But while Sterling has never been racially abused in the press, he has been caught up in the media snobs’ campaign to put wealthy young footballers of humble origins in their place, as when he was knocked for buying clothes from the budget store Primark or sausage rolls from Greggs.

I confess that, as a lifelong Manchester United nut, I don’t much like Sterling – for the sound football reason that he is a very good player who has starred for my two least-favourite opponents, Liverpool and now City. Sterling also gets stick from England supporters who feel he has not played for his country as well as he does for his clubs. (No, BBC, the generally poor player ratings he received at this summer’s World Cup were not because he is black, but because he wasn’t very good.) Sterling has that in common with previous England Aunt Sallys like David Beckham and Wayne Rooney, whose skin was as white as their shirts. He has yet to enjoy Beckham’s fate, of seeing his effigy hanging from a noose outside a south London pub after a World Cup defeat.

If a Chelsea fan really had shouted ‘fucking black cunt’ in Sterling’s face, few could have blamed him for not laughing it off, but karate-kicking the offender, as le Dieu Eric Cantona did back in 1995. But we should not allow a mob of ‘liberal’ bigots to use an overblown row about alleged racism to give another kicking to football fans, press freedom, and Brexit voters – even if they do support Chelsea.