If Tommy Robinson is a monster, the left is his Dr Frankenstein

Time and again, the left’s failings have fuelled the Tommy Robinson phenomenon. 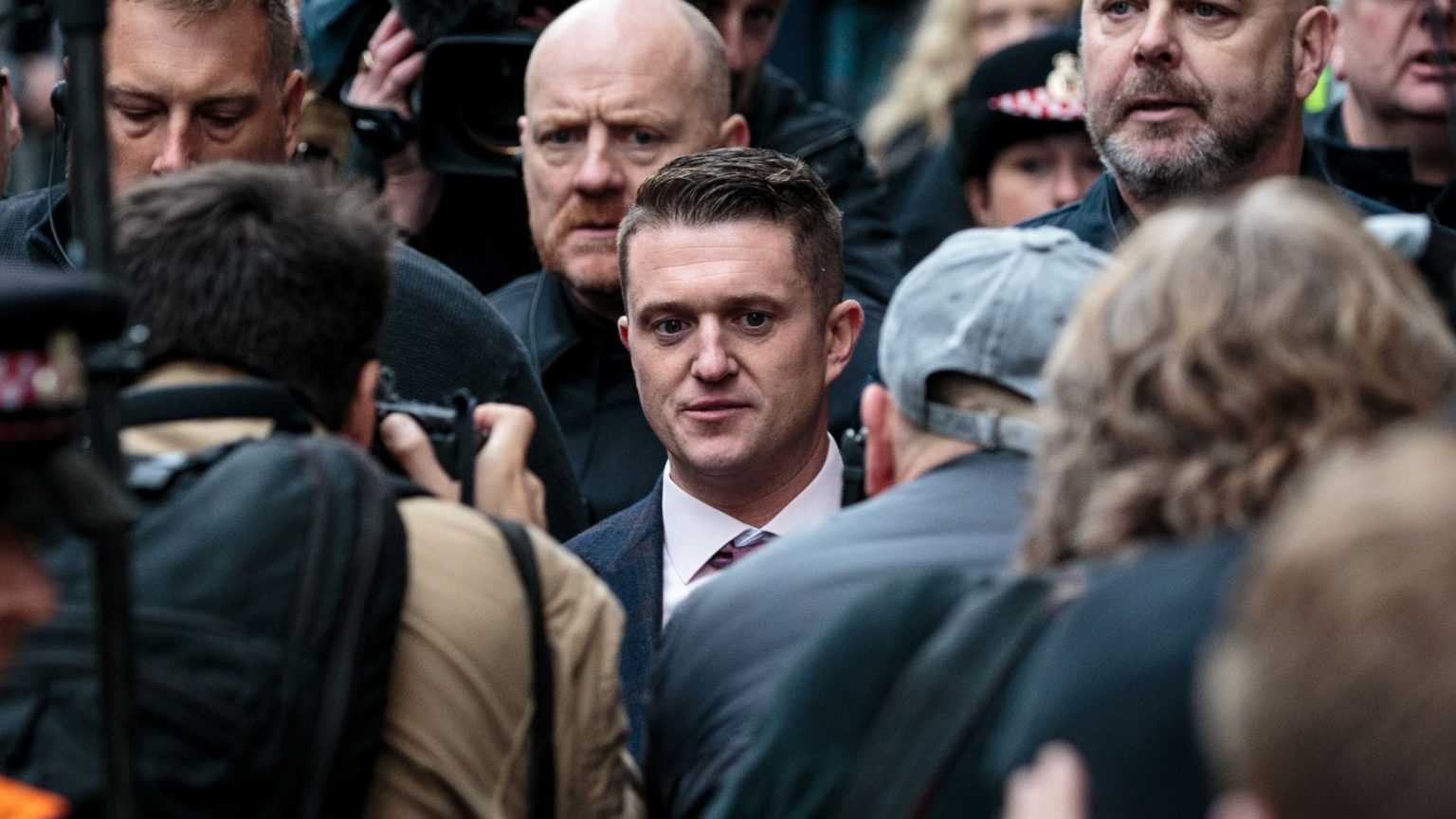 If Tommy Robinson really is the monster that much of the media claim he is, then the left is his Dr Frankenstein.

Almost every aspect of the Tommy Robinson phenomenon – from his positioning of himself as the teller of difficult truths to the idea that he poses a one-man threat to the social order – has been gifted to Robinson by the left.

Through demonising open discussion about radical Islam and the tensions in multicultural Britain, leftists and liberals paved the way for Robinson to pose as the lone brave voice raising awkward questions about Islamist terror or Muslim grooming gangs.

And in then raging against Robinson as if he were Oswald Mosley Version 2, a bona fide fascist who threatens to unravel social peace in the UK, these same people imbued Robinson with an awesome power and sense of global menace he could never have earned for himself.

They facilitated both his USP – his willingness to break censorious codes and say the unsayable about cultural divisions – and they boosted his public profile in a way no PR man ever could have. I don’t know if Robinson has an agent, but if he does he should sack him, because he has an army of agents on the left who are cultivating and inflaming the Tommy Robinson phenomenon literally for free.

This weekend, Robinson will be one of the key figures at the Brexit Betrayal march in London. On Sunday, in a protest backed by UKIP leader Gerard Batten and Robinson, who was recently made one of Batten’s advisers, protesters will gather to kick up a stink about the political class’s selling-out of the vote for Brexit and its determination to keep us entangled in EU institutions.

This UKIP-Robinson hook-up has understandably caused a stir. Some UKIP members are unhappy that their party is rubbing shoulders with the former leader of the English Defence League. Nigel Farage resigned in protest.

In the left-leaning and liberal media, meanwhile, you could be forgiven for thinking it was 1936 all over again and that literal Blackshirts will descend on the seat of power on Sunday.

‘This is our Cable Street’, Corbynistas cry, in reference to the Battle of Cable Street in east London in 1936 when East End Jews and radical leftists heroically faced down Mosley’s mob. (Not Labour Party leftists, though: the Labour Party counselled its members to stay away from this affray, cowards that Labour has always been.)

Of course Sunday will be nothing like Cable Street. First, because this is not a march of fascists, but simply of right-wing people, and some hard-right people, of course. They might have views that many of us find unpalatable, but that doesn’t make them Nazis.

And secondly because 2018 is not 1936. It is nothing like 1936, in fact, whatever Guardian editorialists, the Archbishop of Canterbury, Prince Charles and Momentum members might say to the contrary. (This is the rather mixed bourgeois bunch who have hysterically compared the rise of Brexit Britain and the spread of populism in Europe to the march of fascism 80 years ago.)

No, Sunday is being compared with Cable Street not because it will be anything like Cable Street, but because the Corbynista movement desperately needs a Cable Street, and so they’re inventing one.

Corbynistas need that kind of moment, something that feels historic, real, meaningful, in order to add a dash of reality to their otherwise unhinged claims that fascism is returning and Corbynism is the brave internationalist movement that will face it down.

Corbynistas are engaging in what we might call historical appropriation: they are appropriating working-class East Enders’ genuinely brave direct action against actual fascists in order to give the appearance of revolution to their drab, decidedly un-radical state-socialist project and their pointless march against a gathering of disgruntled right-wingers on Sunday.

In the process, they massively overstate their own radical credentials and they dilute the heroism of Cable Street. It does a disservice to those working-class heroes of the 1930s to speak of them in the same breath as today’s middle-class academic leftists who will in essence just be shouting at a gruff bloke from Luton for being mean about Muslims. Anti-fascist resistance it is not.

But then, this sums up the Tommy Robinson phenomenon: its fuel is almost always the rashness and exaggerations and fears of the left.

So the left establishment’s chilling of frank, free discussion about Islam, multiculturalism and fragmented Britain has played directly into Robinson’s hands. The censorious branding of any questioning of Islam as ‘Islamophobia’, and any opposition to mass immigration as ‘xenophobia’, sends the signal to people that there are certain things they mustn’t say in polite society.

It is made clear that the mainstream public square will not tolerate their ‘racist’ concern about Muslim grooming gangs, or their ‘hateful’ dislike of the niqab, or their ‘Europhobic’ desire to end the freedom of movement foisted on us by membership of the EU.

And so, with baleful predictability, other forums emerge, outside of the mainstream, in which people gather to say the unsayable. One of the chief architects of these forums has been Tommy Robinson. He has proven himself adept at creating self-styled ‘no censorship’ zones in which people who feel ignored or demonised can express themselves. Witness both the EDL and later the Football Lads’ Alliance (much of which has distanced itself from both Robinson and the old EDL): these are not fascistic people, but mostly individuals who feel that mainstream politics no longer caters to their views and, worse, looks upon them with naked, elitist contempt.

And, strikingly, there’s Brexit. If some people are turning to the likes of Robinson to represent their frustration with the prevention of Brexit, as they will be on Sunday, that is surely because much of the left has spent the past two years demonising Brexit and the people who voted for it. With no serious mainstream voice willing to speak to their concerns about the EU, Brexit and the future of democracy, some people go looking for other voices.

It isn’t ‘too much freedom of speech’, or being ‘given a platform’, to use the modern parlance, that has energised the Tommy Robinson phenomenon, as censorious leftists would have us believe. Rather, it is their censorship that did that. It is the stymying of open debate that nurtures the space for the rise of self-styled and often quite eccentric ‘truth-speakers’.

And then the left throws petrol on this fire by massively exaggerating Robinson’s threat. Not content with creating the conditions in which he can rise up as a self-styled leader of the ignored, they then speak of him in the same breath as Mosley, and even Hitler, despite the fact that he has no real movement, no military forces, no actual power. They flatter, incessantly, the Tommy Robinson phenomenon, and enable Robinson to continue styling himself as one of the most important political figures not only in Britain, but in the Western world.

We end up with a darkly symbiotic relationship: the left needs Tommy Robinson, in order to prove that its ridiculous thesis about the return of fascism is correct, and Tommy Robinson needs the left because it is the left’s fear, loathing and pursuit of him that furnishes him with political importance and substance.

What we will see in London on Sunday is not a protest, far less a new Cable Street-style battle, but rather a mutually reinforcing performance, where the left will get to play at being anti-fascists and Robinson and his supporters will once again have their sense of historic importance stroked and strengthened. It will be a sad spectacle.