Why the left can’t lead the yellow vests

So-called radicals have become fearful of revolts like this one. 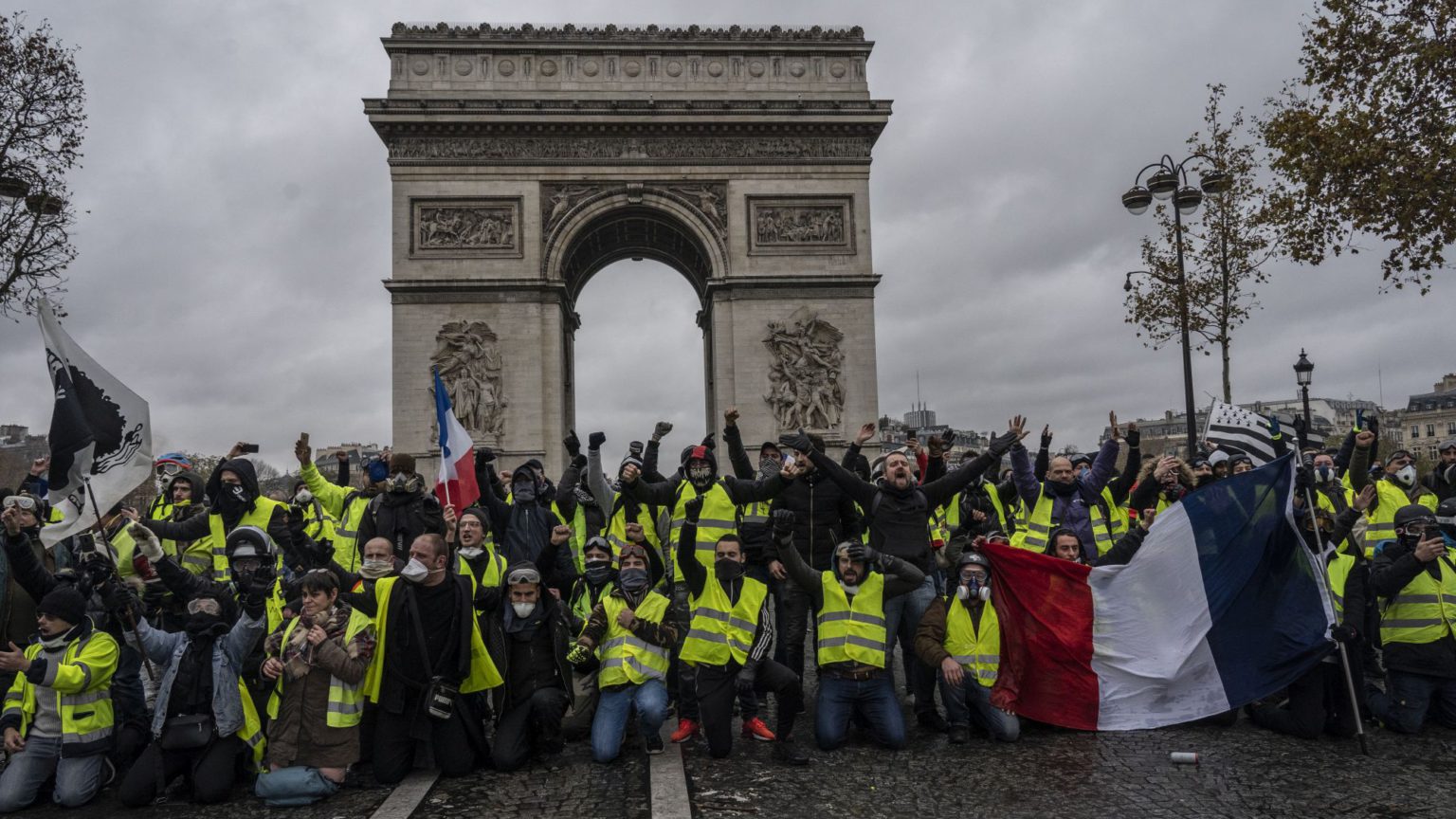 The French are certainly not shy of taking to the streets. Strikes, demos and protests are a normal feature of French political life. But the rise of the gilets jaunes – a leaderless, bottom-up protest movement sparked by green taxes – is something different. These protesters, whose symbol and uniform is the hi-vis jacket that all French people are required to keep in their cars, have staged the most significant revolt in France since les événements of May 1968.

For the past month, hundreds of thousands of yellow vests have taken to the streets all over France. Some have blocked fuel depots, supermarkets and motorway junctions, others have staged barricades outside government buildings. Organised on social media, this spontaneous, leaderless movement initially sprang up in response to a hike in tax on diesel. But it has grown to encompass a wider mood of anger against the French establishment. High levels of taxation, low wages, declining purchasing power and the growing divide between the big cities and their peripheries have all played a role.

Last Saturday, protests in Paris exploded into full-blown rioting on the Champs Élysées: cars were torched, windows were smashed and the Arc de Triomphe was daubed in anti-Macron graffiti. But these violent scenes in Paris have not dented the movement’s popularity. A poll for RTL, conducted after the riots, showed that while 85 per cent of the public are uncomfortable with the violence, a whopping 72 per cent support the movement.

Other actions have contributed to the mood of insurrection. On Monday, paramedics staged a surprise protest against social-security reforms, with over 100 ambulances blocking traffic to the National Assembly. High-school students have staged blockades in over 500 schools to protest education reforms. In Pau, in the south-west of France, an extraordinary stand-off between yellow-vest protesters and police ended up with the police agreeing to remove their helmets before the crowd would disperse.

What is more, the movement has already achieved some concrete successes. Prime minister Éduoard Phillipe has agreed to suspend the rise in fuel taxes for at least six months. But it is unlikely that this will appease the protesters.

All of this raises the question: where is the left? Where is the section of politics that is supposed to agitate for political change, for the advancement of working-class people, their interests, their purchasing power and their political power?

It is telling that when the protests were organised, they bypassed France’s organised left entirely, eschewing not just the political parties, but the trade unions, too. The reaction of some on the left suggests they were right to.

As soon as the first protests emerged, Macron’s ministers immediately tried to discredit the gilets jaunes as having links to neo-fascists. Many on the left initially bought into this establishment line. Former presidential candidate for the centre-left Socialist Party, Benoît Hamon, dismissed calls to join the gilets jaunes, saying he would not march side-by-side with the far right.

Much of the left-leaning media has similarly struggled to get to grips with the yellow-vest phenomenon. After the first weekend of protests, L’Obs magazine ran a cover story warning of the dangers of a ‘populist’ revival via the protests. As the centre-left daily, Libération, put it, commentators are divided between those who see the protesters as representing the ‘just anger of the people’ and those who see them as a ‘band of polluting oafs, addicted to their cars, who need to be dealt with by the police’. One Libération correspondent tweeted that the yellow-vests were simply a ‘movement of hicks’, who were mostly ‘far right’.

Jean-Luc Mélonchon, leader of the far-left France Insoumise, initially offered tentative support to the movement. But he was reluctant to get involved himself. He has since written many excitable blogs, declaring the yellow-vest revolt to be a ‘citizens revolution’. But he is conspicuously late to the party. That even an avowed revolutionary was initially wary about working people taking to the streets to stand up for their interests is revealing.

Despite understanding the grievances of the yellow vests, the left is disoriented. In part, this is because it is broadly supportive of the government’s environmentalist agenda. The Socialist Party introduced the fuel tax that Macron had planned to raise. France Insoumise promises environmental policies that are even more radical – it wants to transition to a zero-carbon economy (although it claims that there are less regressive ways to achieve this than taxes which fall disproportionately on the rural poor).

But there is a deeper disconnect, too. Across the West, the left has struggled to know how to respond to the populist uprisings of recent years. There is a tendency on the left to denounce any shock to the status quo as driven by reactionary forces. The revolting masses are often written off as fascists.

That the yellow vests – a mass, largely working-class movement, defying the government and standing up for its interests – makes many on the left, at best, wary and, at worst, scornful is a damning indictment indeed.