Genoa: notes on a disaster 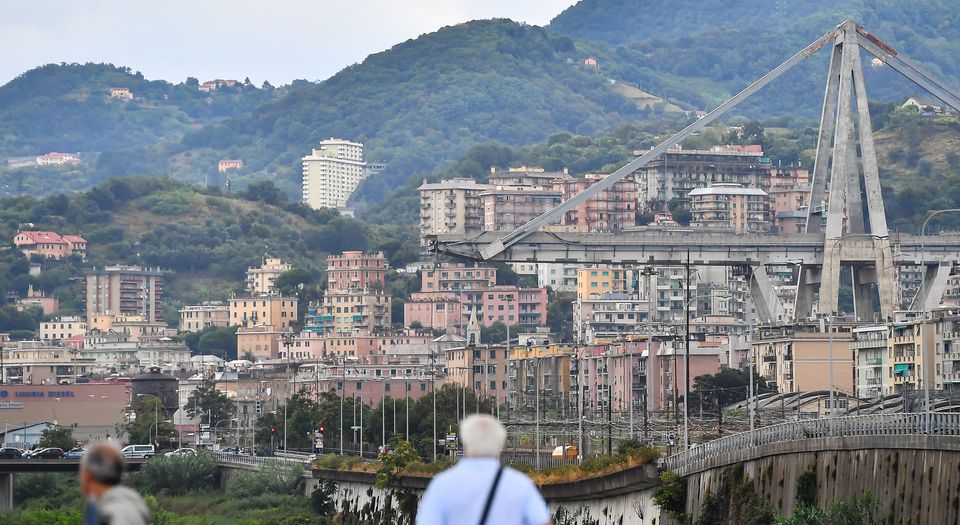 The appalling tragedy of the Morandi Bridge, which collapsed on Tuesday, 14 August 2018, is a disaster that is still under investigation. At the moment, there are reports of 40 lives lost, but not much is known about the causes or the wider consequences. I am loath to speculate about either, but there needs to be a wider conversation and not simply kneejerk demands for corporate manslaughter charges against the private bridge-operating company, Autostrade per l’Italia. Heads will roll – deservedly so – but we must look at wider concerns about infrastructure, per se. (I caveat all of this by saying that pre-empting the ongoing investigation may reveal me to be wide of the mark.)

Firstly, the collapse was extraordinary. The bridge – built in the mid-1960s and named after the civil engineer Riccardo Morandi – is architecturally unique, and with this comes unique stresses that may have given rise to the catastrophic failure. A similar collapse of a similar nature and magnitude has not occurred before with a cable-stayed bridge. This bridge had 90m-high concrete towers that held tensioned cables fixed at an angle to the deck (the roadway), meaning that as the cables were being stretched by the loads, the towers were being squashed by the same loads. In engineering terms, the weight of the deck (and the traffic on it) was carried by the combined structure, meaning that the towers were under tremendous compression while the cables were under tension.

Bridge design always makes allowances – contingencies – for localised failure, and therefore even the most efficient, slender structures tend to be over-designed so that the engineers can sleep at night. The bridge has to imagine, for example, wind loads, snow loads, or 250 lorries being on the bridge rather than just 250 cars. But have the owners and managers of this bridge kept up with the reality, that in the 60 years or so since this bridge was constructed, loading conditions have significantly increased owing to increased freight volumes and vehicle sizes? Has this unseen attritional damage finally come home to roost?

In this bridge design, there is only one angled ‘stay’ (made up of four steel cables) encased in a concrete covering. The idea was that the concrete would protect the steel from weathering, corrosion and failure. Maintenance work as recently as 15 or so years ago replaced some of the cable stays and recoated them in concrete. Suggestions that cracks in the concrete exacerbated the ingress of water, which speeded the corrosion of the cables, are possible, but not totally convincing.

Were the cables to snap – possibly requiring more than one to snap due to the engineering contingency discussed above – then the deck would fall and possibly overbalance the entire structure. However, the fact that the towers collapsed in such a horrific fashion – seeming to crumble – may hint that the problem may lie in the foundations, where regular maintenance work was being carried out. We just don’t yet know. As Professor Gordon Masterton, from the University of Edinburgh’s school of engineering, told the Guardian, there needs to be a ‘forensic and thorough’ investigation to get to the root cause.

What should not happen is something like a replay of the kneejerk response to the Grenfell Tower tragedy in Britain. After the fire at Grenfell, seemingly caused by flammable external cladding, hundreds of councils across the country panicked and spent large chunks of their budgets randomly ripping off cladding from tower blocks with no clue as to why they were doing it. If Italy were now to institute a major spending spree on inspecting all bridges to appease the risk lobby, it would be a real waste of time and effort.

But as we wait on an investigation, rather than speculate about the finer points of metal fatigue, let’s look at some of the broader influences on Italian infrastructure provision over recent decades.

In the 1960s, Britain’s prime minister Harold Wilson famously crowed about the ‘white heat of technology’. It was a pledge to turn Britain from an old-school labouring nation into a leader in science, technology and social progress. It was a time of experimentation premised on economic growth and productivity. In Italy, at around the same time, GDP growth was, on average, five per cent per year throughout the 1960s (six per cent in the 1950s), compared to around one per cent in the UK. As a consequence, more experimentation, more rapid, untried innovation, was being explored. As the economy boomed, urbanisation hit 50 per cent at the end of the 1960s (compared to 40 per cent at the start of the 1950s).

Peasants from the south moved to the north looking for a share in the industrial wage gains of their northern compatriots. Many of these unskilled labourers were put to work on infrastructure projects. As one report notes: ‘Between 1950 and 1967, some 17,000,000 Italians, more than a third of the population, moved from one district to another. Although a certain amount of small industry and construction work did come to the south, it was not enough to prevent a massive migration to the north. This constant reserve of labour was exactly what the Italian bosses needed. It helped to keep wages down.’

In the same way that we see low-wage internal migration used as a cheap source of construction labour in modern-day China, Italy also transformed a significant number of agricultural workers into builders overnight. Some were recruited to complex infrastructure projects while lacking training, recompense and decent standards of living. It would not be surprising to hear that latent problems of sub-standard construction are beginning to show from that period. That said, these problems would be something that a regular maintenance and replacement and upgrading programme should have been able to handle.

In some ways, the Morandi Bridge disaster is Italy’s Ronan Point. Ronan Point was the experimental high-rise housing project built in east London, using large prefabricated panels, substandard detailing and unskilled labour. A minor gas explosion led to a catastrophic collapse where high-level apartments crumpled like a deck of cards. Without that nudge, the building may have survived for as long as the Morandi Bridge (exactly the same kind of flats are still standing around the site of the now demolished Ronan Point). It took one spark – literally – to reveal the flaw. And tragedy ensued. Whether a similar integral flaw lay within the Morandi Bridge is yet to be revealed, but maybe this too could have been explored if the political and financial will to do so was more in evidence.

Sadly, Italy is not a stable political entity. Ever since the Second World War, it has averaged one new governmental administration every 10 months. With that level of political uncertainty, it is hardly surprising that a significant future-oriented infrastructure plan hasn’t been consolidated. Indeed, it is remarkable that anything has been done at all.

Currently, the new coalition government of the League and Five Star is being pilloried for dismissing prior concerns about the safety of the Morandi Bridge as ‘a fairy story’ that should be ignored. The fact that people have suspected this bridge (because of its constant repair schedule) of structural dangers over the years, and over many administrations, just shows that the current administration is as contemptibly ignorant of people’s fears as were any of its predecessors. It was strangely reminiscent of Kensington and Chelsea’s deaf ears on Grenfell Tower.

The coalition is obviously keen to criticise the EU – and with some justification. Its reasons for doing so seem more self-defensive than anything else. But the truth is that European Union spending restraints impose a restriction on what deficit (investment) member states are allowed to run up. Currently, Italy’s budget deficit is at 1.5 per cent, well below the five per cent permitted by EU rules. But there is a principle at stake here in terms of the external authority of the EU dictating internal financing terms. At the moment, it is a convenient political football for the coalition, but if it were seriously to challenge the spending limit, it might open up a real political confrontation with the EU over national sovereignty.

Another factor we need to explore in relation to the Morandi Bridge disaster is the rise and rise of environmentalism. Over the past 20 years or so, environmental campaigners have welcomed a steady decline in car-related infrastructure investment and the rise in alternatives, like rail. Since the financial crash of 2008, investment in roads has dropped by over 75 per cent in Italy.

The Morandi Bridge was a key route from Italy to the south of France, and so there can be little doubt that its commercial sensitivity would not allow it to become an environmental football, as we have seen in other parts of Europe. But politically, the will to build new road networks, let alone maintain old ones, is clearly lacking. EU operational and maintenance budgets decreased in Italy by around 45 per cent between 1995 and 2013. Between 2007 and 2013, they fell by 60 per cent. Perhaps the reason the construction flaws were missed was because no one ever looked for them.

The tin hat is put on this situation by the level of institutionalised corruption within Italy. I am nervous about raising the issue of the Mafia because it sounds like a caricature, but it is clearly a factor. The syndicated crime gangs operating in construction prevent a sensible, safe and democratic debate about infrastructural procurement, development and maintenance. Road-building procurement practices are a dangerous game.

One last example to demonstrate how uniquely peculiar and – in some ways – out of control is the provision of road infrastructure in Italy. The 450km stretch of highway from Salerno to Naples includes one of the highest bridges in Italy, the Rago Viaduct. This motorway project was started 52 years ago. It is still unfinished.