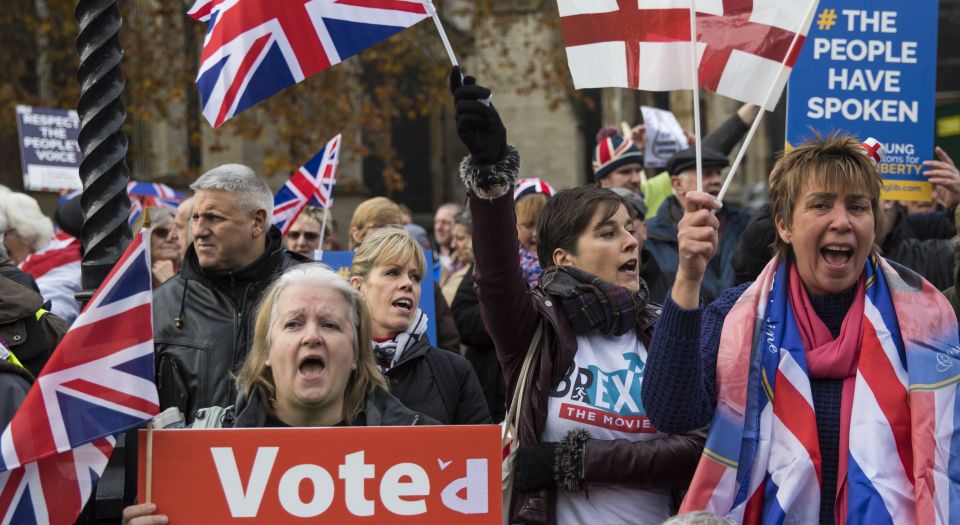 Why the Brexit revolt cannot be undone.

Among the wave of populist uprisings on both sides of the Atlantic over the past few years, the Brexit vote was unique. Unlike the ballot-box revolts that gave us President Trump, a populist coalition government in Italy, and a hard-right party in Germany surging to become the non-official opposition, the Brexit vote was party-less – leaderless even. The 17.4million-strong vote to Leave cut across party lines. The leadership of almost the entire political class opposed it. Only two tiny parties in the UK Houses of Parliament at the time of the June 2016 referendum, the UK Independence Party (which then had one MP, and now has none) and the Northern Irish Democratic Unionist Party (eight MPs then, 10 now), were formally committed to Brexit. A remarkable 75 per cent of MPs voted Remain. And though media chatter during the campaign had it that a vote to leave would empower the politicians who backed it, UKIP all but collapsed in the wake of the vote, and a Remainer took control of the Conservative Party.

Where other European and American citizens, fed up with their distant and disdainful elites, had to resort to right-wing, even hard-right, populist parties and figures in order to make their presence felt, the British public were given a clean shot, and took it. And we were only given the opportunity because former prime minister David Cameron called a referendum betting he would win it. This is Brexit’s great strength, but also its great weakness. It has made British voters’ demand for more control far harder to dismiss as unreconstructed nativism (though the domestic and international elites have made a pretty good fist of it). But, in turn, it lacks any pre-existing vehicle that could defend and implement it. Now, as Brexit is slowly being betrayed by parliament and the civil service, it falls to handfuls of backbenchers to stick up for the people’s will. And as we have seen over the past two years, this has given the establishment the time and space to try to reassert itself.

‘Nothing has changed.’ So said an embattled Theresa May two weeks before the 2017 snap election, as she tried to pretend her u-turn on her flagship social-care policy, which had gone down like a cup of cold sick with voters, was no u-turn at all. It became a kind of epitaph for May’s ill-fated election bid – which she called thinking she would seize a 100-plus-seat majority, but ended up at the helm of a minority government. It summed up – along with her Maybotic slogan, ‘Strong and Stable’ – her stiffness, her inability to talk straight with voters. It was a reminder that the self-styled born-again Brexiteer was in truth the definition of the duplicitous, distant technocrat a majority of British voters had rejected at the EU referendum a year earlier. But in the ongoing battle over Brexit, Nothing Has Changed could just as easily be the refrain of an entire reeling elite, desperate to put the Brexit genie back in its bottle.

This has been most explicit, and craven, in the elites’ ongoing mental breakdown over Brexit. First up, we were told we didn’t know what we voted for. We’d been brainwashed by populist demagogues. Former PM John Major raged against the ‘tyranny of the majority’, to much Remainer applause, rather letting slip that it was apparently the tyranny of the minority that he was keen on. Then came the lawsuits, as well-heeled businesspeople and lawyers tried to slow down the Brexit process in the courts, with cases brought over whether the executive needed parliament’s say-so to invoke Article 50 (which prevailed), and whether the UK could revoke Article 50 (which didn’t). Now, rather than trying to stop Brexit, elite Remainers are trying to argue it was somehow illegitimate, either because Vote Leave overspent, Cambridge Analytica’s Facebook ads hijacked our brains or Arron Banks had lunch with the Russian ambassador.

But the desire to quash, or at least contain, Brexit isn’t consigned to the Remainer ultras. The Conservative government and Labour leadership are nominally committed to Brexit: at the last election, both stood on manifestos that explicitly pledged, or at least heavily implied, that they would implement the Brexit vote and we’d be leaving the Single Market and Customs Union. But look at where we are now. Theresa May’s Chequers Deal – her opening offer in trade talks with the EU – would keep us in the Single Market for goods, binding us in to EU rules and ECJ jurisdiction in perpetuity. Labour, meanwhile, wants to magic up some new, more flexible customs union with the EU. The two main parties only differ as to what degree Brexit should be screwed over. And, in any case, Brussels rejected May’s Chequers capitulation before the ink was even dry.

Herein lies one of Brexit’s many paradoxes. While it was a revolt against the entire political class – a sign, if ever we needed it, that the neat left-vs-right, Labour-vs-Tory, working-class-vs-middle-class, divide no longer gave expression to the new fault lines in 21st-century British society – these two parties, these relics of the old order, remain intact, if increasingly in disarray. In the 2017 election, Labour and the Tories achieved their highest combined vote share since 1970. The smaller parties were squeezed out. Many hailed it as the return of two-party politics after more than a decade of talk about Britain entering a more continental multi-party system. For the commentariat, there was an almost audible sigh of relief. After all the weirdness of Brexit, things were back to normal. Nothing has changed.

But under the surface, seismic shifts have taken place. 2017 was the first election in modern British political history in which social class was not a predictor of how people voted. This was because the Tories had huge gains in working-class, Leave-voting areas, while Labour hoovered up support in middle-class Remain-backing metropolitan centres. This was the election in which the Tories, the old party of the establishment, took Mansfield, and Labour, the party of the people, took Chelsea. Far from reverting to two-party type, British voters are realigning British politics from within the existing structure along (largely) Brexity lines. According to the post-election Ashcroft Polls, 68 per cent of those who voted Conservative were Leavers, and 64 per cent of those who voted Labour were Remainers.

And yet the new coalitions forming under the two main parties are incredibly unstable. Theresa May is pushing for a Soft Brexit that can only, in all likelihood, get softer as she negotiates with an intransigent EU. Yet YouGov polls show that 66 per cent of Leavers reject her plans as not fulfilling Brexit. Remain voters, many of them now with Labour, are more mixed in their approaches to Brexit, given most of them, good democrats that they are, still think Brexit should be implemented in some form: hence why 18 per cent think May’s plan is too soft, while 23 per cent think it is too hard. The Labour leadership is still under intense internal pressure, from its membership, parliamentary party and the trade unions, to back a second referendum, but Jeremy Corbyn, a lifelong Eurosceptic turned Remainer at the referendum, has so far refused to oblige. And so May, a Remainer, committed to a Soft Brexit, is leading the party of Brexit, while Jeremy Corbyn, the secret Leaver, leads the de facto party of Remain, well aware that its anti-democratic drift will further alienate the working classes it claims to represent.

What we’re left with, then, is a political class that is so mired in infighting and internal contradictions that it is seemingly incapable of either wilfully thwarting or fulfilling Brexit, of pleasing or betraying its various voters and factions. This leaves what happens next almost anyone’s guess. Even if May’s Chequers plan somehow makes it back from Brussels intact, there’s no majority for it in the House of Commons. There’s no majority for any Brexit plan in the House of Commons. The threat of No Deal is being talked up by all sides, but only a slim minority in parliament think it is a viable option. The campaigners for a second referendum have their tails up, but few think the legislation for one could be put together in time. Some want an extension of Article 50, but there’s no banking on the EU granting it, and we’d only really be talking about a few extra weeks. All this chaos gives committed anti-democrats plenty of room for manoeuvre. But then many in the political class remain uneasy about reversing the referendum result, even if they are sympathetic to that. And on it goes.

Ever since the referendum, even some of the leading supporters of Leave have tried to play down its populist content. The liberal Tories of the Vote Leave campaign, the likes of Daniel Hannan and Douglas Carswell, maintain that Nigel Farage, UKIP leader and figurehead of the populist wing of the Brexit campaign, harmed the Leave cause more than he helped it. As one centre-right commentator put it recently, ‘in Britain… populist parties have no seats in parliament and a negligible vote share. Brexit killed off populism, by responding to legitimate public concerns’. But while the Brexit vote cannot be reduced to right-wing Faragism – his party, after all, collapsed in the wake of the vote and 70 per cent of Labour constituencies voted Leave – this position is complacent, and blind to the broader shifts. The Brexit vote wasn’t a democratic corrective that a humbled political elite duly responded to. It has rattled the parties to their core, sparked new alignments and heightened longstanding contradictions.

Britain has for a long time seemed immune to the populist fervour that has periodically struck elsewhere. Beyond the more obvious hindrance of a first-past-the-post voting system that works to lock out new contenders, there are various theories as to why this is, each more reductive and/or patronising than the last. Some say we’ve never sustained a populist party because the rabble-rousing tabloid press has always provided a safety valve for populist rage, at least its right-wing variety. Others say it simply isn’t in the British character. British people’s dislike of the elite, reads a 2013 report, is one of ‘world-weary sceptical quietism, not rebellion’. ‘We complain about the elites but do not convert that into action.’ How naive that seems now.

Though Britain’s populist revolt remains, for the moment, contained by a knackered party system, it is still thrashing beneath the surface. Whether or not Brexit is thwarted, things cannot hold. The old politics is dying, and yet the new politics is yet to be born. Nothing has changed, and yet everything has. Our job now is to shape it.