This was atomised middle-class angst dressed up as radicalism. 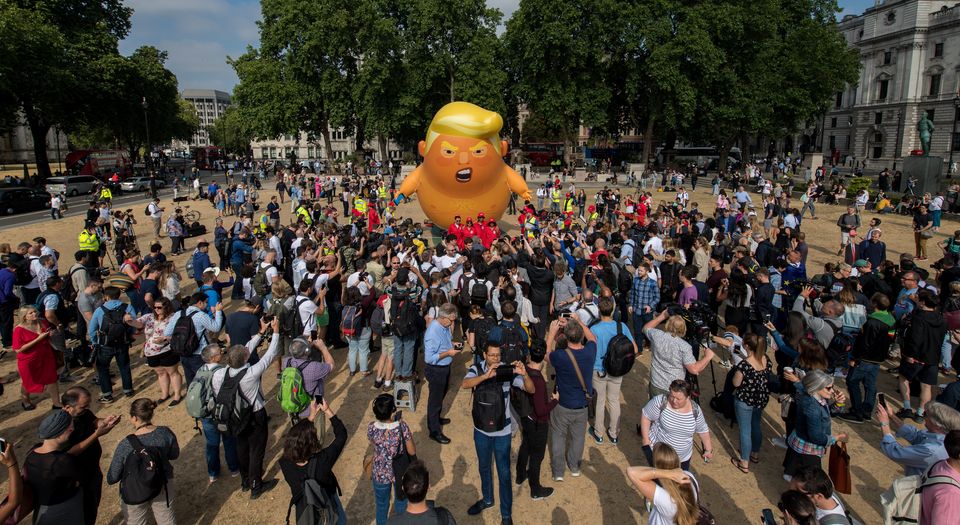 Some people claim the protests were in keeping with a long tradition of radical gatherings in Britain, from Suffragettes confronting coppers, to the mass rallies against the Vietnam War, to marches in solidarity with striking miners. But this is wrong. The anti-Trump protests were something new, and something very strange. These weirdly playful carnivals against Trump, people’s dancing and prancing and tweeting of their emotional disgust with the American president, speak to a new kind of apolitical protest, in which the aim is not to change the world but to trend online; in which people come together not to make a political statement but to make a personal one.

To those of us who take politics seriously, virtually everything about these protests was annoying. There were the cloyingly twee placards, desperately designed to make a stir on Twitter. You know the kind: ‘Things are so bad even introverted people are protesting’; ‘I hate Trump so much I hope he gets stuck on the Central Line in rush hour’; ‘Not usually my thing, marching – but honestly’, etc, etc.

There was the childishness: kids were everywhere, holding anti-Trump, anti-Brexit, anti-border control placards as if they know the first thing about politics. I wonder if they are the sons and daughters of well-connected Remainers and Guardianistas, by any chance…? Indeed, the Guardian published a piece by an eight-year-old explaining why she attended the demo. Of course it did. ‘I want Donald Trump to know we don’t like what he’s doing’, the brat said, which is funny because that infantile take on global affairs summed up the entire demo. And when an eight-year-old can capture the spirit of your protest, you know you have left the realm of adult politics for the playpen of emotionalism.

There was the disorganisation. People wandering around aimlessly, no one leading chants, no one really knowing where they were going, or more importantly why. Some people complained about imminent climate collapse, others worried about the return of Nazism, some were concerned that Trump would embarrass the queen. You could listen to one protester say the world will shortly end courtesy of eco-criminal Donal Trump, and another saying, ‘Oh my god, his tiny hands will touch OUR queen!’.

Get some structure, people. Get some focus. Is the world ending, or not? What was your key complaint? What do you want politicians to do? Because if you can’t answer these questions then your demo just looks like a rowdy middle-class picnic at which a hundred thousand people are in essence letting off personal emotional steam. This was less a coherent mass statement, as protests have traditionally been, than it was a few thousand declarations of personal angst, or moral superiority. Witness the placards saying things like, ‘We care’ and ‘I care, do you?’. It was strangely atomised. It wasn’t a political force, it was a lonely crowd: disparate individuals joining together as much to say something about themselves as about the world.

And there was the identity politics, too. I’m sorry, but to refer to the collective of drag queens who were spreading their legs for the cameras and instructing Trump to keep his hands off their (non-existent) pussies as ‘The Resistance’ is an insult to actual resistance movements that stood up to actual fascism. The self-aggrandising title of ‘resistance’ felt utterly out of place on a demo where people weren’t saying anything politically serious, weren’t saying what they were for, and looked absolutely knackered by the time they got to Trafalgar Square – I’m not sure these folks would have lasted long in the Spanish Civil War or running messages to rebels in Vichy France.

What all of this points to is a new kind of protest. There is a new generation for whom protesting is largely indistinguishable from a music festival. It has the same vibe, the same style, and the same constituency: the non-working classes, who define themselves through culture rather than labour, and who see themselves as having more in common with global technocratic institutions like the EU than they do with some of the people who live in their own towns (but on the other side of the tracks). If this is radicalism – which it isn’t – then it is passive radicalism. It is an entirely contradictory phenomenon, where on the one hand protesters are telling us actual Nazism is making a comeback, but on the other hand they’re not going to do anything about it except chill out in Trafalgar Square and post to Instagram a photo of them and their friends holding a ‘FUCK TRUMP’ placard.

The contradictory nature is captured in their use, or rather misuse, of language. To the leaders of these protests, everything is white supremacy; every bad Trump policy is an echo of the Holocaust; everything they disagree with – whether it’s the Brexit vote or clampdowns on immigration – is proof of the imminent return of fascism. This is a deeply cynical exploitation of the crimes of history to try to give their lame, shallow, playful protests a sense of historic meaning and urgency. Recognising, at some level, that it is bizarre to try to cohere a new movement around an American president who, historically and politically speaking, is not that different to other American presidents, they have to look for a way to justify their disproportionate anti-Trump obsession and emotionalism – and they do it by rebranding Trump ‘Hitler’ and therefore themselves as ‘The Resistance’. Never mind cultural appropriation – this is historical appropriation, the marshalling of 20th-century horrors to inject some depth into their childish, festival-like expression of middle-class angst.

That is perhaps the most disturbing thing about the new apolitical protest. Such is the playfulness that even history becomes their plaything. Even the Holocaust becomes their plaything. They denude these crimes and events of meaning and turn them into memes to make themselves look good. That really is unforgivable. In the process of bigging up themselves, they demean the unique barbarism of the Holocaust and fascism’s other crimes.

And the aim of it all? To trend. To make a spark on Twitter or Instagram, which is increasingly the only public spheres the disconnected political and cultural sets have access to. The new left gets as excited about trending online as the old left did about helping to get a wage rise for hard-up workers. Contrast the shrillness and hyperbole and moral self-righteousness of this anti-Trump lobby with the principles and patience of Brexit voters. And yet the latter are continually insulted while the former are celebrated. We should turn this on its head. You want to see some genuine political radicalism in Britain today? Look to Brexit. That was a calm, grown-up demand for sweeping political change, whereas the posh rage against Trump is little more than a pining for the old status quo dressed up as a new edgy resistance.