The Supreme Court’s judgment on abortion in Northern Ireland should worry democrats. 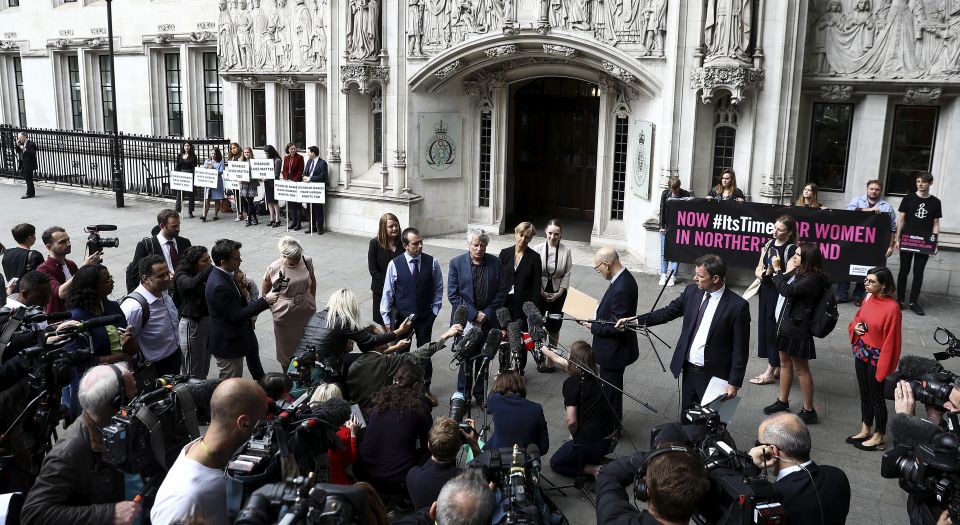 Last week, the UK Supreme Court dismissed an appeal brought by the Northern Ireland Human Rights Commission (NIHRC), which argued that Northern Ireland’s restrictions on abortion were incompatible with human-rights law. But the court did so on a technicality, on the issue of whether the commission had the required standing to bring the case. Despite this, a majority of judges ruled that Northern Ireland’s abortion policy was indeed incompatible with human-rights law, and, what’s more, produced a judgment that should chill anyone who believes in democracy.

The UK’s top judge, Supreme Court president Lady Hale, held that abortion is a matter ‘the courts are as well qualified to judge as is the legislature’. In fact, she claimed that ‘the courts may be thought better qualified’ to rule on this issue. Her justification for judge-made law being that courts are ‘able to weigh the evidence, the legal materials, and the arguments in a dispassionate manner, without the external pressures to which legislators may be subject’.

If Lady Hale is correct, then democracy is in peril. For if the courts are as good as, if not better than, parliament at determining abortion policy, then why shouldn’t they also make policy on assisted suicide, the family, prisons, welfare, taxation or foreign affairs? And if weighing evidence and considering arguments, in a dispassionate manner without external pressures, are the touchstones of good policymaking, then shouldn’t we just dispense with parliament? Why not go the whole hog and simply appoint the president of the Supreme Court as the country’s Supreme President? After all, he or she would not have to waste time answering the questions of either politically motivated MPs or the public.

Lady Hale’s enthusiasm for judge-made law is disturbing. Unless it is challenged, this ruling could result in a further accretion of judicial power at the expense of democratic power. We’d end up with a juristocracy, in which power (kratos) isn’t controlled by the people (demos), as in a democracy, but by the judges (juris). In a fully formed juristocracy, policy would not be forged by a dialogue between the people and their representatives, but by a dialogue between learned people (barristers) and even more learned people (judges). Passionate debate informed by political visions of society and ethical beliefs in right and wrong would be replaced by a dispassionate weighing of legal materials. Policy would be declared by the delivery of judgment, rather than by a winning of hearts and minds.

Now that the Supreme Court has passed judgment on abortion there really are no policy areas where the judiciary may not meddle. As it happens, judicial overreach is a problem some judges recognise. For example, Lord Reed, in this same case, disagreed with Lady Hale’s right to rule on abortion. Noting that ‘it is difficult to envisage a more controversial issue than the proper limits of the law governing abortion’, he concluded that ‘in a democracy on the British model, the natural place for that debate to be resolved is in the legislature’. But of the seven judges in last week’s abortion case, only one of them agreed with Lord Reed on this point.

Lady Hale and her acolytes – of whom there are many, especially in the legal profession – have had it too easy for too long. Their success in expanding law’s reach at the expense of democracy has happened by default. There has been little serious debate about the problem because there has been little serious appreciation of the intrinsic merit of democracy. Long before Churchill in 1947 described democracy as the worst form of government, except for all the others, there has been a lack of belief in democracy within the political class. Parliament fed the rot by passing the Human Rights Act in 1998, which vastly expanded judicial power. Lady Hale and others enthusiastically embraced the tools that parliament gave them.

But when the UK’s top judge openly calls for insulating decisionmaking from the people, it is time to argue back. The narrative that seeks to expand law and curtail democracy is fundamentally flawed, as Lady Hale’s judgment shows. For a start, political issues can only be treated as legal issues if we deny them their true essence. Abortion, for example, is a moral and political issue. But judges are neither moral philosophers nor political thinkers. So they have to shoehorn abortion into a framework they can cope with. Lady Hale shoehorned abortion into a rights-based framework created by the European Convention on Human Rights. ‘Moral and political issues’, she held, ‘are relevant only to the extent that they are relevant to the legal issues which have to be resolved’. But since law has expanded its reach over so many moral and political issues in recent years, Lady Hale was able to give her judgment on abortion without expressly engaging with any moral or political issues at all.

In the abortion debate, the issue of when life begins is central. It involves profound issues of belief, invariably related to political views on the role of women in society. But Lady Hale, with her rights-based legal framework, needed only one sentence, referring to two legal precedents, to state that: ‘The unborn are not holders of rights under the Convention or under domestic law.’ This is not a statement of moral belief, it is a statement of the law. She is treating a moral issue as a technical one.

Ultimately, all the talk of rights cannot disguise the fact that a political issue requires political judgment. Subjecting political issues to a rights-based framework may create the appearance of judicial impartiality, but one person’s rights invariably clash with another’s, and with the collective interests of a community. These conflicts need to be resolved. But relying on ‘legal materials’ to resolve them simply means relying on the political opinions of others.

For example, Lady Hale’s judgment draws heavily on rights in international treaties, namely the UN Convention on the Elimination of All Forms of Discrimination against Women (CEDAW) and the UN Convention on the Rights of Persons with Disabilities. But, since these international treaties do not specifically address abortion, she then had to cite how they have been interpreted by UN committees. Ultimately, after a lengthy citation of various UN committee reports, her conclusion was that the CEDAW committee’s recommendation to the UK on abortion should be followed and implemented, as a matter of law. Lady Hale’s legal judgment on abortion policy was little more than a political judgment outsourced to a UN body of worthies. She deferred to a decision made by people completely insulated from any sort of democratic pressure or accountability, as they fly between Strasbourg, Geneva and New York.

This judgment may have no legal effect (it took the UK’s legal system three years, at least 27 barristers and 11 top judges to work this out). But while the court’s conclusion on abortion should be disregarded, Lady Hale’s celebration of judge-made policy cannot. We need to ask ourselves whether we want abortion policy made by judges or by a UK legislature. Do we want public policy in general to be shaped by judges, scrutinising legal materials, or by politicians, addressing issues of right and wrong? Do we want to be the passive recipients of judge-made policy, or active citizens in a continuous dialogue with our elected representatives? In short, do we want to live in a democracy or a juristocracy?