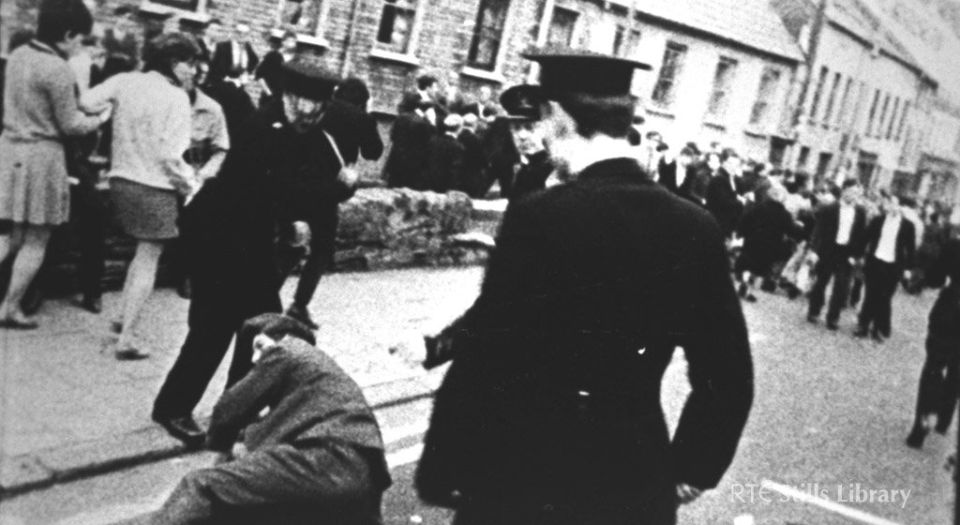 The left’s betrayal of Ireland’s ’68

When people in Derry rose up to challenge their sectarian rulers, they were condescended to by a British left fiercely loyal to the British state.

Writing on the eve of the annus mirabilis of 1968, John Berger commented on the politically numbing effect in Britain of two decades of post-war torpor (1).

In different places and times – Berger cites Ireland (1916), France (1940), Budapest (1956), Cuba (1959) – others had experienced ‘moments of truth’, episodes of ‘national and social crisis’ posing moral and political choices that defined the futures of individuals and of societies. By contrast, ‘we have lived through a period which must be reckoned as an exact and prolonged antithesis to a moment of truth’. As a result, writes Berger, ‘we find ourselves without a scale of standards for judging or assessing one another’ and remain prisoners of petty personal subjectivities.

Berger – writer, painter, art critic – was one of many talented intellectuals who became associated with the new left in the radical upsurge that reached its peak in 1968. ‘The dominant theme’, writes Tariq Ali in his memoir of the student protests and anti-Vietnam War demonstrations of the 1960s, was ‘a passionate belief that we needed a new world’ (2). In retrospect, it is clear that 1968 was not the ‘moment of truth’ – at least in Britain – that both earnest radicals and fearful reactionaries took it to be. As Ali observes, ‘a great deal about that period’ is ‘shrouded in mysticism and fantasy’. From the perspective of today, the events of 1968 marked the opening of the last act of the drama of class conflict unleashed by the revolutions of 1848 and the emergence of Marxism in Europe, a drama that reached its anti-climactic finale in the collapse of the Soviet bloc in 1989/1990.

Through fascism and war, postwar boom and Cold War conformity, the working-class movement was defeated and contained under the leadership of a conservative bureaucracy defined by the politics of Labourism and Stalinism. The rapid breakdown following May 1968 of links between radical students and militant trade unionists in France, where both could mobilise massive demonstrations, confirmed the inability of the new left to break the stranglehold of the old left and resolve the crisis of leadership. Though the radical upsurge of 1968 shook the confidence of Western elites, it remained fragmented and protesting students largely stayed apart from striking workers. The lack of political coherence or direction of the radical movement meant that its self-indulgent and individualistic features came to the fore and it never became a serious threat to the established order.

One place where people did experience a moment of truth in 1968 was Northern Ireland. On 5 October, police attacked a civil rights march in Derry with truncheons and water cannons, provoking the first major confrontation in a war that would continue for the next 30 years, causing more than 3,500 deaths. In the course of my final year at school in Sheffield, we had followed with great interest events in the USA and Vietnam, in Paris and London. But, coming from a family of Irish immigrants, in which the bulletins of the civil rights movement were a frequent topic of discussion, for me developments in Northern Ireland were of more immediate concern. In August 1969, I watched the British Army unrolling barbed wire barricades in Derry as it moved in to impose order after the Battle of the Bogside had raged for days in response to another sectarian incursion by the police.

Given the inherent sectarianism of the Northern Ireland regime, the demand for civil rights shook the state to its foundations. The fact that Northern Ireland was an integral part of the United Kingdom meant that disorder in Belfast and Derry was a direct threat to the authority of the British state. The ferocious response of the local paramilitary police to the civil rights protestors precipitated the sort of ‘national and social crisis’ for which Berger had yearned only the previous year. But when the challenge that a new generation of the left had long awaited finally arrived, it proved unable to rise to the occasion.

‘The left failed in Ireland’ is Eamonn McCann’s candid judgement on events in his home town of Derry in the late 1960s, events in which he was a prominent activist (3). In what remains by far the best account of this phase of the Irish Troubles – War and an Irish Town – McCann reveals the baleful influence of the old left on the republican movement and the inability of the new left to advance a coherent platform linking issues of sectarian discrimination and police repression to the partition of Ireland and the framework of British rule. The result was, he concedes, ‘confusion so total as to defy description’. When the formally ‘socialist’ Official IRA abandoned the defence of the Catholic community, the Provisional IRA emerged as the leading force in the resistance against state repression. As McCann explains, ‘the primary reason why the Provisionals exist is that “socialism” as we presented it was shown to be irrelevant. The Provisionals are the inrush which filled the vacuum left by the absence of a socialist option.’

In an early chapter in his reminiscences, Street-Fighting Years: An Autobiography of the Sixties, Tariq Ali recalls that a demonstration he organised when he was at school in Pakistan attracted support only from a few boys he characterises, with patrician condescension, as ‘street urchins’. Many in Derry would have used similar, if not more disparaging, terms in referring to a young man – 18 in 1968 and working in a butcher’s shop – who is credited by McCann for his command of the subsequent IRA campaign which ‘managed to bomb the city centre until it looked as if it had been hit from the air without causing any civilian casualties’.

Martin McGuinness, who famously failed his 11-plus and went on to become education minister, went on to become deputy first minister of Northern Ireland. As McCann acknowledges, the Provisionals became, ‘by any standards, a brilliantly efficient guerrilla army’, though in the ensuing war civilian casualties were numerous. Yet, whatever the military prowess of the Provisional IRA, the lack of anti-imperialist politics in the programme of Sinn Fein means that McGuinness (in partnership with the veteran Unionist leader Ian Paisley) presided over a society in which sectarian divisions are arguably more entrenched than they were 40 years ago. The legacy of 1968 in Ireland is not merely the failure of socialism but the betrayal of the historic republican aspiration to unite ‘Protestant, Catholic and Dissenter’.

If the left failed in Ireland, its failure in Britain was even greater. This failure is eloquently expressed in Tariq Ali’s account of a decade of engagement in anti-imperialist solidarity campaigns in Britain (in relation to South East Asia, Latin America, South Africa) in which Northern Ireland merits not a single mention. The New Left Review, the journal of the new left, of which Ali is a long-standing co-editor, similarly ignored the war in Ireland for almost its entire duration (4). In actress Vanessa Redgrave’s autobiography (in which Tariq Ali features less prominently than she does in his) she records a trip to Northern Ireland after the Bloody Sunday massacre in Derry in January 1972, in which she reveals a remarkable ignorance of Irish sensitivities by referring to ‘Londonderry’ (5). British left-wingers were so deeply imbued with loyalty to the British state – which many continued to regard as the potential agency of socialist transformation – that, though they sympathised with national liberation struggles in remote countries, they could not bring themselves to support a threat to the British state from within its own borders.

Of all the failings of the generation of 1968 in Britain, its evasion of the Irish question had the most enduring consequences. It gave the British state a (relatively) free hand to impose its rule in Ireland and, through all the demonstrations, strikes and sit-ins of the following years, a spirit of national unity against the Irish menace bolstered the British state at home.

This essay was originally published in 2008 in the spiked review of books.

War and an Irish Town, by Eamonn McCann is published by Pluto Press. (Buy this book from Amazon(UK).)

(2) Street-Fighting Years: An Autobiography of the Sixties, Tariq Ali, Verso 2005

(4) Pessimism of the Intellect: A History of the New Left Review, Duncan Thompson, Merlin 2007