...is the myth that May’s government is fighting to leave the EU at all. 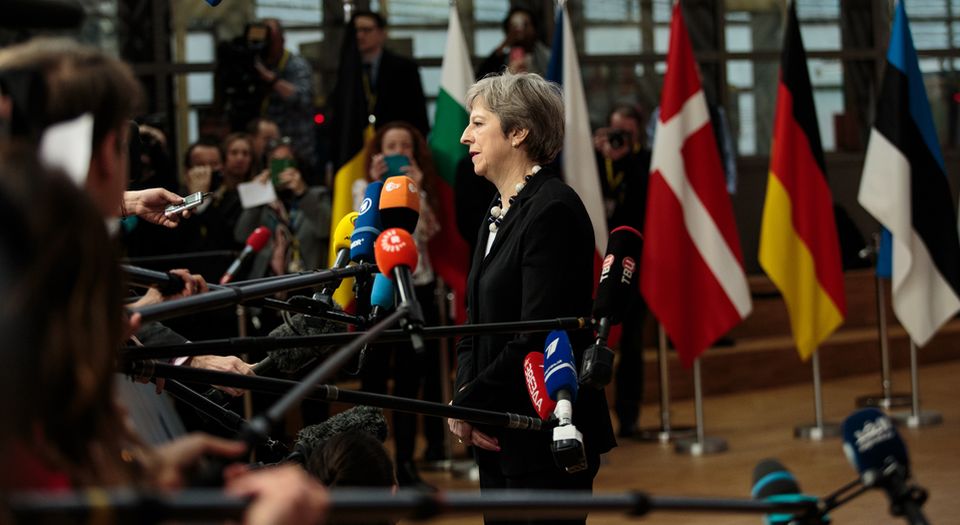 It’s one of the biggest myths in British politics: the nonsensical notion that Theresa May’s Tory government is wilfully hurtling headlong towards a ‘reckless hard/cliff-edge/kamikaze’ Brexit at all costs and despite all opposition.

This is the real ‘Tory Brexit lie’. The truth is far worse than that. May’s moribund Conservative government seems incapable of ‘hurtling’ towards anything. But it is creeping and occasionally lurching backwards, further away from the meaningful Brexit that 17.4million Leave voters wanted and ever-closer to a surrender that would mean accepting Remain by another name.

In the process, far from steamrollering unreconstructed Remainers, the Tories are giving succour to those elitists who would sabotage Brexit altogether, from the unelected, unaccountable House of Lords to its Brussels equivalent, the European Commission.

That is not how things might appear in media and political discussion. Prime minister ‘Brexit means Brexit’ May has vowed to overturn the 15 defeats which the Lords inflicted on her key Brexit bill; it is now reported that she will ‘confront’ and ‘stare down’ rebel Remainer Tory MPs before the crunch votes in the House of Commons.

May and her chancellor Philip Hammond have repeatedly assured us that, whatever critics in top political and business circles might say, the UK really is leaving the EU’s Single Market and Customs Union. That is a necessary part of any real Brexit, if we are to end obedience to Brussels’ rules.

Others now appear to accept that the Conservatives are the party of Brexit. Labour MPs and supporters urge their leader Jeremy Corbyn to endorse staying in the Single Market and effectively make clear Labour is a Remainer party, since ‘there is only one Brexit reality – and it’s a Tory one’ (New Statesman). Many voters seem to have drawn similar conclusions in the recent English local elections, where working-class Leave voters and ex-UKIP supporters went Tory while Labour did better in the Remain redoubts of the metropolitan middle classes.

Which all sounds clear enough. It is surely an iron law of political life, however, that we should judge people on what they do, not what they say about themselves. And while the Tory government might be talking a good fight for Brexit, in practice it is pursuing a policy of backsliding and defeatism.

The government said Brexit will mean Brexit, and we leave in March 2019. Then they quickly fudged what that might mean by agreeing a transitional period during which Britain will still be under EU rules – ie, not Brexit at all. That state of limbo is currently supposed to last 21 months. Many think – and some hope – it will be considerably longer. Once the principle of a clean break has been abandoned, who knows how long the piece of string might be that keeps Britain entangled with the EU?

The government says it is determined to overturn those Brexit defeats inflicted by the Lords. Yet so far it has seemed determined only to postpone the big Commons’ votes for as long as possible, frozen in a state of political fear and paralysis.

Yes, May and Hammond say the UK must leave the Single Market and Customs Union. Then they insist that, in practice, Britain will stay in a ‘customs partnership’ with the EU – a play on words which looks suspiciously like the Customs Union, which itself sounds like code for the Single Market.

That is clearly the way the wind is blowing, given the government’s acceptance of a ‘backstop option’ which, in the absence of a final trade deal, would keep the UK aligned with the EU’s Customs Union – and therefore in the shadow of the European courts – for a ‘limited period’, whatever that may mean. After all, 200 years could be a limited period compared to forever.

That ‘backstop’ was first proposed by the EC ostensibly to avoid a ‘hard border’ in Ireland; if there was no agreed trade deal, then Northern Ireland would effectively remain part of the EU Single Market. That, as we argued on spiked, would represent a flagrant violation of UK sovereignty – and of genuine Irish sovereignty, since the future of the border would be in the hands of EU bureaucrats.

At the time, May declared that no British prime minister could ever agree to such an imposition. Then she ignored her own bold words, and promptly did just that.

Let’s be clear: the ‘backstop’ option is designed to stop Brexit. It is part of the EU elites’ attempt to impose a sort of neocolonial settlement, where the UK might leave in name but remain under their sway. They have been encouraged in this by the May government’s willingness to kowtow, symbolised by reports that they have agreed to pay Brussels a £39billion divorce bill without obtaining any assurances in return – effectively signing a surrender without even losing a war.

As the eloquent Tory Leaver Jacob Rees-Mogg observed this week, by accepting the backstop the Tory government has all-but agreed to become a ‘vassal state’ of the EU. In which case, why should the EU want to offer any alternative deal? It is, said Rees-Mogg, ‘essentially a trap’. And it’s one that May, Hammond and Co have willingly walked or crawled into, with a signed blank cheque in their hands.

Leading Brexiteers in May’s cabinet, such as foreign secretary Boris Johnson and environment secretary Michael Gove, have belatedly begun criticising the Tory government’s backsliding. Yet they remain reluctant to follow through with a challenge to May that could jeopardise their party’s tenuous hold on power. The danger is that they could become her unwilling enablers, giving the appearance of firm backs in government while the softening and backsliding carries on.

Even Rees-Mogg, in his apparent attack on May this week, only concluded that things are now reaching the point where one might begin to wonder ‘whether the government really wants to leave at all’. Some of us reached that point in July 2016, when Theresa ‘Remainer’ May became prime minister weeks after the EU referendum.

Time for a reality check. Brexit has never been the Tory Party’s cause. Successive Conservative leaders have taken the conservative option of seeking to preserve the status quo. It was, after all, Margaret Thatcher who was one of the chief architects of European integration.

What was then called ‘Euroscepticism’ was largely seen as a cause of the eccentric right-wing fringe of the Tory Party. Even Boris Johnson showed few signs of supporting Brexit until it suited his leadership ambitions. It was not the Tories but the people who finally forced Brexit into the centre of politics, through the democratic revolt of the Leave vote in June 2016. The Tory government has since been forced to become the very reluctant voice of the referendum result.

It is perfectly right and fair to describe Corbyn’s Labour as effectively a Remainer party today. It does not necessarily follow, however, that May’s Conservatives should be seen as the Leaver party. Indeed one irony of Labour’s internal bunfight over ‘why won’t Corbyn back the Single Market?’ is that May’s vaunted customs partnership looks increasingly like the Single Market by stealth.

There is currently much talk of the technical and IT difficulties involved in creating a new system for customs and trade. But Brexit is not a technical problem. It is a problem of political will. The Tory government lacks the will to accept that Brexit must happen even without a deal – and definitely without a ‘backstop’. They are treating it as a private business matter to be resolved behind closed door with the EU bureaucrats. The 17.4million who voted not for backstops or soft borders, but for greater sovereignty and democracy, are excluded from the process.

Now there is also talk that the tensions within the Tory Party might finally bring down May and bring on another election. Even if that happened – and nobody in the political class really wants it – what automatic good would it do, when no party is fit for purpose in pursuing Brexit? Who represents the 52 per cent who voted Leave in a parliament where every party bar the small and much-maligned Democratic Unionists of Northern Ireland is led by those who backed the establishment’s Remain campaign?

True, a government led by Labour would be even worse and would ensure that the Leave majority was defeated. But truly winning the battle for democracy-through-Brexit looks likely to require the sort of political realignment that could leave old loyalties to zombie parties behind.