The ugly trade in Palestinian pain

Western liberals bear some responsibility for the violence in Gaza. 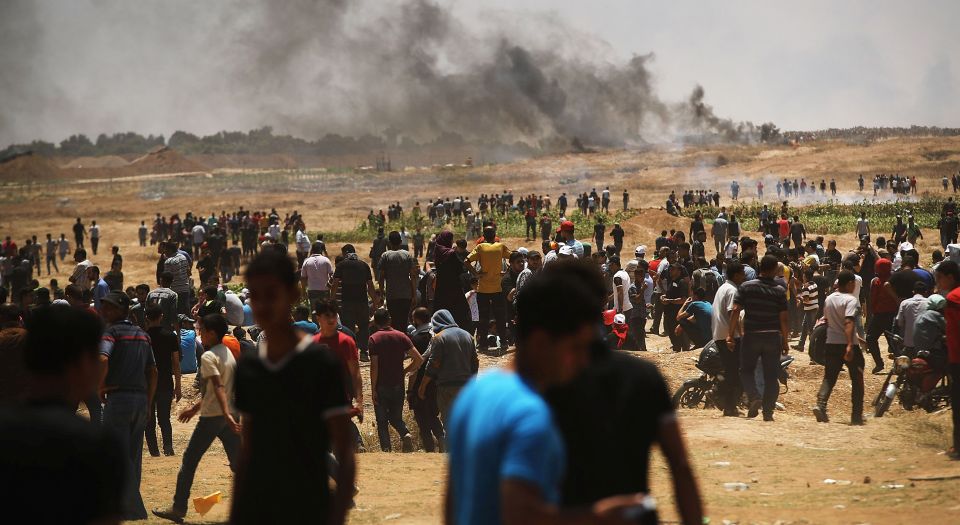 The Israel-Palestine conflict is unique among modern wars. No, not because Israel is an unnaturally wicked state, as its many critics across the West, and in the Middle East of course, would have us believe. And not because this conflict has been a long one. Or because it is a sometimes asymmetrical one, pitting a well-armed state against protesters armed with catapults and attitude. Many wars have been long and imbalanced.

No, this war is different because of who shapes it. Who impacts on it. Who contributes to it, usually unwittingly. This war is unique because very often its distant observers, those who watch and comment and hand-wring from afar, play a role in intensifying it and making it bloodier than it already is – without even realising they are doing so.

This should be the central lesson of the terrible events at the Gaza-Israel border last week: that much of what happens in the Israel-Palestine conflict is now largely a performance, a piece of bloody theatre, staged for the benefit of outsiders, especially for myopically anti-Israel Western activists and observers.

It is becoming increasingly clear that Hamas pushes Gaza’s people into harm’s way because it knows their suffering will strike a chord across the West. Because it knows images of their hardship will be shared widely, wept over, and held up as proof of the allegedly uniquely barbarous nature of the Jewish State. Hamas knows there is a hunger among the West’s so-called progressives for evidence of Palestinian pain, and by extension of Israeli evil, and it is more than willing to feed this hunger.

The clashes at the Gaza border, in which more than 60 Palestinians were killed and hundreds injured, cannot be viewed in isolation from Western liberals’ peculiar and disproportionate obsession with Israel. It now seems undeniable that this was no instinctive, grassroots protest, but rather one that was carefully orchestrated by Hamas. As a New York Times reporter described it, after midday prayers clerics and leaders of Hamas ‘urged thousands of worshippers to join the protests’. And Hamas’s urging was littered with false claims. It told people ‘the fence had already been breached’ and Palestinians were ‘flooding into Israel’. This was a lie. A Washington Post reporter details how Hamas’s leaders told people to keep attacking the border fence because ‘Israeli soldiers [are] fleeing their positions’. In truth, as Hamas knew only too well, the IDF was reinforcing its positions.

Israel had made clear, including in an airdrop of leaflets, that anyone who sought to dismantle the fence in Gaza, the de facto border between this part of Palestine and Israel, risked coming to harm. And still Hamas encouraged the protesters to strike at the fence. Still it sought to swell the angry ranks by pleading with people to go from their mosques to the border. Why would it do this? Why would the governing party of a territory knowingly put that territory’s citizens into serious danger?

This is the rub. This is the central question. And the answer is a disturbing one: Hamas does this because it knows it will benefit politically and morally if Palestinians suffer. It knows there is a market for stories of Palestinian pain, and it is happy to flood that market.

Writing in the New York Times last week, Matti Friedman, a former AP desk editor in Jerusalem, touched upon this trade in Palestinian horror. He said that during his years reporting from the Middle East he even developed a certain respect for Hamas’s ‘keen ability to tell a story’. Hamas’s great insight was to recognise that the vast majority of the Western media wanted ‘a simple story about villains and victims’, says Friedman. Most Western reporters and commentators weren’t interested in nuance and certainly not in any reading of events that might seek to understand the Israeli position. No, they wanted stories of ‘dead human beings’, made dead by ‘unwarranted Israeli slaughter’, says Friedman.

That is, they want a morality tale, in which all complexity is chased out in favour of providing readers with a binary story of good guys and bad guys, and providing themselves with the moral kick of feeling like the exposers of simplistic terrible horrors – all executed by Israel, of course. Friedman says ‘the willingness of reporters to cooperate with that script’ gave Hamas ‘the incentive to keep using it’. In other words, Western observers’ receptiveness to stories of villains and victims encouraged Hamas to keep providing such stories. And also, logically, to create situations in which such stories might actually, physically unfold: tense protests, for example, featuring heavily armed Israelis on one side – the villains – and Palestinians on the other: the victims.

What we are witnessing is the development of an almost symbiotic relationship between Westerners’ need for stories of Israeli evil and Hamas’s ‘keen’ desire to tell and possibly even assist in the creation of such stories. A key dynamic here is the growth of Western leftists’ myopic loathing for Israel. Israel has become the state it is positively fashionable to hate. It is boycotted by the right-on in a way no other nation is, including nations with worse track records of militarism (like the US) or which are more repressive than Israel (like China). Its military actions are protested against more passionately than any other state’s military actions. So Turkey killed hundreds of Kurdish people in Syria in recent months, and people in London and Paris and Washington did not take to the streets to complain. But as soon as Israel gets embroiled in conflict, out came the protesters, fuming, burning the Israeli flag.

Hating Israel has become a kind of negative moral framework through which many in the West now advertise their virtue. Being anti-Israel has become the baseline requirement for membership of the dinner-party circle. It’s one of the key ways liberals and progressives demonstrate their decency. This is why they must clog up their Twitterfeeds with images of Palestinian suffering and hashtags condemning Israel. This is why they must take to the streets over Israel in a way they never do over Turkish or Saudi militarism. This is why they will refuse to buy Israeli fruit or watch Israeli plays or movies. Because that’s how you show you are a clean, moral person: by being Israel-free, and Israel-hating.

And in order to sustain this simplistic moral framework, this framework through which many Westerners now make sense of their own morality and political outlook, proof of Palestinian suffering is frequently required. And in steps Hamas to provide it. On one side, Western moralists almost addicted to stories of Israeli nastiness, and on the other their dealers: Hamas.

Westerners’ obsession with this conflict, and with an infantile reading of it as evil vs innocence, has helped to warp the conflict itself. It has twisted its dynamic, helped to deepen it, and created a situation where Palestinian leaders know there is one surefire way to garner international sympathy for themselves and hatred for Israel: let Palestinians go into harm’s way.

Virtue-signalling on domestic issues might be irritating – in the international realm it becomes positively dangerous. The Western progressives currently crying ‘Why must Palestinians die like this?’ should take a look in the mirror every now and then, because this is the terrible truth: they are partly dying for your moral and political gratification.