What Marx and Nietzsche had in common

Neither should be held responsible for the excesses of their supporters. 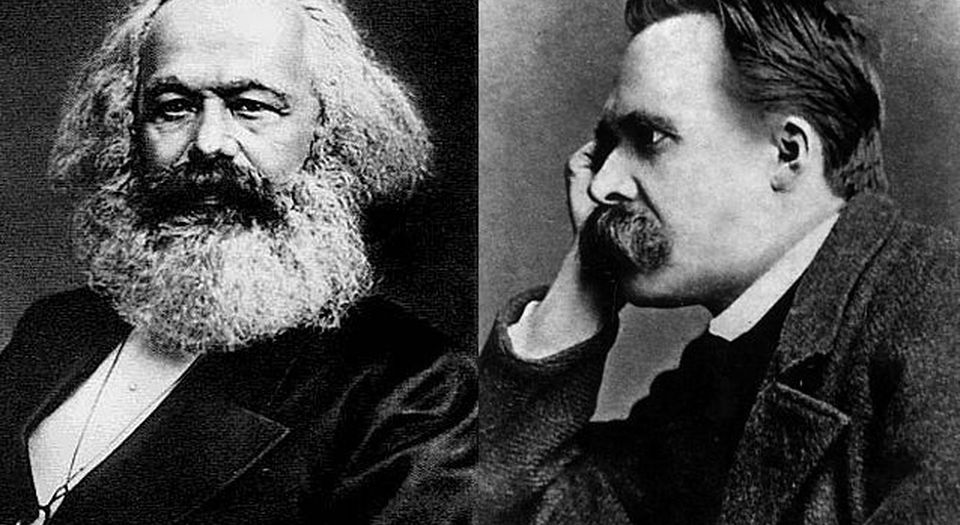 The two most influential political philosophers of the 19th century, Karl Marx and Friedrich Nietzsche, were on the surface diametrically opposed to each other. While Marx stood for reason, Nietzsche championed passion. While the former believed in the collective, the latter stood for the individual. Marx was a champion of the masses and the oppressed. Nietzsche loathed ‘the herd’ and believed that the lowest in society should be kept in check. Marx was for equality. Nietzsche was for hierarchy.

Yet they had much in common. Both were German, obviously, and both lived in exile – in England and in Switzerland and Italy. Both had money problems, suffered from ill-health, had duelling scars and imposing facial hair that has become their trademark. Both could write devastating polemics, yet the two never finished what they believed to be their definitive masterpieces: Capital and The Will To Power. Both were largely ignored in their lifetime, only for their work to achieve fame and infamy after they died. As Nietzsche’s most loyal friend, the composer Peter Gast, proclaimed at the Nietzsche’s funeral on 28 August 1900: ‘Holy be your name to all future generations!’ As Friedrich Engels announced at Marx’s funeral on 17 March 1883: ‘His name will endure through the ages.’

Ultimately, however, what unites them is a terrible tragedy. Marx and Nietzsche did attain posthumous acclaim, but it was a catastrophe for both in that their disciples were far less intelligent than these men of genius – and far more odious than both, too.

In the month in which we mark the 200th anniversary of Marx’s birth, which has generated polemics and angry tweets directed towards the man and his 20th-century legacy – in view of the tens of millions who perished at the hands of regimes professing to be Marxist – it’s worth reconsidering the gulf between the man and his disciples. As Frank Furedi reminded us at the weekend: ‘What passes for Marxism is really a caricature of Marxism. Was it not Marx himself who said, “All that I know is that I am not a Marxist”?’

For one, Marx never used the term ‘false consciousness’. Secondly, he wasn’t a monomaniac concerning class struggle and groups, as Marx believed in the development of the individual. His communalistic philosophy was underpinned by the very conviction that only in such a society could individuals achieve liberty and self-fulfilment. He and Engels wrote in the 1846 book The German Ideology: ‘Only in community [with others has each] individual the means of cultivating his gifts in all directions; only in the community, therefore, is personal freedom possible.’

More importantly, Marx wasn’t ‘anti-capitalist’ in the way the term is used by the McDonald’s-trashing activists of today. Marx believed capitalism had brought about untold progress and prosperity. In The Communist Manifesto (1848), he and Engels wrote about how capitalism had shown ‘what man’s activity can bring about’ and had ‘accomplished wonders far surpassing Egyptian pyramids, Roman aqueducts and Gothic cathedrals; it has conducted expeditions that put in the shade all former exoduses of nations and crusades’. But Marx also believed that time was up for capitalism and that it was imperative for society to move on to the next level, communism.

Most Marxist scholars are keen to draw attention to the difference between what Marx said and what has been practised under the banner of Marxism. Totalitarianism, labour camps, deportations and ethnic cleansing have little, if anything, to do with the writings and philosophy of Karl Marx. He ‘would have been appalled by the crimes committed in his name’, wrote Francis Wheen in his acclaimed 1999 biography of the man. ‘Not since Jesus Christ has an obscure pauper… been so calamitously misinterpreted.’

Just as Marx would have recoiled in horror at Stalinism, Nietzsche would have been aghast at the Nazis and their misappropriation of his writings. In the first place, Nietzsche loathed anti-Semites in whom he saw personified the malevolent spirits of resentment and envy. Anti-Semitism was the emotion for weak, lower people, for whom ‘someone must be to blame for the fact that I do not feel well’. In Human, All Too Human (1878), he wrote of how lowly men hated the Jews on account of ‘their energy and higher intelligence, their capital spirit and will, which accumulated from generation to generation in the long school of their suffering’, and that the success of this higher people ‘awakens envy and hatred’, making Jews ‘scapegoats for every possible public and private misfortune’.

He even contrasted the Jews favourably against his own (Christian) countrymen: ‘What a blessing a Jew is among Germans! See the obtuseness, the flaxen head, the blue eyes, and the lack of intellect in the face, the language, and the bearing; the lazy habit of stretching the limbs and the need of repose among Germans.’

Nietzsche hated not merely his fellow countrymen, but German militarism, too. This was the theme of one of his essays from the 1876 book Untimely Meditations, in which he rightly predicted that Germany’s victory in its recent war against France would lead to the rise of militarism in his country and a decline in its culture (and the corresponding opposite effect in France). As one English commentator wrote at the beginning of the First World War, a war which many in Britain blamed on the cult of Nietzsche in the early part of the 20th century: ‘Teutomania… was very far from Nietzsche’s heart and soul. It is the Prussian jingo’s heart wrapped in Nietzsche’s skin.’ (A Wolf, The Philosophy of Nietzsche, 1915.)

When Nietzsche employed the word Kampf, he didn’t mean armed struggle, let alone war – he meant personal struggle to rise above the oppressive opinion of others, to better oneself, to dare to become a better version of oneself. Nietzsche was an arch-individualist who would have been repulsed by rallies at Nuremberg, as they epitomised precisely the kind of herd mentality and unthinking collective behaviour he so deplored.

But can we exonerate completely Nietzsche or Marx from the crimes committed in their names by 20th-century fascist and communist regimes? While neither championed war or called for death camps, one could argue that they were, respectively, irresponsible and naive. Nietzsche was irresponsible for his use of martial language. His writings are infused with military metaphors and the pugnacious rhetoric of survival, with talk of ‘masters’ and their constant struggle against ‘degenerates’, ‘slaves’ and ‘the weak’. This was fodder for racists, eugenicists and power-worshipping fascists. Much of this bellicose invective features in a posthumous work which appeared by the name The Will To Power, a book based on unfinished notes or thoughts he didn’t feel happy with. It was a tragedy that this book – compiled by his sister, who married an anti-Semite and did become a Nazi – became one of the most keenly read by fascists in the 1920s and 1930s.

Marx, too, cannot escape censure on account of his naivety. As Edmund Burke had predicted of the French Revolution, if you base a new society under the delusion that the human character is essentially benevolent, and that, given a chance, people will cooperate and be altruistic, then the worst types will rise to the top and seize power. This is the lesson from George Orwell’s Animal Farm.

Like the French revolutionaries, Marx suffered from the misbelief that freedom and equality can go hand in hand, when they are actually competing opposites. The more you have of one, the less you can have of the other. In a free society in which people are left alone, some will become more successful and richer than others. Conversely, the only way to stop this from happening and maintain equality is for the state to forcibly redistribute wealth.

Irresponsible and naive, perhaps, but to blame Nietzsche for the Nazis and Marx for Stalinism is a grave error and a travesty. Instead we must blame their misguided followers and disciples. And from this, the lesson is clear: don’t be a disciple. Think for yourself. As Nietzsche himself exhorted: ‘I have no use for disciples. Let everyone be their own true follower.’

And, yes, I do see the irony in that.