Those extra few pints won’t take years off your life. 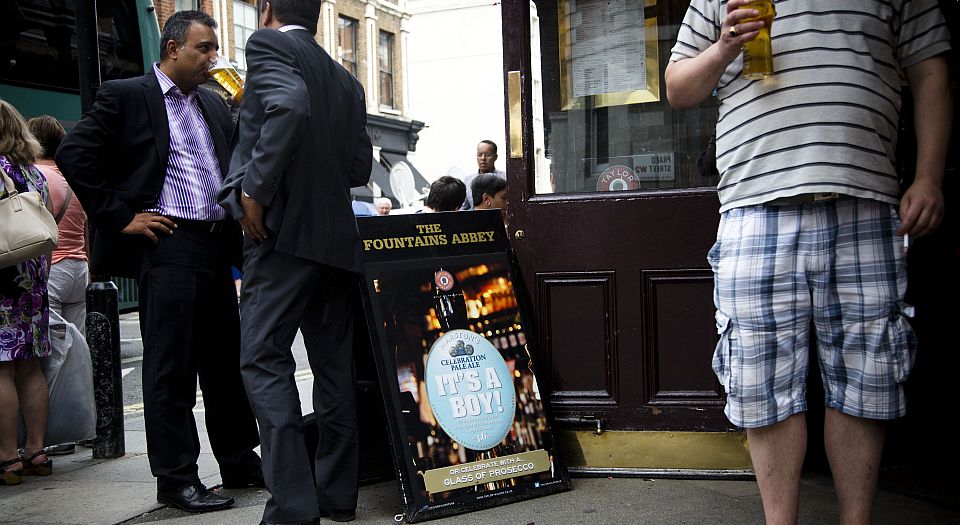 It has been widely reported that researchers have demonstrated that drinking more alcohol than the UK’s official guidelines could take years off your life. The news is based on a new study published in the Lancet, which brings together the results of 83 different studies covering over half a million drinkers. But the conclusions of the study seem at odds with the reporting of them. In reality, the study finds that drinking well above the current UK guidelines really isn’t very risky at all.

The study combines data from three large-scale data sources in 19 high-income countries and makes estimates of the increase in risk for every 100g (12.5 units) of alcohol consumed per week. The study includes data from 599,912 current drinkers. About half of the study’s subjects report drinking more than 100g of alcohol per week, and 8.4 per cent drink more than 350g (about 44 units) per week. For some perspective, 100g of alcohol is about five pints of regular lager (that is, about four per cent alcohol by volume) or five regular pub measures of wine. The relatively heavy drinkers consuming 350g of alcohol per week would be drinking over four bottles of wine or the equivalent.

The study’s findings suggest that in comparison to those who report drinking some alcohol, but less than 100g per week, those who report drinking between 100g and 200g per week have their life expectancy at 40 years of age reduced by six months. For those who drink 200-350g per week, the fall in life expectancy at 40 is estimated at between one and two years, and for those drinking 350g per week or more, life expectancy at 40 is estimated to fall by four to five years. The authors conclude that ‘data support limits for alcohol consumption that are lower than those recommended in most current guidelines’. Since the UK’s guidelines are to drink no more than 14 units per week, the implication is that even a meagre amount might be too much. (The US guidelines, for comparison, are about 25 units per week for men and 12 units for women.)

On the face of it, the reporting of the study seems to fly in the face of a well-established body of evidence that moderate drinking could be beneficial. In fact, the study actually confirms that conclusion. Firstly, the study separates out ex-drinkers, who could include reformed alcoholics and never-drinkers. Both these groups have substantially higher risks of premature mortality than moderate drinkers. Secondly, the increases in risk for every 100g of alcohol consumed are small – for example, 14 per cent for stroke, six per cent for coronary disease, excluding heart attacks, and 24 per cent for fatal hypertensive disease (ie, disease related to high blood pressure). By contrast, alcohol consumption was associated with a slightly lower risk of non-fatal heart attacks.

By comparison, the increased risk of lung cancer from smoking a pack per day is orders of magnitude riskier than drinking – not 10 per cent or 100 per cent, but around 1,000 per cent, maybe more. It’s clear that smoking causes lung cancer. It is far less clear that drinking alcohol is especially bad for us unless we drink a lot – at least three times the UK’s current guidelines.

Moreover, according to the graph above taken from the Lancet report’s appendix, never-drinkers have the same risk of an early death as those who drink around 40 units per week. Why there is such a big difference between never-drinkers and very light drinkers is something that would be worth investigating. Are there other things about never-drinkers, besides being teetotal, that cause a higher risk? In turn, this points to a more general problem with this kind of study: while drinking quite a lot is associated with negative health outcomes, is that due to reasons other than the chemical effect of alcohol on our bodies? All we can really say based on this study is that ‘the kind of people who drink a lot seem to die younger than those who only drink moderately and the relatively heavy drinkers die about as often as those who never drink at all’.

For some further perspective, Professor David Spiegelhalter notes that the study finds, in effect, that ‘each unit above guidelines is taking, on average, about 15 minutes of life, about the same as a cigarette’. The Guardian, to Spiegelhalter’s irritation, managed to convert this statement into ‘drinking is as harmful as smoking’. But the risk from smoking one cigarette per day is not particularly significant – it’s the fact that people have frequently smoked 20, 40 or even 80 cigarettes per day that makes smoking particularly harmful. And if someone is consuming 20 units of alcohol – two bottles of wine or eight pints of beer – every day, most people would agree that isn’t a good idea. But alcoholics aside, the vast majority of us are drinking at levels that shouldn’t really trouble us from a health point of view.

But let us take the study and its findings at face value for a moment. In short, drinking the equivalent of a bottle of wine four days per week might lose you a couple of years of old age. To avoid this risk, you could largely forego the pleasures of alcohol for decades, limiting yourself to no more than five or six drinks per week, and enjoy a longer spell of (possible) decrepitude. In other words, we might have to choose between years of enjoying alcohol in exchange for a slightly shorter period of old age. Everyone should be free to make that decision for themselves without the state interfering to ‘shape’ that decision for us – for example, by introducing minimum pricing for each unit of alcohol, as the Scottish government will start doing from next month. Personally, I enjoy a drink, and this study hasn’t changed my mind about the merits of alcohol one iota.