Why I’m pro-choice and anti-buffer zone

Those Ealing pro-lifers have the right to stand outside that clinic. 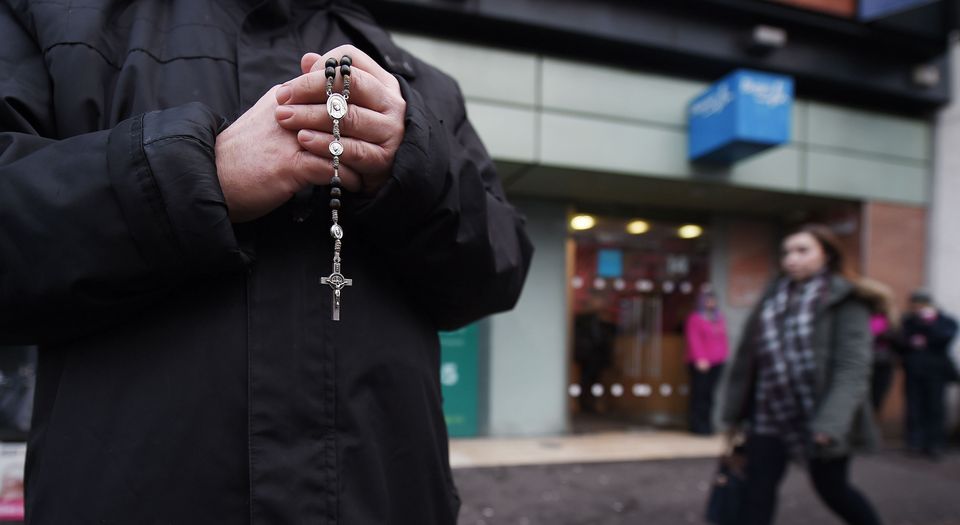 Judging by the press coverage, you would have imagined the scene of the Ealing abortion clinic to be one of carnage: protesters shouting ‘murderers’ at women, blocking their paths, throwing holy water, showing pictures of dismembered fetuses, shouting so loudly they could be heard from the consulting rooms.

When I visited, on a typical afternoon, the reality was somewhat different. There was one vigil member by the clinic gate, offering a leaflet to women entering and saying: ‘Would you like a leaflet? We’re here to help.’ There were two elderly women praying silently several metres away, with what looked like rosary beads, and a picture of the Virgin Mary. The street was so quiet you could hear the birds.

Most women entering the clinic ignored the leafleter at the gate; some said ‘no thanks’; some took the leaflet, but without looking at it, like it was an advert for pizza. In three hours, I saw only one person distressed by the presence of the protesters. This was a boyfriend waiting for his girlfriend, who said ‘no, I bloody don’t!’ when asked if he wanted a leaflet, and continued to shout that it was ‘outrageous that they were standing there judging women’. When his girlfriend came out, she grinned and slapped him on the back – ‘chill out, man!’ – and pulled him away.

Now, no doubt there have been incidents of harassment, and that these have been very distressing for some women. But this is not the habitual practice of the groups that are at the clinic six days a week. In fact, before they attend the vigil – and there is a rota – they have to sign a ‘statement of peace’, pledging that they will not harass, obstruct, or abuse clients or staff at the centre.

The Ealing group claims to offer financial support to women who choose to have the baby: it claims that some women are only seeking a termination for financial reasons, and that the group is currently paying for accommodation for several dozen women who decided to go ahead to have the child. Whether this is entirely true or not, it suggests that the protesters are not merely seeking to abuse or infringe, but (as they see it) to help the women, albeit according to their set of values.

Ealing Council used a Public Spaces Protection Order (PSPO) to ban the vigils, a power that can be used to ban any activity that the council judges to have a ‘detrimental effect on the quality of life’. After Ealing, another nine councils are considering passing a PSPO targeting abortion clinics.

PSPOs shift the question of criminality away from classical notions of crime – such as harm, serious nuisance, or obstruction – and on to the much vaguer notion of ‘detrimental effect’. What does ‘detrimental effect’ mean, after all, except for an activity that someone, somewhere, doesn’t like? This is exactly how the power has been used – to ban skateboards, busking, bird feeding, wearing head coverings, even lying down or sleeping in public.

In fact, the only acts that should be prohibited outside an abortion clinic are harmful acts, which would include obstruction, obscenity, assault, abuse and harassment. Such acts would interfere with a woman’s right to access healthcare, and obstruct the clinic’s lawful and valuable activity. They are also already prohibited, under various criminal laws.

Throughout the PSPO process, there has been a failure to distinguish between harmful and non-harmful activity. Pro-choice groups have submitted dossiers which include cases of alleged abuse alongside women’s testimonies saying merely that there were some vigil members standing outside the clinic. There is no distinction between abuse and someone who is merely standing or praying.

This is not a trivial issue. What was happening on the Ealing pavement was a conflict between two different sets of values. The first is the value of the sanctity of life, the inherent value of every human person, from conception. The second is that of a person’s autonomy and mastery over their body, with an unwanted pregnancy as a violation of a woman’s control over her body and life. Personally, I’m pro-choice. But the idea of the sanctity of human life is not entirely without merit or ethical value. (Indeed, judging by their testimonies, the women who have accepted the Catholic group’s help to have their baby are often religious themselves, and consider the group to have been ‘sent by God’ to the clinic gates, to save them in their hour of need.)

The pro-life protesters outside clinics are on the fringe of Catholicism; they are seen as the crazies, the uncouth ones, who spend eight hours a day in the rain handing out leaflets, being ignored. But perhaps these crazy people who hold their eight-hour vigils are the only ones who actually believe, truly believe, the Catholic doctrine.

After all, if you really thought that murder was occurring within a building, would you not try to stop it? Wouldn’t you do all you could – offer the woman rooms in your home, give them money, food, baby things, if this was what they needed to have the child?

I don’t agree with these protesters’ values. But if you have values that mean something, you may want to act on them – so long as you do not interfere with or obstruct others.

I disagree. On the streets of Ealing, there was an attempt by one person to appeal to another, according to their particular values. A woman entering the clinic is free to ignore them, or to tell them where to go, and she would be quite justified to do so. Or she may stop and talk, she may want to take their baby clothes. It’s up to her. This is precisely where free speech matters, and this is precisely what freedom looks like.

Josie Appleton is director of the Manifesto Club, which has been campaigning against the over-use of PSPOs for the past four years. She is also author of Officious: Rise of the Busybody State.