Joking about the Welsh or criticising black actors is the new limit to free speech. 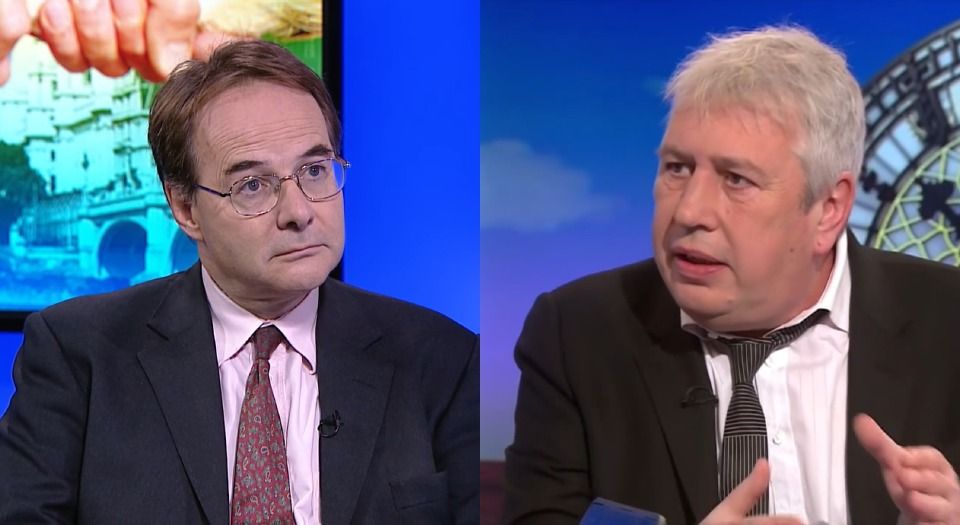 Anybody who thinks we exaggerate the threat to freedom of speech and of the press in the UK has not been reading the papers. But then, there is a vociferous lobby to deny you the right to read the ‘wrong’ journalists anyway.

Two leading columnists have been threatened with prosecution and bans this week, for the crime of expressing their ‘offensive’ opinions in the newspapers that employ them to do so.

Rod Liddle of The Sunday Times, the Sun and the Spectator has been reported to police and press regulators for making a ‘morally repugnant’ joke about Wales and its native tongue, with Welsh officials demanding new laws to ‘stop these comments… and to prevent language hate’. Meanwhile, the moral guardians of theatreland want Quentin Letts of the Daily Mail banned from writing reviews for his ‘blatantly racist attitude’, after the critic criticised a black actor in a Royal Shakespeare Company play.

The Middlesbrough-raised, Millwall-supporting Liddle, a Labour Party member for 40 years before he was suspended and then quit in a row over anti-Semitism in Jeremy Corbyn’s party, might appear to have little in common with Letts, a Cotswolds-born, public-school-educated Tory. Both, however, are reviled by Britain’s supposedly liberal cultural elites (the feelings are mutual) for their repeated failures to tow the Supper Party line.

This week’s attacks on these very different columnists reveal the underlying truth about the campaign to curb press freedom further in Britain. Whatever those leading it may claim, that campaign is not about upholding the rule of law, protecting the public interest or any other apparently high-minded principle. It is about silencing dissenting voices and thought-policing an increasingly conformist intellectual climate.

What offences did these offensive writers commit? Rod Liddle’s Sunday Times column included a short item on Welsh opposition to plans to rename the second Severn crossing the Prince of Wales Bridge. Liddle wrote (sensitive readers, look away now) that, ‘The Welsh, or some of them, are moaning that a motorway bridge linking their rain-sodden valleys with the First World is to be renamed. They would prefer it to be called something indecipherable with no real vowels, such as Ysgythysgymlngwchgwch Bryggy. Let them have their way. So long as it allows people to get out of the place pronto, should we worry about what it is called?’

Not perhaps the entertaining Rod’s best joke, and surely not his worst, but just a joke either way – albeit with a punchline shaped by an opinion, like every gag on a PC BBC panel show. The trouble was that Liddle’s joke expressed a politically incorrect opinion. To judge by the furious reaction his Sunday aside provoked, you might imagine he had been caught plotting to blow up the Severn Bridge to insulate England from invasion by moaning Welshmen.

The political and cultural establishment of Wales drew itself up to its full height, effectively to accuse Liddle of the crime of ‘Cymrophobia’ – hatred or fear of all things Welsh.

Liz Saville Roberts, member of parliament for the Welsh nationalist party Plaid Cymru (PC), demanded to know not only ‘[why] we should put up with this’, but also ‘what legal defence we have in situations like this’. Legal defences were needed, the PC MP implied, because ‘whether you describe this as racist or not, it is prejudice and is being used against us as Welsh people’.

As well as being reported to the newspaper regulator IPSO, Liddle’s column was shopped to North Wales police – a notoriously nit-picking force sometimes known as the ‘Taffy Taliban’. After ‘reviewing the material to ascertain if the matter should be taken further’, even they reluctantly concluded that there were no legal grounds for publicly flogging the heretic Liddle. Never mind such niceties, thundered Plaid’s North Wales police and crime commissioner, Arfon Jones, the column was not just ‘offensive and irresponsible’, but ‘morally repugnant and an absolute disgrace’ and should not be allowed.

The Welsh language commissioner (who knew?) Meri Huws, apparently speaking for many in Welsh officialdom, concluded that ‘offensive comments about Wales, the Welsh language and its speakers’ are ‘totally unacceptable’, and that something must be done to ‘stop these comments’: ‘Legislation is needed to protect rights and to prevent language hate.’

‘Language hate’? What madness is this? It is bad enough that we are faced with demands for ever-tougher laws against ‘hate speech’, to restrict free speech by outlawing any words which some find offensive. Now the thoughtpolice want legislation to curb speech which somehow offends against the Welsh language. As I am told they say in Wales, ‘Cachau Bant’!

The worst accusation any of them can realistically level against Liddle’s joke is that, as the Plaid MP says, even if you don’t think it’s racist, ‘It is prejudice’. Guilty as charged, perhaps. But let she who is without prejudice cast the first legal stone.

Surely everybody has their prejudices, whether it be against the Welsh or the English, Muslims or the Daily Mail, Jeremy Corbyn or Rod Liddle. So what? So long as we are talking about ‘offensive’ opinions rather than violent actions, that should be none of the law’s business. If they really want to make expressing ‘prejudice’ into a crime, the authorities will need a camp the size of Wales to hold the offenders.

If the outburst against Liddle demonstrates the rising demand for formal state censorship, the reaction to Quentin Letts’ latest theatre review in the Mail shows another threat to free speech today: the fashion for informal censorship by non-state players.

In his generally warm review of the Royal Shakespeare Company’s Stratford-Upon-Avon revival of a Restoration comedy, renamed The Fantastic Follies of Mrs Rich, Letts made some criticisms of the performances and casting. ‘Neither Solomon Israel nor Tam Williams’, he suggested, ‘is sexy enough as the male love interests… and poor Leo Wringer is miscast as the older Clerimont’.

‘Poor Leo Wringer’ is an established black actor, cast in a subplot to this play from 1700 as the elder Clerimont brother, ‘a scarcely house-trained [country] squire besotted by his hounds’. For Letts, ‘There is no way [Wringer] is a honking Hooray of the sort that has infested the muddier reaches of England’s shires for centuries. He is too cool, too mature, not chinless or daft or funny enough.’

Then came the ‘offensive’ question: ‘Was Mr Wringer cast because he is black? If so, the RSC’s clunking approach to politically correct casting has again weakened its stage product. I suppose its managers are under pressure from the Arts Council to tick inclusiveness boxes, but at some point they are going to have to decide if their core business is drama or social engineering.’

That might look like a professional critic doing his job: criticising the play and production by expressing an honest opinion, possibly ‘prejudice’ and all. As with all things in the theatre business, you pays your money and takes your choice. If you don’t like what a reviewer says you are free to disagree – or simply to agree with the actor Robert Lindsay (in response to an earlier row over a Letts’ review), that the critic in question is ‘not offering a sensible critique’ and so ‘should be ignored’.

Far from ignoring Letts’ short review this week, however, the keepers of theatrical correctness exploded. In what the Guardian called ‘unprecedented responses’, the artistic director and executive director of the RSC denounced the Mail man for expressing a ‘blatantly racist attitude to a member of the cast’ in his ‘ugly and prejudiced commentary’.

Actor Kobna Holdbrook-Smith of Act for Change – a lobby for diversity in the arts – not only condemned Letts’ ‘outrageous’ comments as ‘baldly racist’, but also suggested the Mail should have cut them out: ‘The fact that it goes unedited and uncontested is the real issue.’ Act for Change’s co-founder, the actor Danny Lee Wynter, even called on theatres to ban the likes of Letts: ‘They also need to come together collectively on who is allowed to write these reviews. It could be seen as censorship on one hand, but if somebody was racist to somebody else at work, the person who was the subject of the racism would be able to say “I want this person removed from their job or an appraisal carried out”.’

So the ‘free speech, but…’ lobby now even wants to colonise such areas of artistic expression as theatrical reviews. Accusing Letts of ‘blatant… bald… ugly’ racism simply for suggesting a black actor is ‘too cool, too mature, not chinless or daft or funny enough’ for a role seems a touch melodramatic. (Letts responded by accusing the RSC of throwing a ‘tantrum’ and affirming that he finds ‘colour-blind and gender-blind casting’ too often ‘counterproductive and patronising’.) It might seem even more far-fetched to equate a newspaper reviewer’s criticism of the RSC’s ‘clunking approach to politically correct casting’ with direct racist abuse in a workplace.

The potential consequences of this theatrical backlash, however, are serious. They are demanding that a critic should be censored or even sacked for writing a review that fails to meet with the artistic world’s official approval. Moreover, they suggest that theatres need collectively to rule ‘on who is allowed to write these reviews’ – effectively drawing up a blacklist of banned critics, with no prizes for guessing who would be at the top. Yes, it really ‘could be seen as censorship on one hand’. And on the other hand, too.

No matter what anybody’s opinion might be of any particular ‘controversial’ columnist, we must defend their right to express their opinions or abandon the fight for free speech. Nobody needs to pass a test set by the police commissioner of North Wales or the Royal Shakespeare Company to qualify for the right to be offensive. They might lack the good manners of the RSC or Rod Liddle, or the good taste of Plaid Cymru or Quentin Letts, but they still get the same liberties as the rest of us.

Censorship, whether formal or unofficial, is far more dangerous than any joke or jibe ever written. As the revolutionary Rosa Luxemburg reminded us a century ago, freedom is always for ‘the other fellow’. Even, shock-horror, if he happens to write for The Sunday Times, the Sun, or the Daily Mail.