Hat-gate and the victimology of Corbynistas

These people don’t understand how ridiculous they sound. 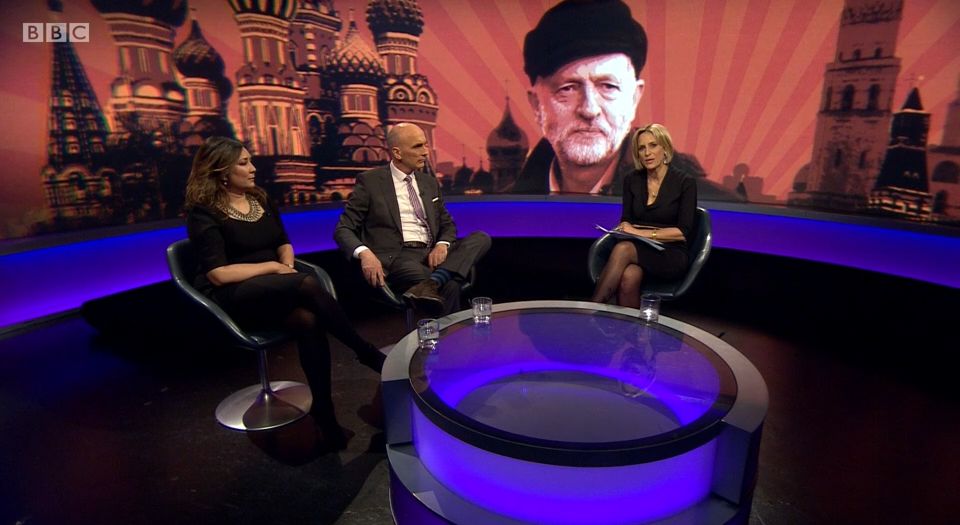 If you want a glimpse into the shrill victimology of media Corbynistas you need only log in to Twitter and search ‘Corbyn hat’. While the rest of us were cracking on with our weekends, leading Corbynistas were working themselves up into a strange rage over Newsnight’s use of a supposedly questionable graphic for a Thursday night discussion on the Labour leader’s comments on Russia, following the attempted murder of former Russian spy Sergei Skripal. The graphic had a picture of Corbyn, wearing his trademark cap, against an image of St Basil’s in Moscow. Corbynistas claimed his hat was Photoshopped to make it look more Lenin-ish, and the choice of backdrop was intended to make Corbyn look like a ‘Soviet stooge’.

Following spurious claims in the redtops recently that Corbyn was once an unwitting informant to Czech spies, and the long-running claims that this milquetoast social democrat is really a terrorist-sympathising threat to the nation, hat-gate has been held up as the latest example of anti-Corbyn bias in the media. MPs, commentators and supporters tweeted their rage and organised to complain to the BBC en masse. Owen Jones, Corbyn booster-in-chief, appeared on Newsnight on Friday, calling the media presentation of Corbyn’s views on Russia a ‘disgrace’ and slamming Newsnight’s choice of backdrop. ‘You even Photoshopped his hat to look more Russian!’, he said.

These people don’t understand how ridiculous they sound. And they sound more ridiculous still now that the Newsnight team have taken Twitter to defend themselves. Acting editor Jess Brammar points out that the hat wasn’t Photoshopped at all, it just had the contrast turned up a touch, and that the very same red-peril-esque backdrop was used for a discussion on defence secretary Gavin Williamson a few weeks ago. (Jones responded asking why they couldn’t have used a picture of Corbyn not wearing his hat.) What’s more, if you actually watch the segment, it’s pretty gentle on Corbyn: ally Chris Williamson defends him robustly, and the criticism of him, from New Labour adviser Ayesha Hazarika, is pretty measured. And yet the febrile tweets still flow.

The media has gone to town on Corbyn’s comments about Russia, despite the fact he’s been far more sensible than most. All he has said is that, while evidence points towards Russia having some involvement in Skripal’s attempted murder (given a Soviet-era nerve agent was used), we shouldn’t get ahead of ourselves. It is reckless to ratchet up international tensions over this before we have all the information. And the media seems to have fallen in line with those politicians in both parties talking up a new Cold War. But, as per, Corbynistas have shot well off the mark, their vast victim complex leading them instantly to the conclusion that there is some BBC-led conspiracy to take Corbyn down, with the Newsnight graphics department a primary weapon.

The mainstream media has in recent decades become almost inseparable from the political class, and thus it reflects its outlook. That’s why even Corbyn, someone who is hardly a radical, but nevertheless sits outside the incredibly narrow, technocratic consensus, has been on the sharp end of some shrill criticism at times. But much of the ‘anti-Corbyn propaganda’ often pointed to either hasn’t touched him, or can just be chalked up to ‘journalists reporting the news’. A much-cited study in 2016 claimed that three quarters of media coverage about Corbyn was negative, but this was the time in which the Blairites were in open revolt against him, giving journalists their new attack lines against the left-wing leader on a daily basis. As petty as that period was it was still newsworthy.

Part of the problem is that Corbynistas seem to want to rile and be embraced by the establishment at the same time. But they need to make their minds up. Either their Dear Leader is a radical threat to ‘vested interests’ – ludicrous, on the face of it, given he is now seen by many elite Remainers as the surest bet to stop Brexit – or he is a reasonable bloke who the meejah are determined to smear and to crush. Similarly, since the 2017 snap election, in which Corbyn turned in a better-than-expected defeat, there’s been much talk in Corbynista circles about new online media subverting the old, about the grip of the mainstream loosening. And yet Corbynistas still can’t help but wail at the MSM at the drop of an (allegedly) Photoshopped hat.

The great irony here is that in Corbynistas’ attempts to prove that they’re not too cosy with authoritarian regimes, they display an incredible authoritarian streak. In response to recent claims that he sold out Britain to Soviet spies in the Eighties, Corbyn threatened to sue a Tory MP and put out a mad-eyed video in which he said ‘change is coming’ to the media. The next day frontbencher Barry Gardiner explained what his boss meant: Labour would be pushing for measures that would force newspapers to sign up to a system of state-backed regulation, which was set up after the Leveson Inquiry but newspapers have so far refused to join. Corbyn may not be Soviet stooge, but his and his supporters’ instincts do reflect a strange sort of thin-skinned Stalinism-lite that would pose a real threat to liberty.